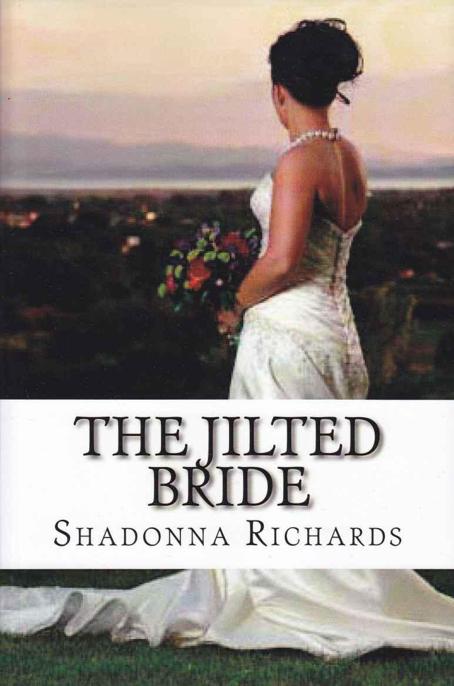 AN UNEXPECTED BRIDE
(BOOK ONE IN THE BRIDE SERIES)

"Her debut novel, An Unexpected Bride, has burst onto the scene, zooming up the bestseller lists and racking up fans faster than other writers racking

"Author Shadonna Richards has an "unexpected" bestseller on her hands with this unheralded romantic comedy....An Unexpected Bride has sold 10,000 copies in its first three months..."

"Shadonna Richards is a wonderful author!...It's a sweet and romantic story that will
sweep you off your feet."
-
REVIEWS BY MOLLY

(BOOK TWO IN THE BRIDE SERIES)

All rights reserved; no part of this publication may be reproduced or transmitted by any means, electronic, mechanical, photocopying or otherwise, without the prior permission of the publisher.

This book is a work of fiction. The names, characters, places, and incidents are products of the writer’s imagination or have been used fictitiously. Any resemblance to persons, living or dead is entirely coincidental.

Thank you, God for all my blessings. To my cherished son and husband for your unconditional love. With gratitude to my family and friends for your endless support. To Solomon, Jermaine, Merdella, Nesitta, Godwin, Monica, and Percell. To my editor M.M. for always being brilliant.

Jody Anders’ adoptive grandparents surprised her with a short one-day visit from New York and they can’t wait to meet Gregory, her wonderful new husband with whom she had eloped. Trouble is, she forgot to mention that he jilted her at the altar and is no longer in the picture. Now what to do? Turn to her hot, sexy  neighbour Jake whom she knows very little about? Will he pretend to be Greg her-would-have-been husband for the day?  This will be one night to remember or one to never forget.

Jake Anderson had always been attracted to his cute neighbour ever since she moved into his condominium building owned by his family—a secret nobody knows. When she propositions him for one night to pretend to be her husband—he’s determined to make her wish it were for real.

“
A woman has got to love a bad man
once or twice in her life to be thankful for a good one.”
~Mae West

“Darling, we’re here in Canada for our church’s annual one-day shopping excursion. We’re on the Highway 401. We thought we’d surprise you and Greg.”

Oh, she
was
surprised! More like shocked out of her wits. She pulled back her bangs in astonishment as she clutched the receiver in disbelief. She hadn’t seen her adoptive grandparents in more than a year since she moved to Toronto from New York. She told them she’d met Gregory—which she had, a real life prince charming and that he had proposed to her with a beautiful diamond ring. He had told he couldn’t wait to get married and wanted to elope now and then have a big wedding and invite family later. It seemed like a fairytale come true.

But then it turned out Greg wasn’t a prince charming, after all. He turned out to be a toad when she kissed him instead of the other way around like in fairytales—so much for prince charming and happily ever after. He also jilted her at the registry office—then had the nerve, would you believe it?  The nerve to call her later that evening to tell her he got tied up—on his wedding day! He should have  been tying the knot, not getting tied up by some other business. Arrgh!

She was too ashamed to tell them at the time—bless their dear hearts. Probably because she was too busy stuffing her face with a double serving of chocolate mint ice-cream and eating a whole coconut cream pie every day of the week afterwards.

She knew they’d be heartbroken after what happened to her and after her adoptive parents passed away the same year in a freak house fire. It would’ve been too much of a shock. They had even told her thank heavens she had happiness in her life at least. How could she tell them, her life was just as demolished as theirs were? That she’d suffered a different kind of  loss—a humiliating loss.

“Darling, are you still there?”

“What’s the matter, dear? You sound as if you’re not happy that we’re here.”

“Oh, no, Grams. It’s nothing like that. Nothing at all. I just…well….my place is a mess.” She gave a nervous chuckle as she felt her vein throb at her temple.

Well, actually, so is my love life but I really don’t want you to see that.

Her friends and family always wondered if the shy and sometimes insecure girl would find true love and happiness. She always felt she’d have to prove herself worthy because of her past. They all knew the story of how she came into the picture. She was abandoned on the doorsteps of a church in the middle of winter when she was eight months old. It had been all over the news. The thought that she was now abandoned at the altar—she could not face that ironic shame twice.

From that day forward she made a pact with herself. Her heart was now officially under lockdown from future perpetrators to protect it from any further harm that was done. Of course, her grandparents hoped they would live to see her get married and even have a child one day. So she really didn’t have the heart to squash their dream—not now in their golden years.

As much as she loved the Big Apple, she just had to take a bite out of another city and taste a new freedom. Far away as possible. So when a fabulous career opportunity came up in Toronto, she scooped it up faster than a tub of delicious ice-cream.

Well, she got the job up north and moved to Toronto to escape any reminders of her past and better herself—or was that to
find
herself? Here in Toronto, no one knew her as Baby X, the abandoned Christmas baby. Still she tried not to feel bitter about it. Maybe her real folks were desperate and on the run for their life…or maybe they were just crazy.

Then she met Gregory—a smooth talker who turned out to be a real fraud. Of course when he popped the question—the first time anyone asked her to walk down the aisle, she couldn’t wait to spread the good news. Of course, he didn’t walk down the aisle—he walked
off
the aisle! And the diamond ring! Whoa—what a beautiful ring he gave her—until the cops told her it was stolen!

She also found out that he was an illegal immigrant and wanted a fast way to stay in the country—he assumed she was a Canadian citizen. Well, he got it, alright. He had been in trouble with the law and they caught up with him. His
name
wasn’t even Greg. Boy, she really knew how to pick ‘em!

A knock on the door derailed her train of thought. She quickly hurried over to answer the door with her cordless in her hand pinned to her ear—she’d even forgotten that she wasn’t properly dressed. She had on a t-shirt that barely reached her thigh and fuzzy slippers on. But it was too late, her mind was all over the place with her surprise phone call and she’d answered the door anyway.

When she opened it, her jaw fell open, she almost melted.

“Hey, Jody, seems like the mail deliverer got us mixed up again.”     The deep silky voice and gorgeous muscled figure of her neighbour, Jake, stood at the door with some envelopes in his hand.

“Oh, um…thank you,” she said, squeezing the phone to her ear and her shoulder blade.

Jake Anderson was standing there, all firm and irresistible. He looked as if he just came from the gym in the condo complex and happened to by the mailbox on his way up. No matter how many times she saw him whether in the elevator or coming out of his apartment, butterflies caught in her tummy and her lips always spewed silly tongue-tied words instead of coherent sentences. Why did he have this affect on her? Still, thanks to Greg the Grinch, she was off men for now but no harm in admiring a man’s physique. Especially the one gracing her vision right now. He was sinfully sexy, tall, dark and….dear she think it…charming. Right now beads of glistening sweat moistened his hard abs. His sculptured body made her dissolve like warm butter in a pan.

There was something deliciously sexy about his soulful, penetrating eyes. He was a beautiful man. No doubt about that. He had on gym attire with a white vest with track pants and a towel slung over his shoulder. Gosh, a nice round nipple peeked through the vest of his muscular chest.

The Officer's Promise (Brothers in Blue Book 1) by K. Langston
Blackmailed by the Billionaire Brothers: The Complete Series by Sylvia Banks
Chrysocolla by B. Kristin McMichael
Sacrifice: The Queen's Blade by T C Southwell
Soldier at the Door by Trish Mercer
Diamonds Are a Teen's Best Friend by Allison Rushby
Outside The Lines:: Third Person Narration by Bella Love
Still the One by Lena Matthews
Uschi! by Tony Ungawa
Booked to Die by John Dunning