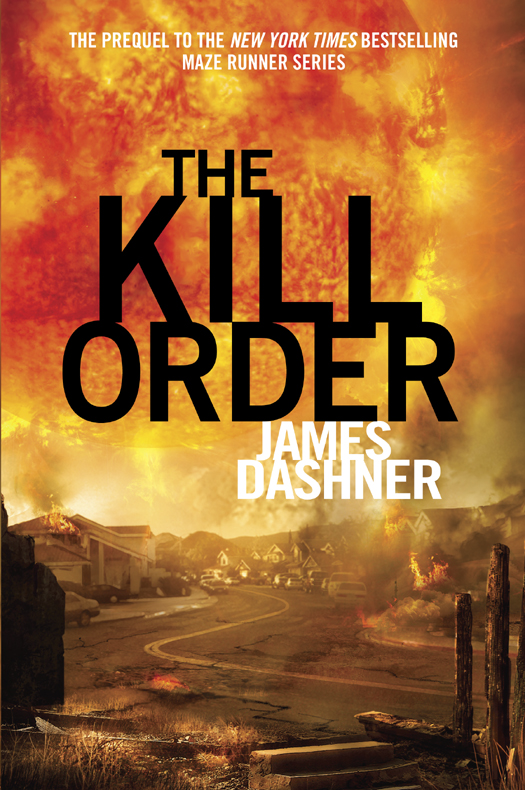 The prequel to the New York Times bestselling Maze Runner series.
Before WICKED was formed, before the Glade was built, before Thomas entered the Maze, sun flares hit the earth and mankind fell to disease.
Mark and Trina were there when it happened, and they survived. But surviving the sun flares was easy compared to what came next.
Now a disease of rage and lunacy races across the eastern United States, and there’s something suspicious about its origin. Worse yet, it’s mutating, and all evidence suggests that it will bring humanity to its knees.
Mark and Trina are convinced there’s a way to save those left living from descending into madness. And they’re determined to find it—if they can stay alive. Because in this new, devastated world, every life has a price. And to some, you’re worth more dead than alive.

The Maze Runner
The Scorch Trials
The Death Cure

For Kathy Egan.
I really miss you.

Teresa looked at her best friend and wondered what it would be like to forget him.

It seemed impossible, though she’d now seen the Swipe implanted in dozens of boys before Thomas. Sandy brown hair, penetrating eyes and a constant look of contemplation—how could this kid ever be unfamiliar to her? How could they be in the same room and not joke about some smell or make fun of some clueless slouch nearby? How could she ever stand in front of him and not leap at the chance to communicate telepathically?

And yet, only a day away.

For her. For Thomas, it was a matter of minutes. He lay on the operating table, his eyes closed, chest rising and falling with soft, even breaths. Already dressed in the requisite shorts-and-T-shirt uniform of the Glade, he looked like a snapshot of the past—some ordinary boy taking an ordinary nap after a long day at an ordinary school, before sun flares and disease made the world anything
but
ordinary. Before death and destruction made it necessary to steal children—along with their memories—and send them to a place as terrifying as the Maze. Before human brains were known as the killzone and needed to be watched and studied. All in the name of science and medicine.

A doctor and a nurse had been prepping Thomas and now lowered the mask onto his face. There were clicks and hisses and beeps; Teresa watched as metal and wires and plastic tubes slithered across his skin and
into the canals of Thomas’s ears, saw his hands twitch reflexively at his sides. He probably felt pain on some level despite the drugs, but he’d never remember it. The machine began its work, plucking images from Thomas’s memory. Erasing his mom and his dad and his life. Erasing
her
.

Some small part of her knew it should make her angry. Make her scream and yell and refuse to help for one more second. But the greater part was as solid as the rock of the cliffs outside. Yes, the greater part within her was entrenched in certainty so deeply that she knew she’d feel it even after tomorrow, when the same thing would be done to her. She and Thomas were proving their conviction by submitting to what had been asked of the others. And if they died, so be it. WICKED would find the cure, millions would be saved, and life on earth would someday get back to normal. Teresa knew this in her core, as much as she knew that humans grow old and leaves fall from trees in autumn.

Thomas sucked in a hitching breath, then made a little moaning sound, shifted his body. Teresa thought for a horrifying second that he might wake up, hysterical from the agony—things were inside his head doing who knew what to his brain. But he stilled and resumed the soft and easy breathing. The clicks and hisses continued, her best friend’s memories fading like echoes.

They’d said their official goodbyes, and the words
See you tomorrow
still rang in her head. For some reason that had really struck her when Thomas said it, made what he was about to do all the more surreal and sad. They
would
see each other tomorrow, although she’d be in a coma and he wouldn’t have the slightest idea who she was—other than an itch in his mind that maybe she looked familiar. Tomorrow. After all they’d been through—all the fear and training and planning—it was all coming to a head. What had been done to Alby and Newt and Minho and all the rest would be done to them. There was no turning back.

But the calmness was like a drug inside her. She was at peace, these
soothing feelings keeping the terror of things like Grievers and Cranks at bay. WICKED had no choice. She and Thomas—
they
had no choice. How could she shrink at sacrificing a few to save the many? How could
anyone
? She didn’t have time for pity or sadness or wishes. It was what it was; what was done was done; what would be … would be.

There was no turning back. She and Thomas had helped construct the Maze; at the same time she’d exerted a lot of effort to build a wall holding back her emotions.

Her thoughts faded then, seemed to float in suspended animation as she waited for the procedure on Thomas to be complete. When it finally was, the doctor pushed several buttons on his screen and the beeps and hisses and clicks sped up. Thomas’s body twitched a little as the tubes and wires snaked away from their intrusive positions and back into his mask. He grew still again and the mask powered down, all sound and movement ceasing. The nurse leaned forward and lifted it off Thomas’s face. His skin was red and marked with lines where it had rested. Eyes still closed.

For a brief moment, Teresa’s wall holding back the sadness began to crumble. If Thomas woke up right then, he wouldn’t remember her. She felt the dread—almost like panic—of knowing that they’d meet soon in the Glade and not know each other. It was a crushing thought that reminded her vividly of why she’d built the wall in the first place. Like a mason slamming a brick into hardening mortar, she sealed the breach. Sealed it solid and thick.

There was no turning back.

Two men from the security team came in to help move Thomas. They lifted him off the bed, hoisted him as if he were stuffed with straw. One had the unconscious boy by the arms, the other by the feet, and they placed him on a gurney. Without so much as a glance toward Teresa, they headed for the door of the operating room. Everyone knew where
he was being taken. The doctor and the nurse went about the business of cleaning up—their job was done. Teresa nodded at them even though they weren’t looking, then followed the men into the hallway.

She could barely look at Thomas as they made the long journey through the corridors and elevators of WICKED headquarters. Her wall had weakened again. Thomas was so pale, and his face was covered with beads of sweat. As if he were conscious on some level, fighting the drugs, aware that terrible things awaited him on the horizon. It hurt her heart to see it. And it scared her to know that she was next. Her stupid wall. What did it matter? It would be taken from her along with all the memories anyway.

They reached the basement level below the Maze structure, walked through the warehouse with its rows and shelves of supplies for the Gladers. It was dark and cool down there, and Teresa felt goose bumps break out along her arms. She shivered and rubbed them down. Thomas bounced and jostled on the gurney as it hit cracks in the concrete floor, still a look of dread trying to break through the calm exterior of his sleeping face.

They reached the shaft of the lift, where the large metal cube rested.

It was only a couple of stories below the Glade proper, but the Glade occupants were manipulated into thinking the trip up was an impossibly long and arduous journey. It was all meant to stimulate an array of emotions and brain patterns, from confusion to disorientation to outright terror. A perfect start for those mapping Thomas’s killzone. Teresa knew that she’d be taking the trip herself tomorrow, with a note gripped in her hands. But at least she’d be in a comatose state, spared of that half hour in the moving darkness. Thomas would wake up in the Box, completely alone.

The Cantaloupe Thief by Deb Richardson-Moore
Monster War by Dean Lorey
Three Wishes by Deborah Kreiser
Fallen Too Far by Mia Moore
Bad Men Do What Good Men Dream: A Forensic Psychiatrist Illuminates the Darker Side of Human Behavior by Robert I. Simon
10 Ways to Steal Your Lover by Dee Tenorio
The Ophelia Prophecy by Sharon Lynn Fisher
Pagan's Daughter by Catherine Jinks
Criminal Revenge by Conrad Jones
Scarred (Book 1, #1) by KYLIE WALKER