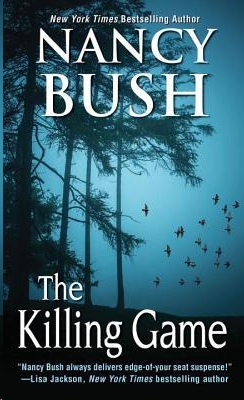 A jacket tossed over his shoulder, Luke followed Andi onto the porch and yanked the door shut. “What’s that?” he asked in a tight voice.

He was staring at the willow wreath she’d hung on the door, his willow wreath. Her heart clutched as she saw him gingerly pluck a white card from the ring of sticks.

“Another note?” he asked and her heart went cold. All the happiness she’d felt seconds earlier, the fantasies had shriveled.

Carefully, just touching the edges, he turned the card over.

Little birds should be careful whom they choose as a mate. Tsk, tsk. There is no such thing as faithfulness. Be careful. Seabirds can die, too.

Andi started quaking, deep inside. “What is this? Why are they doing this?”

“To scare you,” he said grimly.

“Our note writer is threatened by me,” he observed. “Not sure what he means about being faithless. Maybe he thinks our relationship has gone on longer than it has.”

“All this about birds. Trini and me ... and now seabirds?”

“Some kind of clue,” Luke said.

“It’s getting personal and he’s pissing me off.” That was true. The shivering inside her body, the fear, was morphing into anger. She was furious about what had happened to Trini, about her brother’s involvement, about creeping around and trying to terrorize her and now ...
now
bringing Luke into his sick, twisted game . . .

YOU DON’T KNOW ME

I like games. All kinds. Crossword puzzles, jigsaw puzzles, chess, Sudoku, Jumble, cryptograms, board games, video games, card games . . . I’m good at them. I’m also good at mind games. Deception, trickery, and lying come as naturally to me as breathing. There have been times when my emotions have taken over and nearly tripped me up, but now I have my rage and hate under control, for the most part. Still, emotions are part of the fuel that drives my favorite game: murder. Killing is the best game, by far. There is no comparison. The high that comes afterward is better than sex.

The first time I killed it was because someone had become dangerous to me. The second time was just to see if I could get away with it, and I did, and it left me miles above the earth, so far out of reach it was like I lived on a distant planet. Untouchable. King of the universe. I had to return to earth eventually with its banality, a hard landing. But then I began plotting and planning again, constructing more games in order to buoy myself into the stratosphere once again. The world is so gray and mundane without puzzles, twists, turns, and mysteries, without someone’s life balanced on a razor’s edge.

My latest game has begun. It’s about retribution and acquisition, but no one is to know. There’s some misdirection mixed in to the plot, to keep the cops at bay, and it’s got some moves my quarries will not expect. I’m really, really good. I tell myself to be humble, but it’s difficult. The only way to lose is to get caught, but that’ll never happen.

This one’s going to take a while, require a few extra steps, a few more deaths, but I’m into playing the long game. Makes the winning so much sweeter.

I’ve already made my opening gambit.

The ferry plowed across surprisingly rough gray waves, its running lights quivering against the black waters of Puget Sound. Belinda Meadowlark sat with a book at a table inside the upper deck, but though she read the same passage three times, it was Rob’s handsome face she kept seeing superimposed on the page. Unable to concentrate, she finally closed the hardback with a decided thump. It was a story about love and revenge, and she couldn’t see how the ending was going to be anything but disappointing. She lived for happy endings. Always. Maybe because she’d had so few of them.

But that had all changed when she met Rob. He was gorgeous and funny—did she say gorgeous? OMG! He was a god! He’d struck up a conversation with her at the bar in Friday Harbor the previous April. OMG! When she recalled the way he sought her out, it still caused a hot thrill to run right from her hoohaw straight up to her breasts. My, my. She could feel it even now, just at the thought, and her cheeks reddened and she looked around, almost certain someone would notice. She damn near had to fan herself.

But there were only a few people on the ferry tonight and the ones that were had stayed on the lower deck.

Rob . . . She smiled as she recalled the way his lustrous brown eyes had looked her over. “Do I know you?” he’d asked curiously, tilting his head in that way that made her want to grab him and squirm all over him.

Of course he didn’t know her. She was no beauty and she could stand to lose a few pounds, where he was casually handsome and looked totally fit. He’d been wearing short sleeves, even though it had been brisk with a capital BRRR the day he’d been standing outside the hotel, watching the passengers disembark from the last ferry. Belinda, who lived in Friday Harbor, had immediately tagged him as a tourist.

“I don’t think so,” she told him regretfully.

“I would have remembered,” she admitted, so suddenly wishing it were true. He looked good enough to eat and he smelled a little like Old Spice and something darker and muskier.

She goggled and gasped aloud in shock and delight. “Meadowlark!”

He grinned. “I remember now. You were pointed out to me at some event around here a year or so ago.”

She racked her brain, trying to think where she’d been that he would have seen her. “A year or so ago?”

“Right about then, I think.”

“I don’t know what that would be,” she murmured dubiously. “Maybe the clambake?” The owners of one of the restaurants near the harbor came from the East Coast and put on an annual clambake, adding salmon to the menu to make it more Pacific Northwest, but it was really kind of a small affair, and she’d only been there a minute or two before she had to leave.

“That sounds right,” he said after a moment of thought. “Well, what are you doing now? Can you have a drink? I’m buying.”

“Come back. I’ll be in the bar here.” He jerked his head in the direction of a small place called the Sand Bar. “I don’t know anybody else around here. My buddies all took off sailing, but I’m not heading home till tomorrow.”

“California. I’m based out of Los Angeles. I sell sports equipment up and down the West Coast.”

Belinda had immediately thought about the pounds she needed to lose and she’d been deeply embarrassed.

“Go on home,” Rob encouraged, “but come back. What do you like to drink? I’ll have one waiting for you.”

She didn’t drink, as a rule, but she didn’t want to seem unsophisticated, so she said tentatively, “A cosmopolitan?”

“Perfect.” He smiled at her again, a flash of white, then had headed toward the bar. She’d almost followed right after him, but she’d forced herself to go home first, then had looked in the mirror in despair. How could
he
be interested in
her
? It didn’t make sense. But then, he was just trying to pass the time and he’d seen her and knew her. It couldn’t be from the clambake, though. She wanted it to be, but she’d barely arrived at the beach when her mother had called and demanded she help with Grandpa, who was raising hell at the nursing home again.

Who cares?
she’d told herself at the time as she squeezed into her best jeans and the purple blouse, real silk, that made her breasts look good and had a sexy shimmer in dim light, which the Sand Bar had in spades. Sometimes it was so dark there you felt like you had to raise your hand to within an inch of your face to see it.

She’d hurried to meet him, slipping a little on the wet concrete walk that led to the Sand Bar’s front door, her new boots kind of pinchy and uncomfortable, but they looked good.

Inside, she’d followed the dull path of carpet to the darkened main bar where, luckily, a pink neon beer sign in the shape of a crab helped her make out some forms.

“Belinda!” Rob called, standing up at a table in the back of the room.

She threaded her way carefully toward him, decrying her bumpity-bump hips as they brushed the tables. When she neared him, he reached out and grabbed her arm, guiding her the last few steps to a black Naugahyde bench. He sat right down beside her, their thighs touching, and he turned on his phone and used it like a flashlight to show her her drink.