Read The Kingdoms of Terror Online

The Kingdoms of Terror 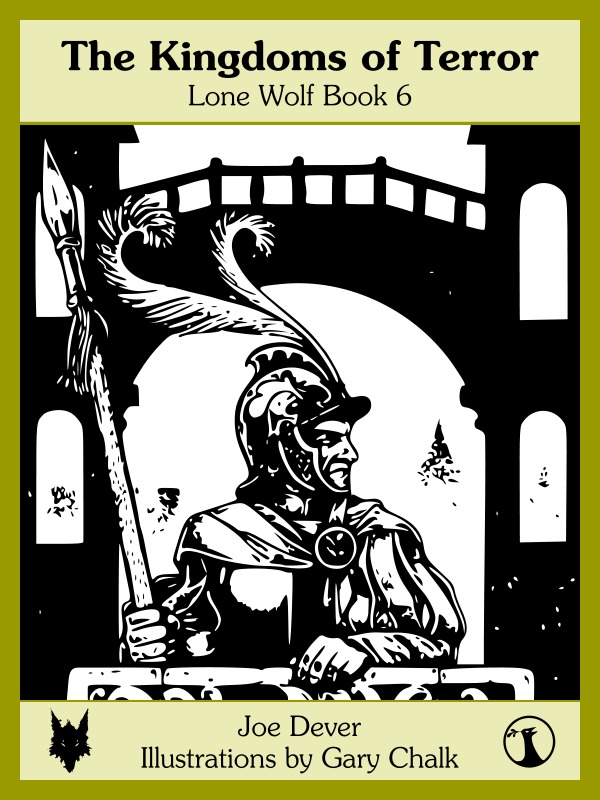 The Kingdoms of Terror

You are Lone Wolf — the last Kai Master of Sommerlund. Following your discovery of
The Book of the Magnakai
you have vowed to restore the Order of the Kai to their former glory. To achieve this, you must find the Lorestone of Varetta, a treasure which contains the secret powers of your warrior ancestors.

In
The Kingdoms of Terror
, you must follow a trail of ancient clues that will take you deep into the hostile Stornlands, where war, treachery, and intrigue will conspire to defeat your quest. Choose your weapons and your skills with care — the future of your country depends on it!

Joe Dever
, the creator of the bestselling Lone Wolf adventure books and novels, has achieved world-wide recognition in three creative fields — as an award-winning author of international renown, as an acclaimed musician and composer, and as a games designer specialising in role-playing games.

On graduating from college in 1974, Joe Dever became a professional musician, and for several years, he worked in the music industry in Europe and the United States.

While working in Los Angeles in 1977 he discovered a then little-known game called ‘Dungeons & Dragons’. Although the game was in its infancy, Joe at once realised its huge potential and began designing his own role-playing games along similar conceptual lines. These first games were to form the basis of a fantasy world called Magnamund, which later became the setting for the Lone Wolf books.

Five years later, in 1982 at the Origins Game Fair, Joe won the Advanced Dungeons & Dragons World Championships in Baltimore, an event held before 16,000 people. Inspired and encouraged by his success at Origins, Joe decided to quit the music business and devote his time to writing and games design.

In 1983, after a brief spell at Games Workshop in London, he wrote
Flight from the Dark
— the first Lone Wolf interactive gamebook. His manuscript immediately attracted a frenzy of interest from three major London publishing companies, all of whom bid for world rights. Joe accepted an offer of publication from Hutchinson's (later to become Century Hutchinson Ltd; now Random House UK) and
Flight from the Dark
was first published in 1984.

This first book sold more than 100,000 copies within its first month of publication, and overseas rights were snapped up by twelve countries (including the United States, France, Germany, Japan, Italy, and Sweden). The success of Joe's first book laid the foundations for the future of the Lone Wolf series, which has sold millions of copies around the world.

The Lone Wolf series ended after 28 books and 14 years. Joe has continued to work in the games industry as script writer and games design consultant.

Gary Chalk
, the illustrator of the early Lone Wolf series, was born in 1952, grew up in Hertfordshire, England. Being interested in history, he began playing war games at the age of fifteen. When he graduated from college with a Bachelor of Arts in design, Gary spent three years training in a studio before becoming a teacher in art and design.

Gary was working as a children's book illustrator when he became involved in adventure gaming, an interest which eventually led to the creation of several successful games. He is the inventor/illustrator of some of Britain's biggest-selling fantasy games including Cry Havoc, Starship Captain, and Battlecars (co-designed with Ian Livingstone). He is also known for his work on the very successful game, Talisman.

Gary was working at Games Workshop when Joe Dever asked him to illustrate some of his manuscript of
Flight from the Dark
. The two teamed up after that and they continued to work together until the eighth book in the series,
The Jungle of Horrors
.

Gary has also drawn the illustrations in
Redwall
and related books,
The Prince of Shadows
gamebook series, and several books which he also authored. Gary continues to enjoy war gaming and works as an illustrator and model maker.

Internet Edition published by
Project Aon
. This edition is intended to reflect the complete text of the original version. Where we have made minor corrections, they will be noted in the
Errata
.

To Philippa and Alison

‘I would be especially pleased if my granting of the rights to distribute my books in this way was seen as my “millennium gift” to all those devoted readers who have kept the Kai flag flying high, through all the good times, and the not-so-good. It would make me very proud indeed if this enterprise laid the foundations of a lasting legacy, securing the longevity of Lone Wolf by making my creation freely and readily accessible to current and future online generations. For them, for us, for Sommerlund and the Kai. … ’
Joe Dever

Project Aon would first like to thank Joe Dever for making this generous offering of the books that we have all loved from the beginning. We are also grateful for the generosity of Rob Adams, Paul Bonner, Gary Chalk, Melvyn Grant, Richard Hook, Peter Andrew Jones, Cyril Julien, Peter Lyon, Ian Page, Graham Round, and Brian Williams for contributing their portions of the world of Magnamund to Project Aon. We would also like to acknowledge the following members of Project Aon for their diligent work:

The Story So Far …

You are Kai Master Lone Wolf — last of the Kai Lords of Sommerlund and the sole survivor of a massacre that destroyed your warrior kinsmen during a bitter war with your age-old enemies, the Darklords of Helgedad.

Three years have passed since your triumph over the Darklord Haakon at the Tomb of the Majhan, and for the northern realm of Sommerlund, these have been three years of peace and prosperity. Since Haakon's defeat, the power of the Darklords has waned. Rumours abound that a civil war rages in Helgedad, as the lesser Darklords fight for power and dominion over the city. However, it is a widely held belief in Sommerlund that your discovery of the lost Sommlending treasure,
The Book of the Magnakai
, is the real reason for their power struggle.

The Book of the Magnakai
is legendary in Sommerlund. With the wisdom of the Magnakai, Sun Eagle, the first Kai Grand Master, instilled the disciplines into the warriors of Sommerlund that were to protect your land from devastation at the hands of the Darklords.
The Book of the Magnakai
was lost hundreds of years ago, but its wisdom was kept alive, handed down through generations of Kai so that they too could share the strength to resist their eternal enemies.

When you discovered
The Book of the Magnakai
, you gave a solemn pledge to restore the Kai to their former glory and so ensure the security of your land in the years to come. You returned to your homeland and, in the seclusion of your monastery in the hills, set about the study of the Magnakai Disciplines. It was an exacting task — a trial of physical strength and mental fortitude. The seasons came and went, but you were unaware of the passage of time, lost in your quest for the knowledge and the skills of your warrior kin. Three years of determined study pass, revealing the secrets of three of the Magnakai Disciplines. However, the others cannot be learnt by study alone, and in order to fulfil your pledge to restore the Kai, you must complete the quest first made by Sun Eagle over a thousand years ago. When he had finally completed his quest, he recorded all his experiences in
The Book of the Magnakai
, but the script has faded with the passing years and now few words remain to guide you.

‘Seek and find the Lorestone of Varetta, for this alone holds the power and the wisdom … ’ are the few words you can still decipher of the Grand Master's chronicle.

Although the verse is brief you are not without hope, for you recognize the name Varetta. It is one of the oldest cities of Magnamund, lying in the Stornlands beyond the Maakengorge, far to the south of Sommerlund. You realize that you must set out upon the quest without delay, for the war in Helgedad will not last indefinitely, and the Darklords swore long ago to conquer your country and destroy your people. As soon as their civil strife is resolved, the victorious lords of evil will turn on Sommerlund and summon the creatures of the Dark Realm to thwart your quest. You must therefore act quickly and with secrecy, for your life and the future of Sommerlund depend on your success.

And so, guided by the words of your ancient mentor and with the shadow of the Darklords ever present, you set out on the quest for the Lorestone of Varetta, unaware of the wonders and the horrors that await you in the Stornlands.

You keep a record of your adventure on the
Action Chart
.

During your training as a Kai Master you have developed fighting prowess —
COMBAT SKILL
and physical stamina —
ENDURANCE
. Before you set off on your adventure you need to measure how effective your training has been. To do this take a pencil and, with your eyes closed, point with the blunt end of it onto the
Random Number Table
. If you pick 0 it counts as zero.

If you have successfully completed any of the previous adventures in the
Lone Wolf
series
, Books 1–5, you can carry your current scores of
COMBAT SKILL
and
ENDURANCE
points over to Book 6. You may also carry over any Weapons and Special Items you have in your possession at the end of your last adventure, and these should be entered on your new
Action Chart
. (You are still limited to two Weapons and eight Backpack Items.)