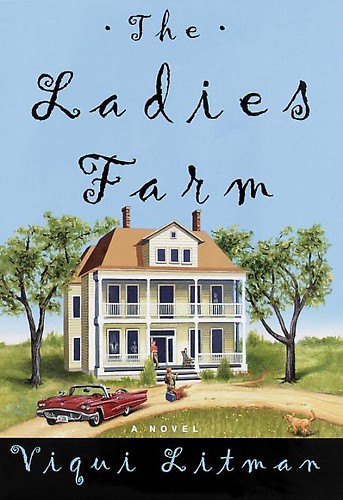 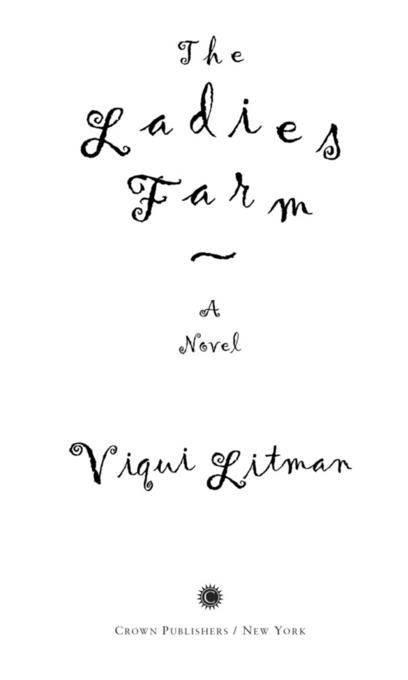 CROWN is a trademark and the Crown colophon is a registered trademark of Random House, Inc.

In Loving Memory of Martha Harris Litman and Fred Litman

Special thanks are due to the Every Other Tuesday Night Writers Group: Steve Copling, Deborah Crombie, Dale Denton, Jim Evans, John Hardie, Diane Sullivan, Rickey Thornton, and member emeritus Aaron Goldblatt—who slogged through this manuscript many times with patience and insight; our guiding light, Warren Norwood; the sustaining members near and far of the Ladies Lunch—Karen Brachman, Rebecca Isgur, Judi Preston, Sylvia Weiner, and Edie Yentis; my editor, the delightful and highly skilled Ann Patty; and my agent, the late Jane Cushman, whose judgment, guidance, and obstinancy made this book a reality.

O
h, joy! thought Della Brewer when Barbara Morrison pulled her red Thunderbird up to the curb in front of the Ladies Farm. My lover’s widow come to disturb my life in the country.

Della held her seat on the squeaky glider and concentrated on the
Times
editorial. She had a deal with Dave Eleston, who was kind of a Methodist ringer, singing in a Fort Worth church choir for their televised early service even though he lived in Sydonia and had never been a Methodist. Della prepared the ads for Dave’s Quick Stop, which ran weekly in the
Sydonia Tribune
. In exchange for this service, Dave brought the
New York Times
and the
Washington Post
back from Fort Worth every Sunday morning.

Della thought Dave drove the hour from Sydonia to Fort Worth and back again every Sunday just for the chance to catch a glimpse of Rita, his ex-wife, who operated the hair salon at the Ladies Farm and lived in the room over the solarium. Since divorcing Dave, she had remarried her first husband and only recently re-divorced him. Dave drew encouragement from this and spent as many hours as he could Sunday mornings after church sitting on the Ladies Farm porch, hoping Rita would spend a few minutes with him. But Sunday, as Rita reminded everyone, was the only morning she could sleep late without someone showing up with a hair crisis.

So after Dave had come and gone, Della lounged on the front porch with a carafe of coffee and several pounds of newspapers. Meanwhile, Rita slept, and the others—Pauline and Kat—having awakened early and breakfasted wisely, were out doing something useful. Which meant that Della would have to greet Barbara when she reached the porch.

She didn’t care, really. Richard had been dead over a year and, even when he’d been alive, Della had stopped hating Barbara. He stayed with Barbara because he wanted to, Della reminded herself. He wanted to be married to her more than he wanted to be with you.

But who wouldn’t? A rich, fat bitch, waddling up the walk in some sort of bronze silk pajamas, the sun glittering off her gold chains. She hadn’t even caught on that it wasn’t chic anymore to gold-plate the trim on your car. Let alone that really rich people drove a Lexus or BMW, not a Thunderbird, and that those cars were silver or white, not bright red. How could you not hate her?

Barbara looked up at Della on the porch and smiled. “Della, you look gorgeous. How do you do it?”

Della just hated her more. Why shouldn’t Barbara be kind? She had everything: the money, the house, the jewelry. She was Richard’s widow. Della was only his secret love.

Della smiled and leaned even further into the glider cushions. “Must be the clean country living,” she said as she did a quick inventory. Barbara was right about one thing: Della knew she looked much better than Barbara. I’m way thinner, she thought. My skin’s smoother. My eyes were always better. And I have the good sense not to make myself up like a circus performer. “Certainly not anything I do on purpose.”

Barbara waved her hand to dismiss the comment as false modesty, causing her bracelets to clank. She mounted the two steps and settled with a small groan into the cushioned rattan chair that, with the glider, formed one of the three conversation groupings on the porch.

Tiny eyes, Della thought. Glittering brown buttons surrounded by flesh. In younger days, Barbara’s porcelain skin had been set off by a head of shimmering chestnut hair, but even that subtlety had been abandoned for a mass of flaming orange, creating a vivid halo even on the shaded porch. Della rested the paper in her lap, but she did not speak again and a few seconds passed while Barbara settled in.

“So,” Barbara resumed the conversation. “What’s new with you?”

Della could not remember Barbara visiting the Ladies Farm. She must have visited Pauline and Hugh long ago, Della mused, when Hugh was still alive. But after Hugh died and Richard, in the role of concerned friend, asked Della and Kat to see if they could help Pauline turn the struggling bed and breakfast around, Barbara had not visited Sydonia. Of course, that was when Della and Richard became more than the coupled-up, PTA and Cub-Scouting friends they had been when their children were young; maybe Richard had discouraged his wife in some way from intruding upon this good deed that he and Della were performing together.

“Nothing’s new,” Della said evenly, warming with her memories. “That’s why I live out here. So life can go on undisturbed, day after day.” She smiled. Richard used to tell her that her smile lit up her eyes. Even now, especially now, she knew they were her best feature.

Annoyance flickered across Barbara’s face, then she returned the smile. “Life here agrees with you,” she said. “How’s Pauline? And Kat?”

Barbara sighed, closed her eyes, and leaned her head back until she faced the porch ceiling. Della sneaked one more look at the horoscope. Richard had been a Gemini and she invariably checked his as well as those of her two children, a Leo and an Aquarius. She glanced last at her own, but Barbara started to speak before Della could ascertain whether or not she was having a good day.

She remembered finishing a meal at a Chinese restaurant with Richard once, and picking up a fortune cookie. Richard had stayed her hand and gently opened her fingers to take the cookie. “Here,” he had said, picking up the remaining cookie from the plate. “This is your true fortune.”

His cool, smooth hand on hers, his eyes almost moist behind his glasses, the studious expression: All those were as real to Della as Barbara sprawling on the porch. Della saw the blasted pieces of the fortune cookie crumbling onto the tablecloth, she saw his forehead furrowing in concentration as she read aloud, she heard him laugh, and felt the warmth of her own blush as neighboring diners turned to stare.

But the fortune eluded her. Surely she had tucked the slip of paper into the tin box that held her most precious Richard Moments. Surely, in the packing and moving, her single apartment, her townhouse, and finally here to the modest bedroom and sprawling, windowed office of the Ladies Farm, surely in all that moving and cleaning out and discarding she had preserved her fortune. She just didn’t know where.

“You have a room for me?” Barbara jolted Della from her reverie. “You can check me in, can’t you? I want a room at the Ladies Farm.”

“W
ell, how long is she staying?” Kat demanded.

Pauline, pouring coffee, glanced quickly at Kat, then back to Della before she finished filling the third mug and set the carafe down on the oak tabletop. They were huddled in the kitchen, where Kat and Pauline had spread out the buttons they had collected in a morning of yard-sale shopping.