Read The Lair (The Margellos World Republic of Letters) Online

The Lair (The Margellos World Republic of Letters) 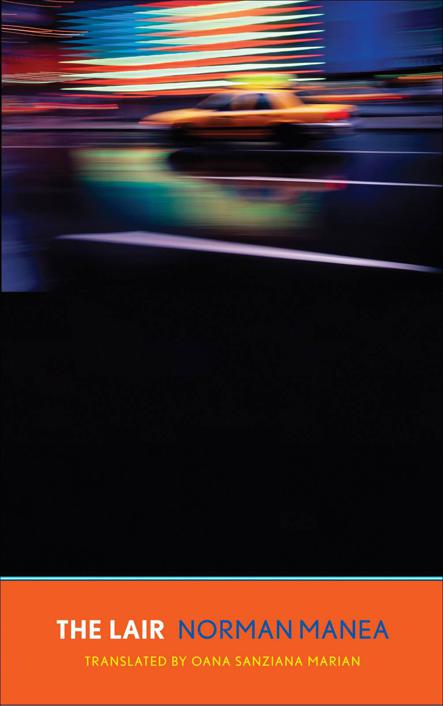 TRANSLATED FROM THE ROMANIAN

The Margellos World Republic of Letters is dedicated to making literary works from around the globe available in English through translation. It brings to the English-speaking world the work of leading poets, novelists, essayists, philosophers, and playwrights from Europe, Latin America, Africa, Asia, and the Middle East to stimulate international discourse and creative exchange.

Copyright © 2009 by Norman Manea.
Translation copyright © 2012 by Oana Sanziana Marian.
All rights reserved.
This book may not be reproduced, in whole or in part, including illustrations, in any form (beyond that copying permitted by Sections 107 and 108 of the U.S. Copyright Law and except by reviewers for the public press), without written permission from the publishers.

Set in Electra and Nobel types by Keystone Typesetting, Inc.
Printed in the United States of America.

This paper meets the requirements of ANSI/NISO Z39.48-1992 (Permanence of Paper).

A new morning, not yet opened. The long and powerful arm of a magician sets in motion the trick of the day. The yellow box stops at the curb’s edge. “Penn Station.”

Above the steering wheel, the mug shot and name of the driver: Lev Boltanski.

“I thought Odessa was in Ukraine.”

“The Soviet Union! Like me, Odessa is from the Soviet Union. Few people know the difference between Russia and Ukraine. You’re not American.”

No, it’s not exactly the beginning of the day … The day had started with the stranger whose small, white hand handed him an immaculately white card with gold letters.

“I wonder if you’d agree to appear in a television commercial. The pay is very good.”

The present! The present, mumbled the pedestrian. The new
motto of his life: the present. That was all: the present! In his past life, there was the guilty past and the gleaming future forever deferred. Now, however … he stood bewildered in front of the stranger who was reaching out a small, white hand to him.

“Don’t be alarmed. One question, that’s all. Just a question.”

It was a sudden confrontation. The approach gentle, but guarded.

The intruder is about forty years old. Long, beige mohair over-coat. Immaculately white shirt. No jacket. Short, black hair; black, reckless eyes. Rounded movements, like those of a dancer or a jester. He pulls a black leather wallet out of his jeans. He unfastens the magnet clasp and pulls out the business cards. He extends an immaculately white card, with an address in gold letters: the code of happenstance.

That’s what it says on the business card: James Curtis, producer. “I wonder if you’d like to appear in a television commercial. The pay is very good.”

“As a chess player.”

“Yes, something like that. A man concentrating on the game. At a certain point, he reaches for the glass on the table. Coca-Cola.”

“The pay is very good, as I’ve said. The ads go into syndication and the royalties come automatically. When you least expect it.”

“Think it over. You have my card. Call me. If you change your mind, give me a call.”

“Never say never, as we say here. You’re not American, isn’t that right?”

“Why wouldn’t I be? Do Americans not play chess? They drink Coca-Cola, in any case. And Pepsi. I don’t, but I’ve played my share of chess games. When I was younger.”

“See? I knew it. You look the part. Think about it. You have my number, call me. What’s your name?”

“You look the part!”

Peter the pedestrian mutters, abandoned on the corner of Broadway and 63rd Street.

That’s what the producer thinks, if he’s even a producer. A nice day, isn’t it, Dr. Koch? James Curtis, commercial producer, offered me the ad of the day, Doctor! And so, I looked into the Curtis mirror.

A step to the left, and another step. Once off the curb, he raises his hand. Taxi! The yellow cab stops at the curb’s edge.

Above the steering wheel, the mug shot and name of the driver: Lev Boltanski.

“I thought Odessa was in Ukraine.”

“The Soviet Union! Like me, Odessa is from the Soviet Union. Few people know the difference between Russia and Ukraine. You’re not American.”

“I am now. Just like you … Do you like it here on the Moon? The capital of the wanderers, lunatics, and sleepwalkers. Do you like it? A real wonder! One of 777 wonders of the world.”

Lyova is silent, but seems attentive.

“Manhattan Island, bought for a song in 1626 by a Frenchman, Minuit. For twenty-four dollars! He paid the Indians in glass beads. They were growing wild strawberries and grapes here, corn, tobacco. All around there were wolves and bears and rattlesnakes.”

Lev or Lyova listens, silently. He doesn’t ask anything, seemingly uninterested in the gregarious passenger. He drives slowly, relaxed, atypical for the New York taxi driver. He stops at 34th Street in front of the station, simultaneously turning off the engine and the meter.

The passenger rummages through his pants pockets: first the one, then the other. Next, his jacket. The two pockets of his pants, four of his jacket. He stammers; he doesn’t stammer.

“What’s that? What are you talking about?”

The mirror above the steering wheel. Look at that, we have a mirror, Doctor. Fate gave me a real mirror.

“Did you say something?” the Soviet-Ukrainian Russian asks.

“No, nothing. But I have no money. Two dollars! That’s all I’ve got. Let’s go to the bank. I’m sorry. I didn’t realize it. Don’t worry, I’ll pay for the trip to the bank. There’s an ATM on 28th, right there on the corner. A couple of minutes from here.”

Lyova peers at his passenger in the mirror, mumbles something in Russian, or Ukrainian. The taxi takes off. The bank is close by, on the corner of 28th Street. The passenger says nothing and waits. Lyova turns around, taking a closer look at the lunatic in the back seat. The mirror’s not enough; he wants to see the crook’s face.

“What’re you doing? Not getting out?”

“I really screwed up. What a mess. My ATM card is in my wallet. I’ve only just realized that I left my wallet at the library. The cafeteria. Or maybe at the doctor’s. I went to see a doctor.”

“You lost your wallet, with your ATM card in it. Is that what you’re trying to tell me?”

“I haven’t lost it. I left it somewhere. At the doctor’s or at the library.”

“Should we go there, then? Are you going to pay for this trip, too, with money you don’t have? Is that what you’re trying to do? Do we go to the library, or the doctor’s?”

“He wasn’t a psychiatrist. I don’t know where I forgot the wallet. Maybe at the library. Let’s go back to the station. I’m going to miss my train.”

“And the train ride is free, huh?”

“I’ve got a ticket already. I bought a round-trip ticket.”

“Aha, so we’re going back to the station. A free ride, eh?” He mumbled something in Russian, or Ukrainian. “Ah, no, I forgot; you’ve got two bucks. You’ll give me your last two bucks to get me going. The rest in colored beads.”

“I’m really sorry. Please forgive me. Look, here’s my MetroCard, with twenty dollars on it. Take it. I only just bought it today.”

“When? When did you buy it? Before the doctor or before the library?”

“I got it when I arrived at the station.”

“What am I supposed to do with a MetroCard? I don’t ride the subway.”

“Maybe someone in your family can use it?”

“Ah, so now you’re subsidizing my family! It’s probably used up. Or there are only two dollars left on it. So I’d be better off taking the two dollars in cash. Is that what you’re saying?”