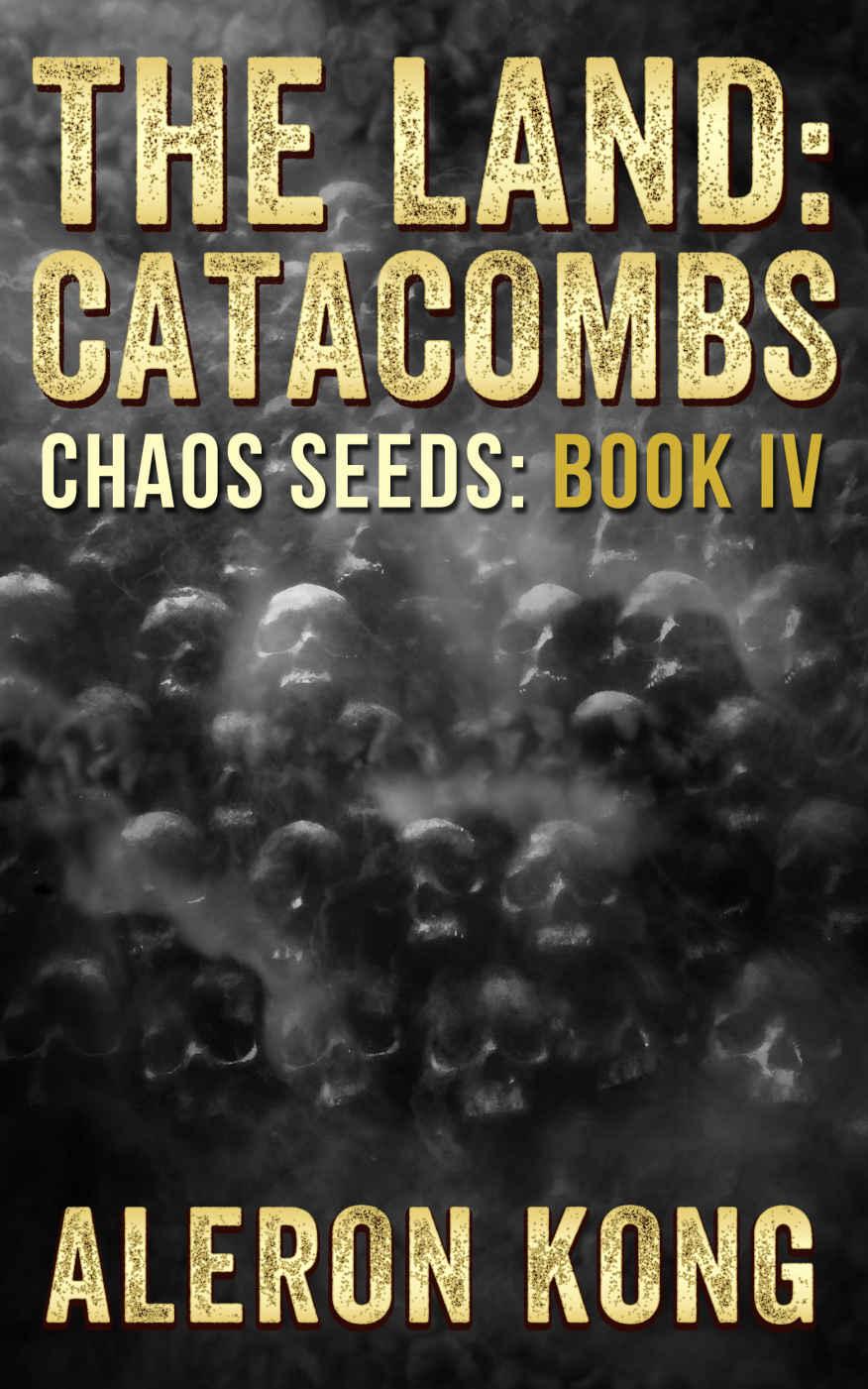 Hello dear readers.  Thank you so much for joining me once again.  As always, creating the latest edition of The Land has been a labor of love.  Like all true love, it was exhausting, demanding and exhilarating!  As some of you may know, I will be releasing a Version 2 of the first three books soon.  Book four, the very story you are about to journey through, is built upon the laws and rules of Version 2.  There will be NO major plot changes or twists, just a few mechanics issues to make everything a bit more fun.  For a complete list, look under the “News” section of my website.
www.LitRPG.com
.  For those of you now gnashing your teeth, lol, just think of it as an update for one of your favorite games.  Now, without further ado, welcome!  Welcome back, to The Land!.

This book is dedicated to my brother, Freddy Kong.  He is an amazing man, an inspiring father and my stalwart supporter through the years.  He is the heart of our family.  The one who reminds me to take a step back and be human.  I love you brother.

A self-published book by Aleron Kong

All rights reserved.  No part of this book may be used or reproduced in any manner whatsoever without written permission except in the case of brief quotations embodied in critical articles or reviews.

“Things are happening that we don’t know about!” Stridex spat.  The Exile was eight feet tall, small for one of his kind.  What he lacked in size, he more than made up for in intelligence and magical ability, however.  Though the other six members of the meeting were physically larger, it was Stridex who had gathered them.  “The Originals know something that they are not sharing!”

“The Originals always hide things from us.  Despite each of us having existed for millennia they only see us as their children,” Branit said.  He had no love lost for Stridex, but he couldn’t deny that the weasel looking Exile was able to increase soul traffic.

“This is different!” Stridex spat.  “We had been gaining several new souls a day from the nonhuman slave trade in Yves.  My agents worked for years to destabilize that kingdom!  Several months ago, almost all sacrifices stopped!  Even now the soul traffic is not at the level it was before.  I have spoken to others, and they have had disruptions of their interests in The Land as well.”

“Are we under attack?” another Exile asked.  Yaseg was a taciturn being.  One of the first generations of beings born of the Originals, he had been there in the first centuries of the Originals being locked away into this pocket Universe.  “Has the Light Court found a new way to oppose us?”

Arborene, an Exile whose powers focused upon psychic manipulation and divination, spoke up, “It is not the Light Court.  I have been able to detect that their operations are being disrupted as well.  It is also not an attack, at least not a direct one.  It is more like the number of random events in The Land has been increasing exponentially.  It first started several months ago, and it is increasing in frequency.  A small number of these events have even worked in favor of the Dark Court, but again that seems to be just a random consequence.”

“So how can we guard against this?” Yaseg asked.  The nonhuman sacrifices in Yves had recently become the most profitable means of soul traffic for the small cabal.

Stridex’s rat like face twisted into a sadistic smile, “I have already taken care of that.  I have dispatched a group of higher level agents to discover who or what is responsible for the disruption of our interests in Yves.  The plague squad will find the one who has opposed us,” Stridex looked around at the cabal, “and will make them suffer!”

You have been offered a Quest:
Long Live the King I
.  Long ago, the kobolds of the Depths were ruled by the Khan caste.  In a bloody coup, all of the known Khans were slaughtered.  Since that time, kobold society in the Depths has devolved into what it is today.  Will you help to restore this scion to power? Reward: Unknown. Yes or No?

Before Richter could choose “Yes” or “No,” a flash caught his eye.  He minimized the prompt and saw that the box had started to vibrate.  Lines of white light appeared at the edges and then the side panels began to peel back, somehow now flexible like a banana peel.  Richter did a fist pump in the air and said, “Yeah baby!  Gimme whatcha got!”

The panels completely fell back, making a wooden “X” on the table.  In the center of the box was a pedestal that held a large egg.  As he watched, the egg began to vibrate, and the sound of scratching could be heard.  A look of utter horror crossed Richter’s face, and he shook his hands rapidly back and forth. “No, no, no, baby!  Don’t gimme whatcha got!”

The smallest of cracks appeared in the shell, and as eloquent as ever, Richter said, “SHIT!

Okay, this is bad.  This is bad, right?” Richter asked to no one in particular.

More scrabbling could be heard from inside the egg, and the crack widened slightly.

“How the hell do I turn this thing back on?”  Richter grabbed the wooden panels of the stasis box and tried to push them back together.  The egg stirred again on its pedestal, but thankfully stilled after that.  He didn’t know how much more time he had before a baby dinosaur would be running around his conference room, but he wanted to avoid it if possible!

He finally got the strangely flexible wooden sides to stand up into a tower again, but only by holding it with two hands.  It completely resisted his attempts to make the four edges stick together.  He heard more scrabbling, and his heart started racing.  In a flash of insight, he realized he had some rope in his Bag.  He could tie the sides together!

In a brighter flash of insight, he realized that using rope was a fucking moronic idea.  He might as well try asking a stripper for her real number… it just wouldn’t work!  More scratching came from the box in his hands and almost made Richter consider trying the rope idea, dumb or not, but then his hand brushed the disc he had attached to the box.  Maybe that was the key to making the box work again.

Holding the box together with one hand, he tried to use his fingertips to pry the silver medallion off.  It didn’t come loose, but a prompt appeared.

Do you want to reactivate Stasis Box?  Yes or No?

“Yes!” Richter cried as he selected the prompt.

Know This!  A soul stone is required to reactivate the enchantment.

Richter heard a very distinct crack.  “Shit!”  Still keeping one hand on top of the box to keep the sides from falling, he reached into his Bag and accessed the inventory screen.  He grabbed a weak soul stone.  Placing it to the medallion, he tried to remove the silver disc again.

The soul you have supplied is insufficient to reactivate the enchantment.

“Gah!”  Richter dropped the glowing stone and reached back in his Bag.  He pulled out a basic stone and tried again.

The soul you have supplied is insufficient to reactivate the enchantment.

The box vibrated in his hand as the egg rocked on its pedestal.  “Come on, man!” Richter cried aloud.  Why did he have to waste one of his better soul stones?  It wasn’t fair!

Even as Richter complained to himself, he could see his family shaking their heads and calling him cheap.  He wasn’t cheap.  He was… thrifty.  “If you went swimming with sand in your hand, it would still be dry when you got out of the water.”  Yeah, his cousin was an absolute fucking riot.

Not wasting any more time, he reached in and pulled out a common soul stone.  If this didn’t work, he would have to try the higher stone he got from killing the crystal guardian or, Whedon forbid, the special stone he had received from killing the crypt mistress.  Placing the multifaceted common stone against the medallion, he accepted the prompt “Yes” again, and finally got a good result.

The wood panels firmed and no longer seemed to want to slip out of Richter’s grasp.  Lines of white light appeared at the four edges.  They flared brightly, and then the medallion fell away.  Once again, Richter could see the three “S” symbol that had been beneath the activation disc.  He was about to examine the box when another prompt appeared.

Know This!  You have reactivated the enchantment on the Stasis Box.  The egg within was in the process of hatching, however, and the protective shell has been compromised.  Previously, the egg of the Khan would have remained viable for millennia.  Now, the enchantment will only be able to preserve the life within for one hundred and three days.  If you do not reopen the box before then, the life inside will be terminated.

Richter read the prompt and then dismissed it.  He held the box up to his ear and listened for a solid minute.  When he didn’t hear anything scratching to get out, he breathed a sigh of relief.  Whew, he thought, that had been a close one.  It wasn’t like he was afraid of a small baby kobold, but he was deathly afraid of the responsibility it would mean.  What if he had blinded it by having it born in a room with so much light?  What if it
had
attacked him immediately?  Good god!  What if it had tried to suckle him?  He shivered involuntarily.

Richter was just relieved that he had bought himself some time.  He would be able to get some advice from Sumiko and hopefully Hisako.  In the meantime, he had to keep the box safe.  He gingerly placed it in his Bag along with the activation medallion.  He would have to remember to ask Randy about the three S’s.  His chamberlain was a fount of knowledge, and the man just might be able to add some light to this situation.

A flashing icon in the corner of his vision reminded him that he had never actually accepted the quest that appeared when he triggered the Stasis Box.  Not really seeing a downside, he chose “Yes.”  After all, what was in this egg just might be the key to him conquering the first level of the catacombs.  He wasn’t sure exactly how a baby kobold would help, but at least now his options were expanding.

Richter looked at the remnant, “Futen, what time is it?”

“More than an hour before midday, my lord.”

“Good.  Then it’s time for me to do something I’ve put off for way too long.  I’m completely knackered.  I need some sleep.  Wake me in five hours.”

Richter packed the items from the secret kobold compartment, as well as the bugbear ranger’s weapons, back into his Bag.  Then he looked around the conference room once more, and seeing nothing out of place, he took the first advice his mother ever gave him.  He went to bed.