Read The Land of Stories: The Wishing Spell Online

The Land of Stories: The Wishing Spell 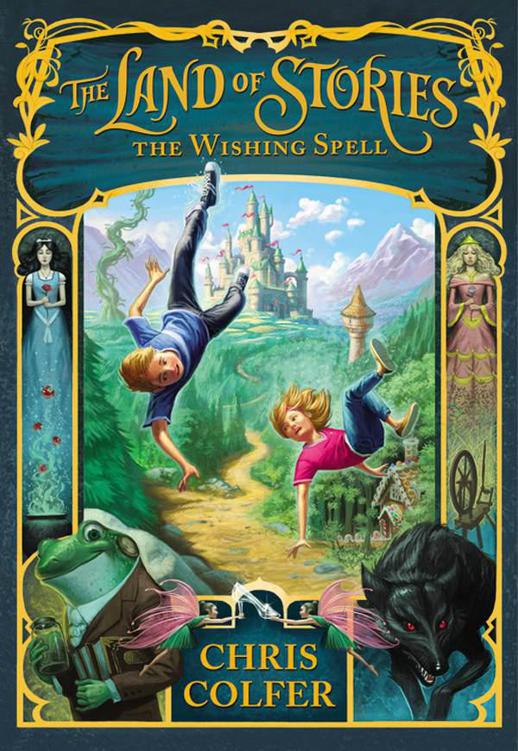 To Grandma,
for being my first editor
and giving me the best writing advice
I’ve ever received: “Christopher,
I think you should wait until you’re done
with elementary school before worrying
about being a failed writer.”

T
he dungeon was a miserable place. Light was scarce and flickered from the torches bolted to the stone walls. Foul-smelling water dripped inside from the moat circling the palace above. Large rats chased each other across the floor searching for food. This was no place for a queen.

It was just past midnight, and all was quiet except for the occasional rustle of a chain. Through the heavy silence a single set of footsteps echoed throughout the halls as someone climbed down the spiral steps into the dungeon.

A young woman emerged down the steps dressed head-to-toe in a long emerald cloak. She cautiously made her way past the row of cells, sparking the interest of the prisoners inside. With every step she took, her pace became slower and slower, and her heart beat faster and faster.

The prisoners were arranged according to crime. The deeper she walked into the dungeon, the crueler and more dangerous the criminals became. Her sights were set on the cell at the very end of the hall, where a prisoner of special interest was being watched by a large private guard.

The woman had come to ask a question. It was a simple question, but it consumed her thoughts every day, kept her lying awake most nights, and was the only thing she dreamed about with the little sleep she managed.

Only one person could give her the answer she needed, and that person was on the other side of the prison bars ahead.

“I wish to see her,” the cloaked woman said to the guard.

“No one is allowed to see her,” the guard said, almost amused by the request. “I’m on strict orders from the royal family.”

The woman lowered her hood and revealed her face. Her skin was as pale as snow, her hair was as dark as coal, and her eyes were as green as a forest. Her beauty was known throughout the land, and her story was known even beyond that.

“Your Majesty, please forgive me!” the stunned guard
apologized. He quickly bent into an overly pronounced bow. “I wasn’t expecting anyone from the palace.”

“No apology necessary,” she said. “But please do not speak of my presence here tonight.”

“Of course,” the guard said, nodding.

The woman faced the bars, waiting for them to be raised, but the guard hesitated.

“Are you sure you want to go in there, Your Highness?” the guard said. “There’s no telling what she’s capable of.”

The guard began turning a large, circular lever, and the bars of the cell rose. The woman took a deep breath and continued past them.

She journeyed through a longer, darker hallway where a series of bars and barriers were raised and then lowered after she walked past them. Finally, she reached the end of the hall, the last set of bars was raised, and she stepped into the cell.

The prisoner was a woman. She sat on a stool in the center of the cell and stared up at a small window.

The prisoner waited a few moments before acknowledging the visitor behind her. It was the first visitor she had ever had, and she knew who it was without looking; there was only one person it could be.

“Hello, Stepmother,” Snow White replied with a nervous quiver. “I hope you are well.”

Although Snow White had rehearsed exactly what she
wanted to say, she was now finding it nearly impossible to speak.

“I heard that you are the queen now,” her stepmother said.

“So, to what do I owe this honor? Have you come to watch me wither away?” her stepmother said. There was such authority and power to her voice; it was known to make the strongest of men melt like ice.

“On the contrary,” Snow White said. “I’ve come to understand.”

“To understand
what
?” her stepmother asked harshly.

“Why…” Snow White hesitated. “Why you did what you did.”

And with this finally said, Snow White felt a weight lift off of her shoulders. She had finally asked the question that had been so strongly on her mind. Half of the challenge was over.

“There are many things about this world that you don’t understand,” the stepmother said, and turned to look at her stepdaughter.

“That may be,” Snow White said. “But can you blame me for trying to find some sort of reason behind your actions?”

The recent years of Snow White’s life had become the most scandalous of the kingdom’s royal history. Everyone knew the story of the fair princess who’d taken refuge with the Seven Dwarfs while hiding from her jealous stepmother. Everyone knew of the infamous poisoned apple and the dashing prince who had saved Snow White from a false death.

The story was simple, but the aftermath was not. Even with a new marriage and a monarchy to occupy her time, Snow White found herself constantly wondering if the theories of her stepmother’s vanity were true. Something inside the new queen refused to believe that someone could be so malicious.

“Do you know what they’re calling you out there?” Snow White asked. “Outside these prison walls the world refers to you as the
Evil Queen
.”

“If that is what the world has labeled me, then that is the name I shall learn to live with,” the Evil Queen said. “Once the world has made a decision, there is little anyone can do to change its mind.”

Snow White was astonished by how little her stepmother cared, but Snow White needed her to care. She needed to know there was some humanity left in her.

“They wanted to execute you after they discovered your crimes against me! The whole kingdom wanted you dead!”
Snow White’s voice faded to a faint whisper as she fought off the emotions building up inside her. “But I wouldn’t allow it. I couldn’t…”

“Am I supposed to thank you for sparing me?” the Evil Queen asked. “If you expect someone to fall at your feet and express gratitude, you’ve come to the wrong cell.”