THE OCEAN AT WAR 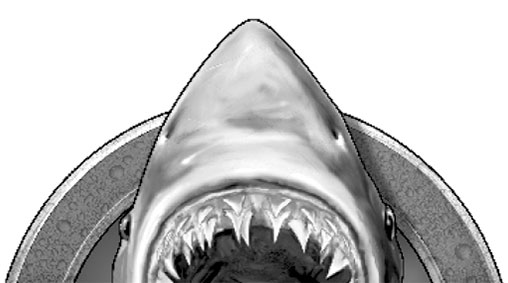 GRAY REACHED OUT WITH HIS SENSES AND
zipped forward in the cold water to the massive forest of staghorn coral. It was immense, its branches reaching toward the chop-chop. He turned and in a blink was at the other side of the formation. Using sharkata, Gray could travel the hundred yards between the two ends in a fraction of a tail stroke. Shar-kata was a sharkkind martial art known and mastered by only a very few.

Unfortunately Gray wasn't one of those few.

Most of the time he could travel well and create shields, but that was about it. He couldn't consistently use the power of the waters and bend it to his will or turn it into a destructive force like a true master. Instead, Gray relied on his own natural speed and strength as a megalodon. His species had gone extinct from the oceans millions of years ago. But underneath the Big Blue, below even the deepest part of the Dark Blue, were the Underwaters. This was a pocket of ocean unchanged since the time of Tyro, where jurassic sharkkind and dwellers still lived. Gray had come into the Big Blue from the Underwaters when he was just a pup.

Now, many years later, the jurassics that lived there were threatening the Big Blue.

Gray tried to make light of his shar-kata shortcomings as Takiza shook his head. “I
have
been practicing, I promise. But apparently practice doesn't always make perfect.”

Takiza Jaelynn Betta vam Delacrest Waveland ka Boom Boom was his full name and he was a tiny betta, or Siamese fighting fish. Takiza, though a small fish,
was
a shar-kata master. He flicked his billowing, rainbow colored fins, annoyed. “And apparently, sometimes practice doesn't even make barely sufficient. Yes, I can see that while I was away you continued re-learning to swim quickly in a straight line. That will be ever so helpful if Hokuu and Grimkahn decide to hover directly in front of you.”

Grimkahn was the mosasaur king, a seventy foot ocean crocodile, who wanted to conquer the Big Blue. And Hokuu had been Takiza's own master. He was an evil frilled shark, thirty feet long with a dangerously spiked tail that could split even the thickest skull. It was Hokuu who had freed Grimkahn and his forces to menace the Big Blue. Just as Gray was Takiza's apprentice, Takiza had been Hokuu's. But that was before the frilled shark had turned evil.

While his master wasn't impressed, Leilani was astonished. The AuzyAuzy spinner shark had never seen Gray use his shar-kata powers. “That's incredible! I mean, I've heard of shar-kata, the legends, how could you notâbut to actually watch it in action, wow!”

Gray smiled at Takiza. “See? I got a wow from her.”

“Is that why you chose to bring Leilani to the training area?” Takiza asked. “To impress her? How nice.”

It seemed to be sheer coincidence that Takiza had passed by this side of Fathomir, but Gray knew the betta far too well to believe that. And he kind of
was
trying to impress Leilani, but of course he would never admit to it. Takiza had returned from searching much of the ocean for Grimkahn and his jurassic horde and found nothing, which was troubling. The mosasaur king wanted more than anything to rule the ocean and send Gray to the Sparkle Blue. But after Gray had miraculously defeated Grimkahn and the jurassics at the Battle of the Spine, they had disappeared into the depths of the vast ocean.

Leilani swished her tail. “With respect, Takiza, that's not fair. I know he's been practicing a lot and this is the first time he asked me along.”

“It gets boring by myself,” Gray said.

“This is serious,” Takiza said. “You must progress or you will never defeat Grimkahn and Hokuu.”

Leilani added, “The Eyes and Ears have nothing new to report either. And BenzoBenzo has been listening carefully to everything.” BenzoBenzo was a giant deep sea blowfish and the head of AuzyAuzy's spyfish unit, the Eyes and Ears. “We do know that Grimkahn
did
return to the Underwaters, though.”

Takiza stared thoughtfully at them both. “Yes, but we don't know if they've come back.”

“We would know if they were in the Big Blue,” Gray said, trying to stay positive. “You would have found some sign. Hopefully they'll think better of trying anything after the whipping we gave them last time around,” he added, emphasizing his words with a fin slash.

“I hope you are right,” the betta told them. “I really do. But you should not trust the safety of the entire Big Blue to
hoping
things shall work out. You must prepare. Now, use your shar-kata speed and swim through this field of staghorn without breaking any of the branches.Â .Â .Â .”

Gray nodded, gritting his teeth. He called for the power of the tides and it came to him, filling his body with energy in the form of pure white sparkles. He could do this. The field was thick but all he had to do was make a few turns and he'd easily pass through. Gray launched himself forward andÂ .Â .Â . plowed straight into the staghorn, taking out a swath thirty feet wide. He was a megalodon, after all, so training mistakes tended to cause damage.

After a moment, he swam out, embarrassed. “Oops.”

“Well, there goes two hundred years of coral. Since we are hoping, I
hope
you can do better, and soon,” Takiza said. “I fear that the situation in the Big Blue may turn for the worse.”

Gray was scratched and bruised but he was determined not to let Takiza ruin his optimism. Deep down he
was
worried. But a leader couldn't be frightened of shadows. That made everyone nervous. The seven seas were quiet and he would remain positive. Perhaps Grimkahn had ordered his mariners to stay in the Underwaters.

What was the mosasaur king going to do? Fight the entire Big Blue?

Gray did not know this at the time, but he would bitterly regret not having made more progress in his shar-kata studies during this peaceful time. In fact, the future of the Big Blue would ride on an urchin spine because of it.