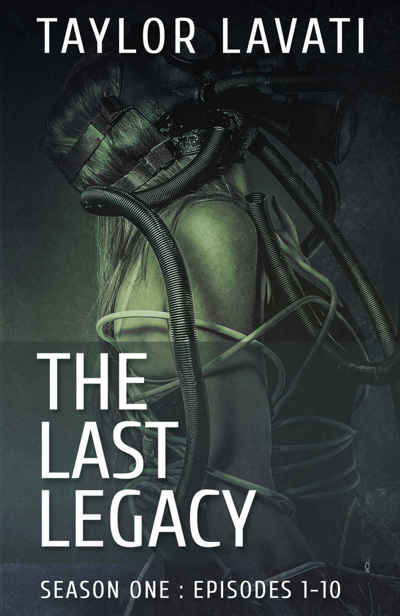 The Last Legacy: Season One

All rights reserved. No part of this book may be reproduced or transmitted in any form or by any means including photocopying, recording or by an information storage and retrieval system, without permission of the author.

This is a work of fiction. Names, characters, places and incidents are the product of the author’s imagination or are used fictitiously. Any resemblance to actual person, living or dead, events or locales is entirely coincidental.

The author acknowledges the trademarked status and trademark owners of various products referenced in this work of fiction, which have been used without permission. The use of these trademarks is not authorized, associated with or sponsored by the trademark owner.

I hated taking the bus. Creepy men sat next to me on a daily basis, trying to get me to
get off on their stop
. As if I had been born yesterday. My headphones were the first wall of deterrent I used against them. If they got through that wall, I’d change seats, then get off early and walk the rest of the way. I plugged the buds into my iPhone, noting that my service blinked off. I clicked around trying to restore the bars, but to no avail. It wasn’t like I had anyone to text or Facebook chat anyway. I tried to keep to myself.

The day had begun shitty, so I guessed it made sense that it would continue on that track. Mr. Heimenstein started my day off with his usual repetitive nagging, only today it was turned up to the max. Half the day he treated me more like a personal slave than his administrative assistant. And the other half I hid in the bathroom playing Candy Crush while nursing a Mountain Dew.

The job was all I had, and if I was truthful with myself, I was under-qualified to begin with. At twenty-four I only had a GED and two years at the local community college under my belt. Even that had been a feat to accomplish and bled my finances dry.

“Hey, miss.” Some guy tapped my shoulder from behind. I turned and pulled out one of my headphones. “You hearin’ what they been saying on the news?”

“No.” I wasn’t much of a news watcher. My early life had been crappy enough that I didn’t want to subject myself to more tragedy. Plus, I didn’t pay for the big name channels like CNN or MTV. I lived off my ten dollar a month Netflix subscription.

“We’re going to war.” The man’s brown eyes grew wide, like that was an exciting concept. His mouth formed an ‘O’ and I noticed a few teeth missing on the bottom.

“Dunno. I guess California was attacked with a monster bomb, and now they think it could come for us.”

“Here? In Connecticut?” I hardly believed that.

“Are you sure you weren’t just watching a movie?” I had to admit, from the way the guy’s eyes bugged out, he could’ve been crazy. I knew tensions had been high with some of the Middle Eastern countries lately—I didn’t completely remove myself from society—but I didn’t think we’d jump into a war on our own turf. Although, again, I didn’t watch the news.

“No movie, miss. Swear it. I was listenin’ on the radio.”

“Well, okay, then.” I smiled at him and nodded. I turned back around and put my headphone back in, hoping he didn’t bother me again. What a strange man. Not more than two minutes later the bus stopped at the end of my road. A lot of us took the bus on this street since we were all lower class and worked. I watched for the man but he stayed on the bus, his face planted against the window.

My modest two-inch heels clicked on the pavement. I didn’t dare step on the sidewalk. I had learned long ago that the pavement was much more forgiving than the cracked concrete. Especially with heels that got stuck in the divots, snapping like twigs.

My pant suit stuck to my legs. I had exactly five work outfits that I had to switch around. Today as my hair stuck to my sweaty neck, I realized I chose the wrong outfit. I thought if I looked nice my boss would give me a break, but apparently it only prompted him to be a bigger ass.

The road was quiet as it always was around five o’clock. The men in the house next to me worked nights, so this was their nap time. For Jean, my neighbor on the other side, this was when she went off to work. The yippy little dog behind the rusted, old fence barked as I passed Jean’s house.

“What are you crying about today?” I baby talked the dog. I sympathized with him, chained up outside no matter what the weather was doing. But honestly, the headaches overtook the sympathy. He just didn’t shut the hell up. Ever. I had tried giving him bones, soft treats, and even cans of food, and he still yapped for hours on end.

I got the two pieces of mail from my box and trudged up the two steps to my front yard. I lived alone, which I had craved for most of my life. I didn’t have any friends—not real ones anyway. I had co-workers who lived real lives and hated combining work and play. It wasn’t the worst, but sometimes I wished there was someone I could talk to.

I folded the letters under my armpit and hiked the briefcase on my hip while I juggled my keys, looking for the right one. The screen door was a pain in my ass, always bashing against the side of the house. A permanent crater dug in where the handle hit in the shingles day in and day out.

I stepped into the chilly house and dropped all my crap on the mat just inside the door. I had to press the door shut extra hard to get it to click. And yet, I would still take this over the studio apartment I shared with three girls a few years back. I was dumb when I said I’d stay with them, but I made it out alive and was finally living by myself. I didn’t like to dwell on the past no matter how hard it tried to creep in.

I rummaged through the kitchen cabinets, my stomach grumbling. I didn’t have much so I put on a pot of coffee and flicked on the TV in the living room. A huge red banner flashed across the screen saying, ‘State of Emergency! President declares National State of Emergency.’ Flashes of people running through the streets in California flew on the television.

I ran to my front door without another question, locking the bolt. My stomach churned as the woman’s voice blared from the television. I pulled the window beside the door open, glancing out as my fingers trembled on the sill. Nothing appeared out of place.

I ran back to the living room and sat on the arm of the puke green couch. Yippy was still barking away outside, his bark grating on my nerves. I groaned as I turned the volume up on the television, my eyes glued to the screen.

“Stay in your homes. Across America bombs with potentially lethal toxins have been dropped. We are just getting word that—“ The screen fell to blackness. The picture blinked back a few times, but after a moment went completely off.

“What the fuck?” I jumped off the sofa and fiddled with the buttons on the TV. I changed the channel, and the picture popped back on. I sat back on my knees, only inches from the screen, and watched destruction take place.

Planes dropped crates, jets zipping overhead. Explosions destroyed houses, diminishing them to piles of pure ash. I covered my mouth with my hand as I watched civilians be murdered by shrapnel—others by direct contact with the fire the bombs left in their wake.

Pure chaos reined down the streets. People broke into stores, taking advantage of the situation. Others got into cars and crashed as they rushed. My heart sped as I watched that all take place.

I tried to read what was flashing on the screen, but it was coming too frantically, the words scrolling through fast.
Americans at risk. Symptoms from gas bombs unknown. Don’t breathe the air. Don’t go outside. If you’re at a safe location, stay there. 10 PM curfew to be enforced tonight.

And then it was all gone. The power shut off, all the lights in my house dying, the old clock in my kitchen completely blank. The ground vibrated like an earthquake, and I dove underneath the kitchen table, covering my head with my arms.

“What is happening?” I muttered to myself.

The television suddenly sprung to life, the voices of the newscasters filling my small home.

Learning to Let Go by O'Neill, Cynthia P.
A Christmas Homecoming by Anne Perry
Antonia Lively Breaks the Silence by David Samuel Levinson
The Amulets (An 'Amulets of Andarrin' tale) by Michael Alexander Card-Mina
So Many Reasons Why by Missy Johnson
The Thong Also Rises by Jennifer L. Leo
One Last Call by Susan Behon
Treachery in the Yard by Adimchinma Ibe
The Sterkarm Handshake by Susan Price
Accept My Baby: A Billionaire BWWM Single Parent Pregnancy Romance by Fielding, J.A.