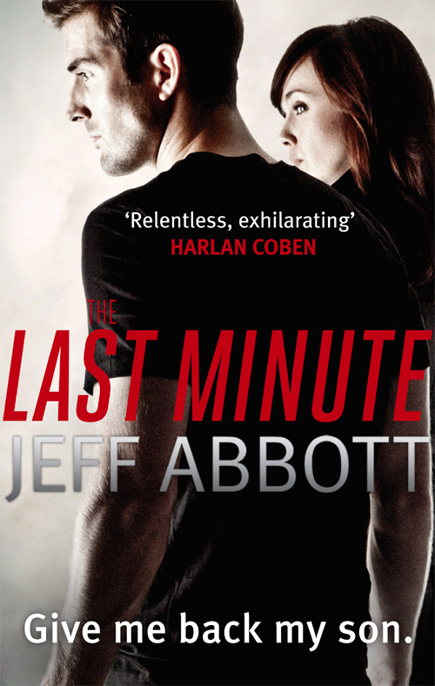 Jeff Abbott
is the author of thirteen previous novels, published in twenty languages. His books
Panic
and
Run
have been optioned for film and are in script development. Jeff graduated from university with a degree in History and English,
and worked as a creative director at an advertising agency before writing full-time. He lives in Texas with his wife and two
sons.

PART ONE: A VERY PRIVATE WAR

48: The Streets of Williamsburg

PART ONE
A VERY PRIVATE WAR
1
Manhattan, Upper West Side

I knocked on the green door and knew that in the next five minutes I’d either be dead or I’d have the truth I needed.

The man opened the apartment door just as I raised my fist for the second, impatient knock. He did not look like a man who
traded in human lives. He looked like an accountant. He wore a dark suit, a loosened tie with bands of silver and pink and
a slight air of exhaustion and impatience. His glasses were steel-framed and rectangular. His lips were greasy with takeout
Thai, and the remains of a meal – maybe his last – scented the air.

‘You and your wife are late, Mr Derwatt,’ he said. ‘One minute late.’

There were several misconceptions in his statement. First, my name was not Derwatt. Second, the woman standing next to me,
Mila, was not my wife. Third, we were exactly on time; I’d even waited for the second hand to sweep past the twelve before
I knocked. But I shrugged, full of graciousness, and he opened the door and Mila and I stepped inside. He looked her over.
He did it all in a second but I saw it. She was glancing at the two thick-necked thugs who stood by the apartment’s dinner
table. Then she cast her gaze down, as if intimidated.

Nice bit of acting, that. Mila could stare down a great white shark.

I offered the accountant a handshake. ‘Frank Derwatt. This is my wife, Lilia.’

‘Mr Bell.’ He didn’t shake my hand and I let it drop down to my side. I threw in an awkward laugh for effect. I was wearing
jeans and a navy blazer with a pink polo underneath. Mila had found a horrible floral skirt that I suppose approximated her
bizarre idea of what an American suburban housewife would wear. She clutched her pink purse. We looked like we were more interested
in country club membership than an illegal adoption.

‘I thought we were meeting alone,’ I said. Mila stepped close to me, like she was afraid.

The accountant dabbed a napkin at the Thai sauce smearing his mouth. I wanted to seize him by the throat, throw him against
the wall and force him to tell me where my son was. But that would only get my son killed, so I stood there like I was the
nervous suburban wannabe dad that I was playing.

‘Face the wall,’ one of the big men said. He was a redhead, with his hair sliced into a burr and freckles the size of pebbles
on his face. ‘Both of you.’

We both did. I set down the small canvas briefcase I was carrying.

I didn’t argue. I was supposed to be a nervous, law-abiding citizen and, although I have been those things in the distant
past, I wasn’t right now. No wire, no weapons. Just me and my shining personality and a rage I kept caged up in my chest.
The redhead searched me thoroughly. Then he did the same to Mila.

‘Frank,’ she said, about halfway through, a tinge of fear in her voice. She was selling it.

Mila made this soft hiss of assent, the patient sigh of a woman who wanted this deal to be her gateway to happiness.

‘Mr and Mrs Derwatt are clean, Mr Bell,’ the redhead said. He stepped back from us. I took Mila’s hand for just a moment.

‘Sit down, Mr Derwatt,’ the accountant said. ‘Excuse the mess. We decided on an early dinner. I don’t usually meet with clients
at night.’

I knew that normally the accountant would now be on a commuter train back to New Jersey. I had checked into every nook of
his life: a wife, two sons, a mortgage on a cozy little place to live, a life full of promise.

All the sweet elements I’d once had, and had lost.

The accountant and his toughs studied me. Let them, I thought. I’d been careful.

One opened the briefcase. He dumped the bricks of cash out onto the table and began to sort them.

Mr Bell glanced at me.

‘My wife and I,’ I lied, ‘we’ve failed to conceive after three years of trying. It has nearly destroyed our marriage. I’m
eager to give my wife a healthy, happy baby.’

‘You could adopt through legit channels.’

‘Yes. But, um, some of my business practices, I don’t care to have them scrutinized by well-meaning social workers. We simply
wish to acquire a child.’

Mila moved close to me. ‘You have done our background checks, yes? We wish to make our selection and get a child.’

‘It’s not that easy, Mrs Derwatt.’

‘I’ve brought the down payment. We select our child and then we go get him or her.’

He blinked at me.

‘That was what was agreed,’ I said.

‘The money’s all here, Mr Bell,’ the redhead had counted with the precise quickness of a man used to handling banded stacks
of cash. ‘Twenty thousand dollars.’

‘There were some anomalies in your background checks,’ Mr Bell said.

‘Anomalies. I do not know this word,’ Mila said. She’d thickened up her eastern European accent.

I held my breath. We had been very, very careful in setting up these identities. Mila had worked on them while we tried our
best to find any link to the one clue we had to my son’s whereabouts: a photo of a woman leaving a private clinic in Strasbourg,
France, soon after my son’s birth. I had been told she’d sold my son. We still did not know who the woman was, but using Mila’s
considerable resources we’d found a surveillance photo of her arriving in New York, a week after my son’s birth, walking out
of the terminal with this man. Mr Bell, whose face was in a criminal database maintained by the state of New York for having
been convicted of embezzlement six years ago and had gotten parole. We matched him to the airport photo. Found out where he
lived, where he worked and who his associates were. Slow, plodding detective work but it had paid off. We had sent out feelers
as potential adopters of a child, provided background, gotten this meeting to pick out a son or daughter.