The Law of Second Chances 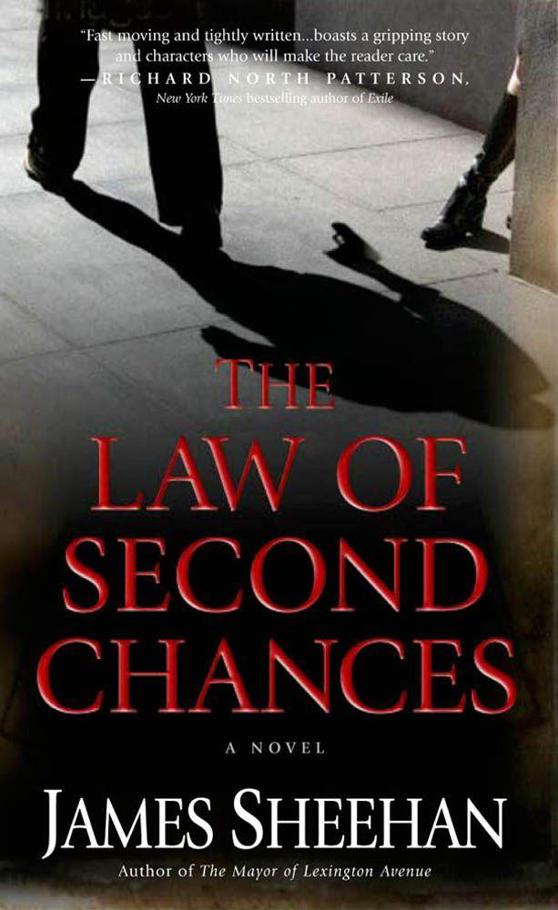 Praise for James Sheehan and his Novels

THE LAW OF SECOND CHANCES

“[A] compelling second novel…disparate story lines are deftly woven into a stay-up-all-night-to-finish-it look at the criminal justice system and the people it snares.”

“Proves that sequels can give a good author a second chance at success...A legal thriller with a surprising twist at the end. Will that twist lead to a third Jack Tobin novel? Sure hope so.”

“Fast-moving and tightly written…boasts a gripping story and characters who will make the reader care. All in all, a stylish and engaging novel.”

“A trial lawyer in the Tampa Bay area, Sheehan blends courtroom nitty-gritty, Florida nature imagery, and a tender understanding of the bonds of love.”

“Sheehan creates an involving thriller that is also a moving meditation on love and friendship.”

“Plenty of legal derring-do and interesting characters make this a worthy successor to Sheehan’s first.”

“An action-packed and gut-wrenching story that is sure to delight its readers. The twists and turns of this courtroom drama keep the reader guessing until the very end. Packed with action and emotion,
The Law of Second Chances
captures every ounce of anticipation of a drama where a man’s life is on the line.”

THE MAYOR OF LEXINGTON AVENUE

“Bold…harrowing…[an] assured first novel, which gets the blood up.”

“Not only is this a top-notch legal thriller, it’s also a moving story about love, guilt, personal redemption, and friendship. Sheehan is a truly gifted storyteller, and the novel’s format is fresh and clever...This is a terrific novel, a genuine literary achievement.”

“This first novel has all the ingredients of a satisfying page-turner...and an added plus: intelligent commentary about the inherent flaws of the capital punishment system.”

“[A] fierce and masterful piece of work.”

“Sheehan writes with bleak clarity when he’s sharing the dirty tricks of his trade in the harrowing trial scenes, but there’s a touch of the poet in his voice.”

“If you like South Florida crime novels, legal thrillers, and courtroom dramas, then you’ll love
The Mayor of Lexington Avenue
...This is a debut novel, but it reads like it was written by a master of the genre.”

“Sheehan’s powerful debut. . .reads like
To Kill a Mockingbird
on steroids.”

“This is the kind of novel you want to curl up with and read straight through—a fast-paced, dandy debut!”

The Mayor of Lexington Avenue

THE LAW OF SECOND CHANCES

To my sweet sister Kate, whose boundless energy,
knowledge, enthusiasm, faith, and love
are so responsible for my success as a writer
.

NOTE TO THE READER

Benny Avrile wasn’t a bad guy. He just looked for the easy way out of things—like every major obligation in life. Consequently, he had to steal a little to eat and sell a little to get something for himself. Cocaine, marijuana, liquor—it didn’t matter to Benny. Whatever he could get his hands on. He steered clear of heroin and crack, though. The boy knew his limitations. He wasn’t an addict—at least, that’s what he told himself. He simply needed some help to deal with the stress of living on the street. People didn’t understand the mental strain involved in not working, in not supporting a family, in not being responsible for a household. It was almost too much.

Another Saturday night found Benny at the Crooked Fence, a bar on the Upper East Side. The Crooked Fence had the perfect setup for a man with Benny’s talents. It had a long bar near the front door with tables in the back. The place always rocked on Saturday nights. Benny would position himself at the bar, usually in the middle somewhere, and start talking—to anyone and everyone about anything and everything. He might be homeless, and at twenty-eight he might have abused his body more than the average fifty-year-old, but on a Saturday night, with a little shower, a little gel, and a little Kenneth Cole, in the dark shadows of the bar, Benny looked okay.

“Nice necklace,” he said to the blonde on his left, who appeared to be in her mid-thirties, the optimum age for Benny’s
conquests or, as was normally the case, his attempted conquests.

“Thanks,” she replied and then turned her back to him.

It was so perfect and he had it down to such a science. As she turned away, Benny, knowing exactly where her purse was, reached in and slipped her wallet out. Almost without looking—he had to take a little peek to be sure—he found the credit cards and put one of them in his pocket. If he took them all, she might realize too soon that she’d been robbed. With only one gone, she would probably think that she’d left it at home. Benny could do as much damage with one credit card as he could with ten, and it usually bought him more time because the victim might not report the card missing for hours, or even until the next day. He was very proud of himself for developing this system—he was a real thinking man’s thief.

A minute or two later, he tapped the blond, who was talking to another woman, on the shoulder. She looked over her shoulder at him.

“Can I buy you ladies a drink?” Benny asked, giving her his fabled Li’l Abner–I’m–a–hick expression.

“Listen, stupid,” she began, turning more toward him to make her point. By the word “stupid” Benny had the wallet back in her purse. “You don’t take a hint, do you? Get lost! Do you understand that?
Get lost!”

“Okay, okay. Geez, I’m sorry.” Benny was already off his stool and headed for the door. “I didn’t mean to offend you,” he yelled back over the din of the crowd and the music as he retreated. Then he was out the door and walking down Second Avenue. “I just needed your credit card,” he said to nobody in particular as he patted his back pocket.

Half a block down the street he felt something hard shoved into his lower back.

“Don’t turn around. Just keep walking.” It was a woman’s voice, and she was behind him just to his left. Benny assumed the hard thing was a gun, and he had no intentions of trying anything. If there was going to be any negotiation, she would have to start. He could counter from there.

“I’d been working her for two days before you showed up,” the voice behind him said.

Benny breathed an imperceptible sigh of relief. It wasn’t the cops, and he wasn’t going to jail. Another thief he could deal with. It didn’t happen often, but sometimes he crossed paths with another member of the profession and they got in each other’s way. Benny was the guy who always deferred. It was easier that way.

This was probably the woman who had been talking to the blond. He’d never run into a woman before during this kind of gig.
They can get money a lot easier than that
, Benny thought. At least, it seemed easier to him.

“I didn’t know,” he replied to the voice. “I only got a credit card and you can have it, with my apologies.”

“My back pocket, right side.”

“Turn left at the corner,” she told him, still jabbing the gun into his back. They turned left onto Seventy-seventh Street. It was much darker off the avenue. They walked halfway down the block before she told him to stop.

“I’m going to remove this gun from your back and I don’t want you to move.”

“Then I’m going to slip that credit card out of those tight pants of yours, so don’t get excited.”

“I’ll try not to,” he said, relaxing just a little. She’d noticed his tight pants.
Maybe once we get past the credit card issue . . .