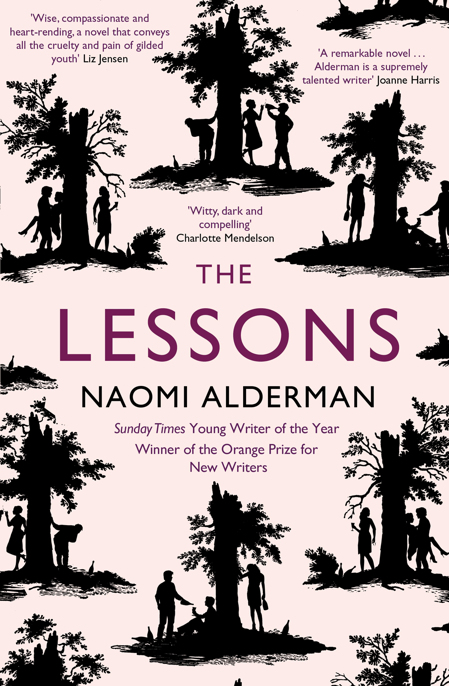 Naomi Alderman’s debut novel,
Disobedience
, was winner of the Orange Award for New Writers 2006, and in 2007 she was named
Sunday Times
Young Writer of the Year and one of Waterstone’s 25 Authors for the Future. She also writes online games, is a graduate of the Creative Writing MA at UEA and lives in London.

VIKING
an imprint of
PENGUIN BOOKS

Every effort has been made to trace copyright holders and to obtain their permission for the use of copyright material. The publisher apologizes for any errors or omissions and would be grateful to be notified of any corrections that should be incorporated in future editions of this book.

Without limiting the rights under copyright reserved above, no part of this publication may be reproduced, stored in or introduced into a retrieval system, or transmitted, in any form or by any means (electronic, mechanical, photocopying, recording or otherwise), without the prior written permission of both the copyright owner and the above publisher of this book

For my grandmother Lily

Like the beautiful bodies of those who died before they had aged,

sadly shut away in a sumptuous mausoleum,

roses by the head, jasmine at the feet –

so appear the longings that have passed

without being satisfied, not one of them granted

a night of sensual pleasure, or one of its radiant mornings.

When I returned from San Ceterino late in the afternoon, I found that Mark and his friends had thrown half the food in our kitchen into the swimming pool. Through the clear water I could see a panettone dissolving into a shimmer of red and green crystallized fruit, while the poolside tiles were smeared with yolks and broken shell fragments. A sodden pizza lolled lazily on the bottom of the pool, flapping at one edge like a mottled tongue. Jars of artichokes and peppers had spilled an oil slick across the surface of the water. Ripe tomatoes and peaches, two bunches of grapes, a selection of wax-paper-wrapped cheeses and cartons of milk were strewn across the underwater tiles, still intact. A poached salmon had broken into fragments, chunks of it floating by the pool filter. And among the food, various other forms of debris: a plastic garden chair, cigarette ends, a soggy paperback still barely afloat.

A quiche was ground to eggy mush on the tiles; I nudged it with the toe of my plimsoll. I looked around. No one in sight. I’d only been gone since 10 a.m. Mark must have called his friends almost as soon as I left. Faint strains of television chatter drew my attention to the converted stable block behind me. Yes. Deal with the kids first, then find Mark. I walked down the gravel path towards the stable block’s lounge. The television was louder here, and I could hear occasional laughter and bursts of Italian conversation.

I pushed open the door. The room was stiflingly hot. Clothing and half-empty bags of snacks were strewn over the floor. A CD had apparently been used as an ashtray. Three nearly naked brown bodies were draped over the sofas – Stephano and Bruno were wearing only shorts, feet dangling over the arms of one sofa. Stephano’s sister Magdalena was lying on her back on the other, wearing a pair of jeans and an orange bikini top, a carton of popcorn balanced on her stomach. Three pairs of eyes flicked up at me, then back to the television screen. Wile E. Coyote was attempting to heave a boulder over a cliff, little realizing that Road Runner was right behind him. Road Runner beeped. The coyote dropped the boulder on himself. The three Italians laughed and I found myself momentarily astonished that there should still be people who watched Wile E. Coyote cartoons and laughed out loud. But they’re children really. Stephano’s the eldest and he can’t be more than eighteen.

They looked at me, then back at the screen. Wile E. Coyote had purchased a box of ACME dynamite. Any moment now it was going to explode in his face.

I picked up a handful of clothing and threw it at the boys.

Stephano pouted at me.

‘But Mark said we could stay. Watch TV.’

Stephano stood up with an irritated shrug and pulled his T-shirt over his head. Bruno did likewise and they began to gather together their belongings. I noticed Bruno slip a couple of DVDs into his bag as he packed, but said nothing. Magdalena couldn’t find her top. I brought her an old T-shirt of mine and she made a moue but accepted the shirt. The three of them headed off down the hill.

After they’d left, I found that I was shaking. In the bathroom, I splashed some cold water on my face and stared at myself in the mirror. I looked older, tired and very white, my stubble showing darkly against my skin.

I walked around the pool to the pine summer house, always so pleasantly fresh even on the hottest days. I smelled the herbal scent of pot. The three kids had probably just smoked a joint, but judging by the state of the pool Mark had taken something a little more potent. The door of the summer house was ajar. Just inside the threshold, clothing was scattered on the rattan mats. I recognized the trousers Mark had been wearing when I’d left for work in the morning, and a T-shirt that was too small to belong to anyone other than Magdalena. The smell was more intense inside the summer house, that telltale thick musky scent. They’d had a party, then. Of course.

The main room was disordered; Mark’s remaining clothes were piled in a little heap on the table, they’d thrown cigarette ends into the old music box, the floor was wet and two of the cane armchairs were on their sides. No broken glass though. That was a blessing considering the last time. I found Mark where I expected, in the little bedroom, naked on the sticky sheets. He was lying on his back. I thought he was asleep at first, but when I stepped into the room, intending to cover him with a sheet, he opened his eyes and sat up.

He was drunk of course, but of course not just drunk. His cheeks were flushed, his eyes large, his movements jerky and uncoordinated. He moved his head back and forth, trying to bring me into focus. At last, he smiled.

‘Oh, it’s you, James, you –’ He broke off, looked around him and continued after a moment. ‘You’ve been gone for
days
. We had to hide, in here we had to hide. There was danger outside but it’s better here.’

He smiled at me again. A stupid smile. He shook his head.

He shook his head and touched one finger clumsily to the side of his nose.

‘Mark, what happened to the pool?’

He blinked at me.

He looked at me, trying to keep his face solemn, but his mouth kept twitching and he broke into giggles.

‘It was
soup
. We made soup! We were hungry, so I said let’s make the biggest soup in the world! You haven’t eaten it all, have you? Have you?’

‘No, I …’ I rested my thumbs on my temples and massaged my forehead. ‘I’m very tired, Mark. You should rest too. We’ll talk in the morning, OK?’

He looked at me, suddenly sly.

I felt a tightening around my head, as of a strap being pulled closer and closer.

‘I’ve sent them home. Their parents would be worried otherwise. You remember what happened before, don’t you? You shouldn’t keep them up here so long.’

He muttered something, too low for me to catch.

I turned to leave.

‘I
said
, you want me all to yourself, then!’ Mark shouted after me.

I stood with my hand on the door.

‘No,’ I said, ‘I want to call the pool man to get the mess you’ve made cleared up so I can get to bed before midnight. I have work in the morning.’

‘You
do
,’ he said. ‘You
do
want me to yourself. That’s all you’ve ever wanted. The only reason you’re here is that you think one day I’ll run out of other people and you’ll still be here waiting.’

I felt a blush begin to rise.

‘That’s enough, Mark.’ I sounded, even to my own ears, less certain than I had talking to Stephano.

‘It’s
not
,’ he said. ‘What do you go to that job for anyway? Just to pretend that I don’t pay the rent and the bills and the housekeeper and the bloody pool man too. This is what you’ve always wanted, isn’t it? Since Oxford all you’ve ever wanted …’

I turned my back on him and walked out of the summer house. He raised his voice as I left but I thought of other things and closed my ears to him.

He was sorry later. I’d known he would be. It’s the same every time.

I heard him padding around the kitchen in the early hours of the morning. He’d been crying – his eyes and cheeks had that squashed, overripe look – but he doesn’t cry in front of me any more. He’d showered – his hair was still damp and falling into his eyes. He blinked at me through his fringe and apologized over and over again until I could hardly bear to hear him keep talking.

Solid Foundation by J. A. Armstrong
The Black Onyx Pact by Baroque, Morgana D.
Death Under Glass by Jennifer McAndrews
Bonded to the Pack (Born to be Were) by Flynn, Donna
Smith Investigation Series Box Set 1 by Deborah Diaz
The Book of Sight by Deborah Dunlevy
The Manhattan Puzzle by Laurence O'Bryan
Amazon Awakening by Caridad Piñeiro
The Michael Jackson Tapes by Shmuley Boteach
Bloodrush (The Scarlet Star Trilogy Book 1) by Ben Galley