Read The Light in the Darkness Online

The Light in the Darkness 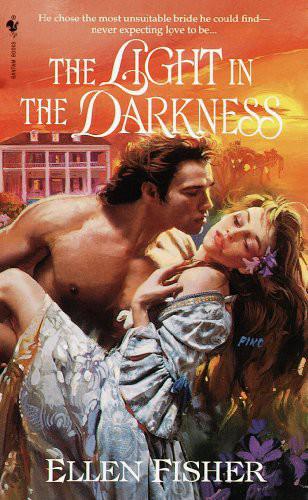 he commanded softly, eyes gleaming with something more than hope. Jennifer saw the powerful emotion in his eyes, recognized it for what it was with feminine instinct, and helplessly responded to it.

“I want you,” she whispered, less shyly now.

The expression of raw, elemental passion on his face left little doubt that he returned the sentiment in full. How he could want her so powerfully, so desperately, she could not fathom, but it was evident that he did. She was unable to bring herself to question fate. Slightly dazed at the direction events were taking, she repeated, “I want you.”

The crystalline truth of those words shocked her. She had thought herself attracted to his younger self, a man with Grey’s arrogance and charm, but with Edward’s passion. Somehow that man was before her now. He came slowly to his feet, staring down at her with all the passion that was his nature etched on his handsome face.

And Jennifer felt the first passion of her life welling up in response. She did not struggle when his lips touched hers. Instead she responded eagerly, joyfully, wrapping her arms around his broad shoulders, reveling in the strangely delightful sensations his caressing hands and lips aroused. The taste of apple brandy was so intoxicating, his arms around her so warm and solid, that she wondered dizzily if she were dreaming.

It had to be a dream.

Reality had never been this wonderful.

“Ellen Fisher tells a powerful, emotionally charged story with compelling, complex characters and sizzling chemistry. Her attention to historical detail effortlessly draws the reader into Virginia of the eighteenth century. An amazing talent assured of a bright future in the realm of historical romance. I cant wait to read her next book.”

THE LIGHT IN THE DARKNESS
A Bantam Fanfare Book/October 1998
FANFARE and the portrayal of a boxed “ff” are trademarks of Bantam Books, a division of Bantam Doubleday Dell Publishing Group, Inc.

All rights reserved.
Copyright © 1998 by Ellen Fisher.
Cover art copyright © 1998 by Pino Dangelico.
No part of this book may be reproduced or transmitted in any form or by any means, electronic or mechanical, including photocopying, recording, or by any information storage and retrieval system, without permission in writing from the publisher. For information address: Bantam Books.

Bantam Books are published by Bantam Books, a division of Bantam Doubleday Dell Publishing Group, Inc. Its trademark, consisting of the words “Bantam Books” and the portrayal of a rooster, is Registered in U.S. Patent and Trademark Office and in other countries. Marca Registrada. Bantam Books, 1540 Broadway, New York, New York 10036.

Truth will come to light; murder cannot be hid long.

Edward Greyson enunciated each word with care. Gulping a mouthful of Madeira, he scowled darkly at his sister over the rim of his wineglass. “I have no need for a wife,” he went on, warming to his subject. “No desire for a wife. And furthermore, I can scarcely conceive of a woman who would be foolish enough to voluntarily live under the same roof as myself, excepting, of course, you. To sum it up completely, therefore, I have no intentions of ‘gracing Greyhaven with a bride,’ as you so eloquently put it.
Ever
.” He poured himself another glass, sloshing some of the alcohol onto the thick Oriental carpet that adorned the floor of the parlor, and fixed his sister with a piercing silver glare. “Any questions?”

Catherine Greyson met his belligerent gaze without flinching. “Yes,” she said coolly, without the least trace of humor on her elegant features. “When are you going to find a wife?”

Her brother’s scowl darkened. “Either you are losing your hearing,” he said with annoyance, “or your good sense. We have been through this repeatedly, and I see no reason to go over it yet again. Leave me alone.” He turned his back on her, staring moodily at the broad expanse of
the James River through the wavy glass of the window, but Catherine refused to be dismissed so summarily.

“My good sense?” she echoed angrily. “I am losing neither my sense nor my hearing, Grey, but I do believe that I am beginning to lose my sanity from living in the same house as you. You are enough to try the patience of Job!”

“My point exactly,” Grey said, his gaze fixed on the river. “If a saint like yourself can scarcely bear the sight of me, how can you expect any ordinary woman to do so?”

“Damn it, Grey!” Catherine snapped, temper overcoming her wonted poise. “Despite your dissolute ways, every woman along the James has thrown herself at you, but you have scorned every last one. Some of them are far more saintly than I—”

“Surely not,” Grey said in a tone of mocking disbelief that told her he was enjoying her outburst immensely.

“You don’t need a saint,” she said wearily, torn between sympathy and rage. “You simply need a woman who will make you happy. And since you will be in Princess Anne County for a month, won’t you just
look
for such a woman?”

Grey turned on her abruptly, forgetting his feigned fascination with the view. “No woman on earth can make me happy,” he said savagely. “I am going to Princess Anne County to visit my friend Kayne O’Neill, not to seek a wife.”

Grey smiled wryly at his sister’s persistence. “You make it sound as simple as purchasing horseflesh.”

“If you were to find a suitable woman, it could be.”

“A suitable woman,” Grey repeated. “And, pray tell, what sort of woman is suitable to be the wife of a drunkard?” His tone was sardonic, but she heard the self-loathing beneath it.

“A girl of good breeding, of impeccable manners,” she clarified, ignoring his bitterness and the sympathy that stabbed her. “A lady worthy of the Greyson name.”

Grey merely looked incredulous, and she shook her
head impatiently. “Grey, you simply must marry. Once the Greysons were one of the finest families in Virginia; now we are scorned by our own class and mocked by the common planters. And little wonder. You don’t dice, you don’t race your stallions against other gentlemen’s stock, you don’t participate in cockfights. And you have showered contempt on every eligible young lady who has had the misfortune to be introduced to you. We never have visitors anymore, for you’ve gone out of your way to alienate every family along the James. The entire county thinks you peculiar, if not outright mad.”

“Surely,” Grey said scathingly, “you don’t believe that I give a damn about the opinion of my neighbors.”

“I know you don’t. It’s scandalous, really, how little regard you have for what others think of you. What would Mother and Father have thought of your conduct these last years? They would have been horrified.”

“As to that,” Grey drawled with utter unconcern, “I cared even less for what our parents thought than I do for the opinions of our neighbors.”

“What about children?” his sister continued. “Surely you want a son.”

Grey shook his head slowly, glancing down at the nearly empty goblet he held in his hand. A slight, self-deprecating smile lifted the corners of his mouth as he said curtly, “Whether I want a son is not the question. Rather the question is, would I be a good father?” He raised the glass slightly. “I think not.”

Instantly sensing that she had taken the wrong approach, Catherine attacked from another angle. “What about me?” she demanded. “Do you care nothing for my future? However do you expect me to find a husband when most of the young men in the county believe that you are demented?” She knew perfectly well that at three and twenty she was still unwed because she was lame, but she was willing to use any argument, no matter how unfair, if it would encourage him to seek a wife.

She was pleased to see faint concern replace the cold
indifference on Grey’s lean face. “I did not realize you were in such dire need of a husband,” he said slowly. In truth, he had thought little about Catherine’s future, so engrossed had he been in his own problems these last years. Now, staring thoughtfully at her, he realized that she was indeed somewhat beyond the usual age for matrimony. Had she ever had so much as a single suitor? To his shame, he found that he had no idea.

Catherine’s gaze found his. “Isn’t that what all women want?”

“Perhaps. And yet I think that the woman who prefers my hand in marriage to spinsterhood is a fool. However …”

He hated the thought of marriage, despised it with a savage vehemence. And yet perhaps he did have some responsibility for his younger sister. It was a damned uncomfortable thought.

At any rate, he was bloody sick and tired of being nagged constantly about the subject. He took another long draught of Madeira, steeling himself. “If it will make you happy,” he growled reluctantly, “I promise to search for a bride during my stay in Princess Anne County.”

“Wonderful,” Catherine breathed, smiling for the first time since their argument had begun. “If you’ll only look, I’m certain that you can find a suitable woman.”

Again that curious mocking smile crossed Grey’s harsh features. “Very well,” he conceded. “If I find a suitable woman, I promise you I will bring her to Greyhaven as my wife.”

J
ennifer Leigh Wilton found the dark man seated in the shadowy corner of the Pine Tree Ordinary extremely disturbing. She was accustomed to the lascivious stares of men, to their sneering laughter and coarse groping hands. But this man, with his hawklike features and elegant clothing, was far different from the usual patron of the tavern. He seemed to regard her, and all the noisy occupants of the smoke-clouded room, with a detached silver gaze that bespoke aristocratic distaste.

Her anxiety was not improved by the fact that the only person in Jenny’s small world whom she considered a friend, Carey O’Neill, had left the tavern abruptly, leaving a nearly untouched tankard of ale. Carey, the only regular patron of the ordinary who had never attempted to pat her bottom or run a crude finger inside her neckline, had risen to his feet the moment the dark man entered the tavern and cast a look of cutting disdain at him as Carey stalked from the taproom. And Jenny had not missed the scornful glance the dark man had sent back. It was obvious that Carey O’Neill disliked the dark man for some reason, and Carey was the only person in the world whose opinion Jenny valued.

Despite her unease, however, Jenny maneuvered her way through the rough-hewn pine tables and the rowdy customers, all of whom were gulping ale and smoking clay pipes, to stand next to the dark man’s table. It was lit only
by a rushlight, a sliver of rush soaked in animal fat and held in a crude iron holder. But despite the dim light, disconcerting silver eyes snapped to her face and quickly surveyed her from her lank mouse-brown hair, topped with a simple white mobcap, to her worn leather shoes and too-small homespun gown. If possible, the look of revulsion on his aquiline features intensified.

Rules of Betrayal by Christopher Reich
Come and Get It by Beyond the Page Publishing
Dragons Don't Cry by Suzie Ivy
The Lonely Hearts Club by Elizabeth Eulberg
Boyracers by Alan Bissett
America's Great Depression by Murray Rothbard
Nerds Are Freaks Too by Koko Brown
The Bloodgate Guardian by Joely Sue Burkhart
Surface Tension by Brent Runyon
When Winter Come by Frank X. Walker