Read The Light in the Ruins Online

The Light in the Ruins 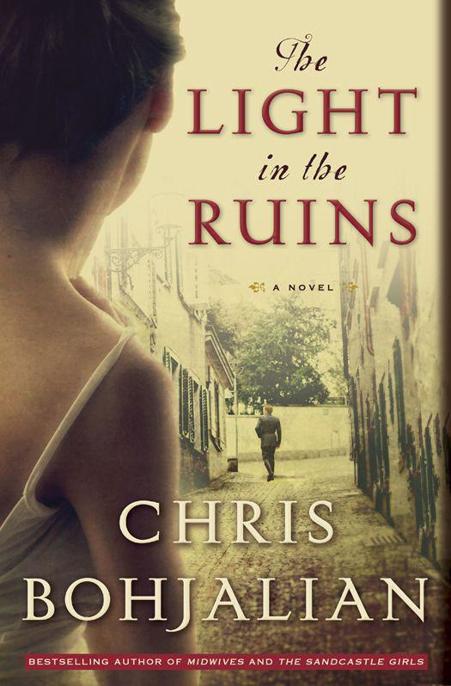 All rights reserved. Published in the United States by Doubleday, a division of Random House, Inc., New York, and in Canada by Random House of Canada Limited, Toronto.

For Andy Bohjalian
and—once more—
for Victoria and Grace

I dream of the hills around Siena, and of my love whom I shall never see again. I shall become one gaping wound—like the winds, nothing
.

—From a note hidden in the seam of the shirt of an anonymous civilian executed by the Gestapo in Rome, 1944

A WOMAN IS sitting before an art nouveau vanity, brushing her hair in the mirror. It is, at least according to the police report, somewhere between midnight and three in the morning, on the first Tuesday of June 1955. For dinner she ate a small portion of an impossibly rich pasta—a fettuccini with pecorino cheese and great ladles of truffle oil—at a restaurant popular with wealthy American and British expatriates five blocks west of the Uffizi and a block north of the Arno. She was one of the few Italians there who weren’t part of the kitchen or wait staff. She has since bathed, soaping off both her own perfume and the cologne that was worn by her dinner companion—the fellow who had come back here to the apartment, made love with her on the thin bed no more than three feet from the vanity, and then left. He was a suspect in the murder investigation, but only briefly. If he had had even the slightest inclination to spend the evening, there is every chance that I would have executed him that night, too
.

At the moment she is wearing her nightgown (which is not especially revealing), though at some point very soon it will be cut off her. Yes, cut. Not even pulled over her head. Sliced from the opening at her collarbone down to the hem, which, when she stands, is mid-shin. By then, of course, she will be dead. Bleeding out. I will have sliced open her neck from one side of her jaw to the other
.

Just so you know, that art nouveau vanity is not particularly valuable. The white paint is chipped, and two of the whiplike finials along the right side broke off years ago. Before the war. Moreover, her nightgown is cotton, and the material has started to pill. I mention this so you are not envisioning this room as more glamorous than it is. The woman is still beautiful, even now, in middle age, and despite the horrific, seemingly unbearable losses she endured a decade ago, in the last year of the war. These days she lives in a neighborhood of Florence that is solidly working-class, a section the tourists visit only when they are impressively, almost hopelessly lost. A decade ago, she would not have known a neighborhood like this even existed
.

The apartment has neither a doorman nor a primitive intercom connecting the wrought iron and frosted glass street door with her modest unit. It is locked, but not all that difficult to open. (Really, it wasn’t.) According to the police report, at some point in that roughly three-hour window in the early hours of that first Tuesday in June, I used a blunt object (the handle of my knife, as a matter of fact) to break a pane of the glass near the doorknob. Then I reached in, turned the lock, and opened the door. Remember, this is an unassuming little building. Then I moved silently up the stairway to the third floor, where she lived, and knocked on her door. She rose from the vanity, her brush still in her hand, and paused for a moment on her side of the wood
.

And here I lied. I said I was her dinner companion, speaking into my gloved hand to muffle my voice
.

So she opened the door and would be dead within moments
.

And why did I slice open her nightgown? I didn’t violate her. It was so I could cut out her heart. A woman with the lilting name of Francesca Rosati, who had once been a Tuscan marchese’s daughter-in-law, was my first
.

THE PLANES FLEW in great flocks that May over the Crete Senesi, the lunarlike landscape that marked the Tuscan countryside southeast of Siena. By night the planes were British or American bombers and their destination was Bologna. By day they were German, long streams of Junkers, and their destination was either Sicily or Naples. After that they would attempt to reach Tunisia and reinforce the Axis troops there, but most—and Cristina Rosati knew this from the BBC, not from her own country’s newspapers—would be shot down and crash into the Mediterranean Sea. The Italians and Germans in North Africa were finished, and there was absolutely no chance of evacuating them; the army might as well have been on the moon. Sometimes Cristina wished that her brothers were in Tunisia so they might be captured by the Allies and sent to England, where they could await the end of the war in the safety of a prisoner-of-war camp. Instead, Marco was in Sicily, preparing the beaches there for the anticipated Allied invasion. He was an engineer. Vittore, an archeologist, was safe in Florence, but there was bombastic talk on the radio and in the newspapers about the need for total war, and no one in her family would have been surprised if he were suddenly given a rifle and sent off to Sardinia or Greece or some battery along the coast. Both of her brothers were older than she was; barely eighteen, Cristina was the baby of the three Rosati children.

For a long moment she stood outside on the villa’s southern terrace and watched the planes, the dark fuselage of each aircraft
gleaming in the sun. She was holding four cloth dolls that belonged to her young niece, as well as the scraps of red and gold napkins from which she was crafting Renaissance dresses for the two princesses and tunics for the two men—neither of whom, according to the little girl, was a prince. Cristina had been playing with the child on the terrace when the girl’s mother had informed them that it was nap time and herded the child and her brother—who at that moment had been running like a madman along the edge of the swimming pool, using a thin beech branch as a saber—upstairs to the nursery.

And so Cristina was alone when the planes droned southward, high above the Villa Chimera. She was fascinated by them, held almost spellbound. Someday, when the world once again was at peace, she would fly somewhere in an airplane. To Pisa, maybe. Or Naples. Or perhaps all the way to Paris. She couldn’t imagine anything more glamorous.

Now a pair of small lizards raced past her, faster than snakes, darting just beyond her toes into the lilacs that grew along the edge of the loggia. Nearby she heard the bells on the sheep and, farther away, the low thrum of a distant tractor. She thought she heard one of the estate’s horses whinny. Arabella, most likely.

Finally, when the planes had disappeared far to the south, she ventured inside. Her sister-in-law appeared almost at the same moment, tiptoeing down the stairs so she wouldn’t disturb her children. She was shaking her head.

“The planes are starting to scare Massimo,” Francesca said. Massimo was seven, old enough to understand the connection between the planes and the dangers his father might soon face in Sicily. He’d overheard the conversations of the more injudicious grown-ups about where the Allies would strike when they had finished with Africa. And then there was all the talk of the bombing in Genoa and Turin, and the possibility that their family might take in urban children whose homes had been destroyed by the Allied air attacks.

“And Alessia?” Cristina asked. Her niece was five and utterly fearless.

Francesca shrugged and poured herself a glass of iced tea. “Oblivious. The world is a game to that child. Fortunately.” Then she sat down and stretched out her long legs before her. She, too, was barefoot, but somewhere she had found a bottle of polish and painted her toenails red. She was wearing one of the elegant floral skirts she had purchased when they had been in Florence just before Christmas. It was inappropriate here in the country in the middle of the afternoon, but it swayed like a ballerina’s when she moved, and Francesca wasn’t made for a world of scarcity or sacrifice. She was nine years older than Cristina, twenty-seven now, and had always seemed to her younger sister-in-law to embody the chic that Cristina had glimpsed in her visits to Rome or Milan or, more frequently, Florence. Francesca dyed her hair the color of honey and clearly had no intention of allowing herself to grow round while her husband was in Sicily and she was here alone with the children.

“I hate airplanes,” she added after a moment. “No good has come from an airplane. Ever. You realize that, don’t you?”

“I know nothing of the sort,” she said. “I saw you from the window. You were watching the planes. Someday you’ll be looking up and they’ll be bombing you. Us. The estate. You watch. Someday the bombs will be falling on our heads.”

Outside, they heard a car winding its way up the gravel road that led to the villa, and Cristina wandered to the dining room window. The automobile was a long, black army staff car. No doubt people had been talking as the vehicle had wound its way through the narrow streets of the village, past the hulking medieval granary, and then up the hill to the estate. She watched as the young driver, a private, hopped out and opened the rear door for the two officers, one German and one Italian. She didn’t recognize either
of them and felt a pang of anxiety. They couldn’t possibly be bringing good news, she thought, but nevertheless she tried to reassure herself. The closest her brother Vittore ever came to danger was his arguments with the Germans when they wanted to steal some treasure in Arezzo or Florence and take it to Germany—and those disputes, he insisted, were civilized. The Germans would ask and he would say no. They would grow more adamant and he would explain why the painting or statue or vase could not be moved. And then they would either ignore him completely and loot the artifact anyway or—for reasons that were inexplicable to Vittore but he guessed had everything to do with whether the Germans had already promised the piece of art to a spouse or mistress or a more senior officer—back down and choose a less valuable item from the collection.

No Mercy by Lori Armstrong
The Space Between Trees by Katie Williams
Ethan Wright and the Curse of Silence by West, Kimbro
Death World (Undying Mercenaries Series Book 5) by Larson, B. V.
Daisy and the Duke by Janice Maynard
Grave Consequences by Aimée Thurlo
Eight Hundred Grapes by Laura Dave
The Hollow Needle by Maurice Leblanc
Lucky Horse by Bonnie Bryant
Raw by Belle Aurora