Read The Light of Day: A Novel Online

The Light of Day: A Novel 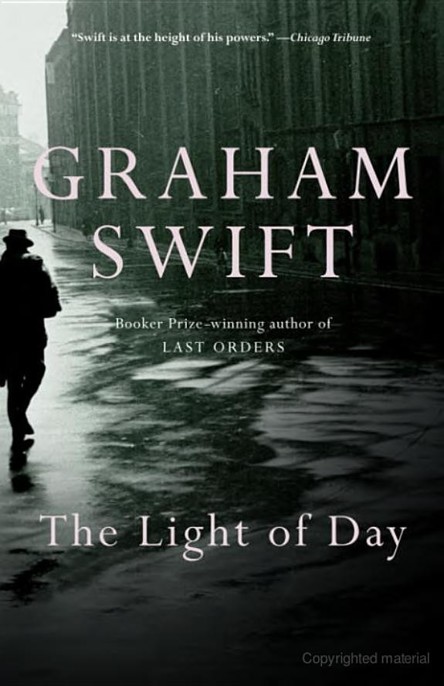 Acclaim for Graham Swift’s THE LIGHT OF DAY

“A masterful, first-person narrative about love’s sudden revelations and its retributions. . . . Swift delivers another remarkable piece of fiction—one that sticks with you and gnaws on the soul.” —
St. Louis Post-Dispatch

“Exquisite. . . . Swift is not about to let go until our vision is blurry from lack of oxygen. The fierceness of this choke-hold is what makes Swift such an exhilarating writer, such an essential one.” —
Milwaukee Journal Sentinel

“Intricate. . . . Swift is a virtuoso of narrative ventriloquism; he inhabits his characters through their voices. Swift manages this patterning of motives with exquisite economy.” —
The New York Times Book Review

“Affirms the shifting nature of human connections, and uses the mundane details of a single day to explore the broad scopes of love and passion, venality and benevolence.” —
Los Angeles Times

“Mysterious . . . seductive . . . [filled with] moments of understated metaphorical brilliance.” —
The Boston Globe
“It is Swift’s sheer, unstoppable—and at times unfathomable—affection for his characters, his tender feelings towards their everydayness, their ordinariness . . . that makes one follow their stories.” —
The New York Review of Books

“Luminous. . . . This taut thriller gradually becomes a finetuned investigation of how even our simplest, most personal choices can spiral uncontrollably outward.” —
People

“A heartbreaking story about loving too much, not loving enough, and the hope of redemption from loveless acts. Swift is to be lauded for a fine psychological tale that, with sensitivity and heart, examines the textures of loyalty and love.” —
Rocky Mountain News

“Moving. . . . Swift is a master of the mordant line. . . . [He] describes [each episode] with characteristic empathy and a deep, persuasive tact.” —
Newsday

“The plot and shifts in time are masterfully juggled, with lots of interesting asides. . . . Great sentences and memorable characters make it a good, fast read.” —
The Capital Times
(Wisconsin)

“Mr. Swift’s revision of a genre is ingenious.” —
The New York Sun

“Graham Swift is one of a trio of world-class British writers . . . (Martin Amis and Ian McEwan are the others) who are bringing a fierce new energy and edge to the contemporary novel. [Swift is] a superb stylist, a master of suggestive compression.
The Light of Day
is at once perfectly balanced and eerily incisive.” —Book Magazine (four stars)

“Draws the reader on like the best whodunnit. A profoundly artful, beautifully weighted, resonant and humane literary novel.” —
The Daily Telegraph
(London)

“Graham Swift’s genius is for putting the strangest of lies into the most provincial of English landscapes. . . .
The
Light of Day
has a brilliantly slow, precise, careful structure [but] the story it has to tell is wildly extreme, sensational and romantic.” —
The Guardian
(London)

“A writer of penetrating insight and formidable talent. A beautifully constructed book, which flows musically. The pace is gentle but brilliantly sustained, its association of ideas is intricate but achieved with a magically delicate touch. . . . Deserves to be inhaled, greedily, in a single sitting.” —
The Independent on Sunday

“Swift has the ability to cast a spell over a story, magically illuminating the small details of human interaction and the outside world. The tension is effortlessly sustained. Full of wonderful moments. . . . Does anyone a power of good to read prose of such sensitivity.” —
Sunday Express

All’s fair in love and war

“Something’s come over you.” That’s what Rita said, over two years ago now, and now she knows it wasn’t just a thing of the moment.

Morning traffic in Wimbledon Broadway. Exhausts steaming. I turn the key in the street door, my own breath coming in clouds.

“Something’s come over you, George.”

She’s here before me of course. When isn’t she? She doesn’t sleep these days, she says. “These days” have lasted years. Always awake with the dawn, so why not? Always something to be done. And I pitch up after her. Boss’s privilege. Though it’s not yet half-past eight, and last night I was out on a job till gone two. And today’s a special day.

As I reach the top of the stairs I hear the click and hiss of an already warm kettle being switched on. The computer in her little compartment (we call it the “reception area” but area’s a generous word) is already up and running. It feels like she might have been here all night.

“Cold,” she says, with a shiver at the air I’ve brought in and a little nod to the outside world.

She’ll have been here before the sun hit the streets.

“Coffee or tea?” she says, ignoring my smile—and that word—as if insisting I’ll have had a rough start.

But I don’t have a sleep problem, not now. Though maybe I should. I can grab it when I can, cat-nap, get by on little. An old trick of the trade. And Rita’s sleep problem, if she’s honest about it (and sometimes she is) isn’t really a sleep problem either.

She’s wearing the pale pink top, soft wool, above a charcoal skirt. Round her neck a simple silver chain. The small twinkly stud earrings, a waft of scent. She always gets herself up well, Rita. We have to meet the public, after all.

I go into my office, leaving the door open. The sun is streaming through my first-floor window, the low, blinding sun of a cold November morning, the sun Rita never gets in her compartment, except through the frosted glass of my door.

She follows me in with the tea, and a mug for herself, a bundle under her arm. There’s always this morning conference—my office door open—even as I settle myself in, take off my coat, switch on my own computer, sit down. The sun’s warm through the glass, even if outside the air’s icy.

She puts down my tea, already sipping her own, eyeing me over the rim. She slips the bundle onto my desk, pulls round the other chair—the “client’s chair.” She steps through bars of bright light.

It’s like a marriage really. We’ve both thought it. It’s better than a lot of marriages (we know this). Rita—my assistant, my associate, my partner, or not-quite partner. Her job description has never exactly been set in stone. But I wouldn’t dream of calling her my receptionist (though she is that too) or even my secretary.

Where would I be without her?

But she’s going to leave me, I can tell. One morning like this one: she won’t bring in a mug of her own and she won’t put down the bundle of files, she’ll keep it hugged tight to her, a shield, and she won’t sit down. She’ll say “George” in a way that will make me have to look up, and after a bit I’ll have to say, “Sit down, Rita, for God’s sake,” and she’ll sit facing me like a client.

She knows what day it is. A Thursday, and Thursdays are special, but she knows the date, the day of the year. November 20th. Two years—if you count it from
that
day. Two years and it hasn’t stopped. And if it hasn’t stopped, it will go on for the years to come, however many they’ll be. The time’s gone when she could say (as she did once), “How can you, George—with her?” Or when she could say, to herself: He must be mad, he must be off his head, but he’ll come round, it’ll stop, give it time. He’ll come slinking back. And meanwhile what better guarantee, what better safeguard, really—that woman being where she is?

I think she’s come to accept it—even to respect it. A fact, a feature. Mr. Webb is always “on an assignment” every alternate Thursday afternoon. I’ve even seen this look of sweet sad understanding in her eyes. That’s why I think she’s going to quit.

“Those are for Mrs. Lucas—this afternoon. Five fortyfive. Earliest she can do.” A quick glance. “You’ll be back?”

We both know what’s in the envelope. Photographs. Photographs of a man and a woman in a hotel room. A little blurred but clear enough for recognition, at six-by-nine enlargement. “Surveillance equipment” is reliable these days. We have to get the film processed specially—a private contract—and Rita collects. A man and a woman doing things with each other. But this sort of stuff hardly raises an eyebrow or even gets that much of a look from Rita and me. It sits there, like the morning mail, between us.

Our stock-in-trade. Can you see who’s who? That’s the vital thing.

“And I’ll just say”—she doesn’t push the point too much—“you’ll be out of the office till then?”

“But I won’t leave before ten. I can take calls till then.”

“It’s a beautiful day out there,” I say again. “Cold, but beautiful.”

Another sideways look, more lingering this time. She might be saying, You poor bloody idiot.

The eyes are tired, made up immaculately, but tired. The sunlight streaming in is like a warm bath, but it isn’t kind to the lines round her eyes. It catches a wisp of steam rising from her mug and puts a sparkle in her hair. She moves a bit closer to point out something. A silver bracelet at the end of the pink sleeve.

A long time now, since the last time. I’d asked her round to try some of my cooking (Rita may be an angel, but she’s a hopeless cook). I might even have spelt it out to her: a meal, that was all. But that’s the trouble with good cooking (if I say it myself). Not to mention red wine. It warms the heart, the cockles, as well as the stomach. Melts the resistance.

“Things on your mind, Reet?” The considerate boss.

“Not exactly, George. You?” She’d cupped her wineglass in both hands—her nails wine-red too. “It’s just not having anyone there. You know. Somebody by your side.”

Was it Good for You Too? by Naleighna Kai
Escape from Undermountain by Mark Anthony
La verdad de la señorita Harriet by Jane Harris
Wolves Eat Dogs by Martin Cruz Smith
La Sombra Viviente by Maxwell Grant
The Best Mistake of Her Life by Aimee Carson
Christmas in Harmony by Philip Gulley
Irish Luck by RaeLynn Blue
Wrapped in You by Kate Perry
The Quarry by Banks, Iain