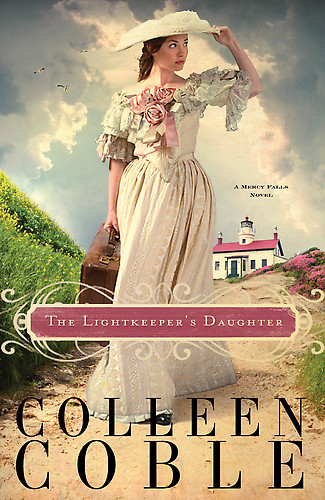 "Colleen Coble has long been a favorite storyteller of mine. I love the way she weaves intrigue and God’s love in to a story chock-full of carefully crafted characters. If you’re looking for an awesome writer—I highly recommend her!”

"Colleen delivers a heart-warming romance—and plot twists that will keep you guessing until the final page! Perhaps best of all, her novels call us to a deeper, richer faith.”

—Tamera Alexander, best-selling author of
The Inheritance
and
Beyond this Moment

"
The Lightkeeper’s Daughter
is a maze of twists and turns with an opening that grabs the reader instantly. With so many red herrings, the villain caught me by surprise.”

—Lauraine Snelling, best-selling
author of
A Measure of Mercy

Publisher’s note: This novel is a work of fiction. Names, characters, places, and incidents are either products of the author’s imagination or used fictitiously. All characters are fictional, and any similarity to people, living or dead, is purely coincidental.

KING JAMES VERSION is in the public domain and does not require permission.

For Ami,
I’m so glad you encouraged me to write this book!
Thanks for always being my champion.

T
HE SHIP’S DECK
rolled under his feet, and he widened his stance to protect his balance and the toddler in his arms. Where was she? He’d been from one end of the steamer to the other. Laura was nowhere to be found. He shifted the sleeping child and eyed the black clouds hovering low on the horizon. A lighthouse winked in the darkening seascape. The wind whipped the waves into a frenzy and tore at the masts. The boat fell into a trough, and the stern rose as the bow tipped. He grabbed at the railing for support. A rumble came to his ears. Thunder? Deckhands rushed by him, and he caught the faint stench of smoke.

“Fire!” a man shouted. “There’s been an explosion!”

He turned to see smoke pouring from the hold. People milled on the deck, and crewmen rushed to lower the lifeboat. He grabbed the arm of a passing crewman and shouted over the howling wind. “The pretty woman with the red hair in a pompadour. Have you seen her?”

“She’s gone. Left first thing this morning before we left the dock. This ship is going down, mate. Get on the lifeboat now!” The man jerked his arm away.

He watched the crewman rush to help panicking passengers into the lifeboat. Gone. How could she leave without a word? Laura would never leave her child. Other people streamed by him on their way to safety, but he stood rooted to the deck until the little girl in his arms whimpered.

He studied her eyes, so like her mother’s. “We must get you to shore,” he said. His purpose found, he strode to the lifeboat. Wide-eyed passengers crammed every seat. Some had other people on their laps. There was no room. Not for him.

He held up the little girl. “Please, someone save her!”

“Hurry, mister!” a crewman yelled. “Throw her into the boat.”

Julia clutched him and wailed. “It’s okay, darling,” he soothed. He kissed her smooth cheek, then lowered her into the woman’s arms. The woman had barely settled the child when the steamer lurched and shuddered. It began to break apart as the lifeboat hit the roiling waves. He watched the men in the boat strain at the oars, but the waves swamped it, and it was making little headway.

He couldn’t stay here or he’d go down with the steamer. Shucking his morning coat and shoes, he climbed to the rail and dived overboard. Cold salt water filled his mouth and nose. He struggled to the surface and gulped in air before another wave caught him. The fury of the current took him under again, and he lost track of how many times he managed to snatch a breath before being thrust toward the ocean floor once more. A dozen? A hundred?

Finally his knees scraped rock, and a wave vomited him from the sea to the shore. Nearly unconscious, he lay gasping on blessed ground. He swam in and out of darkness until his brain regained enough function to remember Julia. His stomach heaved seawater onto the sand, and the retching brought him around. He managed to get on his hands and knees and stayed there a few moments until his head cleared and he could stumble to his feet. He gawked at the devastation scattered across the beach.

The sea had torn the lifeboat to splinters. Bodies and debris lay strewn up and down the coast. Shudders racked his body, and he lurched along the rocks. “Julia!” he called. The wind tossed his words back at him. She had to be alive. He ran up and down the littered shore but found no trace of the little girl he loved nearly as much as he loved her mother.

A
DDIE
S
ULLIVAN’S STIFF
fingers refused to obey her as she struggled to unbutton her voluminous nightgown. The lighthouse bucked with the wind, and she swallowed hard. Her room was freezing, because they’d run out of coal last week and had no money to buy more. Her German shepherd, Gideon, whined and licked her hand. She had to get dressed, but she stood paralyzed.

A storm like this never failed to bring the familiar nightmares to mind. She could taste the salt water on her tongue and feel the helplessness of being at the mercy of the waves. Her parents insisted she’d never been in a shipwreck, but throughout her life she’d awakened screaming in the night, imagining she was drowning. In her nightmare, she struggled against a faceless man who tossed her into the water from a burning ship.

Thunder rumbled outside like a beast rising from the raging waves, and the sound drew her unwilling attention again. “The Lord on high is mightier than the noise of many waters, yea, than the mighty waves of the sea,” she whispered. Her agitation eased, and she reached for her dress.

The front door slammed, and her mother’s voice called out. “Addie, I need your help! Get your kit.”

The urgency in her words broke Addie’s paralysis. She grabbed her dressing gown. The medical kit was in the bottom of her chifforobe cabinet. “Come, Gideon,” she said.

Carrying the metal box of bandages, acetylsalicylic acid powder, and carbolic acid, she rushed down the steps with her dog on her heels. She found her mother in the parlor. The patient lay on the rug by the fireplace. Her mother, lighthouse keeper Josephine Sullivan, stepped back when Addie entered the room. The woman’s overalls and jacket were drenched from the rain and surf.

“You took long enough, girlie,” she said. “I suppose you were hiding in your room.”

Addie eyed her mother’s set mouth, then knelt by the man. “What’s happened? Where is he injured?”

“His arm is swollen. I think it’s sprained. He has several cuts. I found him at the foot of the stairs to the lighthouse. I think he fell. He passed out as soon as I got him in here.” Her mother stepped over to turn on the gaslights. Their hiss could barely be heard above the storm.

“I’ll get you some tea after I tend to our patient,” she said to her mother.

The wind had whipped her mother’s hair free of its pins. Her gray locks lay plastered against her head. The wind rattled the shutters and lashed rain against the windows. “And food. You should have brought me something.”

Addie clamped her mouth shut. The last time she’d tried to take food to her mother as a storm rolled in, her efforts were met with a tantrum. She turned her attention back to her patient. He was in his fifties and had little color in his face. Judging by his clean-shaven jaw, she guessed him to be wealthy and following the fashion of the day. His expensive suit, though shredded, bore out her speculation.

“Help me get his coat off,” Addie said.

Her mother reached for the scissors from her sewing basket. “Cut it off. The clothing is useless anyway.”