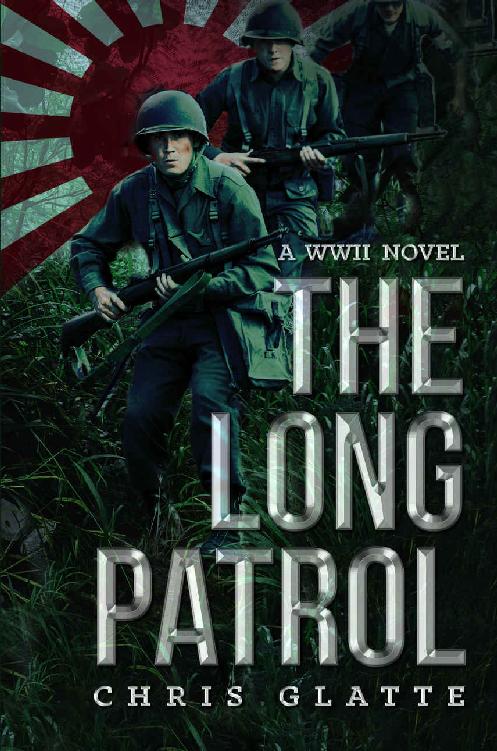 Copyright 2016 by Chris Glatte. All rights reserved. No part of this book may be used or reproduced without the written permission of the author.

This book is a work of fiction. Names, characters and incidents are products of the imagination or are used fictitiously. Any resemblance to actual persons living or dead is coincidental. The setting is the battle of Guadalcanal, however the events depicted do not represent an accurate portrayal of actual historical events.

Don’t miss my soon to be released

Colonel Araki squatted beside Captain Toryu, his pistol drawn. He looked into the dark jungle, but couldn’t see more than a few feet. The night’s torrential rain had stopped. The rising mist gave the jungle an eerie feel. The foreigner, the gaijin told him the village was there only yards away, to him it looked like any other miserable part of this miserable island.

Silent as a snake, the gaijin was beside him, his whisper in his ear startling him. The man could move like an apparition. In the mist, the image sent a shiver down his spine. He suppressed the feeling. “We have the village surrounded, Goro. We are ready for your order to assault.”

The scowl from Colonel Araki could not be seen in the darkness, the tone of his voice gave little doubt to his displeasure. “Do not presume to use the familiar with me Mr. Welch.” He said the name as if he’d stepped in dog shit.

He heard the foreigner swallow and caught the slight movement of his head nod. He looked at his watch, straining to see the translucent dials. The watch was a gift from his father upon his commission into the Army. He remembered Thomas Welch being nearby when his father presented the watch to him. Many hundreds of miles and countless hours of hard victorious battles had passed since that summer day in Tokyo. Now he was reunited with this gaijin whose entire race he’d come to despise. “Tell the men we attack in five minutes.”

Captain Toryu nodded and passed the word to a waiting Sergeant, who scuttled away in silence.

The time passed slowly. At the stroke of five minutes the quiet jungle erupted in noise as six Nambu machine guns opened fire. The guns were joined by the sharp cracks of rifles. All along the line Colonel Araki could see the winking of muzzle flashes through the gloom. The tracer rounds had been removed to keep the machine guns’ locations hidden. The flat firing Nambus were stable platforms. The veteran gunners swept their sectors back and forth. The villagers had little chance of survival.

The guns were joined by the thumping of knee mortar rounds arcing through the air and landing in the village. Colonel Araki wanted to bring the heavier 81mm mortars, but the two day walk through the thick jungle would slow them down too much. The heavy mortars were left behind and the light 37mm knee mortars brought instead. He could tell they were more than sufficient.

The attack was over in minutes. The mortars and machine guns stopped as abruptly as they started and his men rose from the jungle like wraiths. Keeping low they advanced into the village, firing at any movement. In minutes, they’d gone through each hut completing their grisly work.

Colonel Araki stood in the center of the village his pistol ready. He had yet to fire the weapon and was itching for a target. The huts were smoking, some destroyed and on fire. The flames lit up natives sprawled in various death poses. Their flowing blood looked like black tar against their dark skin.

The gunfire was erratic as moaning wounded were finished. Welch trotted up to him with a worried look on his face. “Report,” Colonel Araki barked.

“The attack’s a complete success, Colonel.”

“Then why do you look troubled?”

Welch broke eye contact. He had streaks of blood across his face, not his own. “The Captain isn’t among the dead.”

In desperation Welch said, “He must be close, perhaps he slipped out only minutes ago.” He pointed to the dark jungle, “Perhaps a patrol could…”

Colonel Araki cut him off, “He’s gone, he moves even better than you through this jungle. Finding him will be impossible.” Welch stammered and started to speak. Araki’s hand moved in a blur cuffing his face with a loud smack. Welch yelled out in surprise. “You’ve failed me gaijin.” Welch dropped his eyes to the ground. To continue speaking would bring more pain. Once the man’s mind was made up there was no changing it.

Colonel Araki raised his pistol. For a moment Welch thought he’d shoot him and he felt his bowels loosen, but instead Colonel Araki found another target for his rage. He strode to the edge of a burning hut. His men surrounded a native woman and her squalling infant. As he approached the men sprang to attention.

Colonel Araki addressed a sergeant, “what do we have here, Sergeant?”

The sergeant, a stocky man with bowed legs and hard eyes gave a quick bow. “A survivor, Sir, a captive.”

The woman clutched her crying baby to her bare chest. He noticed the child was much lighter skinned than his presumed mother. Colonel Araki scowled, “these heathens are disgusting. This child’s wail is grating on my nerves, Sergeant.” The sergeant nodded waiting for an order. “Take the baby from her breast.”

The sergeant didn’t hesitate as he slung his rifle and ripped the baby from the woman’s arms. She screamed, tears streaming down her bloodied face, pleading. The sergeant held the baby away from his body like holding something foul. Colonel Araki put the barrel of the pistol against the infant’s screaming face. The woman leaped at him, but the soldiers were ready and grabbed her before she got to him. He pulled the trigger spraying blood and gore onto the sergeant who dropped the lifeless body to the jungle floor.

The woman dropped to her knees clutching for her baby. Colonel Araki safed his weapon, pulled out a white cloth and wiped blood from his hand and barrel. He holstered the weapon and started to walk away. The Sergeant spoke up, “What should we do with her?” he leered.

The Colonel turned, “That’s the men’s reward for a well-coordinated attack, Sergeant. Have your fun then dispose of her. Be quick about it.”

The sergeant smiled showing mangled teeth in the firelight. He gave a quick bow and said, “Hai.”

The woman looked up from her lifeless son as the soldiers pulled her towards a partially destroyed hut. She saw Thomas Welch approaching the officer who’d just killed her baby boy. She pointed and screamed his name. Welch froze, the color drained from his face as he met the eyes of his accuser. The hatred directed at him was palpable. He strode to the knot of men and in Japanese addressed the Sergeant dragging her, “Sergeant,” the soldier scowled at Welch. “Be sure she doesn’t survive.” She struggled to break away, to get at him, scratch out his eyes, but the men pulled her into the dark hut. It was the last time he saw Captain Morrisey’s wife.

Three months later, October 1942 off the coast of Guadalcanal

Elements of the 164th infantry division worked their way down the cargo net ladders to the undulating landing craft. The air was muggy and Private O'Connor thought his Irish ass would melt.

He wondered how a boy born and raised in the woods of Oregon ended up in this hot corner of the world. The men around him were mostly from the mid-western part of the country. He had no idea how he’d ended up with these cornhuskers, but here he was.

He looked down at his next step waiting for the man beneath him, Private Dunphy to move his hand. “Come on Dunphy, hurry your ass up.”

Dunphy scowled at him and kept his methodical pace, not daring to release his hand to give him the finger. One false move and you’d either fall twenty feet to the bottom of the landing craft assuring broken bones or you’d miss and sink to the bottom of the blue Pacific, pulled down by the sixty pounds of gear on your back.

O'Connor had seen it happen, the young kid from South Dakota’s capital. He couldn’t remember his name. He’d sunk like a rock, struggling to release his pack as he shot to the bottom. Even if he’d managed, he went down so fast the pressure probably killed him before he drowned. The vision was still firmly imprinted in his mind. The look in the young man’s eyes as he disappeared into the blue abyss was haunting. He glanced at the green island a mile off and wondered what other experiences he’d soon be unable to forget.

The official name was Guadalcanal, but everyone called it ‘the Canal.’ The fighting had been going on since early August. The 1st Marine Division had landed unopposed and pushed inland to seize the newly constructed Henderson airfield. Of course the Japanese had their own name for it, but to the Marines, it was Henderson.

Henderson was the key to the whole operation. If the Japanese owned the island they’d use the airfield to launch attacks directly against the shipping lanes around Australia and use the island as a rally point for a full on invasion. The allies were determined to stem the steady advance of the Imperial Japanese Army and Navy. They sent nineteen thousand Marines to secure the airfield and the island.

The Marines held off relentless Japanese attacks over the next few months and inflicted heavy casualties, but they took casualties of their own. The jungle was as dangerous as the enemy soldiers, causing mounting casualties from malaria and dengue fever, foot-rot and some diseases the Navy docs had yet to name.

The entire world had heard of the Marines holding off three times their numbers on the miserable little island. Guadalcanal, a name ninety-nine percent of Americans had never heard before the summer of ‘42, was now a household name.

The men of the 164th infantry division were no exception. They’d heard all about the hell they were being sent to. They’d been acclimated to the stifling tropical environment on the island of New Caledonia. They’d spent months training in the jungles, learning the sights, smells and sounds of the harsh environment where they’d meet the enemy.

Now it was October 13th, 1942 and the 164th was offloading troop ships and heading to the beaches at Lunga Point, the same place the Marines had landed three months earlier. No opposition was expected, the Marines had secured the area, but there was the ever-present danger of artillery and marauding Japanese aircraft.

As O'Connor finally jumped from the ladder to the boat he hoped they’d get a move on. Sitting in these damned boats made him feel like a sitting duck. One well-placed artillery shell and they’d all die instantly, shredded shark meat.

He lined up behind Dunphy and watched the last man from the rope ladder enter the boat, Sergeant Carver. Carver was his platoon Sergeant. He was a big man, everything about him was big, his hands, his eyes, his jutting jaw. Even his eyebrows were big and bushy.

The Prince's Texas Bride by Leanne Banks
Murder in the Palais Royal by Cara Black
Constancia and Other Stories for Virgins by Carlos Fuentes
His Dark Lady by Victoria Lamb
Just The Thought Of You by Brandon, Emily
Web Site Story by Robert Rankin
Portal (Nina Decker) by Anna, Vivi
The 823rd Hit by Kurtis Scaletta
Chartile: Prophecy by Cassandra Morgan
Strays by Ron Koertge