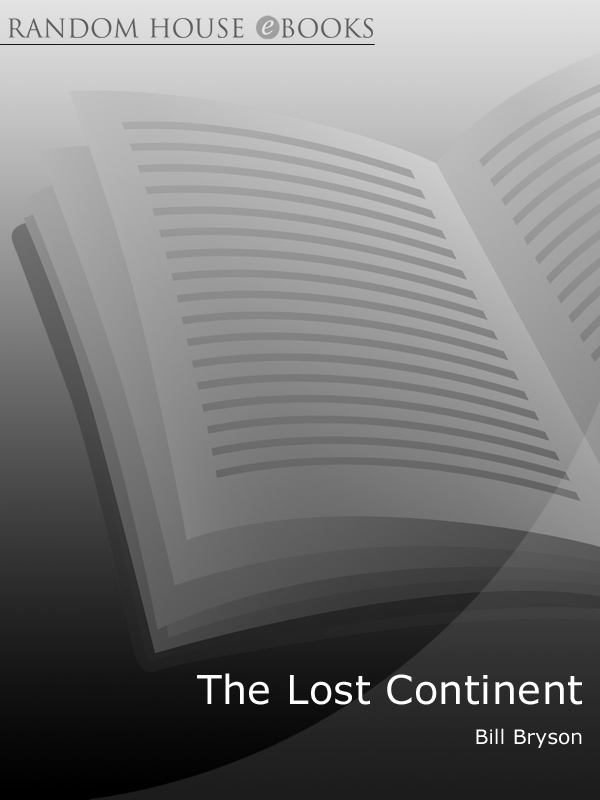 ‘I come from Des Moines. Somebody had to.’

And, as soon as Bill Bryson was old enough, he left. Des Moines couldn’t hold him, but it did lure him back. After ten years in England he returned to the land of his youth, and drove almost 14,000 miles in search of a mythical town called Amalgam, the kind of smiling village where the films of his youth were set. Instead he drove through a series of horrific burgs which he renamed Smellville, Fartville, Coleslaw, Dead Squaw, Coma, Doldrum. At best his search led him to Anywhere, USA; a lookalike strip of gas stations, motels and hamburger outlets populated by obese and slow-witted hicks with a partiality for synthetic fibres. He found a continent that was doubly lost; lost to itself because blighted by greed, pollution, mobile homes and television; lost to him because he had become a foreigner in his own country.

To my father
Acknowledgements

I WOULD LIKE
to thank the following people for their kind and various assistance in helping me during the preparation of this book: Hal and Lucia Horning, Robert and Rita Schmidt, Stan and Nancy Kluender, Mike and Sherry Bryson, Peter Dunn, Cynthia Mitchell, Nick Tosches, Paul Kingsbury and, above all, my mother, Mary Bryson, who still has the best legs in Des Moines.

PART ONE
East
Chapter one

I COME FROM
Des Moines. Somebody had to.

Hardly anyone ever leaves. This is because Des Moines is the most powerful hypnotic known to man. Outside town there is a big sign that says
WELCOME TO DES MOINES. THIS IS WHAT DEATH IS LIKE
. There isn’t really. I just made that up. But the place does get a grip on you. People who have nothing to do with Des Moines drive in off the interstate, looking for gas or hamburgers, and stay for ever. There’s a New Jersey couple up the street from my parents’ house whom you see wandering around from time to time looking faintly puzzled but strangely serene. Everybody in Des Moines is strangely serene.

The only person I ever knew in Des Moines who wasn’t serene was Mr Piper. Mr Piper was my parents’ neighbour, a leering cherry-faced idiot who was forever getting drunk and crashing his car into telephone poles. Everywhere you went you encountered telephone poles and road signs
leaning dangerously in testimony to Mr Piper’s driving habits. He distributed them all over the west side of town, rather in the way dogs mark trees. Mr Piper was the nearest possible human equivalent to Fred Flintstone, but less charming. He was a Shriner and a Republican – a Nixon Republican – and he appeared to feel he had a mission in life to spread offence. His favourite pastime, apart from getting drunk and crashing his car, was to get drunk and insult the neighbours, particularly us because we were Democrats, though he was prepared to insult Republicans when we weren’t available.

Eventually, I grew up and moved to England. This irritated Mr Piper almost beyond measure. It was worse than being a Democrat. Whenever I was in town, Mr Piper would come over and chide me. ‘I don’t know what you’re doing over there with all those Limeys,’ he would say provocatively. ‘They’re not clean people.’

‘Mr Piper, you don’t know what you’re talking about,’ I would reply in my affected English accent. ‘You are a cretin.’ You could talk like that to Mr Piper because (1) he
was
a cretin and (2) he never listened to anything that was said to him.

‘Bobbi and I went over to London two years ago and our hotel room didn’t even have a
bathroom
in it,’ Mr Piper would go on. ‘If you wanted to take a leak in the middle of the night you had to walk about a mile down the hallway. That isn’t a clean way to live.’

‘Mr Piper, the English are paragons of cleanliness. It is a well-known fact that they use more soap per capita than anyone else in Europe.’

I had lived around Mr Piper long enough not to be thrown by this abrupt change of tack. The theft of the 1960 presidential election was a long-standing plaint of his, one that he brought into the conversation every ten or twelve minutes regardless of the prevailing drift of the discussion. In 1963, during Kennedy’s funeral, someone in the Waveland Tap punched Mr Piper in the nose for making that remark. Mr Piper was so furious that he went straight out and crashed his car into a telephone pole. Mr Piper is dead now, which is of course one thing that Des Moines prepares you for.

When I was growing up I used to think that the best thing about coming from Des Moines was that it meant you didn’t come from anywhere else in Iowa. By Iowa standards, Des Moines is a Mecca of cosmopolitanism, a dynamic hub of wealth and education, where people wear three-piece suits and dark socks, often simultaneously. During the annual state high school basketball tournament, when the hayseeds from out in the state would flood into the city for a week, we used to accost them downtown and snidely offer to show them how to ride an escalator or negotiate a revolving door. This wasn’t always so far from reality. My friend Stan, when he was about sixteen, had to go and stay with his cousin in some remote, dusty hamlet called Dog Water or Dunceville or some such improbable spot – the kind of place where if a dog gets run over by a truck everybody goes out to have a look at it. By the second week, delirious with boredom, Stan insisted that he and
his cousin drive the fifty miles into the county town, Hooterville, and find something to do. They went bowling at an alley with warped lanes and chipped balls and afterwards had a chocolate soda and looked at a
Playboy
in a drugstore, and on the way home the cousin sighed with immense satisfaction and said, ‘Gee thanks, Stan. That was the best time I ever had in my whole life!’ It’s true.

I had to drive to Minneapolis once, and I went on a back road just to see the country. But there was nothing to see. It’s just flat and hot, and full of corn and soya beans and hogs. Every once in a while you come across a farm or some dead little town where the liveliest thing is the flies. I remember one long, shimmering stretch where I could see a couple of miles down the highway and there was a brown dot beside the road. As I got closer I saw it was a man sitting on a box by his front yard, in some six-house town with a name like Spigot or Urinal, watching my approach with inordinate interest. He watched me zip past and in the rear-view mirror I could see him still watching me going on down the road until at last I disappeared into a heat haze. The whole thing must have taken about five minutes. I wouldn’t be surprised if even now he thinks of me from time to time.

He was wearing a baseball cap. You can always spot an Iowa man because he is wearing a baseball cap advertising John Deere or a feed company, and because the back of his neck has been lasered into deep crevasses by years of driving a John Deere tractor back and forth in a blazing sun. (This does not do his mind a whole lot of good either.) His other distinguishing feature is that he looks ridiculous when he takes off his shirt because his neck and
arms are chocolate brown and his torso is as white as a sow’s belly. In Iowa it is called a farmer’s tan and it is, I believe, a badge of distinction.

Iowa women are almost always sensationally overweight – you see them at Merle Hay Mall in Des Moines on Saturdays, clammy and meaty in their shorts and halter tops, looking a little like elephants dressed in children’s clothes, yelling at their kids, calling out names like Dwayne and Shauna. Jack Kerouac, of all people, thought that Iowa women were the prettiest in the country, but I don’t think he ever went to Merle Hay Mall on a Saturday. I will say this, however – and it’s a strange, strange thing – the teenaged daughters of these fat women are always utterly delectable, as soft and gloriously rounded and naturally fresh-smelling as a basket of fruit. I don’t know what it is that happens to them, but it must be awful to marry one of those nubile cuties knowing that there is a time bomb ticking away in her that will at some unknown date make her bloat out into something huge and grotesque, presumably all of a sudden and without much notice, like a self-inflating raft from which the stopper has been yanked.

Even without this inducement, I don’t think I would have stayed in Iowa. I never felt altogether at home there, even when I was small. In about 1957, my grandparents gave me a Viewmaster for my birthday and a packet of discs with the title ‘Iowa – Our Glorious State’. I can remember thinking even then that the selection of glories was a trifle on the thin side. With no natural features of note, no national parks, no battlefields or famous birthplaces, the Viewmaster people had to stretch their creative 3-
D
talents to the full. Putting the Viewmaster to your eyes
and clicking the white handle gave you, as I recall, a shot of Herbert Hoover’s birthplace, impressively three-dimensional, followed by Iowa’s other great treasure, the Little Brown Church in the Vale (which inspired the song whose tune nobody ever quite knows), the highway bridge over the Mississippi River at Davenport (all the cars seemed to be hurrying towards Illinois), a field of waving corn, the bridge over the Missouri River at Council Bluffs and the Little Brown Church in the Vale again, taken from another angle. I can remember thinking even then that there must be more to life than that.

Then one grey Sunday afternoon when I was about ten I was watching TV and there was a documentary on about movie-making in Europe. One clip showed Anthony Perkins walking along some sloping city street at dusk. I don’t remember now if it was Rome or Paris, but the street was cobbled and shiny with rain and Perkins was hunched deep in a trench coat and I thought, ‘Hey,
c’est moi
!’ I began to read – no, I began to
consume
–
National Geographics
, with their pictures of glowing Lapps and mist-shrouded castles and ancient cities of infinite charm. From that moment, I wanted to be a European boy. I wanted to live in an apartment across from a park in the heart of a city, and from my bedroom window look out on a crowded vista of hills and roof-tops. I wanted to ride trams and understand strange languages. I wanted friends named Werner and Marco who wore short pants and played soccer in the street and owned toys made of wood. I cannot for the life of me think why. I wanted my mother to send me out to buy long loaves of bread from a shop with a wooden pretzel hanging above the entrance, I wanted to step outside my front door and
be
somewhere.