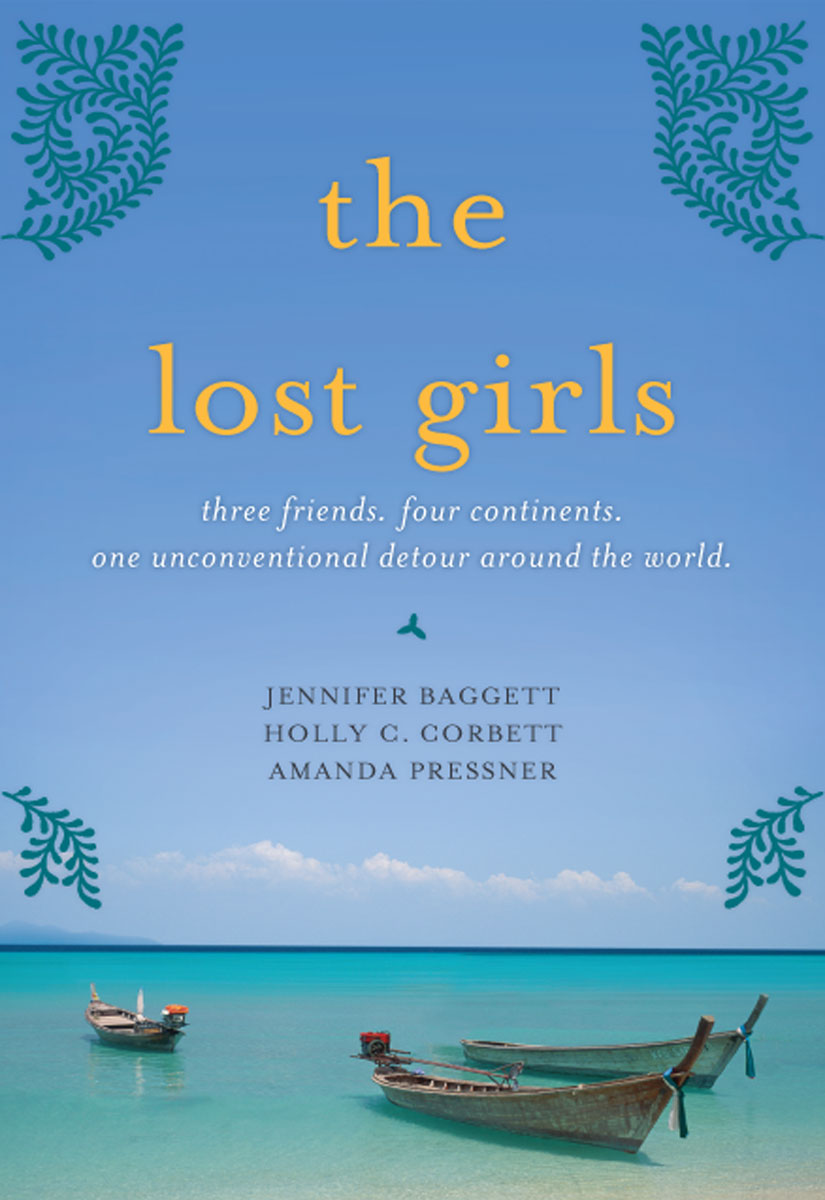 Three Friends. Four Continents.
One Unconventional Detour Around the World. 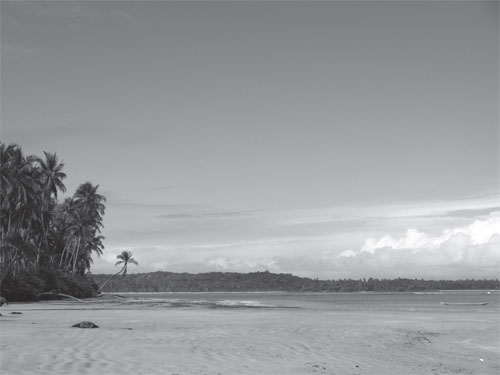 To our parents, for always supporting us
on our journeys, no matter how far-fetched
or far-flung.

And to all the other Lost Girls out there
trying to find their way.

“The world is round and the place which may seem like the end may also be the beginning.”

W
e weren't sure what we'd just heard or if there had been any sound at all, but the three of us felt a palpable shift in the atmosphere. One by one, our footsteps slowed to a halt. We stood frozen in the grassy clearing outside our hut, watching tiny knots of people push their way down the hillsides and into the valley below. Some were carrying staffs, and most were draped in brilliant swatches of scarlet, eggplant, cerise, and cerulean. The fabric pressed against their long limbs and billowed back out again, like wind filling dozens of spinnaker sails.

The three of us had encountered plenty of unusual scenes during the four weeks we'd been volunteering in rural southwestern Kenyaâchickens riding shotgun in
matatu
vans, locusts for sale as snacks, children helping to birth calves during school recessâbut we had yet to see anything as extraordinary as this. Brief snatches of words, almost like chanting, drifted through the fields all around us. As the sounds grew steadily louder, pulsing in a call-and-repeat rhythm, Emmanuel and his wife, Lily, our program coordinators, emerged from inside the hut and stood beside us.

They smiled when they saw our expressions and explained
what we were witnessing: the people streaming down the hillside were Maasai, a seminomadic East African tribe that was one of the most colorfulâand certainly the most recognizableâin this part of the world. Many were friends and neighbors, but others had traveled long distances, some from days away, to reach our host family's farm.

Emmanuel and Lily, both members of the Maasai, had suggested that we come during this particular week in October, so our visit could coincide with a traditional ceremony performed on the crest of a hill near their home. We'd arrived as scheduledâbut still hadn't had any idea what to expect.

She ushered us back inside the hut and showed us a small table covered with handmade jewelry. She selected three elaborate oval collars packed tightly with rows of turquoise, cobalt, and royal blue beads and gestured for us to put them on. As we helped one another fasten and secure the heavy pieces around our necks, the chanting outside grew even louder and was now punctuated by the sound of a beating drum.
Kung-ka-kung-ka-kung-ka
. It reverberated through the valley, and our pulses quickened to match the tempo.

“We are ready. Let's go,” said Lily, motioning us to follow Emmanuel outside and along an incline that started at the edge of their property. We walked for several minutes, breathing hard as we pressed our way up the rocky backbone of the hill. As the thin path converged into a larger trail, we fell into step with several Maasai heading in the same direction we were.

Although we'd observed their migration from a distance, we weren't prepared for what we encountered after pushing through the last stand of trees. A massive group of men, women, and children, literally hundreds of locals, had gathered in a clearing at the top of the hill.

The women had tied sheets of pale yellow and beige fabric over deep sienna-colored shifts accessorized with beaded necklaces, bangle bracelets, and dangling earrings. They had encircled their slim waists with animal-hide belts studded with cowrie shells and adorned their heads with delicate tiaras made of copper, leather, and beading. Many of the men wore T-shirts and sports jerseys under the brightly hued clothes we'd spotted against the hillside earlier. They too wore jewelryâchokers, arm cuffs, earrings, and fur headdresses. The volume of the chattering around us increased until it reached a fever pitch, then, almost at once, dropped off entirely.

“Come now, the ceremony is about to begin,” whispered Emmanuel, beckoning us to sit down.

Moments later, the tribesmen began the traditional
moran
warrior dance, leaping through the air in near-impossible feats of vertical prowess. Then, once the men's ritual ended, we watched the women move in to form a wide semicircle in the clearing.

As they began to sway and clap, slanted rays of sun lit up the beads in their jewelry and glinted off a young woman's copper headband. It was hard to tell for sure, but she looked to be in her late twenties, just about our age. Even though her face was smudged with ocher, a greasy red paint that coated her features like pancake makeup, her expression still revealed the connection she had with the other women.

For several minutes, they sang and clapped in unison, their voices folding over and into one another to become a single, powerful track. Grasping hands, they swung in a wide circle, their words growing urgent and more intense. Around and around they went, whooping and shrieking as they picked up speed. The mood was electric, the dance the most joyous form of expression. We were leaning forward on the blanket, absorbing the energy that swelled and sparked like a thundercloud,
when suddenly three women broke from the formation and grabbed our hands.

We were all caught off guard (maybe the women meant to reach for someone else?), but there was no mistake about it: we'd been invited to join them. Accepting without a wordâjust a quick glance at one anotherâwe allowed ourselves to be pulled into the swiftly moving orbit of the Maasai.

Of course we didn't know the steps or how to sing along, but it didn't matter. As we collectively spun like an out-of-control carnival ride, we did our best to swing our hips and move our feet like the other women. They watched from across the circle, throwing their heads back in fits of hysterical laughter at the artless antics of the foreign girls who looked clumsier (and dizzier) with every step.

Then, just as we thought the dance was winding down, the women began embracing us in a full-body, cheek-to-cheek hug. They repeated the love fest over and over again, one by one, until our cheeks and chins and foreheads were fully smudged with ocher. It wasn't until we pulled back and caught a glimpse of one anotherâthe enormous necklaces, the beads, the red streaks running across our facesâthat we figured out what every other person must have already known: We hadn't hiked up here to watch the ceremony as spectators. We had come to be initiated.

If we still weren't convinced, Lily delivered the final confirmation.

“You are Maasai now!” she shouted, her face glowing as the other women cheered. She was the last one to cross the circle and draw us into an embrace, making sure every inch of our faces was coated in red.

Between our burning lungs and this unexpected piece of news, none of us could speak. What's the right thing to say when you've been brought into the inner circle, literally, to join
the ranks of spiritual, beautiful wanderers? The life we'd left behind in New York Cityâonce all-consumingânow seemed like ancient history and as far away as a distant star.

A
s the three of us descended the hill later that afternoon, we walked in relative silence. Our initiation into the Maasai may have been purely ceremonialâa gift to us from Lily, Emmanuel, and their fellow tribespeople. But it reminded us how far we'd come since leaving our apartments, jobs, and loved ones behind in the United States to travel the globe.

When we'd first started plotting this adventure nearly two years earlier, the three of usâfriends in our midtwentiesâhad shared the desire to take a giant step away from our own goal-oriented worlds to get a better sense of who we wereâand what we really wanted from our lives. Up until then, we'd successfully hit the milestones that are supposed to give young women a sense of purpose: Moving away from Mom and Dad. Graduating from college. Getting our first jobs. Falling in love.

But as we rocketed toward the next major stage (the one involving mortgages, marriages, and 2.2 children), we all wondered: Were the paths that we were heading down the right ones for usâor were we simply staying the course because we thought we
should
? Was the road most frequently traveled the one that we wanted to follow?

Finding it difficult to gain perspective while living and working in New York City, we decided to take an unconventional detour: a 60,000-mile, round-the-world journey that would lead us across four continents and more than a dozen countries. Dubbing ourselves “The Lost Girls,” a term describing both our own uncertainty about the future and an emotional state we felt represented many in our generation, we committed to spending one year of our late twenties wandering the globe. We
were searching for answers, but as we'd learn along the way, the ones you uncover are rarely those to the questions asked.

If we could transport ourselves back in time, we might tell our younger selves not to worry so much. Not to sweat the small stuffâor even the big stuff. We'd say that real life is the thing that happens when you're busy trying to map out your future. Then again, maybe we wouldn't tell them a thing. Those lessons might have made the last years of our twenties a little easier, but we wouldn't have traded our on-the-road initiation for the world.