The Lost Girls of Johnson's Bayou 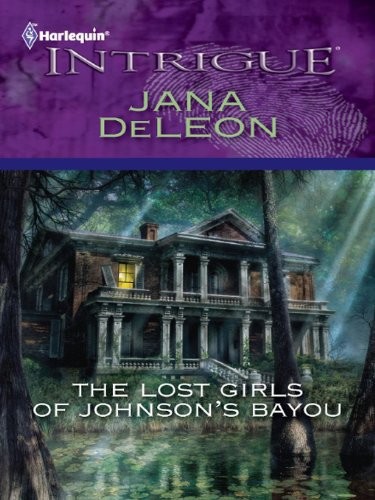 Who is Ginny Bergeron?

She was only six when she walked out of the swamp after the LeBlanc School for Girls caught on fire. Sixteen years after the terrifying night that stole her memory, a child’s scream lures Ginny back into the woods…where a strong arm encircles her. The gun-wielding stranger is Paul Stanton, a cop-turned-P.I., who’s come to Johnson’s Bayou looking for answers of his own.

Paul has spent almost two decades searching for his missing sister and now, this Southern beauty could be the key to his quest. But someone would rather see Ginny dead than have her memories resurface. And although uncovering the dark secrets of the past could put them both at risk, it’s a chance Paul’s willing to take if it means finding his future…with Ginny.

“You’re not a coward,” Paul said and placed his hand over hers.

“You were surviving. And if you hadn’t put it all out of your mind, he would have come after you before now. Before you were better prepared to deal with it.”

Ginny gave him a small smile. “Before you were here to help me.”

Paul squeezed her hand. “We’re going to get through this, and then your life can be about the future and not the past.”

Paul’s words hung in the air as if to tease her with possibilities that she knew would never be. She raised her gaze to his and realized just how close to her he was. He leaned in to kiss her and her body responded before her mind could put on the brakes.

The Lost Girls of Johnson’s Bayou

Jana DeLeon grew up among the bayous and small towns of southwest Louisiana. She’s never actually found a dead body or seen a ghost, but she’s still hoping. Jana started writing in 2001 and focuses on murderous plots set deep in the Louisiana bayous. By day, she writes very boring technical manuals for a software company in Dallas. Visit Jana at her website, www.janadeleon.com.

1265—THE SECRET OF CYPRIERE BAYOU

1331—THE LOST GIRLS OF JOHNSON’S BAYOU

Don’t miss any of our special offers. Write to us at the following address for information on our newest releases.

Ginny Bergeron
—No one knew who she was or where she came from, including Ginny. But she made her home in Johnson’s Bayou and tried not to think about her mysterious past. Then Paul Stanton showed up, looking for answers.

Paul Stanton
—He was separated from his sister by the foster care system seventeen years ago and is determined to find out what happened to her. His answers may lie in Ginny’s flickering memories, but his growing attraction to his potential witness isn’t sitting well with the P.I.

Madelaine Bergeron
—She adopted Ginny after the fire and raised her in Johnson’s Bayou. She made a normal life for Ginny, but is afraid the past has come back to haunt her.

Josephine Foster
—Everyone sees the tiny, silver-haired woman and assumes she’s harmless, but Josephine knows more about the secret lives of Johnson’s Bayou residents than the sheriff.

Saul Pritchard
—He was the caretaker at the LeBlanc School, but were his pursuits limited to repairing only the home?

Thomas Morgan
—He was the contractor in charge of the construction of the LeBlanc School, with a shady past and a lot of unexplained cash.

Mayor Joe Daigle
—Johnson’s Bayou’s mayor would do anything to keep the sixteen-year-old horror from resurfacing in his town.

Sheriff Thomas Blackwell
—He was the chief investigator for the fire at the LeBlanc School, but did he know more than what was reflected in the police reports?

To my mentor and friend, Jane Graves, for being so willing to share all your knowledge with a rank beginner.

Ginny Bergeron stood in front of the café’s plate-glass window and stared into the swamp. The setting sun cast an orange glow on the cobblestone street in front of the café and the thick range of cypress trees that littered the swamp beyond the edge of the small town. It was the same view she’d had every day for sixteen years, yet today, it felt different. As if something wasn’t right.

“You gonna finish cleaning that coffeepot or just stare out the window all day?”

The booming voice of the heavyset woman behind her made Ginny jump, and she spun around to face Madelaine, the woman who was, for all practical purposes, her mother.

“Sorry,” Ginny said. “I guess I wandered there for a minute.”

Madelaine gave her an understanding smile and glanced out the window. “It’s a beautiful sunset. I finished up in the back, so as soon as those coffeepots are washed, we can leave.” She grabbed one of the pots off the warmer behind the counter. “Since you’re up here lollygagging, I’ll help.”

Ginny smiled at Madelaine’s teasing, more because she knew her mother expected it than because she felt like smiling. The beautiful sunset wasn’t what had caught Ginny’s attention. In fact, Ginny couldn’t put her finger on exactly why she’d been staring out the window, or what she expected to see. But she could feel it—something out there didn’t belong.

Ginny grabbed the half-empty coffeepot off the table where she’d placed it a couple of minutes earlier and headed behind the counter. Madelaine already had hot water running in the huge stainless steel sink, so Ginny poured out the old coffee and stuck the pot under the stream of water. Some of the steamy water splashed onto her bare hands and she flinched. Her mother glanced over at her bare hands and shook her head, her expression one of long-standing exasperation worn by parents who’d told a child something over and over again in vain.

“I have a pot roast in my Crock-Pot,” Madelaine said. “Why don’t you come over for dinner and a movie?”

“Great minds think alike. I put a roast in my Crock-Pot this morning.”

Madelaine wiped the coffeepot with a clean rag and set it on the counter. “Well, if you’re sure.”

“I’m sure,” Ginny said and placed her clean coffeepot on the counter next to her mother’s.

“I guess we’ll both be eating pot roast for a week then.” Madelaine stared at her for a moment, the uncertainty clear on her face, but finally, being a parent won out. “I worry about you spending so much time alone. You sure you’re all right? You’ve seemed on edge lately.”

“I’m fine, and I’m perfectly happy alone. I have a good library of books.” She smiled. “You ought to know, since you gave me most of them.”

Madelaine didn’t look convinced. “A book isn’t the same as having someone else around. Like a man. Then maybe I wouldn’t worry as much.”

“Really? I haven’t noticed that being a problem for you. In fact, in my years with you, I’ve never known you to even date.”

Madelaine waved a hand in dismissal. “That’s not the point. I made my choices long ago, and I’m happy with them. I had my run at that hill in my earlier years. Enough to know it wasn’t for me. But you haven’t so much as taken a step toward it.”

Ginny shook her head. “You know good and well that the only single men in Johnson’s Bayou are under ten or over sixty. Which would you prefer I take up with?”

“Ain’t no one saying you got to remain here the rest of your life. That university in New Orleans wanted to give you a scholarship before. I bet you could get one again.”

“Leave. Leave all this behind and start a new life. A good life.”

Ginny placed a hand on Madelaine’s arm. “I have a good life. Maybe someday I’ll want something different, something else, but for now, this is what’s right for me.”

Madelaine sighed and kissed Ginny’s forehead. “All right then. I’ll see you tomorrow morning. Ought to be a busy one with everyone in town preparing for the Fall Festival.”

Ginny nodded then followed Madelaine to the front door of the café and locked it behind her. Ginny gave the café a final glance to make sure everything was in order, then hurried up the staircase at the back of the café kitchen to her apartment.

The apartment consisted of a small living area, an even smaller bedroom and a tiny kitchenette and bathroom. Madelaine had provided her with a worn couch that Ginny had recovered in coarse fabric with light blue and white stripes. An old nineteen-inch television sat across from the couch on a stand with peeling paint that Ginny had bought at a garage sale but hadn’t had time to refinish.

She’d taken her bedroom set with her when she’d moved out of her mother’s house, and the bed, dresser and nightstand left only a small walking area in the narrow bedroom. The kitchen had room in the corner for a tiny table and two chairs, but nothing else. Some people probably wouldn’t consider it much, but for Ginny, it was perfect.

What some would see as sparse, Ginny saw as uncomplicated.

Her life in Johnson’s Bayou certainly hadn’t started out that way, but Ginny had been determined to make it that way. She’d always found comfort in knowing that today was the same as yesterday and would be the same as tomorrow. But lately, complicated thoughts had roamed her mind, unbidden. Despite her attempts to ignore them or change her mode of thinking, the thoughts kept popping back up, unwanted and uncomfortable.

She laid her keys on the breakfast table and opened the blinds on the window behind the table. The sun had almost disappeared behind the swamp, but she could still see the roofline of the old mansion just above the top of the cypress trees. The LeBlanc School for Girls. Or at least it had been.

What had happened there sixteen years ago? And had she been a part of it? Is that why the house seemed to call to her in the night? All these years, she’d had no inkling of her past, as if her mind had been scrubbed clean of the first six years of her life. She had no answers to the bizarre questions that surrounded her arrival in Johnson’s Bayou, despite a significant amount of effort by the local police into searching for those answers.

Ginny had never searched for answers.

Sometimes she thought it was because she was afraid of what she’d find. Other days, she thought it was because nothing she found would change who she was today, and that’s all that mattered. Curiosity had never compelled Ginny to visit the LeBlanc School. The police said the fire had completely destroyed the room the resident records were housed in, so no answers were contained there now, even if they had been before.

Drummer Boy by Toni Sheridan
Mary Anne Saves the Day by Ann M. Martin
Mail Order Romance Bundle #1 by Lisa Page
Textos fronterizos by Horacio Quiroga
A Kiss With Teeth by Max Gladstone
Rivers of Gold by Tracie Peterson
Firemask: Book Two of the Last Legion Series by Chris Bunch
Knock Out (Worth the Fight) by Mannon, Michele
Zoe in Wonderland by Brenda Woods
A Spirited Gift by Joyce Lavene