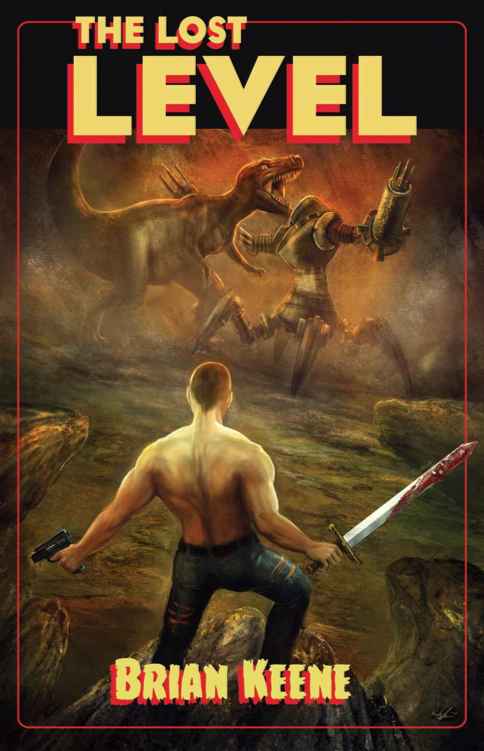 All rights reserved. No portion of this book may be copied or transmitted in any form, electronic or otherwise, without express written consent of the publisher or author.

This novel is a work of fiction. All the characters and events portrayed in these stories are either fictitious or are used fictitiously.

4 — Breakfast with the Reptilians

6 — Under the Light of Night

11 — Slaughter on the Shoreline

13 — Ghosts of the Fourth Reich

For
Mark and Paula Beauchamp…

Thanks, first and foremost, to Jason Sizemore and the Apex Books team for their infinite patience and understanding when this project inexcusably went way beyond deadline. Thanks, as well, to Maurice Broaddus for preventing them from killing me. Thanks also to my valiant pre–readers, Mark “Dezm” Sylva, Tod Clark, and Stephen “Macker” McDornell—and also to Bryan Smith and Mary SanGiovanni who acted as additional pre–readers. Thanks to the Apex editorial team: Lesley Conner, Sara Price, and Janet Harriett. Thanks to the cover artist Kirsi Salonen. Thanks, as well, to John LeMay, for lending me his Jeep. Thanks to Cassandra, Kasey Lansdale, and Kelli Owen. Special thanks to Joe R. Lansdale for convincing me to step outside my comfort zone. And as always, more than anyone else, thanks to my sons.

MY NAME IS
AARON PACE
, and I’m writing this by hand in a spiral–bound, college–ruled
notebook that I found in a student’s backpack inside of an abandoned school
bus. All three—the notebook, the backpack, and the school bus—have seen better
days. For that matter, so have I.

The notebook paper is wrinkled and curled, and many of the pages
are water stained or smudged with dirt. The backpack is one of those vinyl and
canvas kinds you can buy at Wal–Mart, emblazoned with cartoon characters on the
back. I don’t recognize any of the cartoon characters, but there are a lot of
things in this place that I don’t recognize, because they’re not originally
from this world. The backpack is one of those things. I found it attached to a
child’s skeleton in the back of the bus. It is still in relatively good
shape—the backpack, rather than the skeleton—but both shoulder straps have been
slashed, rendering it useless and impractical for my purposes. The skeleton is
missing its lower half. The hips and pelvis are shattered. I have no way of
knowing if that happened before or after the child died, but I suspect it was
the former. The bus has some broken windows, four flat tires, and a giant gash
in the side where something clawed through the metal to get at the kids inside.
There are dried brown smudges splashed all over the vehicle’s interior. The
splashes could be old dirt, but dirt doesn’t usually have a spray pattern. More
likely, they’re blood.

There is a lot of it, but then again, that’s also not uncommon to
this place. This is the Lost Level. This is where things become lost. Why
should blood be any different?

It’s impossible to know how long the bus, the backpack, or the
skeleton have been here, because there is no time in the Lost Level. The sun—if
that’s what it is, and I have strong suspicions that it’s not—never changes
position in the sky. We live in a perpetual state of high noon. If we have a
moon or stars here (or things masquerading as moons and stars) then I’ve never
seen them. The only visible body in the heavens above is that ever–present sun,
mocking us with its cruel, unforgiving light. But despite the constant
illumination, it is easy to find darkness here. There are deep canyons and a
massive, spiraling network of caves and tunnels below ground where the light
never reaches, and there are sections of the forests and jungles where the
vegetation grows so thick that the sun’s rays can’t penetrate it. Go look in
any of those places, and you will find darkness.

And if you can’t find it there, then all you have to do is look
inside yourself.

There is a darkness inside of me. I have lost everyone that I
care about—from both before I came here, and after. Especially after. They are
lost, and I am lost.

Lost here in the darkness of an eternal sunshine.

Lost in the Lost Level.

Anyway, I suppose I should recount how I got here and what has
happened to me since then, before this pen goes dry or I run out of paper. Or I
get eaten. Or worse. I’ve given up hope that anyone from back home will ever
read this, but it’s important to me that I get it down on paper regardless, if
only just to prove that I once existed. That I was once alive, and had thoughts
and feelings. It would be nice if, after I am gone, others knew my story.
Perhaps, one day, someone from my world will stumble across this notebook, and
read what I have written here, and I will live again, if only for a little
while and if only within these words. And who knows? Maybe that’s what passes
for an eternal life inside this place. Perhaps that is the best we can hope for
in the Lost Level.

I doubt there is enough paper for me to tell you everything. I’d
need a dozen notebooks or more for that. But it is my sincere hope that I can
at least tell you how I came here and what happened after. That I can tell you
about Kasheena and Bloop. If you have just arrived here, some of this
information might just save your life.

I’ll write as much as I can, until I run out of room. Which, when
you think about it, is how life goes. Our story continues until there are no
pages left to write it on.

So…my story. I was born and raised in Byron, Minnesota. My father
was a Methodist minister and my mother worked from home part–time as a court
stenographer. Every day, they’d send her audio recordings of court cases, and
she would transcribe them. It seemed like boring work, but I never heard her
complain. I had two siblings—an older brother and a younger sister. We were
never wealthy, but our parents made sure we never wanted for anything, either.
In short, I had a good, safe, middle–class upbringing. We lived in a parsonage
next to the church, who paid for the home, thus freeing my parents of the
responsibility of a mortgage.

As a kid, I read a lot of comic books and paperback novels.
Sometimes I wonder if people back home still do. Read paperback novels, that
is. Right before I came here, there was a lot of talk about electronic books. I
doubt something like that would ever truly replace printed books, but I can’t
be sure. Some of the things I’ve found here can only have come from a future
timeline, and given that they are far enough advanced that I can’t figure them
out, reading a book on a computer doesn’t seem so far–fetched anymore.

Anyway, I was a voracious reader. I especially enjoyed sword and
sorcery tales and loved reenacting them in the woods behind the church. Using
sticks or plastic swords, I fought mock battles with my brother and our
friends. In high school, I took up fencing. I also joined a Historical
Reenactment Society and worked summers at the local Renaissance Fair. Both
activities allowed me to hone my sword–fighting skills even more. When not
doing that, I dabbled in Live Action Role–Playing games with my friends. Not
only was I proficient with a sword, I also became pretty good with firearms,
thanks to the father of a friend of mine who used to take us target shooting
and deer hunting each year. Tramping around the Minnesota wilderness in winter
will toughen up any kid. I was a deadly shot with a rifle, bringing down my
first buck—a six pointer—when I was twelve. With a pistol, from a distance of
seventy–five yards, I could put a grouping of six shots close enough together
to fit a half–dollar over them. Eventually, I earned varsity letters for
football and wrestling, as well.

I hope you don’t get the wrong impression. I wasn’t a jock by any
means. If anything, I was considered an oddity by my fellow teammates because
of my interest in things like reading and the fact that, in addition to my
athletic ability, I studied and applied myself and got good grades. Indeed, my
books granted me educational opportunities that my otherwise middle–class
upbringing could have never afforded.

Something else I discovered in high school was a rabid interest
in occultism and religions other than Christianity. Maybe this was my own form
of teenage rebellion against my father, although if so, I wasn’t consciously
aware of it. I loved my father. I respected him and the rest of my family, as
well. But all the same, I didn’t share my family’s beliefs. When I sat there in
church on Sunday and listened to my father’s sermons, I didn’t feel anything.
In truth, I would venture that a portion of the rest of the congregation didn’t
feel anything either. That had nothing to do with my father’s skills as an
orator. He was passionate and emotive and always tried to make things
interesting. Overall, he was an excellent speaker. Despite this, I sometimes
glanced around and saw old men sleeping, women balancing their checkbooks or
fanning themselves with church programs and staring off into space with dazed
expressions, and small children playing with cars or dolls beneath the pews. It
eventually dawned on me that these people were not there every Sunday because
they believed, or because they enjoyed listening to my father speak. They were
there only because it was what they were expected to do. They were expected to
attend church services every Sunday. For them, it had become habit. Routine.
The church lacked energy. It lacked spirit. That bothered me. I wanted to feel
that universal spirit I’d heard so much about. I wanted to be filled with it.
And if I couldn’t find it with God, I reasoned, then perhaps I would have
better luck finding it elsewhere.

Save Me (The Me Novellas) by Appel, Liz
Dreams Ltd by Melan, Veronica
Warriors of the Night by Kerry Newcomb
The Scandalous Adventures of the Sister of the Bride by Victoria Alexander
Vettori's Damsel in Distress (Harlequin Romance Large Print) by Liz Fielding
The Book Thing by Laura Lippman
Wolf at Law by Heather Long by Heather Long
Leon Uris by The Haj
Aliens Versus Zombies by Mark Terence Chapman
The Trouble with Fate by Leigh Evans