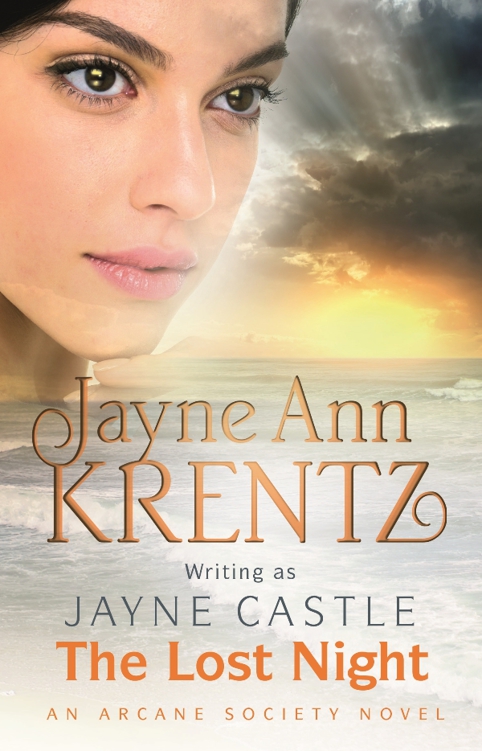 Jayne Ann Krentz
is the critically-acclaimed creator of the Arcane Society world. She also writes as
Amanda Quick
and
Jayne Castle
. Jayne has written more than fifty
New York Times
bestsellers under various pseudonyms and more than thirty-five million copies of her books are currently in print. She lives in the Pacific Northwest.

The futuristic novels she writes as Jayne Castle all feature her customary irresistible mix of passion and mystery, and also have a strong psychic/paranormal twist.

Ladies of the Lantern series
:

Other titles by Jayne Ann Krentz

Other titles by Jayne Ann Krentz

A Note from Jayne

For Darwina, who knows a great role model
when she sees one. Amberella rules!

A Note from Jayne

Welcome to Rainshadow Island on the world of Harmony.

In the Rainshadow novels you will meet the passionate men and women who are drawn to this remote island in the Amber Sea. You will also get to know their friends and neighbors in the small town of Shadow Bay.

Everyone on Rainshadow has a past; everyone has secrets. But none of those secrets is as dangerous as the ancient mystery concealed inside the paranormal fence that guards the forbidden portion of the island known as the Preserve.

The secrets of the Preserve have been locked away for centuries. But now something dangerous is stirring.…

I hope you will enjoy the Rainshadow novels.

“You belong to me,” the vampire said. “Soon you will understand that you
are meant to be my bride. No matter what happens to me in this place, I will escape and I will come for you.”

Marcus Lancaster’s voice was rich, compelling, and resonant, the voice of an opera singer or the ultimate con man. He accompanied the words with a sly whisper of compelling energy that shivered with promise.
I can fulfill your deepest desires
.

Rachel Blake did not doubt for a moment that he truly did want her, but she was certain it was not because he had fallen in love with her. Lancaster was one of the monsters. That crowd didn’t have the capacity to love. They were inclined,
however, to be obsessive in their desires and, therefore, quite dangerous.

“I knew this was a waste of time.” Rachel gathered up her notepad and pen and got to her feet. The silvery charms attached to her bracelet shivered and clashed lightly.

“You cannot run from me, my beloved,” Lancaster said. He reached up with one well-manicured hand and touched the ear stud in his left ear. The small item of jewelry was made of black metal and set with a stone that was the color of rain.

The gesture was casual; made in an absent manner, as if Lancaster was not aware of what he was doing. But the hair on the back of Rachel’s neck stirred. A chill of intuition raised goose bumps on her arms. Her palms went cold.

Lancaster wore another piece of jewelry, too, a discreet signet ring engraved with the image of a mythical Old World beast, a griffin.

She had shut down her senses so she wouldn’t have to view Lancaster’s aura, but there were traces of his energy on the table and everything else that he had touched in the room. She could not abide the way he was watching her. She had to get out of there.

She looked at the one-way window set into the wall as she went toward the door and raised her voice a little to make sure her unseen audience could hear her.

“That’s it, Dr. Oakford. I’m finished here. There’s nothing I can do with this one.”

She did not have to see the faces of Dr. Ian Oakford and the other members of
the clinic staff who were observing the therapy session to know that they were all reacting with shock and outrage. Ditching a patient the way she had just done was extremely unprofessional. But she no longer cared. She’d had enough of Oakford and his team, enough of their research, enough of trying to fit in to the mainstream world of clinical para-psychology.

A woman—at least one who had been raised in a Harmonic Enlightenment community—could take only so much. Her parents and her instructors at the Academy were right. She was not cut out for mainstream life.

Most people would not have known Lancaster for what he was. Tall, blond, blue-eyed, and handsome in a slick, distinguished way, he was a natural-born predator that moved easily among his prey. But the dark side of her talent for aura healing was the ability to see the monsters and recognize them for what they were.

Lancaster had made a tidy fortune in the financial world. But a few days ago he had shocked his associates and his clients when he had voluntarily committed himself to the Chapman Clinic. He claimed to be plagued with severe para-psych trauma induced by the death of his wife several months earlier. His symptoms consisted of nightmares and dangerous delusions—precisely the severe symptoms required to be admitted to Dr. Oakford’s new research program at the clinic.

She opened the door, stepped out into the hall, and signaled to the waiting orderly.

“You can take Mr. Lancaster back to his room, Carl,” she said. “We’re finished.”

Carl moved into the therapy room.

“Time to go, Mr. Lancaster,” he said in the soothing, upbeat tone he used with all of the patients.

He got to his feet with leisurely grace, as though he were still dressed in the elegant silver gray suit and white tie that he had been wearing when he had walked into the clinic. Credit where credit was due, Rachel thought. Lancaster managed to make the baggy shirt and trousers that were standard issue for all patients look like resort-casual attire.

“Do you think she’s afraid of me, Carl?” Lancaster infused his mellifluous words with just the right tincture of regret. “The last thing I want to do is frighten her.”

“An excellent question, Carl. One that only Rachel can answer.”

Rachel ignored both of them. The tiny stones set into her charms were starting to brighten. That was not a good sign because she was not consciously heating the crystals. They were reacting to her anxiety, a strong indication that her current state of psychical awareness and control was anything but harmonically tuned.

This was it, she thought. Lancaster was the last straw. She was going to hand in her resignation. The money was good at the clinic and the work provided the illusion that, in spite
of what everyone back home said, she could make a place for herself in the mainstream world. But she had not signed on to deal with monsters like Marcus Lancaster. Nor was he the only one enrolled in the research trial. There was a very good reason why the patients in Oakford’s project were housed in a locked ward.

She was an aura healer. She needed to use her talents in a positive way.

According to mainstream theories of para-psychology, energy-sucking psychic vampires were a myth; the stuff of horror novels and scary movies. But Rachel had met a few in her time and she knew the truth. The monsters were real. The good news was that most of them were relatively weak. They tended to pursue careers as con men, cult leaders, and politicians. They preyed on the emotionally vulnerable and the gullible.

Nobody denied that such low-level human predators existed, but few thought of them as vampires or monsters. Psychology textbooks, therapists, and clinicians had invented more politically correct terms to describe them. The diagnostic descriptions often involved the phrase
personality disorder
or
para-sociopath
. But the ancients back on the Old World had gotten it right, Rachel thought. So had the philosophers who had founded the Harmonic Enlightenment movement and established the Principles of Harmonic Enlightenment. The correct description for the Marcus Lancasters of the world was
evil
. When that particular attribute was coupled with some paranormal talent, you got psychic vampire.

The question that was worrying her the most was why Lancaster was attracted
to her. She knew it was not love or even simple lust that had made him fixate on her out of all the members of the clinic staff. She had learned at the Academy that it was the prospect of controlling others that fascinated the monsters. By the nature of her own psychic ability and training she possessed a high degree of immunity to their talents. But she suspected her immunity was the very quality that had drawn Lancaster’s attention. She was a challenge to him. Seducing and controlling her would affirm his own power.