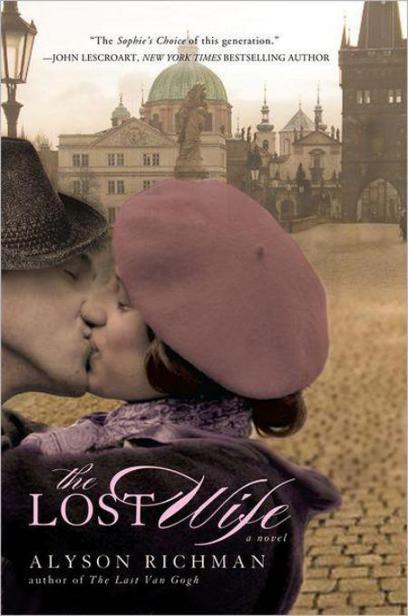 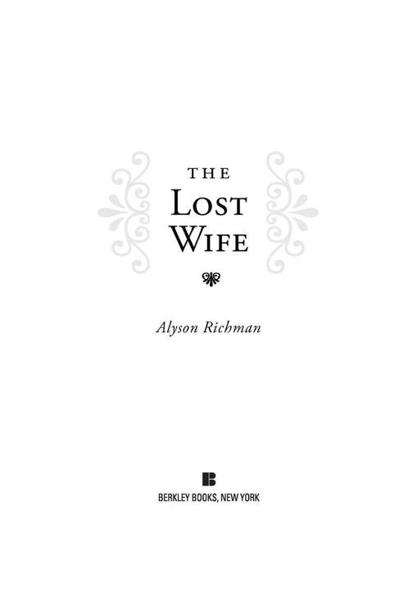 Table of Contents
Title Page
Copyright Page
Dedication
Acknowledgements
CHAPTER 1 - New York City 2000
CHAPTER 2 - New York City 2000
CHAPTER 3
CHAPTER 4
CHAPTER 5
CHAPTER 6
CHAPTER 7
CHAPTER 8
CHAPTER 9
CHAPTER 10
CHAPTER 11
CHAPTER 12
CHAPTER 13
CHAPTER 14
CHAPTER 15
CHAPTER 16
CHAPTER 17
CHAPTER 18
CHAPTER 19
CHAPTER 20
CHAPTER 21
CHAPTER 22
CHAPTER 23
CHAPTER 24
CHAPTER 25
CHAPTER 26
CHAPTER 27
CHAPTER 28
CHAPTER 29
CHAPTER 30
CHAPTER 31
CHAPTER 32
CHAPTER 33
CHAPTER 34
CHAPTER 35
CHAPTER 36
CHAPTER 37
CHAPTER 38
CHAPTER 39
CHAPTER 40
CHAPTER 41
CHAPTER 42
CHAPTER 43
CHAPTER 44
CHAPTER 45
CHAPTER 46
CHAPTER 47
CHAPTER 48
CHAPTER 49
CHAPTER 50
CHAPTER 51
CHAPTER 52
CHAPTER 53
CHAPTER 54
CHAPTER 55
CHAPTER 56
CHAPTER 57
CHAPTER 58
EPILOGUE
Author’s Note
THE LOST WIFE
Questions for Discussion
PRAISE FOR THE WORKS OF ALYSON RICHMAN
The Lost Wife
“Daringly constructed, this moving novel begins at the end, and then, in a fully realized circle through the most traumatic events of the twentieth century, returns you there in a way that makes your heart leap. Richman writes with the clarity and softness of freshly fallen snow.”
—Loring Mandel,
two-time Emmy Award–winning playwright of
Conspiracy
The Last Van Gogh
“
The Last Van Gogh
is a balanced symphony . . . Richman’s style is gentle and sober. With clear, undulating prose.... it is as evocative as one of Van Gogh’s paintings. Richman proves she can travel through time to re-create the past.”
—En Route Magazine
“
The Last Van Gogh
paints an intricate portrait of a woman’s life at the end of the nineteenth century . . . it is a powerful and poignant love story.”
—
Tulip
magazine
“[A] beautiful book.”
—Vriendin Magazine
Swedish Tango
“An engrossing examination of the prisons people create for themselves and the way they accustom themselves to suffering until liberation seems as painful as captivity. This is an ambitious exploration of political and personal struggles.”
—Publishers Weekly
“A heart-wrenching story of loss and love in the lives of people affected by war and political upheaval . . . [marked by] sharp resonance.”
—Library Journal
“Places an Ayn Rand lens on societal ethics against personal loyalty and safety . . . deep, thought-provoking, philosophical questions on the needs of an individual and a family against the demands of deadly leadership and a nation.”
—Midwest Book Review
The Mask Carver’s Son
“Recalls Arthur Golden’s
Memoirs of a Geisha
. . . Her sense of Japanese culture is subtle and nuanced.”
—
San Francisco Examiner & Chronicle
“This reverent, formal and ambitious first novel boasts a glossy surface and convincing period detail.”
—Publishers Weekly
“Richman has successfully drawn upon her historical research and her own experience . . . filled with historical detail and strong characterization.”
—Library Journal
“A meticulous profile of a man struggling against his native culture, his family, and his own sense of responsibility.”
—The New York Times Book Review
THE BERKLEY PUBLISHING GROUP
Published by the Penguin Group
Penguin Group (USA) Inc.
375 Hudson Street, New York, New York 10014, USA
Penguin Group (Canada), 90 Eglinton Avenue East, Suite 700, Toronto, Ontario M4P 2Y3, Canada
(a division of Pearson Penguin Canada Inc.)
Penguin Books Ltd., 80 Strand, London WC2R 0RL, England
Penguin Group Ireland, 25 St. Stephen’s Green, Dublin 2, Ireland (a division of Penguin Books Ltd.)
Penguin Group (Australia), 250 Camberwell Road, Camberwell, Victoria 3124, Australia
(a division of Pearson Australia Group Pty. Ltd.)
Penguin Books India Pvt. Ltd., 11 Community Centre, Panchsheel Park, New Delhi—110 017, India
Penguin Group (NZ), 67 Apollo Drive, Rosedale, Auckland, 0632, New Zealand
(a division of Pearson New Zealand Ltd.)
Penguin Books (South Africa) (Pty.) Ltd., 24 Sturdee Avenue, Rosebank, Johannesburg 2196,
South Africa
Penguin Books Ltd., Registered Offices: 80 Strand, London WC2R 0RL, England
This is a work of fiction. Names, characters, places, and incidents either are the product of the author’s
imagination or are used fictitiously, and any resemblance to actual persons, living or dead, business
establishments, events, or locales is entirely coincidental. The publisher does not have any control over
and does not assume any responsibility for author or third-party websites or their content.
Copyright © 2011 by Alyson Richman
All rights reserved.
No part of this book may be reproduced, scanned, or distributed in any printed or electronic form with-
out permission. Please do not participate in or encourage piracy of copyrighted materials in violation of
the author’s rights. Purchase only authorized editions.
BERKLEY
®
is a registered trademark of Penguin Group (USA) Inc.
The “B” design is a trademark of Penguin Group (USA) Inc.
PRINTING HISTORY
Berkley trade paperback edition: September 2011
Library of Congress Cataloging-in-Publication Data
Richman, Alyson.
p. cm.
ISBN : 978-1-101-55254-4
I. Title.
PS3568.I3447L67 2011
813’.54—dc22
2010054206

To Charlotte, Zachary, Stephen,
and my parents with love.
With special thanks to the Book Revue.
I am my beloved and my beloved is mine
SONG OF SOLOMON 6:3
CHAPTER 1
New York City
2000
He dressed deliberately for the occasion, his suit pressed and his shoes shined. While shaving, he turned each cheek carefully to the mirror to ensure he hadn’t missed a single whisker. Earlier that afternoon, he had even bought a lemon-scented pomade to smooth his few remaining curls.
He had only one grandson, one grandchild for that matter, and had been looking forward to this wedding for months now. And although he had met the bride only a few times, he liked her from the first. She was bright and charming, quick to laugh, and possessed a certain old-world elegance. He hadn’t realized what a rare quality that was until he sat there now staring at her, his grandson clasping her hand.
Even now, as he walked into the restaurant for the rehearsal dinner, he felt as though, seeing the young girl, he had been swept back into another time. He watched as some of the other guests unconsciously touched their throats because the girl’s neck, stretching out from her velvet dress, was so beautiful and long that she looked like she had been cut out from a Klimt painting. Her hair was swept up into a loose chignon, and two little jeweled butterflies with sparkling antennae rested right above her left ear, giving the appearance that these winged creatures had just landed on her red hair.
His grandson had inherited his dark, unruly curls. A study in contrast to his bride-to-be, he fidgeted nervously, while she seemed to glide into the room. He looked like he would be more comfortable with a book between his hands than holding a flute of champagne. But there was an ease that flowed between them, a balance that made them appear perfectly suited for each other. Both of them were smart, highly educated second-generation Americans. Their voices lacked even the faintest traces of the accents that had laced their grandparents’ English. The
New York Times
wedding announcement that Sunday morning would read:

Eleanor Tanz married Jason Baum last night at the Rainbow Room in Manhattan. The rabbi Stephen Schwartz officiated. The bride, 26, graduated from Amherst College and is currently employed in the decorative arts department of Christie’s, the auction house. The bride’s father, Dr. Jeremy Tanz, is an oncologist at Memorial Sloan-Kettering hospital in Manhattan. Her mother, Elisa Tanz, works as an occupational therapist with the New York City public schools. The groom, 28, a graduate of Brown University and Yale Law School, is currently an associate at Cahill Gordon & Reindel LLP. His father, Benjamin Baum, was until recently an attorney at Cravath, Swaine & Moore LLP in New York City. The groom’s mother, Rebekkah Baum, is a retired schoolteacher. The couple was introduced by mutual friends.