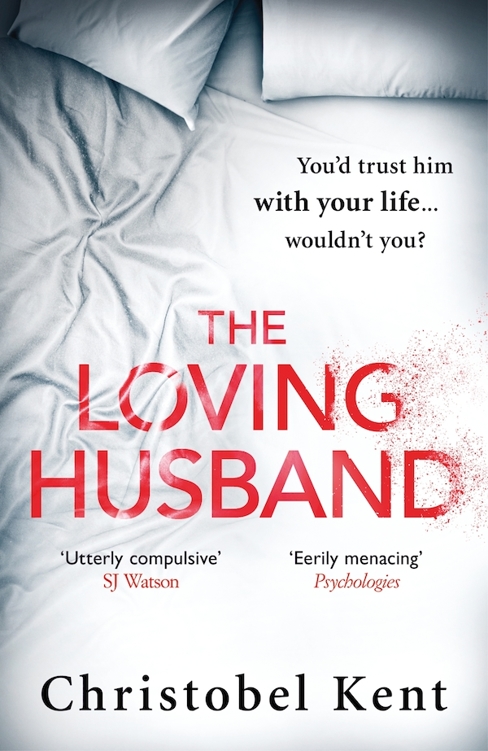 Christobel Kent was born in London and educated at Cambridge. She has lived variously in Essex, London and Italy. Her childhood included several years spent on a Thames sailing barge in Maldon, Essex with her father, stepmother, three siblings and four step-siblings. She now lives in both Cambridge and Florence with her husband and five children.

I’d like to thank the amazing team at Sphere: my brilliant editor Jade Chandler and the very patient Katherine Armstrong who took the reins while Jade was otherwise engaged with motherhood, Cath Burke for presiding over the transition and supporting me during it, Sphere’s tireless and perpetually enthusiastic publicity geniuses and the unflappable, ever-reassuring Thalia Proctor who always seems to go the extra mile. Without Richard Beswick of Little, Brown, I’d never have written at all, and my agent, Victoria Hobbs, deserves a medal for her cool head, insight and constancy. My own (living) husband Donald Robertson, doesn’t need me to say that none of it could happen if I didn’t have him.

He was in the room. She didn’t know how long she’d been asleep, but she’d been dreaming.

In the dark something padded between the furniture, and loose change clinked softly. The mattress gave beside her.

In the dream there’d been a wide littered beach and a man looking down at her, standing very close, the sun high behind him so she couldn’t see his face. The man reached into her breast pocket, she felt his fingers nosing, and he drew something out that glittered. Then the beach had gone and the space beyond the bed was all muffled blackness, no light came in from the landing. She might have been underground.

Cold crept under the duvet. She felt the furred brush of his leg against hers and obediently she turned away but his hand slid under her T-shirt; it rested on her hip and held her there on her side with her back to him. His hand was heavy.

Something blinked red off to the side, she couldn’t tell if it was inside her head or if she’d opened her eyes: the partial numerals of the radio alarm on his side of the bed. She knew if she turned her head they’d tell her the time but she didn’t move, her eyes closed, wanting the wide beach again, she wanted to know what it was the man had pulled from her pocket, but he was gone.

Behind her something else shifted, his body – heavy like his hand or was she dreaming that – bulky and hot, was pressed close and she heard his quick breath. He wasn’t going to sleep. And then his hand moved downwards, his palm was rough on the smooth of her backside. His fingers were between her legs and as they moved inside her she held her breath. It had been so long, for a second she didn’t know if she could still do it, but all the more reason. She knew if she stopped, if he stopped, after all this time, it would be the end of them, it would be disaster. And then he said something into the hair at the back of her neck, something unrecognisable.

She didn’t turn her head on the pillow and ask what he’d said so the words stayed mumbled, strange. But she let her breath go, and then his hands were on her shoulders, and he was inside her.

The cry woke her. If she hadn’t learned with Emme that however deeply unconscious and dreaming she was, that sound would reach through the layers of sleep and drag her out, her second child would have taught her, once and for all.
You wanted him
: how many mothers had had to tell themselves that? She had wanted him. Fran jumped up, to get to him before he woke them. Woke Nathan in bed beside her, Emme, in the next room. Silence.

She felt a thump in her chest as she remembered, a pulse of nervous triumph. Nathan, who by all rights should sleep till winter dawn, the sleep of the just and the satisfied. She could still feel a heavy warmth in the core muscles, a weight that wanted her pinned to the bed still.

Had the baby cried out in a dream, and gone back to sleep? She listened, wondering how it could still be so dark. And quiet. Her hand wandered over the duvet as she looked for the red-lit numerals of the alarm clock on his side. Except … she leaned low, following her searching hand. The duvet was flat and smooth, as tidily straight against the pillow as a hotel bed. Empty.

Nathan wasn’t there. And then she was rigid, alert.

The sunlit room existed in another world, where the air smelled of coffee and flowers, where the traffic hummed outside and each house down the street had a tree on the pavement, as far as the eye could see. Fran came out of the bathroom with the tiny plastic baton held out in both hands and for a second the sun was full in her eyes and dazzling her, until Nathan moved into the light, in front of her.

‘Are you all right?’

Her heart was beating so hard she thought it might jump right up her throat and out of her mouth before she got a chance to say the words. Gently he took the little piece of plastic from her; she didn’t know why she was so astonished, that it should have happened to
her
, but she was. Nathan didn’t look at the little plastic window, it was her face he studied, as if he was memorising it just as it was then, in that miraculous moment wiped smooth and new.

She hardly dared look back because it was all too quick, he couldn’t possibly be ready for this – but then she saw he was smiling. More than that: she saw everything she was feeling mirrored there in his face – the panic, the amazement, the thrill – as if he had absorbed it all.

‘I…’ she said. ‘We…’ And then his arms were around her, holding her tight against him, so tight, so warm. So safe.

He might be beside Ben’s cot, he might have woken before she did, her sleep might after all have been even deeper than usual, all things considered, and for a second a little happy world bloomed in the dark, the loving husband who’d looked down at her head on the pillow and thought, let her sleep.

Fran stood on stiff legs, the lazy warmth all gone to tension. It was so dark she felt unbalanced and she put out her hand to steady herself, moving hesitantly barefoot on the rug until she made the door and felt for the switch outside it. Light flooded the landing, lit the wide boards that tilted crazily the length of the old house, it exposed the rug worn thin, the dust in the corners. Silence.

Ben was asleep in the cot, an arm thrown back, chest rising and falling in the light from the door; she turned slowly in the dark room, checking its corners as if he might be standing there watching her, monitoring her panic. There was no one there.

Moving on down the corridor she set her face against the door jamb to Emme’s room. She saw the pictures on the wall above the bed, silver in the landing light, saw her daughter sleeping. Turning away, Fran whispered, ‘
Nathan
.’

But the labyrinth of rooms around her all sat quiet under the eaves, the twisting staircases, the odd angles, the low secret doors that had made him turn to her in front of the estate agent with his face all lit and say,
Don’t you love it
, as she tried to hide her discomfort.

‘Nathan?’ Her voice was high and thin, but not a whisper any more. More firmly. ‘Nathan.’ The children didn’t stir. She was on the stairs, quick, holding her breath, down.

The kitchen looked untidy under the bad lighting: they still hadn’t done anything to it; a year in, they’d done nothing.
Why not?
Jo would say if she saw it.
Isn’t that Nathan’s area of expertise?
Someone else’s grimy farmhouse kitchen: she hadn’t expected to find Nathan here, boiling a kettle, unable to sleep, it wasn’t that kind of a room, not the heart of the home. It hadn’t been that for the farmer, anyway, a man with oddly dyed hair and greasy clothes stiff with dirt. He might have been fifty, or seventy, Fran hadn’t been able to tell.
No wife
, he’d said from under a lowered brow, as if to explain the kitchen,
women don’t like the farming life
, although to Fran that had seemed the least of it.

There was a front door set at the centre of the house’s handsome façade, with a wide hall behind it and an ancient cavernous fireplace but they still hadn’t managed to get the door open in its Adam-pillared surround. Damp had swollen it: even the agent had muttered agreement. So they came in and out of the kitchen door instead, a mean little door that opened onto a yard with bolts top and bottom and a big rusty key.

She was standing behind it. She put a hand to the door’s high frosted pane, feeling how cold it was, the glass, and the kitchen itself. The room had no warm range to keep it cosy. Nathan had said
Maybe we can get one put in
, to convince her,
maybe, when we’ve got the cash
. His clouded eyes, making the calculation.

Under its ugly lighting the room seemed to crystallise around her. She tried to keep it neat, but things appeared. The mugs on their hooks, the tidy pile of newspapers and bills on the table and Emme’s drawings pinned to the dresser,
roses are red, violets are blue
because she hadn’t been able to wait till next Sunday, the day itself. Valentine’s. The dirty doormat under her bare feet. She looked down and saw the mat was rucked and askew; she saw bootprints, she registered wet mud on her skin. Leaning on the door she contemplated the dirty sole of her foot.

The bolts had not been shot. She put a hand to the key but she knew before she turned it that the door was unlocked. She didn’t want to open it, to step out into the wide dark that carried all the way to the horizon. Nathan’s mud-crusted boots stood beside the mat and she slid her feet into them, took a coat from the hooks at random, that was Nathan’s too, scratchy wool. She didn’t want to do the next thing.