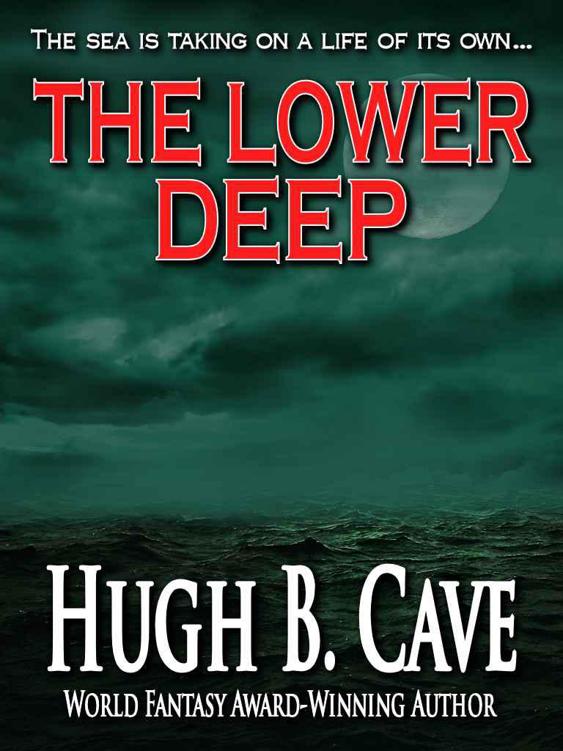 OTHER CROSSROAD PRESS BOOKS BY HUGH B. CAVE:

Serpents in the Sun

The Cross on the Drum

This one’s for Betsy

O
n the map that Dr. Stephen Spence carried in
the pocket of his yellow sport shirt, the road he traveled this afternoon was but a thin black line.

The map was a recent one, too. Full of apprehension about what he might be stumbling into, he had acquired it at the St. Joseph consulate in Miami just before leaving the States two days ago.

The road ran along the north coast of the Caribbean island of St. Joseph, from Cap Matelot west to the town of Dame Marie du Nord. Turned into a strip of red mud today by the driving rain that swept in off what the map referred to as the Ocean Atlantique, it had no right to be called a road at all, really. It was unpaved. After the Azagon turnoff it would end at Dame Marie, which was little more than a fishing village. Nothing but a fourwheel-drive vehicle could be expected to handle it in this kind of weather.

Steve frowned at his watch. In spite of the rain, he should reach the Azagon before dark if he didn't miss the turnoff. In the last twenty minutes, though, he had passed not a soul he could ask about it. Your St. Joseph country fellow didn't venture out of his thatch-roofed
caille
in this kind of weather.
Non, merci!

For that matter, there had been almost no huts for anyone to venture out of. The whole area seemed uninhabited. Not a jungle, of course. Not in this part of St. Joe. But a kind of wasteland, full of thorny bayahonde bushes and other scrub growth.

No doubt the road was one of the reasons, perhaps the principal one, why the Azagon had failed so quickly as a resort hotel. After paying top rates for a tropical beach and a touch of West Indian atmosphere at the end of such a nightmare journey, what tourist in his right mind would go home and recommend the place to his friends?

Suddenly the Jeep's headlights, turned on to penetrate the downpour, picked up a metallic glint from a sign on the right edge of the mud. AZAGON it said, with an arrow pointing down a side road even more improbable than the one that continued straight on to Dame Marie. Here, Steve thought with a shake of his head, Mr. New York might at least have paved his own private road to reassure his incoming guests, but apparently the good millionaire had decided not to disturb the primitive status quo. Ah well, it took all kinds.

His borrowed Jeep made the turn and defiantly growled on.

For another quarter mile the four-wheel-drive had its work cut out. Then, with a sound of surf causing his eardrums to ache, Steve found himself confronted by a structure so wildly unlikely in such primitive surroundings, he could only lean on the wheel and gape at it.

It appeared to be two stories tall—hard to be sure in the rain and semidarkness—and vaguely resembled the Palais National in the country's capital. Like the National Palace it was white, or had been, and had a broad front lawn, probably a sponge at the moment, and an elaborate entrance with wide steps.

Steve shook his head. What an assignment, after his plush hospital post in Florida! But, of course, he was probably the only medic old Tom Driscoll could have called on who knew St. Joe and could speak both the Creole of the peasants and the French of the elite. Perhaps even more important, he would not be intimidated by Dame Marie's voodoo as much as might someone facing that polytheistic religion for the first time.

"I'm certain the voodoo practitioners resent our being here," Driscoll had written with admirable frankness, "and I sense a nasty conflict heating up. So if you decide to come here, Steve, as I dearly hope you will, please don't expect everything at the Azagon to be sweetness and light."

With trepidation Steve sent the Jeep growling up the curving driveway. Overnight case in hand, he climbed the steps to the double front doors and
pressed the bell beside them. In a moment an overweight man in sandals, khaki pants, and a shabby green sport shirt opened one of the doors. "You must be Dr. Spence."

"I'm Paul Henninger. Manager here. How are you, Doctor?" The pudgy hand that came out felt clammy to Steve's firm fingers. "Welcome to the Azagon."

Henninger, Steve's mind echoed. Tom Driscoll had mentioned him in letters. He'd been with Tom from the beginning here, having worked before that at a hotel in St. Joe City. Tom thought highly of him, very highly indeed. But he was grossly overweight and looked sorely worried.

"I'll show you your quarters," the manager said. "Just let me get someone to carry your things."

"The rest got lost in St. Joe City. They've promised to fly it on to Cap Matelot when they find it." A shrug. "The friend in Le Cap who lent me the Jeep will get word to me when it arrives there."

For a hotel in such a place, even a resort hotel, the lobby was almost indecently large and far too expensively furnished, Steve decided. The staircase could have been half as wide and still have been adequate, though it was not carpeted—not anymore, at least. He was led along a second-floor corridor, past a number of closed doors, to a room at the front.

Some of his apprehension fled when he saw that his windows, two of them, afforded a fine view of the grounds, the driveway, and the sea. The room itself contained a bed, chairs, and dresser, and he wouldn't feel at all cooped up in it. The bed was a double, too, thank God. Taller than most men, he detested small beds.

"I hope it suits you, Doctor."

"Indeed it does, Mr. Henninger. Thanks."

"No doubt you'll want to unwind a bit before dinner after driving that road in weather like this. But would you like to say hello to Dr. Driscoll first?"

Tom Driscoll's room was at the far end of a downstairs corridor—a location he had chosen, Henninger explained as they approached it, because he was unwell and wished a measure of seclusion. "And because, with you coming to take over, he felt he wouldn't have too much to do for a time."

The door was shut. The manager knocked. "Dr. Spence is here, Dr. Driscoll!"

The answering voice seemed weary. "Come in, come in, please."

Inside, facing them as they entered, a white-haired man sat by a window, reading a letter while he ate from a tray laid across the flat arms of his chair. The antique silver letter opener on the tray was one Steve recognized—one given to Tom Driscoll years ago by a grateful patient. In his late seventies, Driscoll wore loose-fitting white trou
sers, a white shirt, a gray sweater. The meal consisted of a bowl of dry cornflakes and a glass of milk.

This was dinner for a doctor with from twenty to thirty patients in his care—most of them wealthy and demanding? But maybe the repast was only a snack. Don't jump to conclusions, Steve warned himself. That's an old failing of yours, and here it could be dangerous.

He paced forward, and Driscoll extended a thin hand over the tray to grope for his. "Steve! Thanks for coming! You've no idea how glad I am to see you!"

"Tired, that's all. And it doesn't help to be getting old."

With honest affection Steve studied the man. No way could he have refused Driscoll's plea for help. He owed this man his life. "Do you want to talk now or later, Tom?"

"Later, I think. But let me look at you." While looking, Driscoll slowly worked up a quivering smile, then reached for Steve's hand again and wrung it. "Yes, by God, it's good to see you! But you'll be tired. That miserable road. How'd you get here, anyway? Did Beliard bring you?"

"And you drove it here yourself?”

"My God. Not even knowing the road? And in weather like this?" The older man wagged his head in awe. "You haven't changed a bit in two years, have you? No, by God, you haven't. Still as
headstrong as when you worked with me in Fond des Pintards and had to attend that ghastly voodoo service when you should have known better."

Steve smiled. But you've changed, old friend, he thought sadly. You've aged twenty years in those two. It has to be the—how long?—thirteen months you've worked your butt off here, trying to make a success of this improbable place.

The Words He Wanted To Hear (The Billionaire's Baby) Book 1 by Helen Cooper
Becalmed by Kristine Kathryn Rusch
Irretrievable by Theodor Fontane
Thornbear (Book 1) by MIchael G. Manning
Diamond Dragon (Awakened Dragons Book 4) by Terry Bolryder
The Problem with Paddy (Shrew & Company) by Trent, Holley
Jane and the Genius of the Place: Being the Fourth Jane Austen Mystery by Stephanie Barron
The Great Cat Massacre by Gareth Rubin
Hooked for Life by Mary Beth Temple
Moonstone, Magic That Binds (Book 1) by Guy Antibes