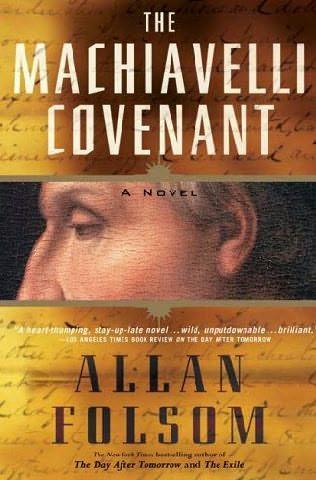 "More than a thriller,
The Machiavelli Covenant
is superb suspense, superbly written . . . Folsom's best so far."

author of
The Traitor

"A frenetic chase . . . Delivers on its promise to entertain readers looking for some fast-paced action."

"You thought that
The Manchurian Candidate
and
Seven Days in May
could
not
happen here? You thought that hostile takeovers only occurred on Wall Street and not in the White House? Welcome to the twenty-first century.
The Machiavelli Covenant
will wake you up pronto. If you thought
The Da Vinci Code
was gripping suspense, be prepared for a
real
roller-coaster ride. Folsom writes white-hot page-turners, guaranteed to singe your fingers and fry your hair."

"A rocket-paced tale of global maneuvering and betrayal."

"From the master of the genre comes the international thriller of the year. In one swift-moving scene after another,
The Machiavelli Covenant
sweeps you across the globe, drawing the strands of a spectacular conspiracy together, then twisting them tighter and tighter, and twisting you, too, with pulse-pounding suspense and a surprise on every page. If you like thrillers, don't miss it."

author of
Back Bay

"In Allan Folsom's
The Machiavelli Covenant
a coup d'état is alive and kicking, right here in the USA. Folsom grabbed me on the first page and did not let go. Talk about blood-chilling pulse-pounding reads. Folsom had my heart hammering in the high hundreds!"

of
Soldier of God
and winner of four

"The Exile
starts out like gangbusters and quickly engages the reader."

"Fast-paced, exciting adventure . . . With a sturdy hero and a despicably clever villain, the novel grabs readers from the opening scenes and rarely lets them loose. It does exactly what it set out to do: deliver breathless excitement."

"Hold on tight—from the first scene Folsom spins a tale of page-turning suspense."

"Folsom returns with another winner. . . . Unexpected twists and catastrophe on a global scale . . . Folsom should have another bestseller on his hands."

"More twists and turns than a strand of DNA."

"As thrilling and as action-packed as
The Day After Tomorrow."

"Folsom is an enthusiastic storyteller with a talent for vivid characterization on a big canvas."

The Day After Tomorrow

"A chilling jigsaw puzzle . . . This thriller doesn't leap out of the starting gate—it's catapulted!"

"A thriller that doesn't quit."

The Exile
The Machiavelli Covenant

Forge® is a registered trademark of Tom Doherty Associates, LLC.

For Karen and for Riley

The slow pound of Nicholas Marten's heart sounded like a drum buried somewhere inside him. His own breath, as he inhaled and exhaled, resonated as if it were a movie sound track. So did the sound of Caroline's labored breathing as she lay on the bed next to him.

For what seemed the tenth time in half that many minutes he looked at her. Her eyes were closed, as they had been, her hand resting gently in his. For all the life in it, it might as well have been a glove. Nothing more.

How long had he been in Washington? Two days? Three? Flown there from his home in Manchester, England, almost immediately after Caroline's call asking him to come. He'd known the minute he heard her voice something was terribly wrong. It had been filled with dread and fear and helplessness, and then she'd told him what it was: She had a very aggressive, untreatable staph infection and was expected to live only a few days more.

For all the horror and shock of it, there had been something more in her voice. Anger. Something had
been done to her, she told him, suddenly whispering as if she were afraid someone would overhear. No matter what the doctors said or would say, she was certain that the infection killing her had been caused by bacteria that had deliberately been given to her. It had been then, judging from sounds in the background, that someone had come into the room. Abruptly she'd finished with an urgent plea for him to come to Washington, then hung up.

He hadn't known what to think. All he knew was that she was terribly frightened and that her situation was made all the worse by the very recent deaths of her husband and twelve-year-old son in the crash of a private plane off the coast of California. Considering the physical and emotional toll the combination of these tragic things would have had on her, and with no other information, Marten found it impossible to know if there was any basis at all for her suspicion. Still, the reality was that she was desperately ill and wanted him to be with her. And from everything he'd heard in her voice he knew he'd better get there as quickly as he could.

And he had; within the day flying from Manchester in the north of England to London and then on to Washington, D.C., taking a taxi from Dulles International directly to the hospital, and later getting a room at a hotel nearby. That Caroline knew who he really was and the risk she dared subject him to by asking him to come back into the United States had not been brought up. It wasn't necessary. She would never have asked if something wasn't terribly wrong.

So he had come hurriedly back to the country he had fled four years earlier in fear for his life and that of his
sister. Come back—after so many years and the differing paths their lives had taken—because Caroline had been and was still the one true love of his life. He loved her more deeply than any woman he had ever known and in a way that was impossible for him to describe. He knew too that even though she was happily married and had been for a long time, in some unspoken, even profound way, she felt the same about him.

Marten looked up sharply as the room door was suddenly flung open. A heavyset nurse entered followed by two men in dark suits. The first was broad-shouldered, in his early forties, with dark curly hair. "You'll have to leave, sir, please," he said respectfully.

"The president is coming," the nurse said curtly, her manner abrupt and authoritative, as if she had suddenly become commander of the suits. A member of the Secret Service.

At the same instant Marten felt Caroline's hand tighten around his. He looked down and saw her eyes were open. They were wide and clear, and looked into his the way they had that first day they met, when they were both sixteen and in high school.

"I love you," she whispered.

"I love you too," he whispered back.

She looked at him for a half second more, then closed her eyes, and her hand relaxed.

"Please, sir, you have to leave, now," the first suit said. At that same moment a tall, slim, silver-haired man in a dark blue suit stepped through the doorway. There was no question who he was—John Henry Harris, president of the United States.

Marten looked at him directly. "Please," he said
softly, "give me a moment alone with her . . . . She's just"—the word caught in his throat—"died."

The men's gaze held for the briefest moment, "Of course," the president said, his words hushed and reverent. Then, motioning to his Secret Service protectors, he turned and left the room.

Thirty minutes later, head down against the world, barely aware of the direction he was going, Nicholas Marten walked the all but deserted Sunday-night streets of the city.