Read The Magic of Recluce Online 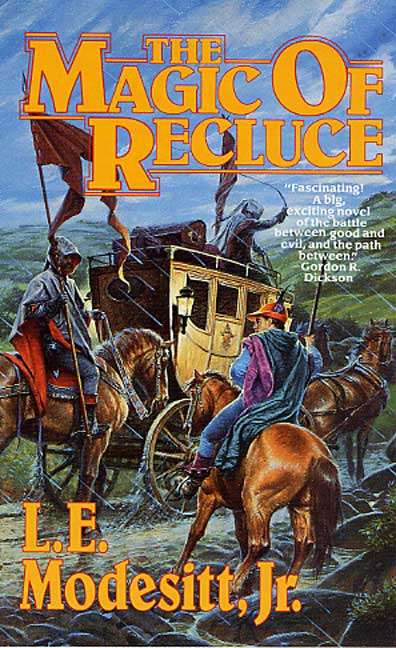 “You're sure?” asked Uncle Sardit, his mouth full.

“What choice is there? I either get plunked down on a boat to somewhere as an exile, knowing nothing, or I try to learn as much as I can before doing something that at least gives me some chance of making a decision.”

“I think that's the right choice for you,” said Aunt Elisabet, “but it's not quite that simple.”

After finishing my bread and cheese in the strained atmosphere of the house, I went back to my quarters over the shop and began to pack. Uncle Sardit said he would keep the chair and the few other pieces until I returned.

He didn't mention the fact that few dangergelders returned. Neither did I.

Dawn for a Distant Earth

Too belated an appreciation,
but real for all the delay
.

THE MAGIC OF RECLUCE
I

G
ROWING UP
, I always wondered why everything in Wandernaught seemed so dull. Not that I minded the perfectly baked bread routinely produced by my father or by Aunt Elisabet, and I certainly enjoyed the intricately carved toys and other gifts that Uncle Sardit miraculously presented on my birthday or on the High Holidays.

Perfection, especially for a youngster learning about it from cheerfully sober adults, has a price. Mine was boredom, scarcely novel for a young man in the middle of his second decade. But boredom leads to trouble, even when things are designed to be as perfect as possible. Of course, the perfection and striving for perfection that marked the island, though some would term Recluce a smallish continent, had a reason. A good reason, but one hardly acceptable to a restless young man.

“Perfection, Lerris,” my father repeated time after time, “is the price we pay for the good life. Perfection keeps destruction away and provides a safe harbor for the good.”

“But why? And how?” Those were always my questions.

Finally, shortly after I finished the minimum formal schooling, in my case at fifteen, my mother entered the discussion.

“Lerris, there are two fundamental forces in life, and in nature. Creation and destruction. Creation is order. We attempt to maintain itâ”

“You sound just like Magister Kerwinâ¦âOrder is all that keeps chaos at bayâ¦because evil and chaos are so closely linked, one should avoid all but the most necessary acts of destructionâ¦' I know perfection is important. I know it. I know it! And I
know
it! But why does it have to be so flaming
boring?
”

She shrugged. “Order is not boring. You are bored with order.” She looked at my father. “Since you are bored with us, and since you are not quite ready for the possibility of undertaking the dangergeld, how would you like to spend a year or so learning about woodworking with your Uncle Sardit?”

“Donara?” asked my father, obviously questioning my mother's volunteering of his sister's husband.

“Sardit and I have talked it over, Gunnar. He's willing to take on the challenge.”

“Challenge?” I blurted. “What challenge? I can learn anythingâ¦”

“For about the first three weeks,” my father commented.

“It's not as though you will ever be a master woodworker, Lerris,” added mother. “But the general skills and discipline will come in useful when you undertake your dangergeld.”

“Me? Why would I ever go tramping off through the wild lands?”

But the only thing that was assured then was that I would have the chance to learn how to craft some of the screens, tables, chairs, and cabinets that Uncle Sardit produced. Every once in a while, I knew, someone traveled from Candar or even from one of the trading cities of Austra to purchase one of his screens or inlaid tables.

Until I had a better idea of what I really wanted to do in life, woodworking was better than helping my father keep all the stonework spotless or mixing clays or tending the kiln fire for mother. Although the same traders who visited Sardit also visited my mother's shop, I did not have the touch for pottery. Besides, pots and vases bored me. So did the intricacies of glazes and finishes.

So, within days I had left the neat and rambling timbered and stone house where I had grown up, where I had looked out through the blue-tinted casement window in my bedroom on the herb garden for the last time. Then, I had walked nearly empty-handed the half-day to my uncle's where I was installed in the apprentice's quarters over the carpentry. Uncle Sardit's other apprentice, Koldar, had almost completed his term and was building his own house, with the help of an apprentice stonemason, a woman named Gorso. She was bigger than either of us, but she smiled a lot, and she and Koldar made a good pair. He was living in the unfinished house alone, but probably not for long. That meant that until another apprentice came along I had the privacy and the responsibility of the shop in evenings.

Still, it had been a small shock to realize that I would not be living in the guest room at Uncle Sardit's, but in the much smaller and sparsely-furnished apprentice's space. The only furniture was the bed, an old woven rug, and a single hanging lamp. The plain red-oak walls scarcely showed even hairline cracks where the boards joined. The polished floors, also red oak, displayed the same care and crafting.

“That's what you're here for, Lerris. When you learn how, you can make your own tables, benches, chairs, in the evenings. Have to fell your own wood and make arrangements with Halprin at the sawmill for the rough stock to replace what's been seasoned unless you want to try to cut and rough-cure the logs yourself. Don't recommend that.”

Sardit as a craft-master was a bit different than as an uncle.

I was going to learn about carpentry, and tools, and how to make screens and cabinets and tables, right? Not exactly. To begin with, it was just like the pottery shop, but worse. I'd heard about clays and consistencies and glazes and firing temperatures for years. I hadn't realized that woodworking was similarânot until Uncle Sardit reminded me forcefully.

“How are you going to use tools properly, boy, if you don't know anything about the woods you're working with?”

With that, he sat me down with his old apprentice notes on woods. Each day, either after work or before we opened the shop in the morning, I had to show him my own hand-copied notes on at least two kinds of trees, the recommended uses, curing times, and general observations on the best uses of the wood. Not only that, but each card went into a file box, the one thing he had let me make, with some advice from him, and I was expected to update the cards if I learned something of value in a day's work on a wood.

“What did you write down on the black oak? Here, let me see.” He scratched his head. “You spent all day helping me smooth that piece, and the wood told you nothing?”

Once in a while, I saw Koldar grinning sympathetically from whatever project he was handling. But we didn't talk much because Uncle Sardit kept me busy, and because Koldar mostly worked alone, just checking with Uncle Sardit from time to time.

After a while, Uncle Sardit even nodded once or twice when reviewing my cards. But the frowns and questions were always more frequent. And as soon as I thought I understood something well enough to avoid his questions, he would task me with learning some other obscure discipline of woodworking. If it weren't the trees, it was their bark. If it weren't their bark, it was the recommended cutting times and sawmill techniques. If it weren't one type of wood, it was what types you could match in inlays, what differences in grain widths meant. Some of it made sense, but a lot seemed designed to make woodworking as complicated as possible.

“But we don't even have any white magicians in Recluce.”

There wasn't much I could say to that. Practicing magicians, at least the white ones who used chaos, were strongly discouraged by the masters. And what the masters discouraged generally stayed discouraged, although there seemed to be only a few masters for all the towns in Recluce.

I guess my old teacher, Magister Kerwin, actually was a master, although we didn't usually think of magisters as masters. They were both part of the same order. Magisters were those who actually taught.

Soâ¦I kept studying woods, trees, and tools, and after nearly a year began to make a few simple items.

“Someone has to make them. And they should be made right. You can do it well enough to keep chaos at bay, and you can select from any of my designs or try one of your own. If you do your own, let's go over it together before you begin cutting.”

I did one of my ownâsimple, but with an octagonal shape.

“Simple, but nice, Lerris. You may actually have a future as a wood crafter.”

From breadboards, I went to other simple itemsâoutdoor benches for a cafÃ©, a set of plain bookcases for the school. Nothing with carving, although I had begun to do carving for my own furniture, and Uncle Sardit had even admitted that the wooden armchair I had built for my quarters would not have been out of place in most homes.

“Most homes. Not quite clean enough, and a few rough spots with the spoke-joining angles, but, on the whole, a credible effort.”

That was about the most I ever got in praise from Uncle Sardit.

But I was still bored, even as I continued to learn.

The Broom of the System by David Foster Wallace
City of Ghosts by Stacia Kane
A Splash of Christmas by Mary Manners
The Rake's Inherited Courtesan by Ann Lethbridge
Telón by Agatha Christie
tameallrom by Unknown
The Judas Strain by James Rollins
Mason (FALLEN CREST SERIES) by Tijan
Vultures at Twilight by Charles Atkins
The Nightmare Place by Mosby, Steve