The Magic Strings of Frankie Presto 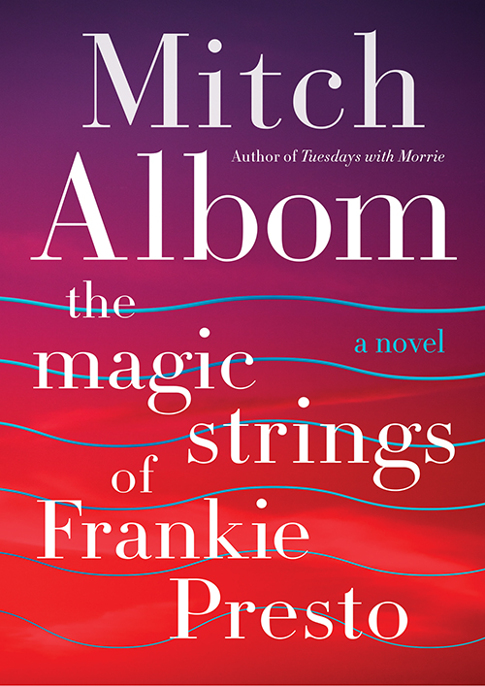 To my uncle Mike, the first of many

musicians in my life who made me say,

Here’s to all the boys who came along

And do you wonder where those boys have gone?

I HAVE COME TO CLAIM MY PRIZE.

He is there, inside the coffin. In truth, he is mine already. But a good musician holds respectfully until the final notes are played. This man’s melody is finished, but his mourners have come a great distance to add a few stanzas. A coda, of sorts.

Do I frighten you? I shouldn’t. I am not death. A grim reaper in a hood, reeking of decay? As your young people say—
please.

Nor am I the Great Judge whom you all fear at the end. Who am I to judge a life? I have been with the bad and the good. I hold no verdict on the wrongs this man committed. Nor do I measure his virtues.

I do know a great deal about him: the spells he wove with his guitar, the crowds he enthralled with that deep, breathy voice.

The lives he changed with his six blue strings.

Or I could rest.

I always make time to rest.

Do you think me coy? I am at times. I am also sweet and calming and dissonant and angry and difficult and simple, as soothing as poured sand, as piercing as a pinprick.

I am Music. And I am here for the soul of Frankie Presto. Not all of it. Just the rather large part he took from me when he came into this world. However well used, I am a loan, not a possession. You give me back upon departure.

I will gather up Frankie’s talent to spread on newborn souls. And I will do the same with yours one day. There is a reason you glance up when you first hear a melody, or tap your foot to the sound of a drum.

All humans are musical.

Why else would the Lord give you a beating heart?

Of course, some of you get more of me than others. Bach, Mozart, Jobim, Louis Armstrong, Eric Clapton, Philip Glass, Prince—to name but a few of your time. In each of their cases, I felt their tiny hands at birth, reaching out, grabbing me. I will share a secret: this is how talents are bestowed. Before newborns open their eyes, we circle them, appearing as brilliant colors, and when they clench their tiny hands for the first time, they are actually grabbing the colors they find most appealing. Those talents are with them for life. The lucky ones (well, in my opinion, the lucky ones) choose me. Music. From that point on, I live inside your every hum and whistle, every pluck of a string or plink of a piano key.

I cannot keep you alive. I lack such power.

But I
infuse
you.

And yes, I infused the man in the coffin, my mysterious and misunderstood Frankie Presto, whose recent death during a festival concert was witnessed by a sold-out crowd, his body lifting to the rafters before dropping to the stage, a lifeless shell.

It caused quite a stir. Even today, as they gather in this centuries-old basilica for his funeral, people are asking, “Who killed Frankie Presto?” because no one, they say, dies that way on his own.

Did you know his first name was actually Francisco? His managers tried to hide that. “Frankie,” they believed, was more palatable to American fans. The way young girls would scream it at his concerts—
“Frankie! I love you, Frankie!”—
I suppose they were right. Shorter names are more suited to hysteria. But you cannot change your past, no matter how you craft your future.

Francisco was his real name.

I was there the night it was bestowed.

That’s right. I know the unknown details of Frankie Presto’s birth, the ones historians and music critics—even Frankie himself—always labeled a mystery.

Does that surprise you? My willingness to begin with such a coveted story? Well. Why delay? I am not one of the “slower” talents, like Reason or Mathematics. I am Music. If I bless you singing, you can do so from your first attempt. Composing? My best phrases often lie in the opening notes. Mozart’s
Eine kleine Nachtmusik
?
Dum, da-dum, da-dum da-dum da-dum?
He burst out laughing when he played that on his fortepiano. It took less than a minute.

You want to know how Frankie Presto came into this world?

I will tell you.