Read The Maleficent Seven (From the World of Skulduggery Pleasant) Online

The Maleficent Seven (From the World of Skulduggery Pleasant) 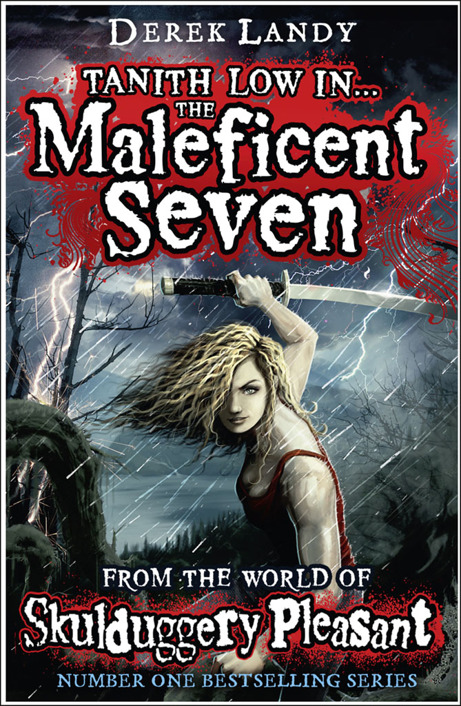 This book is dedicated to Brendan Bourke.

I am brash, arrogant, egotistical and incredibly narcissistic. Brendan was none of these things. Brendan was nice, and modest, and friendly, and he didn’t have one bitter bone in his body.

He was so completely weird.

He gave me my start as a writer and for that alone the world owes him an enormous debt of gratitude.

t had seemed like a good idea at the time, hiding out at her old place in London. Only an idiot would return to a known residence, she figured, and since she wasn’t an idiot, it would naturally follow that they’d never think to look for her there. The fact that they’d been lying in wait offended her more than anything else.

Tanith sprinted across the rooftop, boots splashing through a puddle as big as a lake, and leaped off the edge. The lane whipped beneath her and the night air stung her eyes. She collided with the building on the other side and clung there for a moment, then got her feet against the bricks and ran on, sideways. She jumped a string of windows one at a time, got round the corner and crouched there to catch her breath.

She hadn’t seen Sanguine escape, but he’d probably just slipped through the floor and burrowed away. Of course, there was the distinct possibility that they’d got to him before he could do that. If that had happened, he’d be dead by now. You didn’t arrest someone like Billy-Ray Sanguine, she knew, someone who could escape from any cell and slip out of any restraint. You killed him when you had the chance. Tanith hoped he wasn’t dead. He was useful to her.

She edged closer to the corner, had a peek round. The rooftops were clear. She’d lost them. Her hand, which had been gripping the hilt of her sword, relaxed, and she felt the reassuring weight of the blade return to its natural balance across her back. She straightened her legs and stood out from the wall, her blonde hair falling in front of her face as she looked at the cars passing below. The safest thing would be to get down to street level, hail a taxi or get the Tube. But in order to do that, she’d have to dump her sword. Her coat was still lying on the floor of her apartment. She loved that coat. When she wore it, it concealed the sword. She loved her coat, but she was
in
love with her sword. She could no more abandon it than any other woman could abandon her own arm.

She turned, walked up the wall, made sure no one was waiting for her, and climbed on to the roof. If poor old Billy-Ray was dead, she’d need to find someone to replace him, which wasn’t going to be easy. He was a fully functional sociopath, which made him useful in all sorts of fun ways. And she had a plan. She needed him for her plan to succeed. It was a good plan, too. Sneaky. She was proud of it, and looked forward to seeing how it would work out. She really hoped Sanguine wasn’t dead.

Tanith stopped moving. On the building opposite, a man stood. Dressed in grey, with a visored helmet and a scythe in his hands. He hadn’t seen her yet. She stepped backwards, started to turn, saw movement out of the corner of her eye.

Another Cleaver, leaping at her, the blade of his scythe darkened with fire to stop it glinting in the streetlights.

Tanith threw herself back, felt the scythe whisper past her throat. The Cleaver landed and came forward and she rolled and got up, her sword clearing its sheath. She met the next swipe and kicked, but he twisted his body out of the way as he spun the scythe so that the long handle cracked against her head. Cursing, Tanith stumbled, swung wildly with her sword to keep him back. The scythe handle hit her knee and she howled, and barely managed to fend off the blow that would have separated her pretty head from her pretty body.

The other Cleaver jumped across the chasm between the buildings, his legs tucked under him. Tanith wished she were an Elemental, so she could send a gust of wind to throw him back, let him fall to his death. But she wasn’t, and he landed, and now she had two Cleavers to deal with.

There was a time when they’d been on the same side, but that was back before the Remnant had squirmed its way into her soul. That dark little creature had taken her conscience, ripped it away from her, but in its place she had been given so many extraordinary gifts, as twisted as they were terrible. One of these gifts was a brand-new purpose, and this purpose meant that she could not allow these Cleavers to beat her here, tonight, on this rooftop. Darquesse depended on her.

They closed in. Tanith could see her own reflection in their visors. Her lips were black, and black veins riddled her face, the only outward signs that she had a Remnant inside her. She bared her teeth in a crazy-woman smile and said, “Come and have a go if you think you’re hard enough.”

They definitely thought they were hard enough, and they came in strong and fast. Tanith didn’t even have time to curse as she rolled and spun and defended. As her blade clashed with theirs, she started to wonder if she needed a new battle cry, something that wasn’t so goading.
I like your shoes
, perhaps.

She dipped to the side and ran her sword across the first Cleaver’s arm. She drew blood, but not a lot. Their uniforms were reinforced against attacks, both physical and magical. Unlike
her
outfit – boots and brown leather trousers and a nifty little waistcoat. She backed up, defending without thinking, letting her instincts control her arms, letting her legs go where they wanted. Her body was her survival tool. It would do its job with no help from her, allowing her mind to plan and strategise and scheme. Tonight, though, with the crescent moon somewhere behind her and light pollution blinding her to the stars above, the only thought that ricocheted around her head was,
if you don’t end this, you’re going to die
.

Tanith waited for an opening and dropped her sword as she lunged forward, through the first Cleaver’s guard. She hugged him, pressed her head into his shoulder so he couldn’t headbutt, and forced him back. He used her own momentum against her in order to hip-throw her to the roof’s surface, but she held on to him, landed on her feet and reversed the throw. His scythe clattered down as he spun over her hip, then it was his turn to throw her. Closer and closer they got to the edge, reversal after reversal, grappling all the while, trying to gain the upper hand as the edge grew nearer. Maybe the Cleaver expected her to throw him one final time, then immediately try to disentangle herself to stop him from pulling her over the side with him. Instead, she tightened her hold and kicked off, and they both went over.

The moment the Cleaver realised what was going on he let go of her, flailed about, tried to grab something where there was nothing to grab. Tanith was already bringing her knees up, pressing her feet against his belly. She released her hold and kicked herself away from him. She twisted, grabbed the edge of the roof and swung up, leaving him to fall. He didn’t scream on the way down, and she didn’t hear a splat or a crash, but she heard tyres squealing and horns blaring.

She cartwheeled to the side to avoid the second Cleaver’s attack. The curved blade came for her again and she slipped, recovered quickly, scrambled away, searching for her sword, her lovely sword. His boot smashed into her foot, taking both her legs from under her, and she hit the ground hard and gracelessly. She turned on to her back, froze as the Cleaver stood over her, scythe centimetres from her throat. Her chest rose and fell quickly. The Cleaver wasn’t even out of breath. Her body sucked the black veins down out of sight, sucked the blackness from her lips. She looked up at him, her face flushed but clear.

The Cleaver didn’t respond. She didn’t expect him to. He adjusted his grip on the scythe, preparing to ram it down. Her hands flew up, grabbed the staff just above the blade, held it at bay. He pushed down and she pushed back. Her muscles stood out, her biceps and triceps, tendons working like thin cables beneath the skin of her forearms. She had been strong when she’d been Tanith Low, Adept sorcerer and all-round good girl. Now that she was Tanith Low, Adept sorcerer and Remnant host, she was even stronger. But it didn’t seem to be doing her much good against the blade that was steadily dropping towards her carotid artery.

Her eyes focused on where the blade met the staff, at the tight screw that held the scythe together. With breath hissing through her clenched teeth, Tanith moved her left hand down slowly, until she could feel the screw beneath her palm. She concentrated on it, the same way she would with a door, feeling the tumblers within the lock, moving them, getting them where she wanted them to be. It was the same principle. She was opening something that had been locked to her. She felt the screw turning. She felt it pressing into her palm.

The screw came away and Tanith pulled the scythe apart, taking the blade into her left hand and letting the tip of the staff hit the roof’s surface by her right ear. She swiped, the blade cutting through the Cleaver’s leg, and he fell back as she got up. He reached for her, but she used the blade to bat his hand away. The tips of his fingers fell like confetti. With her next swing, she took his head off, and his body crumpled. She heard the sound his helmet made as it rolled away, and she looked over just as it disappeared off the edge of the building. A few seconds later she heard it smash through someone’s windscreen, and a horrified scream drifted up from the street.

She made sure no one else was about to jump out at her, then she dropped the scythe blade and walked over to her sword, returned it to its sheath. Then she went to look for Sanguine.