Read The Man Next Door Online 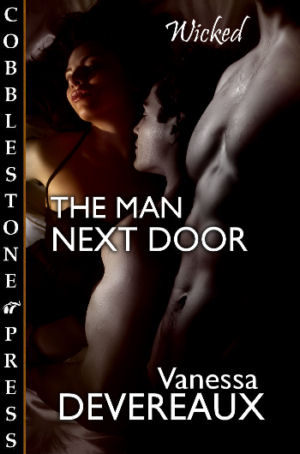 April Weston's been fascinated, almost obsessed
with her new neighbor, Andy. When he stops by one night, she learns
the attraction is mutual and things heat up.
When her boyfriend returns from a business trip, she knows she has
to say goodbye to sex with Andy. However, it seems some girls can
have their cake and eat it too when her boyfriend agrees to a ménage
with Andy. 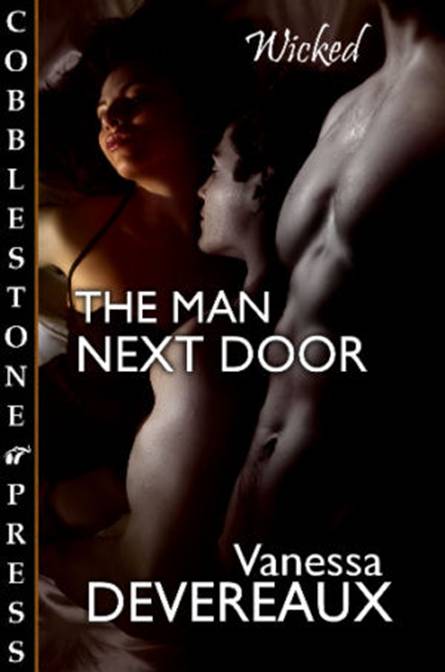 As always, for Jeff

“You’ve been staring out of that window for ten minutes. What’s so fascinating?”

I thought Jon was still asleep, or at least he had been when I’d sneaked out of bed, so his voice startled me.

“Just looking at the garden, thinking about what to plant this year.”

That had been a lie and that’s why I kept my back to Jon. Not that I do it very often, but he has the uncanny ability to know when someone’s lying.

I’d crept out of bed the minute I’d heard my next-door neighbor out in his garden. He’d moved in a month ago. I hadn’t met him yet, but I’d caught glimpses of him while he’d been in the back garden. Until he’d moved in, my neighbors had been couples with toddlers or cranky old ladies. The street’s latest addition looks thirty to thirty-five, tall, great body…in fact, everything about him was gorgeous and he’d become an obsession for me. Whenever I heard him outside, I’d rush to the window and enjoy the view.

It was only 8 a.m. on a Sunday morning. We were in the middle of a heat wave and it was already sweltering. My neighbor was working shirtless and only a pair of low-rise jeans adorned his gorgeous body. He stopped digging long enough to wipe the sweat from his forehead with the back of his hand. I licked my lips, imagining him wiping the sweat from his face after we’d had an afternoon of nonstop sex.

“So what are you thinking about planting?”

I jumped again. This time it wasn’t Jon’s voice that startled me, but his arms going around my waist. His already erect cock pressed into my bottom.

He kissed my neck and pulled me in closer to his body.

“I’ve still got to pack for my trip so I’ll need to head home soon,” he whispered in my ear. “How about a quickie before I go?”

I love quickies just as much as Jon, but today I wasn’t in the mood for sex. Well, I was, but just not with Jon. Today, the only person I wanted sex with was the guy next door.

“Don’t turn around,” he whispered.

It’s Jon’s favorite way to have a quick fuck, which worked in my favor today. It meant I’d still be able to watch my neighbor while we had sex.

He kissed my neck before lifting up my T-shirt over my head. I raised my arms before seeing it land by my left foot. Next, he tugged my panties from my butt and dragged them down my legs. I stepped out of them before they joined the T-shirt.

Jon kissed my neck again as he massaged my breasts. He fingered my tits until my nipples turned into hard little pebbles.

“Um, I’m going to miss touching you, smelling you while I’m gone.”

His hands slid down to my mound while he playfully bit into my neck. He glided one hand between my thighs. Jon inched his finger through my pubic hair and rested it on my clit.

I tried to play hard to get to add to his fun, but as he pinched me, sending zings of electricity through my belly, I had to give in and parted my legs.

One of his fingers slid into my pussy, taking me by surprise.

“Wow, you’re hot and ready this morning,” he mumbled in my ear.

He was right. Usually it took at least a couple of minutes of Jon stroking my clit to get me this slick and ready for him.

“Plants obviously turn you on. I’ll have to remember that.”

Jon licked my shoulder blade while thrusting his finger gently inside me. I spread my legs apart farther, raised my bottom up to him, leaned over slightly, and placed my hands on the windowsill, bracing for what was to come.

I was watching my neighbor wipe sweat off his chest as Jon’s cock slid into me. I almost moaned. I’d be thinking how big and long the guy next door’s cock was and how long it would take him to send me over the edge.

Jon placed both of his hands on my breasts as he started to thrust. I lifted my bottom up even higher as Jon slid his hands to my hips. He thrust harder, his thighs slapping into my butt.

I looked out the window as I gripped its sill tighter, hoping the guy hadn’t headed indoors. Nope, he was now sitting in a chair with his legs wide apart. I licked my lips, focusing on his crotch. There was quite the bulge there. I took a guess he was a big boy where it mattered the most. I pretended it was his cock and not Jon’s that was now deep inside me. I did moan this time.

Role-playing was all it took for me to climax. I’ve never used fantasy during sex so I was pleasantly surprised just how well it worked. It was a great orgasm. My pussy quivered. My legs shook and I held on to the sill as I sensed Jon was on the brink of ecstasy too. He held me close and kissed the back of my neck as he found his release.

“Jeez,” he said, sliding out of me. “Your pussy really gripped my cock today. That was great.”

I turned around and threw my arms around him.

In a way, my fantastic orgasm hadn’t been caused by Jon. I started to feel guilty about what I’d just done.

“I had a mind-blowing orgasm.”

“Um, so maybe we should do it this way all the time now.”

“I’d love to give you another one, but I gotta go. However, I have three surprises for you.”

He put his finger on my lips.

“I’ll phone you from New York and tell you about the first one.”

He kissed me good-bye.

“I’ll miss you too, but it’s only for a week. You be good, okay? Don’t work too hard in the garden.”

He walked over to the chair, grabbed his clothes, put them on, and walked out the door.

I should have followed him, waved good-bye to him when his car made its way down the road, but I didn’t.

I turned back to the window.

Maybe I’d head outside and do some gardening today.

Monday I had a bad day. First of all my car wouldn’t start, and then when I got to work my first client canceled our appointment. And it was sweltering hot again.

“Jon gone to New York this week?” asked one of my coworkers.

“Yep, he should be halfway there by now.”

“So what are you getting up to while he’s gone?”

“I thought I’d go home and do some gardening.”

I didn’t feel like eating when I got home so I headed upstairs, changed into my sundress, and was putting away my work clothes when the phone rang.

I walked over to it, plonked myself down on the bed, and picked it up.

“Is this the sexiest girl in the world?”

“I arrived safely in New York and I’ve just got to my hotel room so I thought I’d call you and tell you about your first surprise.”

“Open up the top drawer of your bedside table.”

I leaned over and did as he said.

“Underneath your assortment of your many naughty books, you’ll find a box. Take it out.”

Now I was intrigued. I lifted my books and, sure enough, there was a box stashed underneath. When had he placed it there? Must have been yesterday while I was in the shower.

“Okay, I’ll let you know how he compares.”

I put the phone in its cradle and switched over to speakerphone.

“And don’t worry because I already put the batteries in for you.”

I stood up and took off my underwear and threw it on the floor.

“I’ve just removed my panties and I’m back on the bed. I’m leaning back on my pillow,” I told Jon.

“No, I’m wearing one of my sundresses.”

“Hitch it up around your waist for me.”

I did that and glanced at myself in the mirror. This was such a turn-on. Only someone like Jon could think of a scenario like this.

“I’m going to stroke myself before I get to know Mr. Big.”

I stroked my clit a couple of times and then let my finger slide deep inside me.

“Okay, I’m nice and wet and Mr. Big is getting impatient so he wants to get to work.”

“Mr. Big is in my pussy and he feels so good. Oh, and I know why they call him big.”

“Jeez, this is more of a turn-on than I imagined. And does he feel better than me?”

Caminos cruzados by Ally Condie
The Familiars #4: Palace of Dreams by Adam Jay Epstein, Andrew Jacobson
Faith of My Fathers by John McCain
Lawfully Yours by Hoff, Stacy
Mila (Heartbreaker #3) by Evan Grace
Blowback by Stephanie Summers
Embraced By Passion by Diana DeRicci
Loving Her (Keeping Her) by Lucille, Kelly
OwnedbytheElf by Mina Carter
Fast and the Furriest by Celia Kyle