Read The Marine Next Door Online

The Marine Next Door 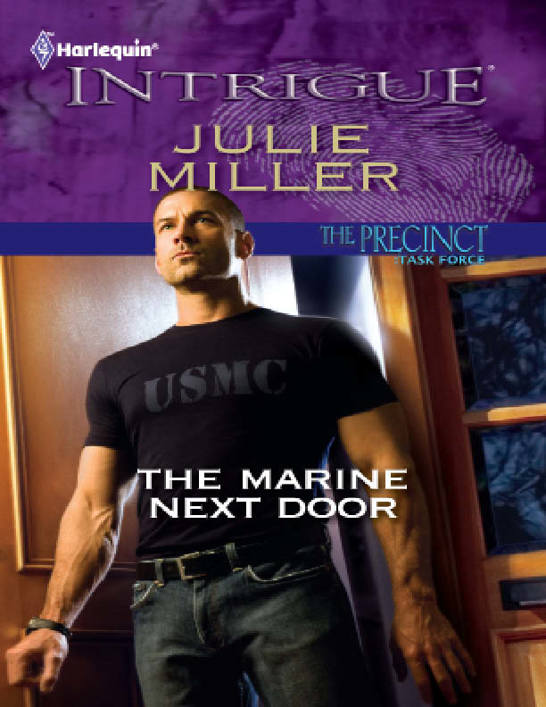 HE SAW THAT HER SAFETY WAS THREATENED

Maggie Wheeler never stopped looking over her shoulder. It was a habit she’d learned from being a cop…and from a devastating event in her past. So when John Murdock moved in next door, Maggie didn’t know what to make of the sexy marine. But once her son formed a bond with the mysterious stranger, Maggie knew that past might not remain hidden much longer….

SHE SAW HIM FOR THE HERO HE TRULY WAS

With his unwavering sense of duty, John would never let a call for help go unanswered. Especially from the beautiful wounded warrior who refused to give up her secrets. Although she likely knew more about who was after her than she’d ever let on, John vowed to protect those in need. Only then could he find peace, maybe even a door away.…

Captain John Murdock, USMC, Retired, with the strong hands and gruff sarcasm, was all male, all muscle and a mystery to her.

Maggie’s mind replayed every moment of that encounter with her new neighbor. She could still hear the deep voice demanding she do the right thing despite her fears—still feel the big hands that had accidentally warmed her and made her feel unexpectedly secure when he’d clasped her fingers. She could easily recall her gratitude that he’d spoken kindly to her chatty son even though she’d done nothing to encourage any type of conversation. John Murdock was bigger and stronger than her in every way.

She should be afraid of a man like that.

And yet she’d run to him for answers and assurances.

But blindly trusting a man like that was a mistake she couldn’t afford to repeat. Was she a fool to believe the military cut of his golden-brown hair and proud carriage of his shoulders meant he was a man who’d defend her?

The Marine
Next Door

Julie Miller attributes her passion for writing romance to all those fairy tales she read growing up, and to shyness. Encouragement from her family to write down all those feelings she couldn’t express became a love for the written word. She gets continued support from her fellow members of the Prairieland Romance Writers, where she serves as the resident “grammar goddess.” This award-winning author and teacher has published several paranormal romances. Inspired by the likes of Agatha Christie and Encyclopedia Brown, Ms. Miller believes the only thing better than a good mystery is a good romance.

Maggie Wheeler—
This KCPD desk sergeant and single mom is ready to make detective. Volunteering for the Rose Red Rapist Task Force is a smart career move. A rape survivor herself, she doesn’t need the threats and violence from her past, or a brooding new neighbor, to interfere just as she’s ready to finally move forward with her life.

John Murdock—
Just home from an eighteen-month stint in a war zone with his marine corps reserves unit. This once-gentle giant is struggling to adjust to normal life again. But there’s nothing normal about the threat stalking the leggy redhead in the apartment next to his. Can he tame his own demons long enough to save her and her young son?

Danny Wheeler—
Maggie’s ex has a prison record. And a temper.

Lawrence Boyle—
An old friend of Danny’s, who gives him a job as an exterminator.

Joe Standage—
The super at the Corsican Apartment Building where Maggie and John live.

Dean Murphy—
A firefighter at Station No. 23.

Miss Applebaum, Bernard Cutlass and the Wongs—
The mysterious neighbors on the seventh floor.

The Rose Red Rapist—
He hasn’t stalked a woman in Kansas City for years now. But he’s back.

“Maybe there won’t be a wedding!”

Hidden by the trash bins where he’d been working after regular customer hours, the man lingered in the shadows outside the Fairy Tale Bridal Shop near downtown Kansas City and watched as the back door swung open and the young couple stormed out into the parking lot.

An older woman, her hair gleaming like brass in the illumination of the trendy neighborhood’s wrought-iron lights, hurried after them. “You ungrateful little girl.”

“Please.” The shopkeeper following behind her tried to intervene but wasn’t assertive enough to be paid any heed. “You shouldn’t be making big decisions right now—”

“No, Mother.” The young woman whirled around and he caught his breath. She was so classically beautiful. So perfect. So like…
No, don’t go there.
“It’s young
woman.
Grown
woman. Not
little girl.
You can’t force this on me. It’s too big. Too much. I don’t want this.”

“You still want
me,
right?” The tall man in the tailored suit reached for her.

She shrugged off his touch with an unladylike grunt and no answer.

“Sweetheart.” The tall man smiled and clasped his hands around her shoulders, trying to soothe her temper. “Let’s go to our dinner reservation and use the time to cool off. It’s been a long day.”

The man in the shadows smiled beneath the mask he wore over his nose and mouth. That one had fire. An insidious awareness of her feminine strength licked through his veins and made him clench his fist around the bag he carried.

“Then let me drive you home. We’ll talk.”

“No!” The young beauty spun around and stamped her high heels toward the sidewalk that ran along the street. “I’ll catch a cab.”

When the young man and mousy shopkeeper moved to follow, the mother stopped them both. “Don’t bother. She’s been like this for weeks now. I’ll try to talk some sense into her when she gets home.”

Seriously? They were letting her march off by herself? Not that this was as dangerous a neighborhood as it had once been now that buildings were being renovated and new shops and young professionals were moving in. And the Shamrock Bar just a couple of blocks over, where a good cross-section of KCPD cops liked to hang out after hours, offered some degree of crime deterrence. Still, a woman alone, brave enough to face the city at night—too upset to be truly aware of her surroundings…

The man glanced up. The last vestiges of graying twilight were giving way to stars and a dim crescent moon. Night was falling, and it would be a dark one. Traffic was light between the race of rush hour and the incoming surge of the city’s nightlife.

The forgettable woman went back into her shop. With a silent nudge, the bossy mother and groom-to-be climbed into their car.

His pulse raced in anticipation at the opportunity at hand. The shop door locked. The car drove off. It would be so easy. It had been so long.

“Don’t.”
A voice of reason inside his head tried to warn him off the impulse heating his blood.
“You don’t need this anymore. You’re better than this.”

But he wanted. Hungered.

And she was all alone.

He dropped his bag to unzip his jacket and reach inside his pocket. Everything he needed was in his vehicle. It would be so easy.

“I told you to get rid of those things. Don’t think this way. Stop.”

But he’d done without for so long, he’d been so good. Still, the rage burned inside him every time he thought of…her.

And the hurt. The humiliation.

It wasn’t his fault. She couldn’t do this to him. Not again. He wouldn’t let her. He needed her to pay. He needed to take back all she’d stolen from him.

“It’s not the same. You’re confused.”

“Shut up,” he muttered, feeling his own hot breath moisten the fibers of the mask he wore.

He moved from the shadows to peek around the corner of the brick building. The street was practically empty. Storefronts were dark. The apartments above them were far removed from a world that was quickly shrinking to the quick, purposeful strides of the blonde woman and his own raging need.

Sliding his hand into his pocket, he turned off his phone, in case someone called and distracted him. In case someone thought they could track him down. This was just him and the woman now.

“Stop. She isn’t worth it,”
the voice argued.

But the white-hot haze inside his brain wasn’t listening. He ran to his vehicle and started the engine. He looked to the right, to the left, then pulled out of his parking space.

And even though the sun had set, he put on his dark glasses and followed her up the street.

I want to see you.

KCPD desk sergeant Maggie Wheeler had never seen an uglier flower. Not that there was a thing wrong with the cultivated shape and color of the pink spring tulip or the matching ribbon and tall bud vase.

But the florist’s card burned her fingertips, and everything the flower that had once been her favorite represented stirred like a swarm of angry bees in her stomach. She breathed a measured sigh between tight lips. Why couldn’t the past just stay buried in the past?

If the young man who’d delivered the gift hadn’t already disappeared, she’d have sent it back to be delivered to a hospital or nursing home where the tulip and baby’s breath could be appreciated. But because that option had left the building, she had no choice but to drop the whole thing into the trash at the end of the counter and empty out the shavings from the front desk pencil sharpener on top of it. She wadded up the card and tossed it in for good measure, too.

He's the One by Linda Lael Miller
Harmonizer's Evolution (Balancer's Soul cycle) by Lee Morgan
Living With Dogs by Dr Hugh Wirth
En compañía del sol by Jesús Sánchez Adalid
Life is Sweet by Elizabeth Bass
The Wondrous and the Wicked by Page Morgan
Playing with Power - Book 3: New Adult Office Romance by Huxley, Adele
Counting On It (Hearts for Ransom Book 1) by Evans, Georgia
I Married a Bear by A. T. Mitchell
Reunion by Sean Williams