Read The Mask of Destiny Online

The Mask of Destiny 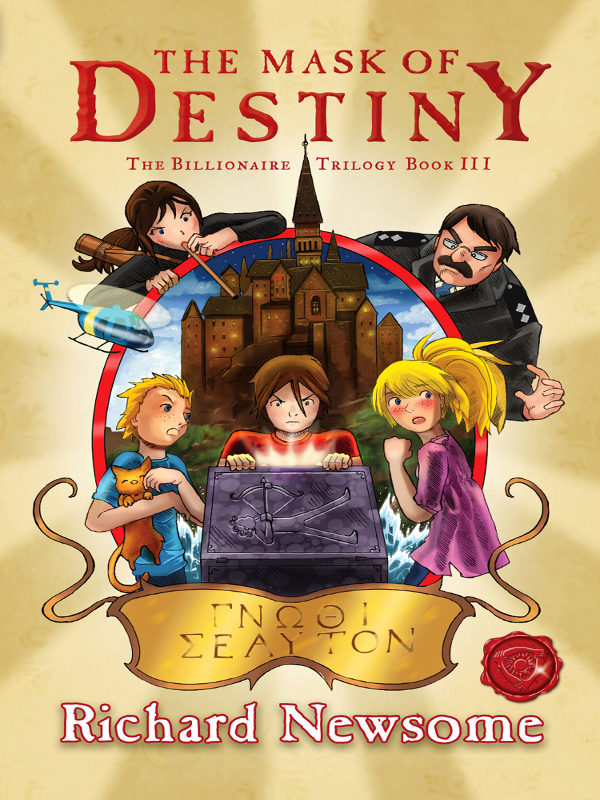 PRAISE FOR
THE BILLIONAIRE TRILOGY

âFilled with secret passageways and deadly booby
trapsâ¦you'll be on the edge of your seat!'
K-Zone

âA great whodunit which is almost as engrossing for
adults as it is for children.'
Bookseller & Publisher

âFrom Roman emperors to murderous cults, Indian
dynasties to secret fraternities, the adventures of
Gerald and his friends will keep young readers turning
the pages at lightning speed.'
Fiction Focus

BOOK I
The Billionaire's Curse

BOOK III
The Mask of Destiny

Richard Newsome lives in Brisbane with his family. He won the inaugural Text Prize for Young Adult and Children's Writing for
The Billionaire's Curse
, the first book in The Billionaire Trilogy.

BOOK III
of
THE BILLIONAIRE TRILOGY

For Robern and Mark, and Daphneâ
professional child wranglers

T
he man in the beige trousers checked his watch. It was still a few minutes before three o'clock. A bit early to go inâhe didn't want to look too keen. One more turn around the conservatory ought to do it. Constable Lethbridge of the London Metropolitan Police set off for another circuit of the building.

Kew Gardens on a summer's day: just about the perfect place to be in London. The sun's warmth lay across the parkland like a comfort blanket. The trees strained under their foliage. The lawns were lush carpet. There were even butterflies. And was that a wren warbling in the hedge as the constable lumbered past? Or perhaps a nightingale? Lethbridge didn't much care for songbirdsâhe was a racing-pigeon man. He could prattle for hours about the standard method of calculating velocities, or the complexities of the âslow clock' rule. A man and his pigeonsâwas there anything more natural?

Lethbridge struck up a tuneless whistle as he trudged around the large glass building. It was an odd place to meet somebody for the first time. He would have preferred the pub. He'd met the last five women from the matchmaking agency at the Dog and Partridge. They were all very nice. He always made a point of buying the first drink. Then he'd tell a few good racing-pigeon yarns. At that point the women always said they needed the ladies' room. And that would be the last he'd see of them.

Lethbridge rounded the rear of the conservatory and emitted a satisfied
hrumph
. âGood,' he thought. âNo back door.'

The call from the dating agency had come at the perfect time. Lethbridge had just come off the red-hot end of a roasting from his boss, Inspector Parrott. It had not been a good monthâfor either of them. The ongoing murder investigation involving the fugitive businessman Sir Mason Green was proving a nightmare. Lethbridge was looking forward to meeting someone who wasn't going to yell at himâat least not straightaway. Maybe even, dare he hope, she might be that someone special?

He reached the front of the Princess of Wales conservatory. The courtyard was crowded with young families, happy couples and a few pensioners holding hands. Lethbridge felt a sudden surge of confidenceâthis one was going to work out. He was sure of it.

And then he saw her.

They'd spoken briefly on the telephone to arrange the meeting. She had an intriguing voiceâfull-bodied, rounded vowels. She said she would wear a red coat with her hair down, so Lethbridge could recognise her.

âWon't it be hot in a coat?' Lethbridge had asked.

âBeing hot doesn't trouble me,' she had said. âDoes it trouble you?'

At that point, Lethbridge dropped the phone.

Even ignoring the coat, Lethbridge knew in an instant that the woman in the conservatory forecourt was the one. She stood out like a beacon.

Her skin was porcelain.

âYou must be David!' The woman was standing in front of him, a smile illuminating her face. âI'm Charlotte. So wonderful to meet you.' She leant on the
wonderful
like she was leaning on a car horn.

Lethbridge's palms broke into a sweat. He stared down at the woman's outstretched handâmanicured nails, doll-like skin. He didn't dare touch itâit would be like taking a freshly hatched pigeon by the neck.