Read The Master Of Strathburn Online 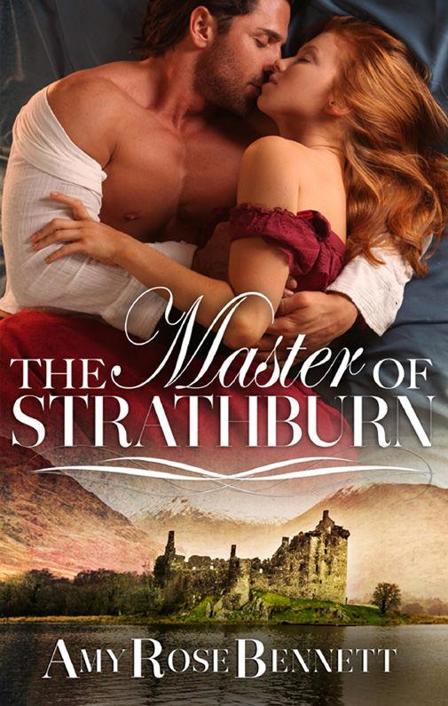 A sweeping, sexy Highland romance about a wanted Jacobite with a wounded soul, and a spirited Scottish lass on the run.

Robert Grant has returned home to Lochrose Castle in the Highlands to reconcile with his long-estranged father, the Earl of Strathburn. But there is a price on Robert’s head, and his avaricious younger half-brother, Simon, doesn’t want him reclaiming his birthright. And it’s not only Simon and the Redcoats that threaten to destroy Robert’s plans after a flame-haired complication of the feminine kind enters the scene…

Jessie Munroe is forced to flee Lochrose Castle after the dissolute Simon Grant tries to coerce her into becoming his mistress. After a fateful encounter with a mysterious and handsome hunter, Robert, in a remote Highland glen, she throws her lot in with the stranger—even though she suspects he is a fugitive. She soon realises that this man is dangerous in an entirely different way to Simon…

Despite their searing attraction, Robert and Jessie struggle to trust each other as they both seek a place to call home. The stakes are high and only one thing is certain: Simon Grant is in pursuit of them both…

Amy Rose Bennett has always wanted to be a writer for as long as she can remember. An avid reader with a particular love for historical romance, it seemed only natural to write stories in her favourite genre. She has a passion for creating emotion-packed—and sometimes a little racy—stories set in the Georgian and Regency periods. Of course, her strong-willed heroines and rakish heroes always find their happily ever after.

Amy is happily married to her own Alpha male hero, has two beautiful daughters, and a rather loopy Rhodesian Ridgeback. She has worked as a speech pathologist for many years, but is currently devoting her time to her one other true calling—writing romance.

As always, I must thank my absolutely wonderful family for supporting me every step of the way along my writing journey. You mean the world to me.

And a huge thank you must also go to my brilliant editor, Vicki Pickering. Your insight, support, and patience has definitely been appreciated.

To Richard, my hero. I love you always.

‘You’ve got a bloody nerve, Robert.’

‘Aye, I do.’ Robert Grant—the soon-to-be disinherited Master of Strathburn and Viscount Lochrose—squinted through the dark spots clustering his field of vision, trying in vain to focus on his sneering half-brother Simon. The bayonet wound across his shoulder-blade throbbed with such thought-stealing intensity, it was all he could do to stay seated upon his trembling, sweating horse. There was no way he would be able to dismount unassisted. He’d end up with his face firmly planted in the gravel of the forecourt. ‘But for the love of God, Simon …’ he continued, his voice no more than a hoarse rasp. ‘Just help me down. I’m wounded for Christ’s sake …’

He barely recalled the moment the English soldier’s blade had sliced across his back. The horror of everything else that had taken place only hours before on Drumossie Moor flooded his mind. Made the nausea rise in his gullet anew.

Simon snorted. ‘You must’ve had a blow to the head then, or else you would’ve remembered that Father forbade you to come back.’ He glanced past Robert, down the gravel drive toward Lochrose’s gates. ‘You’ve killed them all, haven’t you? It was a rout, just like Father said it would be, wasn’t it?’ His grey gaze, flint-hard with accusation and long-held resentment, returned to Robert. ‘He will never forgive you for this.’

No doubt. Twenty-six Clan Grant men dead. And I was the arrogant young cock who led them all out like lambs to the slaughter.

Robert swallowed down both the bile and bitter self-acrimony burning his throat. ‘I know,’ he croaked. ‘But please … I just need to hide until I can move on … tomorrow.’

Even though he had flagrantly disobeyed their father and had led out the clan at Culloden, Robert prayed that he would be shown a modicum of compassion. That the earl would at least grant his eldest son sanctuary for a single night before he fled Scotland to spend a life in exile in some far-flung place. Robert didn’t want to put his family at risk for harbouring a fugitive, but he just couldn’t go on any farther.

Simon smiled, the sentiment not quite reaching his eyes. ‘Of course, dear brother. I shall have a room prepared for you.’ He gripped Robert’s forearm with one hand at the same time he slapped the blood-soaked plaid sticking to his shoulder.

Bastard
. Agonising, white-hot pain instantly knifed through Robert. Even as black oblivion at last rose up to claim him, he didn’t fail to notice that Simon was still smiling.

The flickering of a torch in the near darkness, the insistent throb of his shoulder, and a cold stone floor beneath him were all that Robert could discern when consciousness eventually returned. All that and his deep and crushing despair.

Reluctantly cracking open an eye, he grimly noted there was to be no mercy for him after all, given that he was currently chained up like a dog in what used to be Lochrose’s dungeons, but was now the wine cellar. He had no idea how long he had been passed out down here, or whether it was day or night. But there was no doubt in his mind that Simon would have already sent for the English dragoons, or at the very least, the local Black Watch regiment by now. He expected it wouldn’t be long before he was carted off to be charged with treason.

Unless Father intervened …
But at this particular moment, that possibility seemed as unlikely as being granted salvation by the devil himself.

You don’t deserve anything, Robert Grant. You should have died on the field like the rest of your Jacobite brothers …

With what felt like a herculean effort, Robert pushed himself to a sitting position, the chain manacled to his left ankle rattling against the unforgiving flagstones, his shoulder screaming in protest. As dizziness and another surge of nausea took hold, he threw out his right arm to catch himself, striking his elbow. Glass clinked. Despite his dark mood, his mouth curved into a parody of a grin. Perhaps he could drink himself to death before the soldiers came. He reached for a bottle, pulled out the cork and took a slug.

He was perhaps halfway through the bottle when he heard the metallic scrape of a key turning in the lock of the cellar door. He looked upwards, eyes narrowed against the sudden flare of a lantern. In the doorway, at the top of stairs, loomed the silhouette of a large man.

MacTaggart
. Robert would know his voice anywhere. One of his father’s most trusted clansmen and a serving Black Watchman, Robert had known the man all his life. Indeed MacTaggart had taught him to wield his very first sword and shoot his first musket.

His guts tensed with wariness, Robert watched the burly Highlander descend the stone stairs. He was alone at least. No red-coated dragoons or other Watchmen appeared to be lurking in the shadows of the still open doorway. Robert took this as a slightly encouraging sign that he was not to be taken away.
Yet.

He raised the bottle of whisky in a mock toast to his former master-at-arms. ‘Care to join me in a wee dram, for old time’s sake?’

MacTaggart smiled crookedly. ‘Dinna mind if I do. Only a wee one mind as I’ll need a steady hand to fix yer shoulder.’ He placed the lantern on top of a nearby wine cask along with a large leather satchel. After rooting around in one of the pockets for a moment, he then turned back to Robert and grinned. In his hand was a wicked looking needle, long and curved. ‘Mrs MacMillan has lent me her best roast trussing hook. She says it’ll stitch yer shoulder up good as new.’

Robert shrugged and offered the whisky bottle to MacTaggart. ‘There’s no sense in mucking up Mrs MacMillan’s needle for this scratch. My head will sit just as well on the executioner’s block, nicely trussed shoulder or not.’

MacTaggart’s craggy brow descended into a deep frown. Squatting down, he gripped Robert’s good shoulder with one of his large, calloused hands and looked him in the eye. ‘Now we’ll have none of tha’ kind of talk, milord. Those bloody Redcoats willna get you. Yer father has instructed me to get ye away from here as fast as I can before dawn. And yer young squire, Tobias has offered to go wi’ ye. If I can get ye sewn up and out of here in the next hour, ye can both ride for the coast. There’ll be a fishing boat ye can slip onto, just past Nairn. Lord Strathburn says what ye do after that will be up to you. But there’s coin and new identity papers in that satchel there. How does Robert Burnley sound fer a new name?’

Robert was glad of the uncertain light cast by the lantern when tears suddenly rose to sting his eyes. Despite everything he’d done, his father had not completely forsaken him. It was more than he deserved.

He took another slug of whisky before pulling off his torn and bloody plaid and shirt to expose the long bayonet slash across the expanse of his back. ‘I prefer herringbone stitch if you don’t mind, MacTaggart.’

‘Are you sure you’re not a Jacobite, Mr Burnley? I hear there are quite a few skulking around the Caribbean.’

Stifling a curse, Robert forced himself to give his most charming, lopsided smile to the well-endowed and considerably inebriated Dowager Countess of Ogilvy, or Eliza, as she repeatedly insisted on being called
sotto voce
. He moved his forearm slightly so the Scottish noblewoman would refrain from resting her ample bosom upon it as she tended to do whenever she leaned forward to speak to him.

Although he had been a dinner guest of the Governor of Jamaica, George Haldane, on several occasions over the last few months, he had never had the misfortune of being seated beside such a trying guest. He generally ignored the attentions of wealthy, upper class women, preferring instead to engage a mistress whenever he felt the need for feminine company. Given the Caribbean could never be home to him, he had no desire to take a wife or become entangled with a needy aristocrat like the dowager countess. He preferred simple, uncomplicated relationships.

Keeping his expression carefully neutral—a skill he had perfected during his time as a former spy and mercenary for the French Army—he replied in a perfect imitation of an English gentleman’s drawl. ‘As romantic as it might sound having a Jacobite to dinner, Lady Ogilvy, I’m afraid I’m about as Scottish as the spotted dick and custard we just had for pudding.’

Lady Ogilvy giggled. Out of the corner of his eye, Robert noticed Governor Haldane turn his attention their way. He knew for a fact that the governor had served as a brigadier general in King George’s army and had been present at Culloden. Even though the Rebellion was ten years ago, Jacobites would definitely not be this man’s cup of tea.

Rainy City by Earl Emerson
No Dawn for Men by James Lepore
Masterpiece by Juliette Jones
Chocolate Macaroons and a Dead Groom (Poppy Peters Mysteries Book 2) by A. Gardner
A Thousand Tiny Failures : Memoirs of a Pickup Artist by Tony D
Foundation's Fear by Gregory Benford
Look to the Lady by Margery Allingham
The Secret of Saturn’s Rings by Donald A. Wollheim
Mortal Kombat by Jeff Rovin
Dangerous Games by Emery, Clayton, Milan, Victor