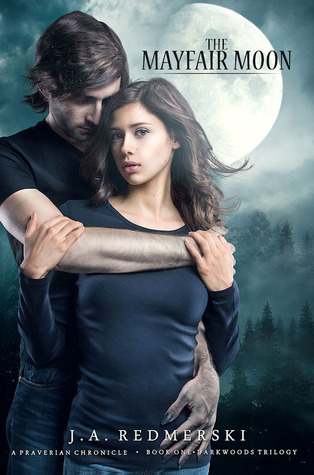 This book is a work of fiction. Any references to real people, historical events, or real locales are used fictitiously. Other names, characters, places and incidents are products of the author’s imagination, and any resemblance to actual events, locales, persons living or deceased, is entirely coincidental.

Copyright © 2011 by Jessica A. Redmerski

All rights reserved, including the right of reproduction in whole or in part and in any form.

For my mom, Kitty, for always being there for me even when I was at my worst and to my kids, Devan, Jerricah and Jonah for bringing out my best.

NO ONE USED THE F-word more
than my step-dad, Jeff. It pretty much made up his already limited vocabulary.

I stayed in my room around this time every night when he wasn’t out at the bar. A poor excuse for a man, yeah, but my mom, Rhonda, ‘loved’ him. Despite the drunken fit, it was a quiet night in our house. But don’t get the wrong idea: no one beat me and my life wasn’t all that bad, really. Jeff rarely bothered me or my sister, Alexandra, anymore. He backed off after Alex blacked his eye last year.

I’m not afraid of him. Who could be scared of a weasely-looking man with nine inch nose hairs and who could barely lift an economy-sized box of cat litter by himself? Okay, the nose hairs are pretty scary; I’ll give him that much.

I sat on the center of my bed with a book in my lap and a CD playing low beside me. Alex left earlier in the afternoon; she’d begged me to go with her to play pool, but I wasn’t much into pool. Besides, I knew why she
really
wanted me to go. She’d been trying to hook me up with Brent Haver-something. “But he’s hot,” she mentioned on more than one occasion. “And he’s a decent guy.” He probably
was
hot and a decent guy; she was rarely wrong about these kinds of things, but worse than usually being right, she was overprotective of her little sister and would rather pick out guys for me to date. Only problem was, I wasn’t into dating.

It was as simple as that.

I heard my mom shuffling around in her room across from mine. Hangers clanked violently in the closet. Drawers opened and slammed shut so hard the dresser banged against the wall. Her footsteps were heavy as she stomped back and forth, rattling the windows and the exposed light bulb just above me in the ceiling.

“What are you doing?” Jeff said.

“Why do you care?” my mom demanded. “Your girlfriend is getting warm in there on the coffee table.”

Mom always referred to Jeff’s beer as his ‘girlfriend’.

The only thing I could give him credit for was that it took more than sarcasm to get him to hit her. Not that that was saying much, but it was a small sense of relief for me. My mom, to be completely honest, couldn’t keep her opinions to herself; like right now, as she went on and on about his drunken ways. Sometimes I wondered if she was a masochist. I was used to the argument dragging out for at least an hour before Jeff’s inner-loser took over and he got physical. Some might say she deserved it (my stepbrother said that once—Alex blacked his eye too), but no woman deserves to be hit.

“Why don’t you back off,” Jeff said with a slur in his voice. “Crazy, nagging bi—”

“
Nag
?” My mom sounded shocked. I could picture her mouth open in total disbelief, her hands propped upon her bony hips. The more vulgar name he had started to call her she was so used to hearing. But ‘nag’, no way she was going to let him get away with
that
.

The rest of what she was saying, I ignored. It was always the same kind of argument with usually the same kind of outcome: drawn-out fighting, which ended in lengthy make-up sex that always forced me out of the house faster than the actual fight.

I hoisted my favorite canvas backpack on after tucking my book away inside it and then raised my bedroom window and slipped out into the humidity. It felt nicer than inside where the heat of the day grew and lingered. We lived in a tiny white house on twelve acres of land just outside of Athens, Georgia. From the road, the house looked like a dirty speck in an endless yellowing pasture. Not a single tree hovered nearby to help shade it from the blistering southern summers. I hated that house. It was Jeff’s house.

Our neighbors were spaced out here and there. Jack and Janice Bentley lived across the street—Janice had a cat-hoarding problem. Old Man Chester lived just around the curve past the proud and famous, Jacquelyn Morose, who had the pinkest house in Northeast Georgia. Though, the house didn’t make her famous; she was in a laundry detergent commercial like two hundred years ago and people still talk about it. Anyway, Old Man Chester was older than dirt too, and always wore the same coveralls. And then there was Mrs. Willis who lived next door. Unfortunately, she lived
directly
next door, as in about fifty feet away on the same acreage. We also shared the same mailbox post and driveway with her and our business was her business, too. One of
those
. There’s one in every neighborhood, isn’t there?

Like a vulture, Mrs. Willis watched me walk down the dirt-covered driveway and away from the rusted wire fence overrun by weeds. As if I couldn’t see her troll-like figure hovering at the kitchen window. Sometimes I felt like giving her the finger, but I was capable of restraint.

I did, however, super glue her mailbox shut when I was eleven. On the day she was supposed to get her Social Security check, at that. I could say that looking back on it now, I’m not proud of the childish deed. But then that would be a lie.

Neither my sister nor I were disrespectful girls. Despite Alex’s black eye record, she was the most caring and nonviolent person I knew. I learned a lot from her as we grew up (mom had too many unresolved issues to be much of a model herself). Alex taught me how to do a cartwheel, how to cook and even to drive a stick shift (the only thing that huge field around the house was good for). Admittedly, I wasn’t very good at any of them, but that’s beside the point.

An antique Ford drove past me, stirring up dust along the road. A gnarly hand poked out the window, waving at me as he went by. Old Man Chester. He waved at everybody; it was kind of customary in these parts. I waved back and kept on walking, slipping past a dozen eroded mailboxes and eventually over the creek bridge, which led to the park. The sun would be gone soon; the sky laced by thin, dark pink clouds just on the horizon. I could count four streaks of perfectly straight contrails left by planes, crisscrossing above me.

I sat in the park for an hour under an enormous tree; the one near the outskirts of the forest away from the playground and close to the public fishing pond. I loved it here. But I think a lot of people did. Hard to resist one of those mammoth trees with giant limbs that dip so low you can sleep on them. It was my thinking spot and where Alex could always find me.

“Adria,” she said walking toward me alongside the water, “Jeff went out, so let’s go home.”

She wore her trademark hip-hugger jeans, tank top and worn out black flip-flops.

I closed my copy of
Neverwhere
and left my index finger in-between its crumpled pages. The lamppost wasn’t putting off enough light anymore to read and the erratic cloud of bugs swarming around it was beginning to thicken.

“She was when I left to find you,” Alex said, sitting down next to me on the rain-deprived grass, “but was on her way out, too.”

“Thought you were playing pool tonight?”

Alex shook her head. “I was, but I thought you could use some company.”

She always thought of me first, always put me before just about anything. She was no eighteen-year-old saint; left me on my birthday last week to hang out with Zach Anthony, but she was the best sister anyone could ever have.

“Surprised you didn’t bring your
friend
along,” I said, smirking.

“What friend?” She paused. “Oh, you mean Brent—come on, Dria, he’s perfect for you. His dad owns a Honda dealership and his mom’s a doctor.”

I really had been referring to Zach Anthony—I admit; I was still a little bitter.

“I don’t care about that stuff.”

“I know, I know,” she said, “but he’s adorable—I swear he looks like Ian Somerhalder.”

I looked over at her with a roll of my eyes. “Oh please,” I said. “Why are you
really
trying to fix me up with this guy? Be honest.”

Alex grew quiet and frustrated all of a sudden. “I just don’t want you to make bad decisions,” she said simply.

Yeah, Alex always had that motherly way about her and sometimes she sounded like our actual mother
should
have. We grew up quicker than anyone we hung out with; honestly, sometimes we were more adult than some adults we knew. Mostly mom’s friends. No surprise there, really.

“You mean like the bad decisions mom makes?” I said. I had a feeling it was about something like this. She had always been more negatively affected by mom’s screw-ups than I was.

I regarded my sister. “I have to live and make my own choices, my own mistakes. You have to let me be me, even if I suck at it sometimes.”

“I know, you’re right,” she said, gazing out at the park.

“I love you for being you, though.” I smiled and she did too, just before she frogged me on the leg with her knuckle.

“Ouch!” I rubbed the spot hard with my palm.

“No cheesy love talk,” she laughed. “You know I hate it!”

She eased into a more serious mood then, impeccably.

“I need to tell you something,” she said. “I’ve been holding it in for weeks.”

Immediately, I had a bad feeling. I set the book on the grass next to me and turned to face her. I couldn’t actually say, “What is it?”
as the words were stuck in my throat.

I felt my heart sink. She just kept talking, but I could barely hear any word she said. Absently, I saw the way her dark hair flowed down around her oval-shaped face and how she kept the corners of her eyes soft as she tried to explain her reasoning.

“...Liz and Brandon said I could stay with them if I want. I’ll have to get a job and help keep the place clean, but I’m all for it...”

I didn’t want to hear this.

“...I’ll have my own space since they have the extra room above the garage. And you can come visit anytime you want. Once I get settled in you can come live with me too.”

Alex breathed deeply and let her head fall sympathetically to one side. “We can’t stay with mom forever; you know that.”

“So you’re just going to leave?” I stopped her before she answered. “Mom needs us here.”

“Adria,” she said, gazing at me with that just-listen-to-me-for-once look, “I don’t know about you, but I’m tired of being our mother’s mother. She won’t leave him. Isn’t that obvious already?”