Read The Maze: Three tales of the future Online

The Maze: Three tales of the future 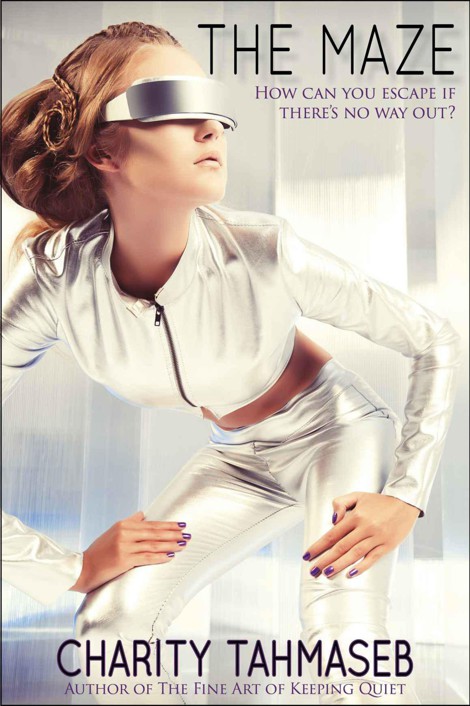 ON THE TWELFTH DAY, Cadet Eppie Langtry found the cracks in the wall.

She’d stopped her trek through the maze and leaned against its smooth surface. Exhaustion from the first six hours washed through her, the force of it pushing her into the unforgiving wall. After a few quick breaths, she wiped a hand across her eyes and rolled her shoulder. It was nothing more than a simple push to get going. But beneath her, something shifted.

Eppie sprang back, gulping cold air. She inched closer and probed the crevice with her fingers. The unrelenting and unchanging wall of the past twelve days slid against her skin. She nudged the wall with her shoulder, the way you might a best friend, as if she and this impenetrable white slab had anything in common. The crevice deepened.

Eppie glanced upward. The walls and ceiling were bare, but so bright that some days, she wanted to crouch into a ball, bury her head in her arms, and simply rock the twelve hour shift away.

She never did. The stories of those who had halted for too long kept her trudging forward through the maze. With her shoulder molding new shapes in the wall, Eppie latched onto the first glimmer of ...
something
. Like everyone else in her class, she’d spent hours pounding the surface, scratching the walls, kicking as hard as she could. Not even blood from torn fingernails was a match for the bright, white glare. Worse, after that first day, everyone’s boots went missing from their lockers, and they now navigated the icy maze in bare feet.

Her toes ached with the cold. Eppie sandwiched one foot on top of the other and inspected the dip in the wall her shoulder had made. She poked at the wall with her fingertips, and the pliant give became unrelenting again. It was as if the maze resented her earlier attempts of kicking and scratching.

Eppie blew out a breath. “I’d be resentful too,” she said, her words barely reaching her ears. It was as if the walls absorbed both the sound of her voice and what she had to say.

She tried her shoulder again, rolling it around, gentle, persistent, but giving it a bit of rhythm, like a dance routine. If the cadre were filming this—and no doubt they were—she must look ridiculous. A giggle escaped her lips, and Eppie slapped a hand across her mouth. She hadn’t laughed in how many days? Certainly not the last twelve.

Something solid and warm blocked her progress. Eppie halted, drinking in the first hint of heat in more than six hours. Was this the key, then? Movement? Friction? The wall beneath her still glowed white. It looked deceptively cold, but its warmth was delicious. She turned her face toward the wall, tongue flicking across her lips. What if she leaned forward? What if she let her mouth graze the surface? What then?

She was a mere breath away when the wall beneath her skin coughed.

Cadet Hank Su stomped through the corridor. No matter how hard he tried, the bright white swallowed the sound of his footfalls until all that remained were small, pathetic steps against the frigid floor. No matter how hard he screamed, the walls absorbed it. By dinner, his throat was so raw, even water scraped on the way down. He crashed from side to side. He kicked until they took away his boots. He gathered up all his strength and bolted down the corridor.

Gentle curves morphed into straight, hard surfaces—almost on a whim—and he slammed into the wall, this time not on purpose. Hank experimented with speed, sprints and slow jogs, but always moving forward. After that first day, when his best friend Ryan didn’t come back, Hank had known this was no ordinary training exercise. Every night, he confronted that empty bunk next to his. To stop seeing the image of the stripped mattress and empty footlocker, Hank bent his head forward and ran with all his strength, grateful for the crash at the end.

But today, day twelve, he walked the corridors, keeping his pace steady. When he stood still, the walls closed in. If he extended his arms, certainly he’d be able to touch both sides at once. Every time he tried? The walls exhaled. There was no other word for it. And they left him standing in the center of the hall, fingertips straining for the cold surface on either side of him.

An illusion. A trick. Something someone was recording. Would the cadre play it back, at the end of the exercise, so everyone could laugh at him? He shook his head, banishing that notion—and the thought that there was no end to this. That was why they punched the walls. That was why they kicked. Didn’t the cadre understand that? Or maybe they did, and that was the point.

Hank inched closer to one wall, letting his fingers trail along its surface. So smooth. So cold. An ache bloomed beneath his fingertips. He moved closer still, resting his forehead against the wall. The shock of cold almost made him jerk back. But as unrelenting as the wall was, it soothed his brow, made his throat feel less parched. Hank inhaled, held the recycled air in his lungs, then blew out a long breath and pitched forward.

There, on the wall—like the indentation on a pillow—was the impression of his forehead. With hands and fingers, he probed the dent. Nothing. In frustration, he leaned his head in the same spot, and the wall gave way again.

This time, Hank stood still. The corridor remained quiet. The lights blared down, like they always had. A dry, stale taste had invaded his mouth a few hours back. But this? This was new. This held hope. He rolled his head from side to side, the motion so gentle, his eyelids grew heavy. It was like an icy lullaby, and after six hours of running the maze, a relief.

The giggle stopped all his progress. Hank felt his eyes grow wide. Certainly his mouth hung open. A giggle. A girl’s giggle. He stepped back and surveyed the wall.

“Hello?” His voice sounded rough, so he coughed to clear it.

Nothing. Right. Walls didn’t giggle. That didn’t stop him from trying again. “Hello?”

“Is someone there?” The voice sounded light, but steady, and even better, real. Not some computer-simulated thing—and Hank knew all about those. This was a real girl.

Or, at least, Hank hoped she was. Instead of jumping back, he surged forward and cracked his head against the wall.

“Ow.” His voice sank into the walls around him, and it was almost like he hadn’t spoken at all.

“I head-butted the wall.”

“And use body parts that haven’t hit the wall, either.”

“Does your head still work?”

What kind of question was that? Hank stared at the wall so hard, the surface blurred red.

Oh. Of course. He was an idiot. “Let me try.” He eased forward, resting his head against the wall. From one side to the other, he rolled his head, the cold dulling the pain from the bruise.

His feet remained in the same spot, but the wall felt pliant under his forehead. He brought up a hand, testing the surface not with fingertips that had scratched, but with the heel of his hand. The sensation didn’t register at first, but a small circle beneath his palm radiated warmth.

A moment passed, a single heartbeat of hesitation. “Us?”

Was it? The reflex to jerk away nearly had him on the opposite side of the corridor. Instead, he stretched his fingers and pressed them against the wall. Warmth ran along his skin, pooled in his palm. The girl. It had to be, standing like he was, her hand against his.

The claxon alarm rang. The walls faded. The floor vanished beneath his feet. The plummet stole his breath, felt endless until the jolt of hitting the ground. He found himself in the assembly yard, like he had after every twelve-hour shift, along with all the others in his class. Lines formed for the dining hall. By rote, Hank joined one.

He didn’t answer. Instead, he traced patterns across his palm. If he closed his eyes, he could still feel her warmth. When he opened them, Hank realized one thing:

He didn’t even know her name.

Eppie scanned the dining facility, gaze darting, hopeful and quick. Too many times, she’d spotted someone, someone like her, someone with a secret. Her heart would speed up. She’d open her mouth to call out, raise a hand to wave, only to have that someone turn away.

Could she find the boy? If so, what then? How would that help them tomorrow, when they both went back inside the maze? She took her seat and pushed her dinner around her plate. Eat, she told herself. Build up your strength. Tonight’s stew was smooth, at least. And hot. The center of the spoonful burnt her tongue, and the heat of it seared the back of her throat.

Eppie clutched her water cup, brought the rim to her lips, and drowned the heat. When she set the cup down, the sharp gaze of a matron fell on her.

“What did you do?” her friend Chara asked.

Eppie shook her head. “I didn’t do anything.” Except make the maze move. Except talk to a boy, who was somewhere beyond the yellow dividing line that ran the entire length of the dining facility.

But what if the cadre had seen Eppie and the boy, heard them talk? Well, what of it? Eppie folded her arms across her chest. She raised her chin and stared back at the matron.

The woman glanced away.

Eppie put a finger to her lips. “Not here.”

She was scraping her plate clean when the bell sounded. Normally, they’d be released into the yard for a precious hour of social interaction, but not at this point in their training, not while they were all navigating the maze. Instead, they walked the lines to their separate dormitories, were pushed through showers, and watched the lights flicker above their bunks.

“Actually, it comes at the same time every day,” Chara whispered.

Eppie giggled. The feel of it in her throat made her think of dancing with the maze. The boy. His warmth.

“There’s more to the maze,” she whispered to Chara.

The matron’s footfalls sounded in the aisle between the two rows of beds.

The footsteps grew louder, then slowed, then stopped—right beside Eppie’s bunk.