The McGillicuddy Book of Personal Records 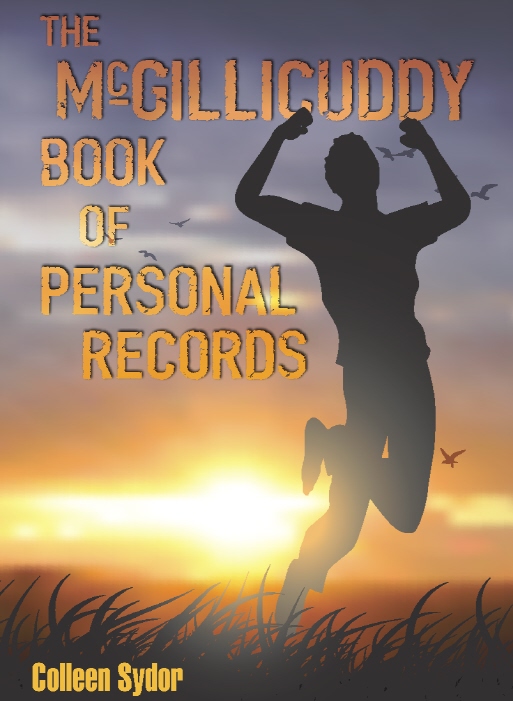 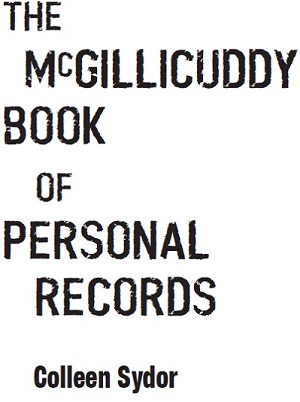 All rights reserved. No part of this publication may be reproduced, stored in a retrieval system or transmitted, in any form or by any means (electronic, mechanical, photocopying, recording or otherwise), without the prior written permission of Red Deer Press or, in case of photocopying or other reprographic copying, a licence from Access Copyright (Canadian Copyright Licensing Agency), 1 Yonge Street, Suite 1900, Toronto, ON M5E 1E5, fax (416) 868-1621.
By purchasing this e-book you have been granted the non-exclusive, non-transferable right to access and read the text of this e-book on screen. No part of this text may be reproduced, transmitted, downloaded, decompiled, reverse engineered, or stored in or introduced into any unauthorized information storage and retrieval system, in any form or by any means, whether electronic or mechanical, now known or hereinafter invented, without the express written permission of Red Deer Press.

Do your work with mastery.

Like the moon, come out from behind the clouds!

One must never let the fire go out in one's soul, but keep it burning.

Hide it under a bushel?

No! I'm gonna let it shine.

A million thanks, guys!

For Sue, who knew

Any minute, any day, some players may break a long-standing record. That's one of the fascinations about the game, the unexpected surprises.
Connie Mack, aka Cornelius McGillicuddy

Hotshots, every last one of 'em. He'd seen it all beforeâ
kathunk, kathunk
âthose dorks on televisionâ
kathunk
âdoing any number of humiliating things just to get their names into the
World Book of Records
. Lee switched the basketball to his left hand and continued bouncing without missing a beatâ
kathunk
. The stunts involving nasal passages were the worstâguys who'd swallow one end of a long strand of spaghetti, for example, then hork hard enough to make it come shooting out a nostrilâ
kathunk, kathunk
âor snort chocolate milk up their noses, and squirt it out their tear ducts â¦

Naa â¦ Lee McGillicuddy liked to think he had a little more class than that. Besides, he'd tried the chocolate milk thing once and it'd only made him throw up. Just as well. What was the point of repeating what someone else had already done? And he didn't need his name officially written in some old book, as if the record didn't count unless the whole world was watching. No, it was enough for Lee just to make and break his own records. Least, that's what he told himself.

Lee 'bout jumped out of his jersey when a voice broke into his thoughts.

Rhonda interrupted him like she always did. “I've told you a
zillion
times not to call me that,” she said. “My name's Ron.”

“Yeah, and mine's Lee, but that doesn't stop you from calling me Daddy. And I've told
you
a zillion and
ten
times.”

He'd earned the nickname at school after taking on a growth spurt that left him a good six inches taller than the tallest kid in the class. Daddy. Short for Daddy Long Legs. And he definitely had themâlong legs, that is. Lee had become used to the name ages ago, but he knew he'd never get used to Rhonda calling him that. Not only was Rhonda three years younger than Lee, but she was as short for her age as Lee was tall. It was just a little too creepy to have a pygmy ten-year-old following you around all the time calling you Daddy.

Lee knew her fingertips were fairly itching to grab the ball and make him chase her. He backed away a step or two. “You can't quit a team you've never been on,” said Lee. “You know very well I got cut the first day.”

It hadn't been his idea, by the wayâtrying out for the basketball team. He'd given in to everyone's hounding just to get them off his back. But he knew it would be a disaster. Just because a guy towers above everyone else on the court doesn't mean he'll be a natural at ker-plunking or splunking or whatever the heck they called it.
Slam-dunking
, that was it. And he'd tried telling them as much. But no. They'd forced him to prove his klutziness to an entire gym full of people instead.
Kathunk kathunk kathunk.

“So if you're not on the team, then why ya practicing?”

“No, I'm n â¦” Lee stopped himself just in time to save his dignity. Rhonda waited for him to finish the sentence, then became impatient.

“What
are
you doing, then?”

He started to answer, then stopped again. Rhonda had a way of making him forget that he didn't owe her any explanations. Why was he always baring his soul to this kid?

“Oh, I get it,” said Rhonda, giving her nose an upward swipe with the heel of her hand. The habit had left a permanent pale crease above the tip of her nose. Lee liked to tease her about it when he was in a generous mood. Rhonda spoke up. “You're breaking another one of your dumb old records, aren't ya?”

Lee didn't answer. She was ruining his focus. Like she always did. And how the heck had she found him here, anyhow? He'd calculated that this abandoned garage lot was far enough away from school to avoid curious, smart-alecky onlookers. But that was Rhonda all overââshe seemed to be able to sniff him out like a hound dog.

Lee continued to bounce the ball with a look of severe concentration so maybe she'd get the message and vamoose. No such luck.

“Going for the full twelve hours this time?”

Some records required only skill (or stupidity), and could be over in a few seconds. It didn't take long to swallow fifty live goldfish, for example. But others required time and mega patience, and those were his specialties. Most of Lee's records were limited to twelve hours, max. It was the longest stretch of time he could stay out of the house and not get hauled back home for dinner, or bed, or something equally lame. If he started at nine in the morning, and told his mother he was staying at a friend's place for lunch and supper, he could still make it home by nine in the eveningâhis curfew time. Last time he'd done the basketball challenge, he'd only lasted ten hours and thirteen minutes. He'd tried peeing while bouncing the ball at the same time, but it had ended badly, and his mother gave him heck for dribbling in the
bathroom
, of all places. (The
basketball
kind of dribbling, you understand.) This time he was prepared. He hadn't had anything to drink since yesterday afternoon and, if worse came to worst, there was always the bushes.

He knew she meant it. “I'm trying to break ten hours, thirteen,” he muttered. Then he looked her straight in the eye. “Bye
bye
, now!”

Rhonda ignored him. She stopped watching the basketball and turned her attention to a tattoo on her forearmâfake, of course. It was half peeled off so you couldn't even tell what it was anymore. The tattoo was one of six applied four weeks ago.

Made Lee wonder how often she bathed â¦

Rhonda “Ron” Ronaldson of Winnipeg, Manitoba, sets an
ALL-TIME PERSONAL RECORD
for the longest stretch of consecutive days without taking a bathâtwelve weeks, six days, ten hours, and counting. Miss Ronaldson is also trying for a simultaneous record of how much mud one person can pack under her fingernails at one time â¦

Lee could suddenly feel Rhonda's eyes boring into him. “Why are you smirking to yourself?” she said, “What goes on in that pea-brain of yours?” Lee refused to reply, so she came up with a question he was more likely to answer. “Staying at Gertie's or Aggie's tonight?” she asked, picking at the last letter of what used to spell
Rebel
across her bicep (if you could call it that).

Serial Killer Investigations by Colin Wilson
The Invention of News: How the World Came to Know About Itself by Andrew Pettegree
The Dead Survive by Lori Whitwam
Maxed Out by Daphne Greer
Task Force Black by Mark Urban
Time of Death by James Craig
The Casual Vacancy by J. K. Rowling
G-157 by K.M. Malloy
one hot summer by carolina garcia aguilera
The War of the World: History's Age of Hatred by Niall Ferguson