Read The Member of the Wedding Online

The Member of the Wedding 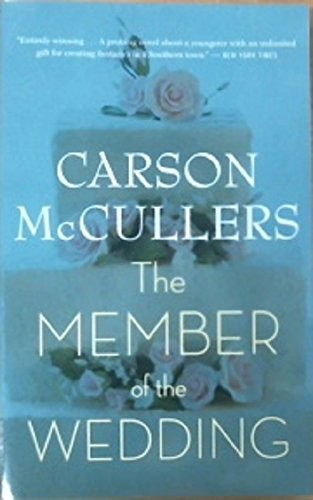 The Member of the Wedding
Carson McCullers

The Member of the Wedding

"Rarely has emotional turbulence been so delicately conveyed.
Carson McCullers's language has the freshness, quaintness, and
gentleness of a sensitive child." —
New York Times

"There is an almost perfect harmony between the theme of this
book and the prose in which it is expressed, for the prose is lyrical
and sensitive and always fresh." —
Chicago Tribune

"[
The Member of the Wedding
] is poignant and arresting, amazingly
perceptive and exquisitely wrought." —
Boston Herald

"McCullers's descriptions are vivid and original, and her narration
is startling and straightforward. It is a 'can't-lay-it-down'
book." —
Columbus Dispatch

"
The Member of the Wedding
is a fine book, urging thought upon
us and germinating recollections and beliefs. The writing is beautifully
adapted to its purpose." —
Commonweal

"A parable on the life of the writer in the South and of the alienation
that he feels." —
New Republic

"[McCullers] proves herself a consistently forceful writer. This
probing into a child's deepest thoughts produces a story that is as
unforgettable as it is unique." —
Chicago Daily News

"[McCullers] has never done anything better than this."

"A superb understanding of the bewilderments of adolescents ...
[McCullers] knows better than almost any author how to catch
the dream-like quality that is at the root of most people's private
existence." —
Charlotte Observer

"Reading
The Member of the Wedding
is like living a day in some
other person's life. It is honest, true, and real, more wonderful
than any kind of fiction." —
Hartford Courant

It happened that green and crazy summer when Frankie was twelve years old. This was the summer when for a long time she had not been a member. She belonged to no club and was a member of nothing in the world. Frankie had become an unjoined person who hung around in doorways, and she was afraid. In June the trees were bright dizzy green, but later the leaves darkened, and the town turned black and shrunken under the glare of the sun. At first Frankie walked around doing one thing and another. The sidewalks of the town were gray in the early morning and at night, but the noon sun put a glaze on them, so that the cement burned and glittered like glass. The sidewalks finally became too hot for Frankie's feet, and also she got herself in trouble. She was in so much secret trouble that she thought it was better to stay at home—and at home there was only Berenice Sadie Brown and John Henry West. The three of them sat at the kitchen table, saying the same things over and over, so that by August the words began to rhyme with each other and sound strange. The world seemed to die each afternoon and nothing moved any longer. At last the summer was like a green sick dream, or like a silent crazy jungle under glass. And then, on the last Friday of August, all this was changed: it was so sudden that Frankie puzzled the whole blank afternoon, and still she did not understand.

"It is so very queer," she said. "The way it all just happened."

"I have never been so puzzled."

"But puzzled about what?"

And Berenice remarked: "I believe the sun has fried your brains."

"Me too," John Henry whispered.

Frankie herself almost admitted maybe so. It was four o'clock in the afternoon and the kitchen was square and gray and quiet. Frankie sat at the table with her eyes half closed, and she thought about a wedding. She saw a silent church, a strange snow slanting down against the colored windows. The groom in this wedding was her brother, and there was a brightness where his face should be. The bride was there in a long white train, and the bride also was faceless. There was something about this wedding that gave Frankie a feeling she could not name.

"Look here at me," said Berenice. "You jealous?"

"Jealous because your brother going to be married?"

"No," said Frankie. "I just never saw any two people like them. When they walked in the house today it was so queer."

"You jealous," said Berenice. "Go and behold yourself in the mirror. I can see from the color in your eye."

There was a watery kitchen mirror hanging above the sink. Frankie looked, but her eyes were gray as they always were. This summer she was grown so tall that she was almost a big freak, and her shoulders were narrow, her legs too long. She wore a pair of blue black shorts, a B.V.D. undervest, and she was barefooted. Her hair had been cut like a boy's, but it had not been cut for a long time and was now not even parted. The reflection in the glass was warped and crooked, but Frankie knew well what she looked like; she drew up her left shoulder and turned her head aside.

"Oh," she said. "They were the two prettiest people I ever saw. I just can't understand how it happened."

"But what, Foolish?" said Berenice. "Your brother come home with the girl he means to marry and took dinner today with you and your Daddy. They intend to marry at her home in Winter
Hill this coming Sunday. You and your Daddy are going to the wedding. And that is the A and the Z of the matter. So whatever ails you?"

"I don't know," said Frankie. "I bet they have a good time every minute of the day."

"Less us have a good time," John Henry said.

The three of them sat at the table again and Berenice dealt the cards for three-handed bridge. Berenice had been the cook since Frankie could remember. She was very black and broad-shouldered and short. She always said that she was thirty-five years old, but she had been saying that at least three years. Her hair was parted, plaited, and greased close to the skull, and she had a flat and quiet face. There was only one thing wrong about Berenice—her left eye was bright blue glass. It stared out fixed and wild from her quiet, colored face, and why she had wanted a blue eye nobody human would ever know. Her right eye was dark and sad. Berenice dealt slowly, licking her thumb when the sweaty cards stuck together. John Henry watched each card as it was being dealt. His chest was white and wet and naked, and he wore around his neck a tiny lead donkey tied by a string. He was blood kin to Frankie, first cousin, and all summer he would eat dinner and spend the day with her, or eat supper and spend the night; and she could not make him go home. He was small to be six years old, but he had the largest knees that Frankie had ever seen, and on one of them there was always a scab or a bandage where he had fallen down and skinned himself. John Henry had a little screwed white face and he wore tiny gold-rimmed glasses. He watched all of the cards very carefully, because he was in debt; he owed Berenice more than five million dollars.

"I bid one heart," said Berenice.

"I want to bid spades," said John Henry. "That's what I was going to bid."

"Well, that's your tough luck. I bid them first."

"Hush quarreling," said Berenice. "To tell the truth, I don't think either one of you got such a grand hand to fight over the bid about. I bid two hearts."

"I don't give a durn about it," Frankie said. "It is immaterial with me."

As a matter of fact this was so: she played bridge that afternoon like John Henry, just putting down any card that suddenly occurred to her. They sat together in the kitchen, and the kitchen was a sad and ugly room. John Henry had covered the walls with queer, child drawings, as far up as his arm would reach. This gave the kitchen a crazy look, like that of a room in the crazy-house. And now the old kitchen made Frankie sick. The name for what had happened to her Frankie did not know, but she could feel her squeezed heart beating against the table edge.

"The world is certainy a small place," she said.

"What makes you say that?"

"I mean sudden," said Frankie. "The world is certainy a sudden place."

Frankie's eyes were half closed, and to her own ears her voice sounded ragged, far away:

For only yesterday Frankie had never thought seriously about a wedding. She knew that her only brother, Jarvis, was to be married. He had become engaged to a girl in Winter Hill just before he went to Alaska. Jarvis was a corporal in the army and he had spent almost two years in Alaska. Frankie had not seen her brother for a long, long time, and his face had become masked and changing, like a face seen under water. But Alaska! Frankie had dreamed of it constantly, and especially this summer it was very real. She saw the snow and frozen sea and ice glaciers. Esquimau igloos and polar bears and the beautiful Northern lights. When Jarvis had first gone to Alaska, she had sent him a box of homemade fudge,
packing it carefully and wrapping each piece separately in waxed paper. It had thrilled her to think that her fudge would be eaten in Alaska, and she had a vision of her brother passing it around to furry Esquimaux. Three months later, a thank-you letter had come from Jarvis with a five-dollar bill enclosed. For a while she mailed candy almost every week, sometimes divinity instead of fudge, but Jarvis did not send her another bill, except at Christmas time. Sometimes his short letters to her father disturbed her a little. For instance, this summer he mentioned once that he had been in swimming and that the mosquitoes were something fierce. This letter jarred upon her dream, but after a few days of bewilderment, she returned to her frozen seas and snow. When Jarvis had come back from Alaska, he had gone straight to Winter Hill. The bride was named Janice Evans and the plans for the wedding were like this: her brother had wired that he and the bride were coming this Friday to spend the day, then on the following Sunday there was to be the wedding at Winter Hill. Frankie and her father were going to the wedding, traveling nearly a hundred miles to Winter Hill, and Frankie had already packed a suitcase. She looked forward to the time her brother and the bride should come, but she did not picture them to herself, and did not think about the wedding. So on the day before the visit she only commented to Berenice:

"I think it's a curious coincidence that Jarvis would get to go to Alaska and that the very bride he picked to marry would come from a place called Winter Hill. Winter Hill," she repeated slowly, her eyes closed, and the name blended with dreams of Alaska and cold snow. "I wish tomorrow was Sunday instead of Friday. I wish I had already left town"

"I doubt it," said Frankie. "I've been ready to leave this town so long. I wish I didn't have to come back here after the wedding. I wish I was going somewhere for good. I wish I had a hundred dollars and could just light out and never see this town again."

"It seems to me you wish for a lot of things," said Berenice.

"I wish I was somebody else except me."