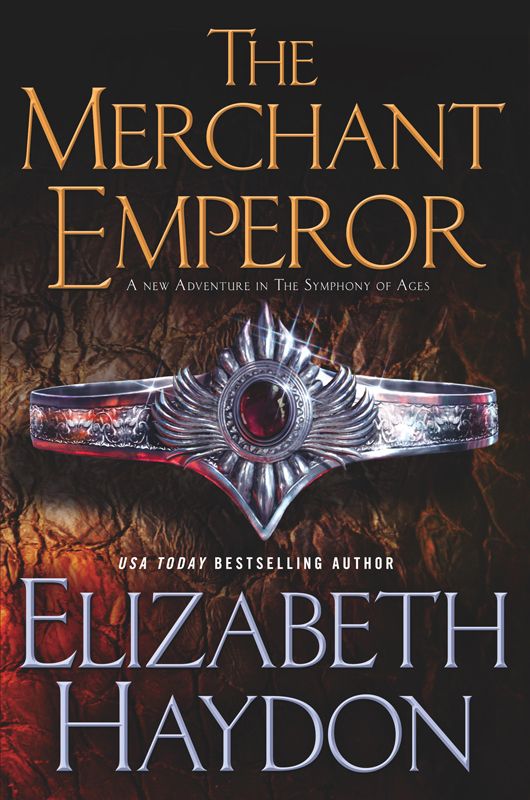 and William, James, and Constance

With gratitude and profound thanks to Tor Books/Tom Doherty Associates and the readers of this tale, for sticking with it through the long silence and the darkness as it returns to the light and nears its end.

Part One: A Hesitant Return to Spring

Part Three: A Moment of Solace in the Advent of War

Part Four: The Calm Before the Storm

Part Five: The Darkness at the Edge of the Plain

Part Six: A Night Without Stars

The Symphony of Ages Books by Elizabeth Haydon

Time, it is a tapestry

Threads that weave it number three

These be known, from first to last,

Future, Present, and the Past

Yet the colors they do add

Serve to make the heart be glad

Past, the warp-thread that it be

Sets the path of history

Every moment ’neath the sun

Every battle, lost or won

Finds its place within the lee

Fate, the weaver of the bands

Holds these threads within Her hands

Plaits a rope that in its use

Can be a lifeline, net—or noose.

IN THE REALM BETWEEN LIFE AND THE AFTERLIFE

In a quiet glade, where green leaves were painted in streaks of light, deep in the silence of a place out of Time, the heavy mist of morning burned off in the gentle glare of the rising sun.

Standing in that diminishing mist was a tall figure, a man clad in a green robe the color of the forest leaves, with eyes of bottomless darkness and brows that matched. A mythic figure, met or heard of only by those who came to this realm, the sleepy wooded place known as the Veil of Hoen, where only the dying were welcome.

The doorstep between Life and the Afterlife.

The bringer of Peaceful Death.

Before him in the glen was an enormous vertical loom on which the tapestry of Time was being woven. Behind that warp-weighted loom sat the figure of a woman, an entity known as the Weaver, the being that embodied the concept of Time in history. Her face was serene, though any living being that had seen it in this drowsy place could never remember what her features looked like afterward.

The Lord Rowan had stood before the Weaver’s loom on an all-but-infinite number of occasions before, observing the cataloguing of Time’s story in the tapestry she was weaving. Every era, every battle, every great feat or terrible loss was reflected in the warp and the weft of the tapestry, recorded in colored threads that told the tale of the ages of the world.

But there was something different this time.

The ends of the long colorful strands of time-thread hanging loosely in the Weaver’s hands were more ragged than he had ever seen them before. Each time he had beheld the Weaver at work, the weft-threads were neat and regular and replenished themselves as she wove them through the stationary warp-threads, so they maintained the same length. Now it seemed as if they had been
burnt
somehow.

So their ends were approaching the tapestry with each movement of the Weaver’s hands.

In addition, the warp-threads, usually strung tight within the loom, were hanging loose at the bottom, their ends charred and ratted with smoke as well.

The Lord Rowan was not certain, but it occurred to him that he might be witnessing the end of Time approaching. Though he himself was a manifestation of Time, he was a thinking and feeling entity enough to contemplate the terror and the sadness that was portended.

Not just for the end of Life itself, but for the Afterlife as well.

In the distance he could hear the sound of horses’ hooves dancing in preparation. The Lord Rowan knew this sound from long and terrible memory. It was the foretelling of the Ride, the gathering of his three brothers, the other, less peaceful, manifestations of Death, making ready to dispense it in the chaotic, thundering horror for which they were known, answering the call.

This time, however, for the first time, he had not heard that call himself.

Meaning that the wave of death, when it came, would have no peace associated with it.

He crouched down beside the Weaver and studied the tapestry.

Though he and his wife, the Lady Rowan, who was known as the Guardian of Sleep, had little awareness of the world beyond their realm, the Veil of Hoen, they did occasionally venture forth when summoned by fate.

He examined the area that seemed to contain an imperfection.

In the warp of that place, two weft-threads had been woven together in two separate places in the tapestry. One was gold, shining, the color of the sun at its peak on a midsummer day. The other was a copper color, a red-gold that gleamed almost metallically.

The Lord Rowan was fairly certain he had seen those colors before, in the hair of two living beings that had visited his realm.

A young man with the blood of dragons in his veins, torn asunder in a battle with an ancient demon. A man with hair the color of copper.

And a golden-haired woman who had come with a group of demonic children needing salvation of body and soul. Children of the same demon the man had fought.

Apparently these two people had met twice in history, not once as was the law of Time.

And in the second meeting, Time had been altered to allow for it to happen.

The Lord Rowan was not certain if the altering of Time had been undertaken to prevent the burning at the ends of the threads in the Weaver’s hands.

Or if it had caused it.

The sound of hoofbeats in the distance grew louder.

The Lord Rowan closed his eyes.

Far away, in the deepest depths of the material world, another being felt, rather than heard, the hoofbeats as well.

That being was as old as the world was old, though in all the millennia of its life it had never woken, even for a moment.

Which was the salvation of that world.

For when it finally did wake, the being, a beast of unimaginable size and even more unnatural appetite, would consume the Earth of which its body comprised one-sixth.

The oldest entity ever to be called by the name.

The ancient wyrm, a child born of one of the first clutch of eggs of the race of dragons at the birth of the world, stolen by demons that would use it against that world and who had hidden it away within its frozen depths, where it would remain asleep, growing, gaining strength.

Until at last it was awakened.

And while that had always been a terrible possibility, the reality had never occurred.

The beast stretched lazily in the cold depths of its lair, sending tremors through the Earth’s mantle, earthquakes that split the ground in inexplicable tremors, or shook the teacups off the shelves in the larders of farm women. Volcanoes spilled forth lava, and tall, destructive waves lashed the coasts of the seas.

No one who felt the results of its movement knew what was happening.

For the moment, it didn’t matter.