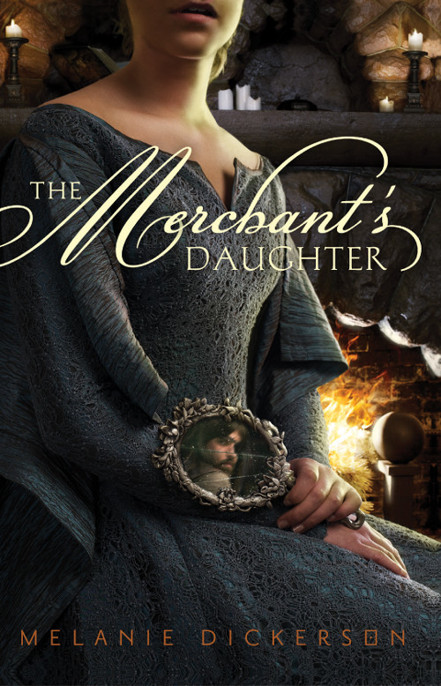 Other Books by Melanie Dickerson

To Joe, Grace, and Faith

Annabel sat in the kitchen shelling peas in to a
kettle at her feet. A bead of sweat tickled her hairline while only the barest puff of warm air came through the open door.

Her brother called from the main house. As she hurried to finish shelling the pea pod in her hand and see what Edward wanted, the pot over the fire began to boil over. She jumped up, banging her shin on the iron kettle on the floor.

Snatching a cloth from the table, she used it to pull the boiling pot toward her and away from the fire. But as the pot swung forward on its hook, the cloth slipped and her thumb touched the lid. She jerked back. Spying the bucket of water she had used to wash the peas, she plunged her hand into it.

He thinks he doesn’t have to help with the work, but I should abandon my task and come running whenever he calls.

She blew on her burning thumb as she hurried from the kitchen.

Edward stood propped against the wall in the spacious front room of their stone house, scraping under his fingernails with a
sharp stick. When he lifted his head, his green eyes fixed her with a hard look. “Mother was summoned this morning to appear before the hallmote.”

“I know that.” The manorial court, or hallmote, was being held today, and a jury of twelve men from their village of Glynval would decide the penalty for her family’s neglect of their duties.

“The new lord is coming to Glynval. Even if the hallmote is lenient, I’ve heard he is far from forgiving. What will happen to us? To you?” He thrust the stick at her face.

Annabel bit back annoyance at her brother’s derisive tone. For the past three years he had stood by, just like the rest of her family, refusing to do any of their required work in the fields, putting them all in this situation.

“I’ve decided to help with the harvest this year.” She crossed her arms as her brother moved closer to her. “We should all help.”

“Do you want to end up sleeping in ditches and begging bread?
Help with the harvest?
It’s too late to start doing your share now, little sister.” He flung the words at her, jabbing his stick in her direction with each phrase. “If you are wise, you will try to think whose bread you need to butter to see that you have a home after today.”

Annabel’s back stiffened, and she prepared for whatever offensive thing her brother would say next.

“We have to fend for ourselves. You’re seventeen years old now and well beyond the age of accountability. Maybe you know of someone who might marry you. Do you?”

“Nay, I do not.” She glared back at him, wishing she could think of a scathing retort.

He began rolling the stick between his fingers, smirking at it. “But there is someone. Someone who is prepared to smooth over our trouble with the new lord and pay the fines so we don’t have to work in our lord’s fields.”

Her brother wasn’t concerned about her, she knew — he wanted to solve his own troubles by throwing her to the wolves. But which wolf was he planning on throwing her to?

A pleased smile spread over Edward’s thin lips. “I am speaking of Bailiff Tom.”

Bailiff Tom?
“He’s as old as Father!” Annabel’s face burned at the notion. She tried to think of some dignified reply, but the words tumbled out. “If you think … for one moment that I — “ She clenched her jaw to stop herself.

“He has been widowed these three years. Surely you’ve seen him look at you with the eye of one who is looking for a wife.”

She
had
seen the bailiff once or twice with a lecherous sneer on his pinched face — and been thoroughly disgusted that a friend of her father’s would stare at her that way. Marry Bailiff Tom? She would rather sleep in a ditch.

“You will marry him, because there’s no other way.” Edward leaned over her, his eyes cold and dark. “Besides, where will you get a better offer of marriage than from the bailiff?”

“I won’t marry him.” Annabel spoke through clenched teeth. “If Father were still alive, he’d never force me to marry Bailiff Tom.”

Her brother turned his attention back to cleaning his nails. “I’m afraid you don’t have a choice. I’ve already told the bailiff yes.”

Heat climbed up her neck and burned her cheeks.
How dare you?

“Don’t look at me like that, dear sister. I had no choice. The new lord arrived in Glynval last night, and the reeve came this morning when you were out picking peas, summoning Mother to come to the manor house. Something had to be done to help our poor family.” He gave her a simpering grin. “Oh, I nearly forgot. Mother wants you to go to the village, to the butcher, and get us a goose for dinner.” Her brother raised his brows in challenge.

She glared at him then lifted her nose in the air, as if her life weren’t teetering on the edge of a cliff. At least this errand would get her away from Edward and give her time to think. Snatching the piece of delicate white linen from a wooden peg by the door, she wrapped it around her head, securing all loose hair away
from her face, and tied it at the nape of her neck. She jerked the door open and flung it closed behind her.

The pain in her thumb drew her notice to the new red blister. She blew on it as she started down the lane toward Glynval and William Wagge’s butcher shop.

Spending the last of their money on a goose on the day their fate was being decided by a jury of their fellow villagers. Pathetic.

They would be penniless outcasts tomorrow if Mother couldn’t persuade the jury to have mercy on them. But could they truly hope for leniency from a village that resented them for not doing their share of the work?

Her family did not deserve mercy. Father had been a wealthy merchant, fully able to pay the censum so that his wife and children did not have to do the lord’s required fieldwork during harvest and at other times of labor shortage. But they were left destitute when his ships were destroyed in a storm, and shortly after that, he died in the pestilence. Even as the family of a freeman, due to their inability to pay the censum, they were now required to perform some of the same duties and work as the villeins. But her mother had insisted her health was poor and she was unable to work, and in her typical manner, she also announced her children should not have to do such menial work as harvesting grain.

For three years her family shirked their duties and went unpunished, kept safe by the old lord’s corrupt steward, who managed to postpone their fines.

But with the new lord arriving, Annabel had a feeling her family’s comeuppance was due in full. Bailiff Tom’s offer was proof enough. The bailiff, an old family friend, was using their lapse to his advantage, holding their predicament over them to force Annabel to marry him.

The path to Glynval was empty, and Annabel realized most of the adults of the village would be at the hallmote to watch and see how each case played out, who won their complaint against whom, and what the ale brewers’ fines would be. She usually stayed away from the proceedings, but today she would go to
see how her family fared with the twelve jurors. Whatever the jurors assessed, whatever the fine or punishment, it would be supported and upheld not only by the lord’s steward but also by the assembled villagers.

Lost in her thoughts, Annabel was surprised to see a form emerge from the shadow of the trees around the bend in the road. The figure progressed haltingly toward her, his right hip twisting at an abnormal angle with each step he took. Stephen Blundel.

She smiled at her friend. Having grown up with her, Stephen was more like a brother to her than her own blood brothers were. Stephen lifted his hand and waved.

At that moment, seven ragged, barefoot boys crept out from the trees and surrounded him. The malicious looks on their faces made her heart thump in her throat. Stephen neither flinched nor altered his pace, as though he did not see them.

With a flick of his wrist, the tallest boy sent a small stone flying. Then they all hurled rocks at Stephen, shouting ugly names at him. Dragging his foot along the ground and snickering, one of them mimicked Stephen’s crooked stride.

Annabel tried to read Stephen’s expression, but he stared straight ahead, his jaw set.

Frustration with the morning’s events surged through her. “Get away!” she screamed at the boys. She bent and dug her fingers into the dirt as she snatched up some rocks of her own. “You leave him alone or I’ll — !” She drew back her fist full of rocks and aimed them at the largest boy, the leader.

The boys scattered and halted a few feet away then formed a circle around her.

Turning on her heel, she tried to face them all at once and pin them down with her glare. They were younger than her, but some of the boys were tall enough to look Annabel in the eyes.

She checked over her shoulder. Stephen’s awkward gait had taken him far down the road, but he stopped and turned around. He frowned, probably waiting to see if she would need his help, and perhaps a little embarrassed that she had defended him.