Read The Mermaid in the Basement Online

The Mermaid in the Basement 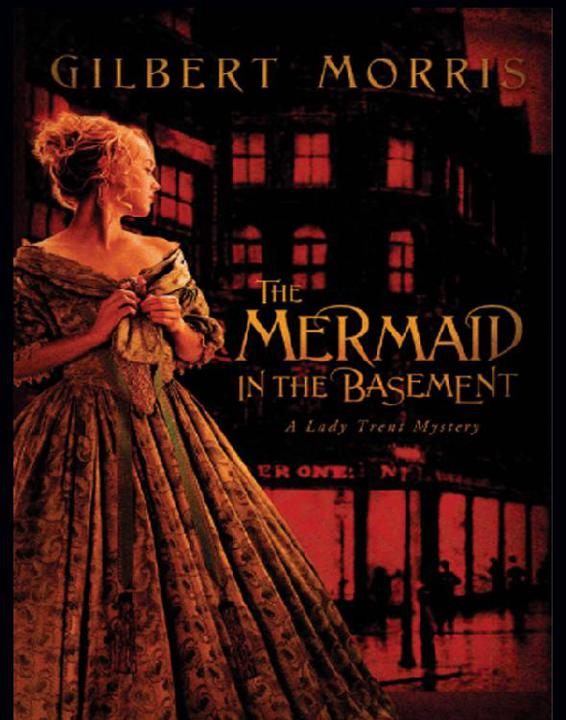 OTHER NOVELS BY GILBERT MORRIS INCLUDE

The House of Winslow Series

Visit your online bookstore
for a complete listing of Gilbert’s works.

All rights reserved.No portion of this book may be reproduced, stored in a retrieval system, or transmitted in any form or by any means—electronic, mechanical, photocopy, recording, scanning, or other—except for brief quotations in critical reviews or articles, without the prior written permission of the publisher.

Thomas Nelson, Inc. books may be purchased in bulk for educational, business, fund-raising, or sales promotional use. For information, please e-mail [email protected]

“The Darkling Thrush” by Thomas Hardy.

Publisher’s Note: This novel is a work of fiction.Names, characters, places, and incidents are either products of the author’s imagination or used fictitiously. All characters are fictional, and any similarity to people living or dead is purely coincidental.

The mermaid in the basement / Gilbert Morris.

Excerpt from
A CONSPIRACY OF RAVENS,
Book Two in the Lady Trent Mysteries

To the Curlin Family

The family is in trouble in America—but the Curlin Clan gives me hope. God sets the solitary in families, and it is a tremendous encouragement to me when I think about all of you—alive and well and serving God! So here’s to you, Curlins:

Jay Curlin—a man after God’s own heart!
Bonnie Curlin—a true handmaiden of the Lord!
and the wonderful, beautiful kids—

A
s Clive Newton made his way along Drury Lane headed for the Old Vic Theatre, he felt the rush of excitement that always came when he attended any of Kate Fairfield’s performances. As he crossed the intersection, the cobblestones were still gleaming from the light evening rain. He tossed a halfpenny to the crossing-sweeper, a small boy who swept away manure and mud. The boy bit the coin, then gave Clive a snaggletoothed grin. “Thankee, sir!”

A woman wearing a revealing dress, her face painted, appeared out of the shadows. She attached herself to Clive’s arm and winked at him. “Come along wif me, husband. I’ll show yer a good time.” Shaking his head, Clive moved away, followed by the harlot’s curse.

Hurrying along the street, he was struck by the fact that all classes of society mingled in London’s streets. One expected harlots to be in the Seven Dials district or in the Haymarket, but it seemed odd that on this main thoroughfare, the rich and the poor, the good and the evil, formed a strange confluence. Some of the women, illuminated by the gaslights, were past their prime; most of them were rattle-cheeked and slack-bodied. There were some young women who came from the country to seek their fortune, but most of them sank to prostitution.

The theatre crowds—filled with respectable women of wealth, their jewels flashing in the reflection of the gaslights—stood side by side with the poorest of London.Homeless children, or Street Arabs, no more than eight or ten years old, swarmed the street. Some pulled at the sleeves of men who whispered crude invitations.

Reaching the Old Vic, Clive pressed his way into the crowded foyer. Massive crystal chandeliers threw their blazing candescence over the crowd, and from the hands and necks and headdresses of the women, jewels flashed. Diamonds sparkled in elaborate coiffures, at arms, throats, wrists, and hands. The foyer became a river of activity, pale shoulders gleaming amid the brilliant colours of silk, taffeta, voile, and velvet dresses, while the uniform black of men’s dress made a violent contrast. Not all of the crowd that gathered in the Old Vic were wearing diamonds. Intermingled with the wealthy were men and women dressed in plain clothes. Indeed, attending the theatre was one of the few instances of true democracy in England!

Clive hesitated, taking in the scene, then impulsively turned and made his way to a doorway that led from the foyer.He walked down a narrow corridor that opened into a large area backstage. He stopped short, watching the actors, actresses, stagehands, prompters, and others necessary to putting on the production of
Hamlet
move about. They reminded Clive of a swarm of ants rushing about frantically in aimless activity. Moving toward the row of dressing rooms, he stopped before one of the doors and knocked. A voice called out, and he stepped inside.His features lit up at the sight of the woman who had risen from her chair and held a handkerchief in her right hand. “Clive, what are you doing here?”

Katherine Fairfield, a reigning star of the production, was no more than medium height, but her carriage was so erect that she seemed taller. She was wearing a dress that was not intended to be particularly revealing, being fitted to the fair Ophelia in the play, an innocent young girl, but Kate’s spectacular figure could not be concealed even beneath such a dowdy exterior. She had dark red hair, enormous dark eyes, and diaphanous skin the envy of every woman in London. Just the sight of her had an effect that reached across the room, stirring him, but she repeated with a touch of irritation, “What are you doing here?”

“Well, you can’t see me now. The performance starts in a few minutes.”

Clive moved forward and put his arms out, but Kate frowned and shook her head. “There’s no time for that now.”

“But I haven’t seen you in four days, Kate.”

Kate Fairfield was adept at handling men. It was her stock in trade. She smiled and put her hand on Clive’s cheek. “After the performance. Come back then.”

Disappointment swept across young Clive’s face, but he knew her well enough to obey, so he left the room, closing the door behind him. Kate stared at the door and then laughed. “Young fool!” Then she turned back for one final look at her makeup. A muffled announcement came to her: “Curtain—five minutes!” She turned and stepped outside. Seeing a tall, dark-haired young man leaning against the scenery, she walked over to him and smiled winsomely. “You’d better be careful, Dylan.”

Dylan Tremayne turned to face Kate. He was a strikingly handsome man of twenty-seven. Exactly six feet tall, his athletic form was unmistakable through the tights and close-fitting tunic of his costume for the part of Laertes. A lock of his glossy, coal black hair curled over his forehead. He had a wedge-shaped face, a wide mouth, and a definite cleft chin.His most striking feature, however, was the strange blue of his eyes. They were exactly the colour of the cornflowers that dotted the English countryside, and they made a startling contrast against his jet black hair and tanned complexion. Dylan had served for several years as a soldier in India. Despite his Welsh roots, he was so deeply tanned by the sun that he never paled.

“And what is it that I need to be careful about, Kate?” he asked. He turned and watched the woman carefully, with something guarded in his manner. “And, by the way, why are you tormenting young Newton like that?”His voice was smooth, and his choice of words gave evidence of his Welsh blood.

“Of course he is. Every man is—except you.”Kate studied Dylan carefully. He was the one man she had encountered who had resisted her charm. He had become, in effect, a challenge to her womanhood. It amused her to toy with men, but Dylan had resisted her advances—and this piqued the ego of the actress.Actually,Kate did more than “toy”with men.Her mother had been abused by a series of men, and she made it her burning ambition to see that this never happened to her daughter. She’d set out to instill in Kate from the beginning that a woman must
conquer
men.“Draw them by your beauty, then use them! Take what you can from men and laugh at them when you cast them off!” was the advice she gave Kate—who learnt her lesson well.

Manly Wade Wellman - John the Balladeer 05 by The Voice of the Mountain (v1.1)
Fifty Shades of Alice Through the Looking Glass by Melinda Duchamp
Poppy's Picnic (Poppy's Place Short) by Beck, Stephanie
Fair Exchange by Jennifer Smethurst
The Luminosity Series (Book 1): Luminosity by Bambenek, J.M.
Eye of the Beholder by Jayne Ann Krentz
All of Me by Kim Noble
Vampire University (Book One in the Vampire University Series) by Erickson, VJ
Urge to Kill by John Lutz
If You Knew Then What I Know Now by Ryan Van Meter