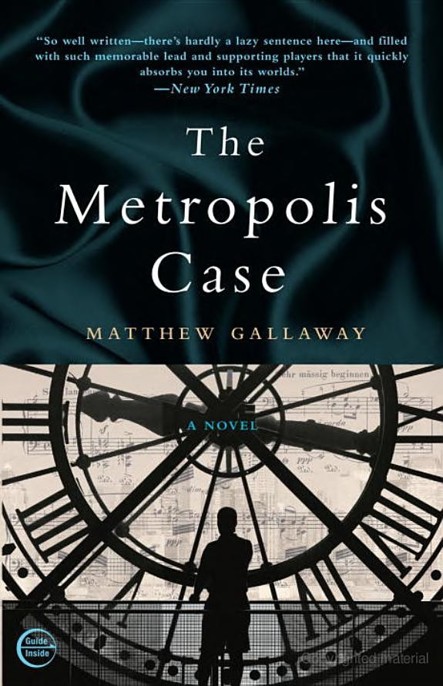 All rights reserved.
Published in the United States by Crown Publishers, an imprint of the Crown Publishing Group, a division of Random House, Inc., New York.
www.crownpublishing.com

C
ROWN
is a trademark and the Crown colophon is a registered trademark of Random House, Inc.

Translation of the
Liebestod
from
Tristan and Isolde
used with kind permission of Christopher Bergen.

First Act: Contingency
Chapter 1: The Tristan Chord
Chapter 2: Through Its Street Names, the City Is a Mystic Cosmos
Chapter 3:
Der Mann ohne Eigenschaften
Chapter 4:
Il n’existe pas deux genres de poésies; il n’en est qu’une
Chapter 5: The Marble Index
Chapter 6: The Apology of Socrates
Chapter 7: Taking Drugs to Make Music to Take Drugs To
Chapter 8: The Diary of One Who Disappeared
Chapter 9:
Expériences nouvelles touchant le vide
Chapter 10: Rembrandt Pussyhorse
Chapter 11:
Meine Musikdramatische Idee
Chapter 12:
Kritik der reinen Vernunft
Chapter 13: Spiderland
Chapter 14: The Experience of Our Generation: That Capitalism will Not Die a Natural Death
Chapter 15: A Kind of History of My Life
Chapter 16:
Je n’ai pas oublié, voisine de la ville
Second Act: Irony
Chapter 17: Dial M for Motherfucker
Chapter 18: The Psychology of the Transference
Chapter 19: Concluding Unscientific Postscript to the Philosophical
Chapter 20: A Section That May Be Skipped by Anyone Not Particularly Impressed by Thinking as an Occupation
Chapter 21: The Past Unfolds in the Wax Museum like Distance in the Domestic Interior
Chapter 22: Original Stories from Real Life
Chapter 23: Loveless
Chapter 24: The Motion of Light in Water
Chapter 25: The World as Will and Representation
Chapter 26: What Fun Life Was
Chapter 27: The City as a Landscape and as a Room
Chapter 28: The Fighting
Téméraire
Tugged to Her Last Berth to Be Broken
Chapter 29: Blue Monday
Chapter 30:
Ce Livre pourrait s’appeler
Les enfants de Marx et de Coca-Cola
Chapter 31: The Intermittences of the Heart
Chapter 32: Do You Want Chillwave or Do You Want the Truth?
Chapter 33: This Screaming Girl Has Suddenly Realized That the Body Lying Under the Blanket Is That of Her Mother
Chapter 34: Into the Millennium (The Criminals)
Third Act: Solidarity
Chapter 35: We have to Wake Up from the Existence of Our Parents: In This Awakening, We Must Give an Account of the Nearness of That Existence
Chapter 36: The Heart Is a Lonely Hunter
Chapter 37: The World Is the Totality of Facts, Not of Things
Chapter 38: The True Artist Helps the World by Revealing Mystic Truths
Chapter 39: On Fire
Chapter 40: Fashion Is a Canon for This Dialectic Also
Chapter 41: Cocksucker Blues
Chapter 42: Mrs. Stevens Hears the Mermaids Singing
Chapter 43: In Distortion-Free Mirrors
Chapter 44:
La vraie douleur est incompatible avec l’espoir
Chapter 45: There Is a Light That Never Goes Out

S—news!—your elder brother has procured four tickets to the opera on the Saturday night of your visit next month AND invitations to the after-party at Demoiselles, an old and rather exquisite French restaurant not far from Lincoln Center. There will be champagne; there WILL be chocolate soufflés. (Obviously M had a big hand in making this happen: you’ll be able to thank HER in person.) We’re seeing Tristan and Isolde by Richard Wagner, which means I should fill you in on a few things starting now, to prepare you. You’ll be happy to note (as I read somewhere, or possibly imagined) that certain listeners who attended the opera’s premiere 130-something years ago did in fact GO INSANE and were shipped off to asylums in the Bavarian Alps with a diagnosis of “Tristania.” I can hear you muttering “apocryphal” in your Ph.D. voice, and while I’m not inclined to disagree, insanity IS perhaps an understandable reaction if we put ourselves in the shoes of 19th-century listeners (always an interesting exercise at the opera, or at least the old ones) and consider the unprecedented volume of the orchestra (one of the largest ever assembled) combined with a complete absence of recorded sound to that point in history—i.e., NO WALKMEN?!—and an equally unprecedented musical dissonance (except for perhaps a few “tone poems” by the
supremely gorgeous and talented Franz Liszt—who by the way was Wagner’s father-in-law and whom he shamelessly ripped off both financially and artistically, in the way things were done back then)—I DIGRESS.

First the easy stuff: on its most superficial level, Tristan and Isolde is about an affair—surprise!—between T and I that unfolds as she’s about to be married to his uncle (“uh-oh” is right), after which scandal and tragedy ensue, THE END. What’s more interesting is that their love, in addition to being illicit, is very much entwined with an unceasing torment and longing (represented by “the day” or more broadly “life”), not just for each other but for a more permanent form of relief (otherwise known as “the night” or “death”). BEAR WITH ME—IT’S NOT AS DEPRESSING AS IT SOUNDS! Or even if it is, it doesn’t matter because the music—despite possessing very little that might be considered a “tune”—is lush and restless and revolutionary to the extent that, like so many great works of art (leaving aside the question of exactly which ones), it encapsulates much of what came before and predicts much of what followed. Or to put it in more musico-historical terms (whatever, I know it’s not a word), it’s essentially—and perhaps shockingly, for those of us who get excited to find traces of ourselves in such things—“modern” for its failure to ever quite resolve, or at least until the very end, by which point—if it’s a good performance, which I expect given the parties involved—you’ll be reduced to a spoonful of quivering jelly. The piece is in a state of constant flux, with one atonal chord giving way to the next and then to the next and so on and so on and so on, like you’re listening to the aural equivalent of one of those time-lapse photography projects of an endlessly mutating landscape. My own theory (by which I mean I may or may not have also read this somewhere) is that Tristan contains the seeds of modern “abstraction” and “psychology” that ultimately defined so much of the twentieth century, i.e., it’s no accident that in the wake of
Tristan (1865) you have impressionism (Elstir!), cubism, Duchamp (specifically Nude Descending a Staircase, No. 2), Freud and Jung and V. Woolf and Einstein (that’s for you, Professor Vallence), and eventually, I don’t know, the Smiths? (Hey, I never claimed to be an academic!)

Which is not to say Tristan will hammer you over the head—for most “contemporary” (such a horrible word, ruined by furniture catalogs and bad radio stations) listeners, it’s a more subtle form of annihilation. (Speaking of which, I ordered you a copy: listen to it, ideally more than once—SEE ABOVE, REGARDING RISK OF INSANITY.) Take note of the instrumental section at the beginning (the famous first-act prelude), the quiet call-and-response of the cellos and winds, the pizzicato burst of strings that will (after you’ve acclimated) strangely dictate the beat of your heart to match the languid tempo of the piece. And once you’ve listened a few times, I guarantee the music will start to “infect” you (but in a good way), so that—if you’ll allow me to play “rock critic” for a few seconds—you’ll start to hear Tristan echoed everywhere, in the beautiful, angry chaos of our beloved Velvet Underground, in the ethereal, tremulant white noise of My Bloody Valentine, or even—and perhaps more to the point, given where you’ll be staying—in the endless tides of traffic moving into and out of Manhattan along the West Side Highway, five hundred feet below my balcony in Washington Heights. You should also note that however “difficult” it may be for listeners to digest, it’s even MORE dangerous to sing; Tristan is the super-double marathon of operas, and its history, like that of Mt. Everest, is littered with the corpses (both literal and figurative) of those singers who made the mistake of attempting it too early in their careers, or lacked the proper training, didn’t have the right kind of voice, or—saddest of all—simply expired under the weight of so much dissonant longing.

In practical terms, what all of this means is that you and C should absolutely, positively resist the temptation
to plan anything on Saturday afternoon that doesn’t involve napping, or at most lounging, because curtain is at 7:00 p.m., the opera is five hours long (I KNOW), and dinner won’t be served until 1:00 a.m. or thereabouts. (I’ve learned that most denizens of the opera house, like those of the seediest East Village punk-rock venues, are truly nocturnal, which perhaps explains some of my affinity for both?) Plan to wear whatever you’d like as long as it’s “fabulous” (I offer in a half-ironic tone), but there’s really no such thing as overdressing for the opera—especially on opening night—so when in doubt, DO NOT HOLD BACK. (By the way, I’m also imposing a similar regimen on P, who is equally uninitiated and who will be joining us as MY date.) So brace yourself, little S, it’s going to be an evening you won’t forget too soon; the curtain will rise to lead us to new lands from which we—like so many before us—will return both destroyed and cleansed, knowing we’ll never be the same! xoxo M

2
Through Its Street Names, the City Is a Mystic Cosmos

NEW YORK CITY, 1960. Anna Prus stepped out of her apartment building onto Seventy-fourth Street, where she paused to glance back at Central Park, which looked opaque and grainy like an old newsreel. It had been snowing for days, but a sallow, expectant glow emanating from the crenellated perimeter of the park told her the storm was nearing an end. While she did not relish the idea of negotiating a trip downtown, the transformation of the city into a tundra, with squalls of powder and amorphous mounds where there
had once been cars, mailboxes, and shrubs, struck her as the perfect accompaniment to the magic, improbable turn the day had taken, now that she was about to make her Isolde debut at the Metropolitan Opera.

Though Anna was not an unknown, she had to this point in her career been relegated to smaller houses and (except for some minor roles) hired by the Met as an alternate to the type of leading soprano she had always wanted to be. But as sometimes happened with singers her age—Anna was forty—her voice, after six years at the conservatory and over fifteen more of training, auditioning, and performing, had at last blossomed, giving her reason to believe that she had found her calling in the Wagnerian repertory. Which is not to say her future had been unfurled like a red carpet; if anything, her reputation as a dependable but hardly breathtaking talent still preceded her, and for this current production, she had been brought in only to “cover” the Isolde and so had expected—as she had always done in the past—to spend her nights in the wings, anxiously hoping and not hoping (because she was not one to wish ill health or misfortune on anyone) that she would finally get her chance.

Blue Genes by Christopher Lukas
A Cry at Midnight by Chancellor, Victoria
Ghost of a Promise by Moran, Kelly
An Heir to Bind Them by Dani Collins
I Bought The Monk's Ferrari by Ravi Subramanian
An Unnatural Daughter: A Dark Regency Mystery by Katherine Holt
Asking For Trouble by Tunstall, Kit
Grace Revolution: Experience the Power to Live Above Defeat by Joseph Prince
Fruit of All Evil by Paige Shelton
Outcast by Cheryl Brooks