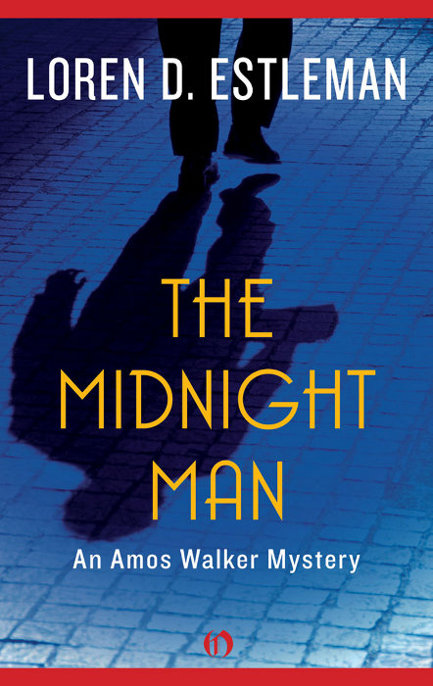 To the Family Estleman

Four against the world

Now hast thou but one bare hour to live

And then thou must be damned perpetually.

That time may cease and midnight never come.

L
OOK FOR US
on starless nights when the moon is new. Look closely, because we’re hard to see. We don’t run in packs like wolves or feral dogs; we fear each other as much as we fear the light. The shadows are our home, and we know them as you know the staircase to your bedroom, the light switch on your bathroom wall. Look for us, but keep your distance. We’re the Midnight Men, and the prey we’re stalking could be you.

It was one of those gummy mornings we get all through July and August, when the warm wet towel on your face is the air you’re breathing, and the headache you wake up with is the same one you took to bed the night before. Milk turns in the refrigerator. Doors swell. Flies clog the screens gasping for oxygen. Everything you touch sticks, including the receiver you pick up just to stop the bell from jangling loose your tender brain.

“Yeah?” If it’s eloquence you seek, don’t call me before breakfast.

The voice on the other end was female and very brisk. “Amos Walker? Please hold for Owen Mullett.” After a muffled click, I was treated to the score of a hit musical I had managed to avoid when it played Detroit.

My eggs were making angry noises in the kitchen. Yawning bitterly, I carried the telephone in from the living room and propped the receiver under my chin while I diced part of a green pepper into pieces the size of pencil shavings and sprinkled them over the yolks and whites in the skillet. Next to cigarettes and whiskey, spices are my only serious addiction, courtesy of some gypsies on my mother’s side. I let the eggs cook a while and then killed the gas. The music was still playing. I turned on the radio over the breakfast nook. It was tuned to the all-oldies station as usual. The telephone cord wouldn’t let me sit down, so I placed the plate with the eggs on the edge of the table and ate standing up.

I was pouring a second cup of coffee when the telephone music stopped. I set down the pot and held the receiver out to the radio speaker Little Richard was screaming “Lucille.” I gave it five bars and then flipped it off and returned the instrument to my ear.

Someone was diddling the plunger. “Hello? Hello?” It was a harsh, impatient voice, the kind that comes with the key to the executive washroom. “Damn it, is anyone on this line?”

“What are you talking about? I don’t have time for kid games. Oh, to hell with it. This is Owen Mullett. Do you remember me?”

“I should say I do, Mr. Mullett. And even if I didn’t, I’d remember your money.” There was no reason I shouldn’t. So far it had settled two alimony payments, overhauled my Cutlass, put new wallpaper in my office, replaced the venerable magazines in my reception room, and installed fresh lettering on the door.

Owen Mullet agreed. “Five hundred dollars a week just for staying available is hard to forget. Don’t think Transcontinental Transport takes sums like that lightly in today’s economic climate. We have investors to whom the notion of retaining a private detective—”

He cleared his throat. It sounded like heavy static on the line. “Do you have any objection to going to the University of Michigan?”

“Be serious, Walker. There’s a load of bound newspapers due at the Ann Arbor campus this afternoon for microfilming. They’re all from the last century. Some collectors would pay a bundle to have them, and they wouldn’t ask too many questions about where they came from.”

“All collectors are nuts,” I said. “I tend to have not a lot to do with them, ever since a cop I know arrested one for collecting dead women’s shoes.”

“It’s the driver we’re interested in, not the collector.”

Again he cleared his larynx. You can measure a company man’s importance by the amount of presidential shoe polish lodged in his throat.

“As you know, we’ve been plagued by hijackings lately,” he began. “A lot of hijackings. Far more than any of our competitors.”

I ate my eggs and listened. I wish I hadn’t.

Like everything else, tailing a subject requires certain accessories: Water cooler. Dried foods. Portable electric razor. Binoculars. Paperbound books to help while away hours spent outside apartment buildings and motels. Complete change of clothing. Blankets. Gasoline credit cards. Change for parking meters and pay telephones. I had enough stuff jammed under the bucket seats of my little Cutlass to stock a bomb shelter. You never know how long you’ll be out on one of these things. One time I picked up a salesman suspected of larceny from his employer Thursday afternoon and didn’t get home until 3:00
A.M
. Monday. Oh, and a large empty coffee can.

I had a full tank of gas and was parked in a loading zone across from a garage on Van Dyke, pretending to read the
Free Press
through a pair of sunglasses. The garage was a 1950s construction, white gloss enamel over cement block, with old-fashioned pumps out front, soon to be replaced by the kind that registers your purchase in liters, which was the Bureau of Weights and Measures’ way of allowing merchants to charge more for less—as if they needed help. Enough die-cast letters had dropped out of the legend
NORM’S SUPER SERVICE
over the big doors to make it unintelligible.

A cabover Kenworth with trailer was parked next to the building facing the street, big as Judgment Day and bearing the company’s red double-T logo on the front of the box. Its diesel was idling, belching round black smoke signals out of its chromed stack. The rig was waiting for a party named Dooley Bass, half owner of Norm’s Super Service and sometime driver for Transcontinental Transport. He had been hijacked twice in three months and his employers were beginning to wonder.

I knew he was going to be sobering news when he emerged from the cool, dark interior of the garage, squinting into the sun and dragging a beefy brown forearm across his brow. He was all muscle and thick hard belly under a green work shirt stained dark under the armpits and down the front, and he wore his dirty blond hair in bangs the way Chuck Connors used to in
Branded
. He had a big, clean-shaven jaw and very pale blue eyes against the bronze of his face. He was younger than I. I hoped we could keep our relationship on a vehicle-to-vehicle basis.

He walked clear around the rig, kicking each of the outside tires with a square-toed cowboy boot that for a change looked as if it might have seen use west of Kalamazoo. His muscles bulged as he gripped the handbar and swung his six-feet-something up into the driver’s seat. The door whammed shut, there was the plaintive
awharr
of a great transmission grinding reluctantly into grandpappy low, the engine throbbed louder, and when the traffic let up, sixteen tons of steel and rubber trundled, groaning and hissing, onto Van Dyke heading north. I let two cars go by and then pulled out behind. The corrugated steel trailer was easy to overlook, like a brontosaurus on a whole wheat roll.

I followed him up the ramp onto the westbound Edsel Ford Freeway and made myself comfortable, unsnapping the .38 in its police holster from my belt and laying it on the seat next to my hip. The air conditioner worked for two minutes and then quit, but with the vents open and my window down, the cool air coming in from outside felt good against my overheated skin. I got the radio going. Sarah Vaughan sang “It Ain’t No Use.” It was one I liked. If there was an omen in the refrain, it was wasted on me. I fired up a Winston and let the slipstream suck the smoke out the window.

Feeling a responsibility to my client now that I was on retainer, I had purchased fresh batteries for the paging device in my shirt pocket and was wearing it everywhere these days. It hadn’t beeped once since. I hadn’t really expected it to. Aside from the trucking firm, the only customer I’d had in a month was a kid who’d paid me a buck and a half to find his dog. I’m still looking for it, by the way.

There were worse assignments than this one, most of which I’d had. I’d heard rumors that trees and grass grew between here and Ann Arbor, and on a day like this coeds there were not known to wear very much while walking across campus. In Detroit they wore chain mail and carried mace in their handbags.

We hovered around the speed limit until we cleared the city, where Dooley shook the law out of his hair and opened the throttle. The trailer pulled away from me like the roadrunner ditching the coyote. The Italians can brag all they want, but nothing without wings can catch a fully loaded semi when the driver chooses to slip the surly bonds of earth. I tried for a while, then fell back when the born-again Cadillac mill under my hood started shimmying.

I wondered if he’d made me. Just in case, I waited until he got hung up in traffic near Metropolitan Airport and passed him in the fast lane. After half a mile with the truck in my rearview mirror, I allowed myself to get bogged down behind a slow-moving van loaded with kids. By that time he was in the open, and the thunder of his engine drowned out the radio as he swept past on the right. I waited for a hole and crept out into his wake.

The brake lights of the cars that separated us flashed on in ragged order. He had slowed down suddenly. I had to pump my own brakes to avoid a pileup. The other vehicles started pulling around him, and when we dropped to forty-five it was either pass him again or yell my game plan out the window. I moved toward the outside lane. Abruptly he swung left. I yanked the wheel right to keep off his bumper, and drew abreast of his rear wheels.

Something big caught my eye in the rearview mirror; but before I could react, a soot-blackened tanker labeled
EXPLOSIVE CHEMICALS
rumbled alongside me in the far right lane. I looked up into the driver’s shiny black face leering down at me through his open window. I was sandwiched but good. There was a third truck up ahead, and when I glanced up at Dooley on my left he was leaning as far out the cab window on the passenger’s side as he could without surrendering his grip on the wheel. A long red cylinder spat and fizzled in his corded right hand. A live flare.

A Knight to Remember by Christina Dodd
The Gazelle Who Caught a Lion by Hyacinth, Scarlet
Japanese Fairy Tales by Yei Theodora Ozaki
BigBadDare by Nicole Snow
Twelve Nights by Remy, Carole
A Bride for Two Brothers by D. W. Collins
Balustrade by Mark Henry
The Secret of the Ginger Mice by Song of the Winns
Just One Kiss by Samantha James
Burn Out by Marcia Muller