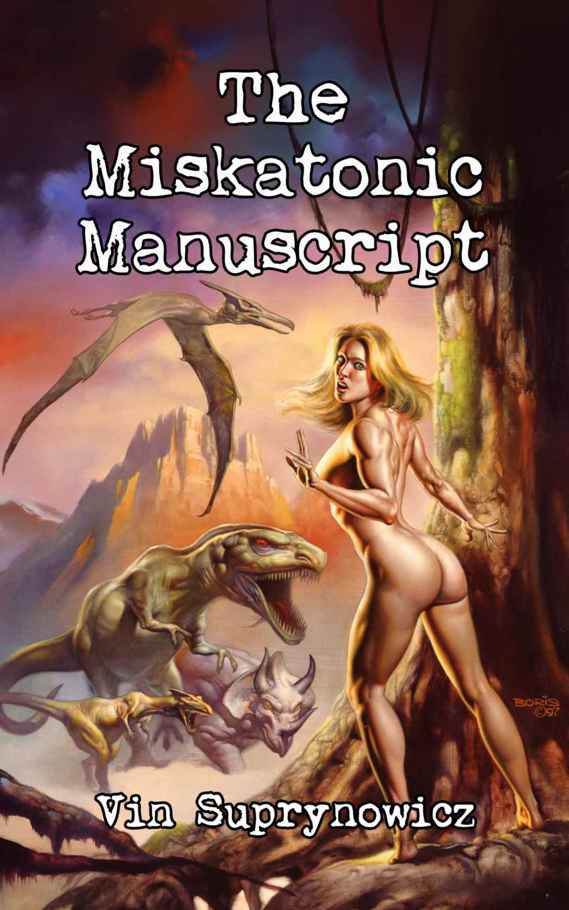 From the Case Files of
Matthew Hunter and Chantal Stevens

No part of this publication may be reproduced, stored in a retrieval system, nor transmitted, in any form or by any means, electronic, mechanical, photocopying, recording, or otherwise, without the prior permission of the author.

This book is a work of fiction. Any resemblance to actual persons or business enterprises, living or departed, or their attorneys, is unintended and weird, and thus explicable only as further evidence of atemporal quantum symmetry.

Vin’s books can be purchased from
Cat’s Curiosities

Praise for
The Miskatonic Manuscript

“The characters are well-drawn and likeable. The world of used book dealers is depicted in charming detail. Matthew and Chantal have fantastic chemistry (if you can say that about characters on a page, rather than onscreen). Their knowledge (and Vin’s) of entheogens is impressive. And all this is presented within a story that’ll keep you up late at night, turning pages long after you thought you’d turn in.

“
The Miskatonic Manuscript
is a novel of science fiction and fantasy and mystery and passion and drugs and big guns and scary creatures. It’s a story with great characters, beautiful writing, and plenty of action that moves most entertainingly along from start to finish.”

— Claire Wolfe
, author of the books
101 Things to Do ‘til the Revolution
and
Don’t Shoot the Bastards (Yet)

“Now things start to get weird — very weird — Lovecraft weird. A mysterious gadget arrives with instructions to plug it into a computer. Impossible crimes. Glowing orbs. Secret laboratories. Native American shamans. Vortices. Big hungry things with sharp teeth. Matthew and Chantal find themselves on an adventure as risky and lurid as those on the Golden Age pulp science fiction shelves of the bookstore.

“Drug warriors, law ’n order fundamentalists, prudes, and those whose consciousness has never dared broach the terrifying 'what if' there’s something more than we usually see out there may find this novel offensive or even dangerous. Libertarians, the adventurous, and lovers of a great yarn will delight in it."

For the Drug War hostages …

… and to Amy, the first reader.

Terence McKenna, on whom more extensive remarks appear in the “Notes” section at rear, was a poet as well as a visionary and explorer of the frontiers opened for us by the psychoactive plants. It was thus probably inevitable that the entrance into those precincts described at the beginning of Chapter Eighteen should echo some of the late Mr. McKenna’s imagery from such works as
The Invisible Landscape
and
The Archaic Revival
— though I could hardly hope to evoke more than a pale echo of his verbal pyrotechnics. That debt is acknowledged; interested parties are urged to seek out the original.

Nevada Hall of Fame journalist and editor A.D. Hopkins read an early draft of this work and offered many useful suggestions.

Our appreciation to Boris Vallejo for his fine cover art, to Carl Bussjaeger for his design of both the dust jacket and Marquita’s striking photo section, to Paul Woodward for the elegant typesetting and page design, and to ever helpful Bob Beers, who created and maintains the website.

No few words can properly acknowledge The Brunette’s long hours of endeavor, photographing and then poring through thousands of images to winnow down the small sampling displayed here in our section depicting Marquita Solana’s color photos of our visitors, the orbs.

And most of all, thanks and appreciation to the First Corps of Dimensionauts — those who bought the first 150 copies of
The Testament of James.
They were there at the start.

Once more unto the breach, then, dear friends, with a second adventure of Matthew Hunter and Chantal Stevens.

“Second” for our purposes, at any rate. For while we cling for now to the comforting if somewhat self-deluding tradition of “chronological order” (so that characters at least do not appear to age in reverse, like Merlin the sorcerer), surely no reader will object to our having here skipped over the adventure of the Quarrelsome Quran, given the number of fatwahs and actual assassinations flowing from that bibliographic discovery, which even today echo through (or hang their pall of smoke over) several capitals of Europe and the Muslim world.

Nor would the case offer enough unique aspects, nor current circumstances justify a separate volume to detail Matthew and Chantal’s discovery and subsequent “million-dollar auction” of Conan Doyle’s autograph manuscript of the missing Sherlock Holmes story “The Sign of the Sixteen Oyster-Shells.”

No, when the case files of Matthew Hunter and Chantal Stevens were entrusted to my care, the understanding was that I would set before the public some few of their adventures, chosen to demonstrate Matthew’s unorthodox methods, in hopes of encouraging a wider appreciation of the irrational nature of the persecution of the plant helpers whose usefulness — nay, necessity — to the survival of our culture is only now beginning to be widely understood.

My hope had been to introduce a complex and perhaps even foreign-seeming subject in digestible bites.

Thus, the first entry in the series,
The Testament of James,
was chosen not only in the belief that many might find it a “game-changer”
to consider that the crucifixion of Jesus of Nazareth may in fact have launched our modern War on Drugs, but also because the case seemed to adhere so well to the once widely touted literary “unities” of time, place, and character — a story of a few days, with a small cast of characters in a single locale. Yet I’m now advised not one modern reader in a thousand has any patience for such antiquated concerns. They apparently yearn to be thrown into the tidal race, ready or not. “Get them out of the bookstore!” I’m chided.

Very well. We now leave the nursery and the training wheels behind. Our small but loyal corps of initiates are invited to take a deep breath and pull on their helmets and kneepads, as we turn to an account with a somewhat wider scope. Whether the reader’s interest be literary, technological, pharmacological, or even the field of “current events,” I hope that all may find something invigorating in the Case of the Miskatonic Manuscript.

Once again, finally, I have in the present volume resisted urgings to lard up our tale with scholarly footnotes. The subject index and bibliography at the rear should provide plenty of opportunity for those who wish to further pursue subjects encountered in Matthew and Chantal’s ongoing adventures.

Where such references are lacking, we can only regret that “science” — excepting those anxious to “debunk” anyone observing new phenomena without benefit of a cyclotron and a million-dollar federal grant — seems to lag a bit behind, these days.

Soon enough, the sleepers will awake.

“There appears to be occurring in modern life a progressive alienation from the numinous archetypal contents of the collective unconscious, which has engendered a gradually encroaching sense of collective despair and anxiety.… Western man has lost a sense of unity with the cosmos and with the transcendent mystery within himself. Modern science has given us a picture of man as an accidental product of random evolutionary processes in a universe that is itself without purpose or meaning.… Man is regarded as leading a wholly profane existence within a wholly profane time, i.e. within history; the reality of the sacred is denied.”

“There has been an avalanche of other legal impediments to these forms of free behavior. The laws have robbed us of all the sacred materials that might be used for sacramental purposes. And robbed us of the right to explore new and unknown materials that might have potential sacred properties. The enactment of the analog substances law has made it a crime to explore any substance that might be a catalyst in opening a door to one’s own psyche. The chemical induction of a change in one’s state of consciousness is now illegal. I feel saddened that what little work is being done, in our culture at least, is underground…. It therefore cannot become part of a research process that I feel is absolutely essential for the development of humanity.… A synthesis of religion and pharmacology lies just below the surface.… This union must be explored, with the acceptance of the personal right to
believe as one chooses. There must come a parallel acknowledgment of the individual’s right to explore his own mind as he chooses.”

“The prisoner will approach the bench.”

One burly, shaved-bald bailiff took Windsor Annesley’s right elbow, and another his left, and between them the men in their gold-bedecked beige uniforms, their fat-butted German pistols swaying in their black fabric holsters, shuffled him out into the center of the courtroom, turning him to face black-robed Judge Fidelio Crustio, who loomed several feet above his head, the “bench” being an elevated platform with a false plywood front designed to resemble a huge cedar desk.

Judge Crustio’s slicked-back hair, graying at the temples, was parted higher on his head than was currently the fashion, making him look like a throwback to Prohibition days. The prisoner was dressed in a bright orange prison jump suit, his hands manacled and his ankles also chained and shackled, an excess of restraint engineered to visually symbolize his helplessness before the majesty of Judge Crustio’s court.

The sentencing of the president of the Cthulhian church, on multiple charges of drug trafficking, conspiracy to engage in drug trafficking, and even of drug “manufacture” (as though anyone but the Almighty could “manufacture” a dried peyote cactus) was supposedly “open to the public.” But this was one of the more elegant pieces of horseshit among the quite large pile which had characterized the weeks-long prosecution in Judge Crustio’s courtroom.