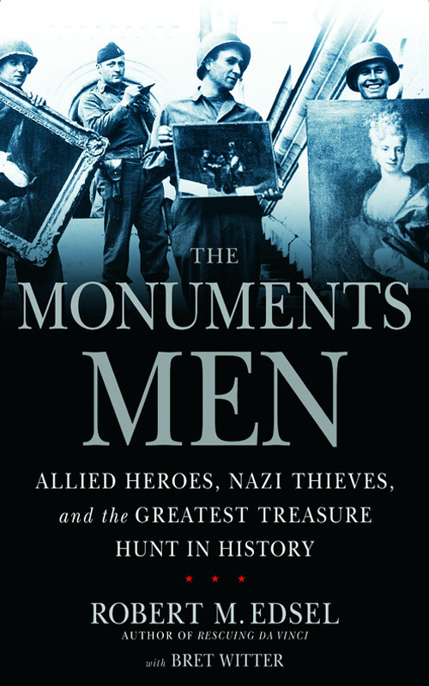 Every documented quotation in
The Monuments Men
has been referenced in the chapter notes. Most of the dialogue that appears without a chapter note has been culled from research by the authors in order to provide a sense of immediacy within a historically accurate context. While the actual words may not be direct quotes, the facts are documented.

Center Street is a division of Hachette Book Group, Inc.

The Center Street name and logo are trademarks of Hachette Book Group, Inc.

4: A Dull and Empty World

13: The Cathedral and the Masterpiece

20: The Madonna of La Gleize

25: Coming Through the Battle

27: George Stout with His Maps

31: First Army Across the Rhine

What Is Your Connection to the Story?

To my mother Norma, aunt Marilyn, and son Diego—

The memory of my father and uncle, A. Ray Edsel and Ron B. Wright, both veterans—

And the Monuments Men and women, whose heroic efforts preserved so much of the beauty we enjoy today

It used to be called plundering. But today things have become more humane. In spite of that, I intend to plunder, and to do it thoroughly.

—Reichsmarschall Hermann Göring, speaking to a conference of Reich Commissioners for the Occupied Territories and the Military Commanders, Berlin, August 6, 1942

M
ost of us are aware that World War II was the most destructive war in history. We know of the horrific loss of life; we’ve seen images of the devastated European cities. Yet how many among us have walked through a majestic museum such as the Louvre, enjoyed the solitude of a towering cathedral such as Chartres, or gazed upon a sublime painting such as Leonardo da Vinci’s
Last Supper
, and wondered, “How did so many monuments and great works of art survive this war? Who were the people that saved them?”

The major events of World War II—Pearl Harbor, D-Day, the Battle of the Bulge—have become as much a part of our collective conscience as the names of the books and films—
Band of Brothers
,
The Greatest Generation
,
Saving Private Ryan
,
Schindler’s List
—and the writers, directors, and actors—Ambrose, Brokaw, Spielberg, Hanks—who brought these epic events and the heroism of that time to life for us once again.

But what if I told you there was a major story about World War II that hasn’t been told, a significant story at the heart of the entire war effort, involving the most unlikely group of heroes you’ve never heard of? What if I told you there was a group of men on the front lines who quite literally saved the world as we know it; a group that didn’t carry machine guns or drive tanks, who weren’t official statesmen; men who not only had the vision to understand the grave threat to the greatest cultural and artistic achievements of civilization, but then joined the front lines to do something about it?

These unknown heroes were known as the “Monuments Men,” a group of soldiers who served in the Western Allied military effort from 1943 until 1951. Their initial responsibility was to mitigate combat damage, primarily to structures—churches, museums, and other important monuments. As the war progressed and the German border was breached, their focus shifted to locating movable works of art and other cultural items stolen or otherwise missing. During their occupation of Europe, Hitler and the Nazis pulled off the “greatest theft in history,” seizing and transporting more than five million cultural objects to the Third Reich. The Western Allied effort, spearheaded by the Monuments Men, thus became the “greatest treasure hunt in history,” with all the unimaginable and bizarre stories that only war can produce. It was also a race against time, for hidden in the most incredible locations, some of which have inspired modern-day popular icons like Sleeping Beauty’s Castle at Disneyland and
The Sound of Music
, were tens of thousands of the world’s greatest artistic masterpieces, many stolen by the Nazis, including priceless paintings by Leonardo da Vinci, Jan Vermeer, and Rembrandt, and sculptures by Michelangelo and Donatello. And some of the Nazi fanatics holding them were intent on making sure that if the Third Reich couldn’t have them, the rest of the world wouldn’t either.

In the end, 350 or so men and women from thirteen nations served in the Monuments, Fine Arts, and Archives section (MFAA)—a remarkably small number in a fighting force numbering into the millions. However, there were only sixty or so Monuments Men serving in Europe by the end of combat (May 8, 1945), most of whom were American or British. Monuments-laden Italy had just twenty-two Monuments officers. Within the first several months after D-Day (June 6, 1944), fewer than a dozen Monuments Men were on the ground in Normandy. Another twenty-five were gradually added until the end of hostilities, with the awesome responsibility of covering all of northern Europe. It seemed an impossible assignment.

My original plan for this book was to tell the story of the Monuments Men’s activities throughout Europe, concentrating on events from June 1944 to May 1945 through the experiences of just eight Monuments Men who served on the front lines—plus two key figures, including one woman—using their field journals, diaries, wartime reports, and most importantly their letters home to wives, children, and family members during combat. Because of the vastness of the story and my determination to faithfully convey it, the final manuscript became so lengthy that it regrettably became necessary to exclude from this book the Monuments Men’s activities in Italy. I have used northern Europe—mainly France, the Netherlands, Germany, and Austria—as a crucible for understanding the Monuments effort.

Monuments officers Deane Keller and Frederick Hartt, both American, and John Bryan Ward-Perkins, who was British, and others experienced incredible events during their difficult work in Italy. Our research unearthed insightful and moving letters home that detailed the sometimes overwhelming responsibility they faced to protect this irreplaceable cradle of civilization. I will be including these heroes’ memorable experiences in Italy, using many of their own words, in a subsequent book.

I have taken the liberty of creating dialogue for continuity, but in no instance does it concern matters of substance and in all cases it is based on extensive documentation. I have at all times tried not only to understand and communicate the facts, but also the personalities and perspectives of the people involved, as well as their perception of events at the very instant they occurred. With the advantage of hindsight, these can be quite different from our opinions; thus one of the great challenges of history. Any errors in judgment are mine alone.

At its heart,
The Monuments Men
is a personal story: a story about people. Allow me then one personal story. On November 1, 2006, I flew to Williamstown, Massachusetts, to meet and interview Monuments Man S. Lane Faison Jr., who also served in the OSS (Office of Strategic Services), precursor to the CIA (Central Intelligence Agency). Lane arrived in Germany in the summer of 1945 and promptly went to Altaussee, Austria, to assist with the interrogations of key Nazi officials who had been detained by Western Allied forces. His particular assignment was to find out as much as possible about Hitler’s art collection and his plans for the Führermuseum. After the war, Lane was an educator of art at Williams College for almost thirty years, training and sharing his gifted insights with students, both the strivers and the achievers. His professional legacy lives on through his students, in particular the leaders of many of the United States’ leading museums: Thomas Krens (Solomon R. Guggenheim Foundation, 1988–2008), James Wood (J. Paul Getty Trust, 2004–present), Michael Govan (Los Angeles County Museum of Art, 2006–present), Jack Lane (Dallas Museum of Art, 1999–2007), Earl A. “Rusty” Powell III (National Gallery of Art, Washington, D.C., 1992–present), and the legendary Kirk Varnedoe (Museum of Modern Art, 1986–2001).

Although ninety-eight years old, Lane was in seemingly good health. Still, I was warned in advance by Gordon, one of his four sons, that “Pop hasn’t been staying awake for periods much longer than thirty minutes, so don’t be disappointed if you don’t learn very much from your conversation.” And what a conversation it was, lasting almost three hours as Lane flipped through my first book,
Rescuing Da Vinci
, a photographic tribute to the work of the Monuments Men, stopping periodically to stare intently at images that seemed to transport him back in time. Over and again, as his memory was jogged, the twinkle in his eye appeared, and his arms moved enthusiastically with the telling of each amazing story until we both needed to stop. Gordon was in disbelief, a sentiment each of his brothers later echoed.

As I rose to say goodbye, I walked to the side of his recliner and extended my hand to thank him. Lane reached out and firmly clasped it with both of his hands, pulled me close, and said, “I’ve been waiting to meet you all my life.” Ten days later, a week shy of his ninety-ninth birthday, he died. It was Veterans Day.

Major Ronald Edmund Balfour, First Canadian Army.
Age in 1944: 40. Born: Oxfordshire, England. Balfour, an art history expert at Cambridge University, was what the British called a “gentleman scholar”: a bachelor dedicated to the intellectual life without ambition for accolades or position. A dedicated Protestant, he began his life as a history scholar, then switched to ecclesiastic studies. His prized possession was his immense personal library.