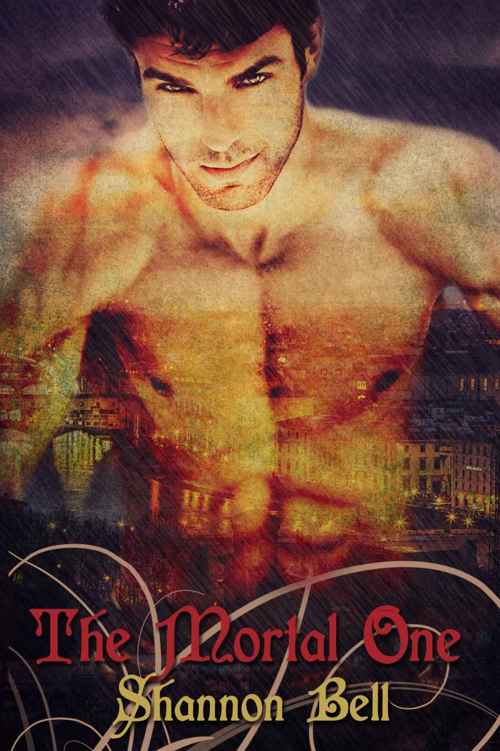 No part of this book may be reproduced or transmitted in any form or by any means, electronic or mechanical, including photocopying, recording, or by any information storage and retrieval system without the written permission of the author, except where permitted by law. The only exception is by a reviewer, who may quote short excerpts in a review.

Warning: the unauthorized reproduction or distribution of this copyrighted work is illegal. Please purchase only authorized electronic editions and do not participate in electronic piracy of copyrighted material.

This is a work of fiction. All of the characters, organizations, and events portrayed in this novel are either products of the author’s imagination or are used fictitiously. Any resemblance to actual events, locales, or persons, living or dead, is entirely coincidental.

Thank you to every paranormal romance writer that came before me, inspiring me with tales of vampires and the other things that go bump in the night.

This book is dedicated to my family, who always supported me and asked me for the first autographed copy, even before I wrote the first word.

This book would have never been possible if it weren’t for the constant nagging of my friends inside the FWA and my mom begging me for new chapters (and cursing me when I would keep her waiting too long). I’m also grateful to my critique group in Kissimmee– the book would not be what it is today without everyone’s comments and suggestions.

I also thank everyone who has ever responded to questions about Romania, Paris, and Florence on the many internet boards.

DESPITE MY CHILDHOOD fascination with vampires, I needed to get the hell out of Transylvania. As if the shitty Vampire Symposium wasn’t confirmation enough, the man in front of me who had a silver blade jutting out of a goat’s throat pretty much summed up everything.

We were off the beaten path, literally. The dark sky streaked with purple clouds matched my mood. I silently begged for the night to come quickly to a close so the train could collect me the next morning. I’d take whatever the train station had – the earlier the better.

“Do you want to drink?” The tall man with deep set eyes held a goblet under the dying goat’s neck that collected thick, red blood.

I shuddered in horror. “That is so
not
what I had in mind when you invited me out here, Alin.”

“Stop being such a girl, Dylan. You wanted to know how vampires lived, so here it is.”

Let me back up for a moment. I met Alin at the hotel bar the day the symposium ended. He appealed to all of the dark senses I had about vampires and told me that he was one. In foolish naivety, I fell for it. He offered to show me the other side of how he lived and now here I was, miles away from the gothic churches with their ornate steeples, the gas-burning street lamps of Brasov, and any civilization whatsoever. My life had been filled with idiotic choices over the years, but this one made it to the very top of the list.

My attention was split between Alin and the other guy with him. I didn’t catch his name and I wasn’t going to bother asking at this point. It wasn’t like we were going to be best friends anytime in the near future.

“She thought you meant real vampires, Alin,” the shorter, pock-faced man commented. “Look at her face.”

I stood tall while pulling at my reddish brown pony tail and wishing like hell my legs would carry me as fast as I wanted to run. Instead, my knees locked in place and my eyes met his. “I’m not drinking that. It’s been a long night. Can you just take me back to my hotel already?”

Alin let out a rich, hearty laugh, which told me that he didn’t care about me and thought this whole stunt was very amusing. It shook me to my core and pissed me off each second he continued. “Just as soon as we’re done here. There’s no sense wasting good goat’s blood because you’re disappointed that real vampires don’t exist.”

“Is the blood really necessary?”

The two men looked at each other as if they considered stopping for a moment. Then they both responded with a simultaneous, “Yes.”

Alin decided to elaborate. “The goat’s blood symbolizes life. As vampires, we must take life in order to enjoy life. Just be thankful that it’s a goat each month we sacrifice instead of a human.”

My blood was rising an extra degree as it coursed through my flushed cheeks. My emotions were starting to betray me but refused to let some fake vampire cult make me cry. I am twenty-eight years old, damn it – I am
not
going to cry.

“Dylan, you had to know that I wasn’t the kind of vampire you thought.”

“The kissing…,” he trailed off.

Pock Face chose now to chime in. “Alin, you didn’t tell me that you kissed her.”

“Shut up,” we both demanded in unison.

My avid reading of vampire literature over the years taught me three truths that always remained the same. One, vampires only came out at night. Two, they had fangs. Three, they were cold to the touch.

I should have known better with Alin because he only met one of the three truths: I only saw him at night. The kisses we stole in the booth in the back of the hotel bar told me that he was very warm to the touch. I used enough tongue to know he didn’t have any fangs, too, but I had rationalized. Maybe he had fed recently enough to give him the warmth. He also could have had retractable fangs for all I knew.

My life seemed to be crumbling around me back in Florida. Something had to change. Nothing was keeping me in the States and I could finally pursue other interests. The symposium was
supposed
to be the catapult that sent my life into some sort of meaningful direction.

“You and I aren’t that different, you know,” Alin spoke.

My gaze narrowed on him. “What do you mean?”

“We both seek the truth. I’m giving you the vampires you wanted. It took me a long time to realize they don’t exist in the form you were hoping for. I was a member of the Transylvanian Society for years. Truth seekers are out there, but most of them give up at some point or another.”

My lips thinned as I contemplated his words. I didn’t want to give up yet I knew that most of what he said was right.

“Did you get anything out of the symposium that was actually helpful?”

“There you go,” he remarked, satisfied in his revelations.

Pock Face straddled the goat and held its thrashing body in place so Alin could get the remaining blood from its throat.

The men drank the thick, red fluid steadily for the next few minutes before they wiped their lips, laughed, and carried on. The goat collapsed in a heap with a final wheeze. Pock Face kicked it and Alin made a gesture towards me that let me know they were finally ready to take me back to my hotel.

I sat in silence and cursed at myself the whole way back while mentally devising my travel plans. My original itinerary had me scheduled here until Friday, but it was only Tuesday night and I already wanted to leave. There were trains that would get me out of here tomorrow morning if only I could manage to get on one of them.

“You were at the Vampire Symposium this past weekend, yes?” A female voice with a thick Eastern European accent caught me off guard as I unloaded my luggage onto the train.

I nodded and took a seat. “Yeah, though I wish I hadn’t wasted my money.”

She nodded and reached across the aisle with her arm extended. “I am Eva.”

“I come every year and hope each time that it will get better. Is this your first year?”

“Yep, and my last. I’ve been a member of the Transylvanian Society for Dracula since high school. I’ve wanted to go to the conference each time I saw their notices, but school and life kept getting in the way and it’s expensive to fly all the way out here.”

She fumbled through her backpack and took out a journal, which she set down next to her. “I can imagine. It is hard enough for me to gather up the funds and I am only a country away. Where in the US are you from?” Her long fingers combed through the short blond spikes of her hair as she waited for my response.

“Florida,” I said, leaning back and getting comfortable. It was a long ride and I was just glad to be out of Romania.

I had loved everything about it when I first arrived to Romania. The train ride from Bucharest to Brasov was astonishing. The green meadows with the alluring Carpathians in the background made me glad that I got away from my job as a restaurant manager for a little while. My best friend Jen was pissed that I was leaving her for three weeks but she’d get over it.

I nodded. “Yeah. This trip was much needed. My passport has never been stamped before so I figured it was time to change all that. I’m headed to Paris and then Florence for a little while longer before I go back home.”

“Wonderful! I am just outside of Budapest and never seem to travel. My boyfriend gives me a hard time when I come here every year.” She was fumbling with her journal again but I didn’t bother to ask about it. “So did you see any vampires?” She asked, now clutching the leather binding.

My mouth gaped open for a moment as she so leisurely asked the question. “Excuse me?”

“What? I see them from time to time. Did you not meet Alin and his crew?”

I laughed and wanted to die all at the same time. At least I wasn’t the only one who had ever been duped by them.

“Oh yeah. We became great friends,” I said sarcastically. “Do you know them personally?”

She handed her journal to me where she had several newspaper clippings about the supposed vampire cult they had created in Brasov. “It is a popular cult they run. Every year at the symposium they get a few new recruits. You did not want to join?”

“Absolutely not. I’ve never wanted to leave a country so bad in all of my life.”

Eva and I talked about the Vampire Symposium for a while, both wishing we hadn’t wasted our money. We exchanged email addresses and promised to keep in touch. I switched trains for Paris, which was just fifteen hours away, once she got off in Budapest. Half asleep, my head leaned against the glass window and my breath formed clouds on the glass in front of me. My eyes had become heavy and the last thing I remembered seeing was the bright, yellow flowers scattering the meadows of Switzerland, a sure sign that spring was here.