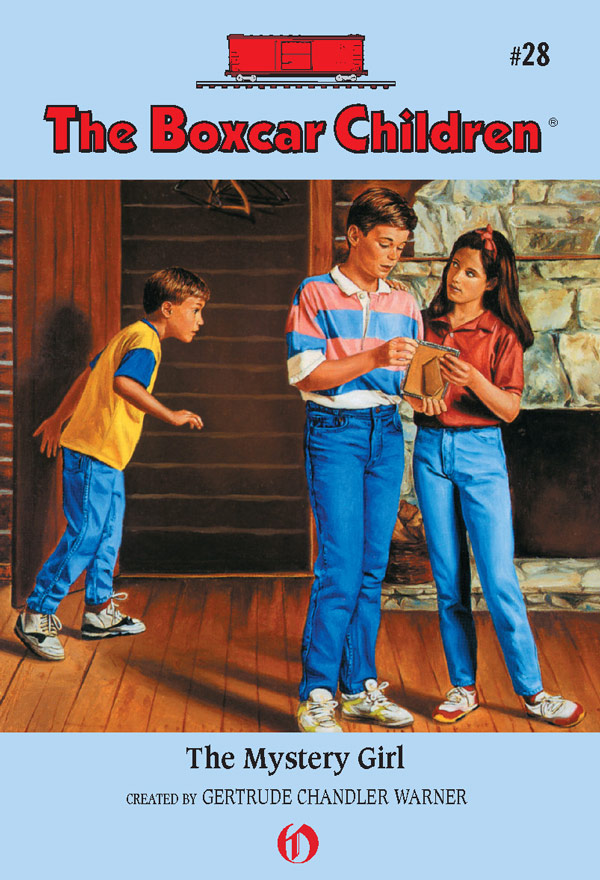 I
t was summer vacation, and the Alden children, Henry, Jessie, Violet, and Benny, had gone to stay for a week with their Aunt Jane in Elmford. On the first morning of their visit, they got up early. They had decided to surprise Aunt Jane by making a special breakfast.

“I vote for pancakes,” six-year-old Benny whispered as they all went quietly downstairs.

“That sounds good to me,” said Henry, who was fourteen. “Pancakes with that special maple syrup that Aunt Jane gets at Jerry Taylor's general store.”

“And some fresh strawberries, too,” twelve-year-old Jessie said. “I saw some in the refrigerator last night when we had a snack. Benny, you can wash the strawberries, and I'll make the pancake batter.”

“And I'll pick some flowers for it,” said Violet, who was ten. “Then we can all go wake Aunt Jane.”

But when the Aldens went into the kitchen, Aunt Jane was already there, sitting at the table.

Aunt Jane put her glass of orange juice down and smiled. “It is early, Benny, but I'm wide awake.”

“Are you sure?” Benny asked. “Maybe if you got back in bed, you'd feel sleepy again.”

Jessie laughed. “We'll have to wait for another time, Benny.” She kissed Aunt Jane good morning. “We were going to surprise you by having breakfast ready before you got up,” she explained.

“Pancakes and maple syrup and strawberries,” Benny said. “It was going to be so good.”

Aunt Jane shook her head. “It sounds delicious, but I'm afraid I can't take the time for a pancake breakfast this morning.”

“What do you have to do?” Henry asked. He took some juice glasses from the cabinet for his brother and sisters. “Can we help?”

“I'm sure you can,” Aunt Jane said. “While Andy is away on his business trip, I'm going to make some new curtains for the den.” Andy Bean was Aunt Jane's husband. “It's his favorite room in the house and I just finished painting it. But the curtains are old and faded, and they look terrible.”

“You're working on a surprise of your own,” Violet said, as she poured orange juice for everyone.

“That's right,” Aunt Jane agreed, laughing. “I thought I'd drive out to Taylor's General Store this morning. He sells everything, including fabric. Would you all like to come with me and help me pick it out?”

“Yes!” Benny took a big gulp of his juice. “We've never been there. I would really like to see it!”

Henry rumpled Benny's hair. “I bet you'd like to see all the jars of penny candy Aunt Jane told you about.”

“You're right, I would,” Henry laughed.

“Because that's Grandfather's favorite candy,” Violet said. “We can take him some when we go back to Greenfield.”

The Aldens' parents were dead, and they lived with their grandfather, James Alden. Before that, they had run away and lived by themselves, in an old, abandoned boxcar, which they had turned into a home. They had been afraid of their grandfather because they thought he was mean and wouldn't like them. Once they met him, they found out how kind he was, and now they loved him very much.

“We should take Watch something, too,”Benny said. The Aldens' dog, Watch, had stayed behind in Greenfield with their grandfather. “Does Mr. Taylor's store have dog biscuits, Aunt Jane?”

“I'm not sure, Benny,” Aunt Jane said. “But he does have dog collars.”

“That's perfect,” Jessie said. “We'll get candy for Grandfather and a new collar for Watch. And here's another reason we should go with you, Aunt Jane.” She held up an almost-empty bottle. “There's not enough of Jerry Taylor's maple syrup left for even one pancake.”

Benny laughed. “It's a good thing you got up before us, Aunt Jane. Pancakes without syrup would have been a real surprise!”

After a fast breakfast of cereal with strawberries, everyone got in the car. Jerry's general store was several miles out of town. As they were driving, Jessie pointed out the window at a long, low building with lots of glass and a big fountain in front of it. “What's that building?” she asked. “It wasn't here the last time we came to visit you.”

“That's the Elmford Shopping Center,” Aunt Jane said. “It opened just a few days ago. It has several different stores in it including a grocery store, a department store that sells just about everything except food, and two restaurants.”

“It looked so modern and fancy,” Jessie said.

“Have you gone shopping there, Aunt Jane?” Violet asked.

“Not yet,” Aunt Jane said. “Some of my friends have told me it's very nice, so I'll probably try it one of these days.”

Soon the Elmford Shopping Center was behind them, and after a few more miles of driving, they arrived at Taylor's General Store. It was a brown wooden building with a long porch across the front. There was an old-fashioned glider on the porch, and two wooden tubs with petunias and geraniums stood beside the front door. 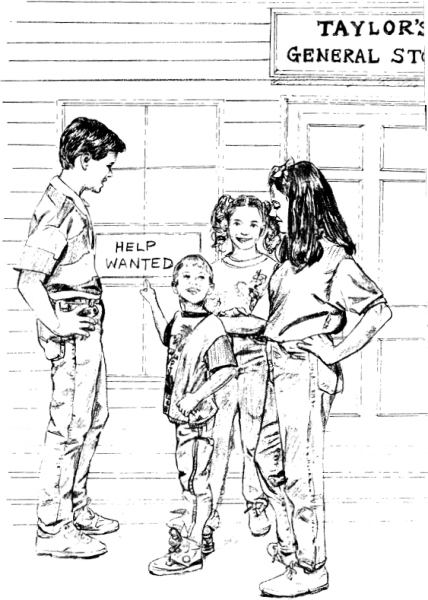 “This is such a pretty place,” Violet said as they all got out of the car. Violet always appreciated the way things looked.

“Do you see those cabins?” Aunt Jane asked, pointing to a group of small cabins near the store. “Jerry lives in one of them, and he rents the others to people who are on vacation.”

“Look!” Benny pointed to a white sign in one of the store's front windows. “ âHelp Wanted,' ” he read.

“I didn't know Jerry needed help,” Aunt Jane said. “I was here two weeks ago and the sign wasn't there then. Jerry always has two people working for him. I wonder what happened to them.”

“We'll find out soon enough,” Benny said. He ran ahead of the others and hopped up the steps. As he jumped onto the porch, a tall woman came out of the store. Benny almost bumped into her, but he stopped just in time.

“Excuse me,” Benny said, smiling up at the woman.

But the woman just frowned at him and hurried down the steps, past Aunt Jane and the others.

“That woman didn't buy a thing,” Aunt Jane said, as she and the others joined Benny on the porch. “I've never known anyone to leave Jerry's store empty-handed.”

“Maybe she wanted to run in and ask directions,” Jessie said. “She looked like she was in a hurry.”

“But how could she not buy any penny candy?” Benny asked.

Henry laughed. “Maybe she just doesn't like it, Benny.”

Just then, they all heard a girl's voice cry, “Oh, no! Look out!” Then there was a clanging, rattling noise from inside the store.

A
unt Jane and the children ran into the store. They saw a pile of shiny pots and pans lying on the floor. A woman was standing near the long wooden counter, and a young girl with short red hair was picking up the pans. Violet said, “Let's go help.”

The Aldens quickly picked up the rest of the pans and put them on the counter. “Oh, thank you,” said the red-haired girl. “I don't know what happened. I was reaching for a pan and suddenly they all came tumbling off the shelf. I'm just glad you didn't get hit on the head,” she said to the woman who was standing by the counter.

“Oh, yes,” the girl said. “Mr. Taylor sells the best.” She held up a deep saucepan with a wooden handle. “You see? Not even a scratch.”

The woman took the pan and looked it over. The girl smiled at the Aldens and Aunt Jane. “Mr. Taylor is on the phone in his office right now,” she said. “But I'll be with you in just a moment.”

“Please don't hurry,” Aunt Jane told her. “I need to take my time looking at the fabric.”

Aunt Jane and Violet walked over to look at the bolts of cloth on one side of the store.

On the other side of the store there were boxes of nuts and bolts and nails, gardening and building tools, and camping equipment. “This is a great place!” Henry said to Jessie. He walked over to look at the building tools.

“Aunt Jane was right,” Jessie said. “This store has everything.” She went to look at the shelves of sweatshirts, jeans, thick socks, and leather belts.

Near the counter was a table with fresh fruit and vegetables. There were also two big barrels, one with peanuts in the shell, the other with walnuts. On the shelves behind the counter were jars of maple syrup and honey and jam. On the counter itself was a long row of big glass jars filled with bright-colored candy. Benny stayed close to the counter and looked at the candy. He could hear the woman and the red-haired girl talking about the pans.

“This is a nice one,” the woman said.

“It sure is,” said the red-haired girl enthusiastically. “You will be able to make great scrambled eggs in it.”

The woman laughed a little. “My dear,” she said. “This is a saucepan. I might use it to
boil
eggs, but I could never scramble them in it.”

The red-haired girl blushed. Then she laughed, too. “You are right,” she said. “I guess I got mixed up.”

Just then, a man came out of a room at the back of the store. He was middle-aged, with thick brown hair and bright blue eyes, and he looked worried.

Aunt Jane saw him and smiled. “Hello, Jerry,” she said.

Jerry Taylor stopped looking worried and smiled, too. “Hello, Jane,” he said, walking over to her and Violet. “I'm glad to see you.” “It's nice to see you, too,” Aunt Jane said. “I want you to meet my nieces and nephews, who are visiting me.”

By this time, Benny, Jessie, and Henry had joined them. Aunt Jane introduced them to Jerry Taylor, and they all shook hands.

“Your Aunt Jane has told me a lot about you and I'm glad to meet you,” Mr. Taylor said to the children. “I'm afraid I can't talk very long right now, though. I want to stay by my phone in the office. I'm hoping to get more calls about the job.”

“We saw the help wanted sign in your window,” Aunt Jane said. “What happened to Sam and Dick, who used to work here?”

“Sam and his family moved away,” Jerry said. “But Dick quit and went to work at the shopping center.”

“That new one we passed on the way here?” Jessie asked.

Jerry nodded. He was looking worried again. “There's nothing wrong with a shopping center, of course,” he said. “But it's fancy and modern, and my store is pretty old-fashioned. I can't help worrying that the Elmford Shopping Center will hurt my business.”

“I don't believe it,” Benny declared. “This is the
best
store I've ever seen!”

Jerry smiled. “I hope all my regular customers agree with you, Benny.”

“I'm sure they will,” Jessie said reassuringly.

Warrior Everlasting by Knight, Wendy
The Undead That Saved Christmas Vol. 2 by Lyle Perez-Tinics, ed.
Dead of Winter by Elizabeth Corley
Dead & Alive (Short Story): Outbreak by Smith, I.J.
Duncton Found by William Horwood
Thicker Than Water by Allen, Takerra
Of Monsters and Madness by Jessica Verday
The Laughing Policeman by Sjöwall, Maj, Wahlöö, Per
Being with Her by Amanda Lynn
Dagger - The Light at the End of the World by Walt Popester