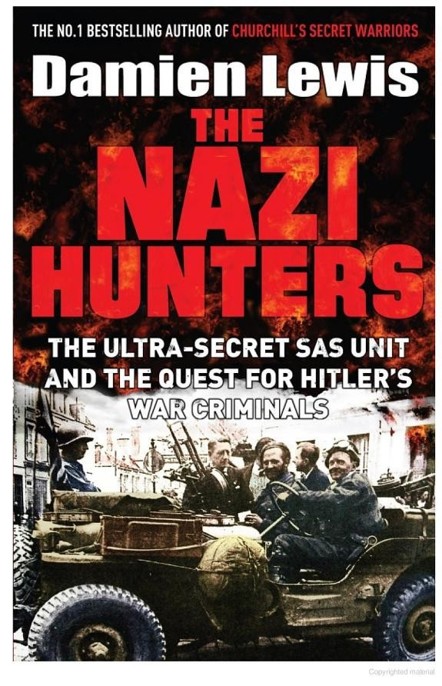 First published in Great Britain in 2015 by

The moral right of Damien Lewis to be

identified as the author of this work has been

asserted in accordance with the Copyright,

may be reproduced or transmitted in any form

or by any means, electronic or mechanical,

including photocopy, recording, or any

without permission in writing from the publisher.

A CIP catalogue record for this book is available

from the British Library

(Plates numbered in order of appearance)

Every effort has been made to contact copyright holders. However, the publishers will be glad to rectify in future editions any inadvertent omissions brought to their attention.

Quercus Editions Ltd hereby exclude all liability to the extent permitted by law for any errors or omissions in this book and for any loss, damage or expense (whether direct or indirect) suffered by a third party relying on any information contained in this book.

For those who never returned.

In researching this book I was able to speak to a number of people in the UK, the USA, France and elsewhere, and to rely upon the recollections and assistance of many. My very special thanks and gratitude are extended to them all, and my apologies to those I have inadvertently forgotten to mention. I am especially grateful to those former SAS members from the Second World War who shared with me their recollections, and to those former French Resistance members from the Vosges who did the same. In no particular order I wish to thank the following: Jack Mann (UK); Chris Boulton (UK); Michael Jarrett (UK); Philip Eyers (France); Tony McKenny (Australia); David Henry (Australia); Tean Roberts (UK); Simon Fowler (UK); Maxene Lemaire (France); Sim Smiley (USA); Paul Sherratt and Anne Sherratt (UK); David Lewis (France); Eric Chauffele (France); Madeleine Fays (France).

My gratitude as always to my literary agent, Annabel Merullo, and film agent, Luke Speed, for helping make this book such a success, and to all at my esteemed publishers, Quercus, for same, including Charlotte Fry, Ben Brock and Fiona Murphy. I’d also like to thank Josh Varney.

My editor, Richard Milner, deserves very special mention for deciding to commission this book based upon a back-of-the-envelope sketch about what the story entailed. Such spirited and brave decision-making is all too rare in the world of publishing today, and is, I hope, rewarded by the pages that follow.

A special mention must also go to Peter Message, an extremely gifted schoolboy and budding Second World War historian who read and commented with aplomb on this book at early manuscript stage.

One other individual who cannot be named – a former SAS soldier of some repute – deserves my very special gratitude for bringing this story to my attention in the first place and for convincing me that it really did need to be told. Thank you.

I am also indebted to those authors who have previously written about some of the topics dealt with in the pages of this book. In alphabetical order they are: Keith E. Bonn (
When the Odds Were Even
); Colin Burbidge (
Preserving the Flame
); Roger Ford (
Fire from the Forest
and
Steel from the Sky
); John Hislop (
Anything but a Soldier
); Tim Jones (
SAS: The First Secret Wars
); Anthony Kemp (
The Secret Hunters
); Paul McCue (
SAS Operation Bullbasket
); Gavin Mortimer (
The SAS in World War Two
); Christopher Sykes (
Four Studies in Loyalty
).

And of course, thanks as always to Eva, David, Damien Jnr and Sianna, for not resenting Dad spending so much of his time locked away . . . again . . . writing . . .  again.

There are sadly few, if any, survivors of the Second World War Special Forces operations depicted in these pages, or from the French Resistance (the Maquis), or of the Nazi hunters who operated immediately after the war. Throughout the period of the research for and the writing of this book I have endeavoured to contact as many of these individuals as possible, in addition to the surviving family members of those who have passed away. If there are further witnesses to the stories told here who are inclined to come forward, please do get in touch with me, as I may be able to include further recollections on the operations portrayed in this book in future editions.

The time spent by Allied servicemen and women as Special Operations Executive (SOE) agents, Special Forces operators, and working with the Resistance was often deeply traumatic, and many chose to take their stories to their graves – especially those who ended up captives of the enemy. Memories tend to differ, and apparently none more so than those concerning operations behind enemy lines. The few written accounts that do exist of such missions also tend to diverge in their detail and timescale, and locations and chronologies are often contradictory. That being said, I have done my best to provide a comprehensible sense of time and place in the story as written.

Where various accounts of a mission appear to be particularly confused, the methodology I have used to reconstruct where, when and how events took place is the ‘most likely’ scenario. If two or more testimonies or sources point to a particular time or place or sequence of events, I have opted to use that account as most likely. Where necessary I have recreated small sections of dialogue to aid the story’s flow.

The above notwithstanding, any mistakes herein are entirely of my own making, and I would be happy to correct them in future editions. Likewise, while I have endeavoured to locate the copyright holders of the photos, sketches and other images used in this book, this has not always been straightforward or easy. Again, I would be happy to correct any errors or omissions in future editions.

The suggestion for this book came from out of the blue.

I happened to meet up with a Special Air Service (SAS) soldier who had risen to some degree of rank and influence at ‘the Regiment’, as it is known. That soldier – I’ll call him ‘Steve’; he asked for his real name not to be used, as is the wont of SAS operators – and I had become friends over the writing of several books.

I had just published
Churchill’s Secret Warriors
, the story of the wild Danish Viking warrior Anders Lassen – the only member of the British SAS ever to win the Victoria Cross – and his band of Special Forces desperadoes, those who had taken Churchill’s 1940 edict to ‘set Europe aflame’ and made it a reality, spreading chaos and terror behind the German lines and breaking just about every rule of war.