The New Dare to Discipline 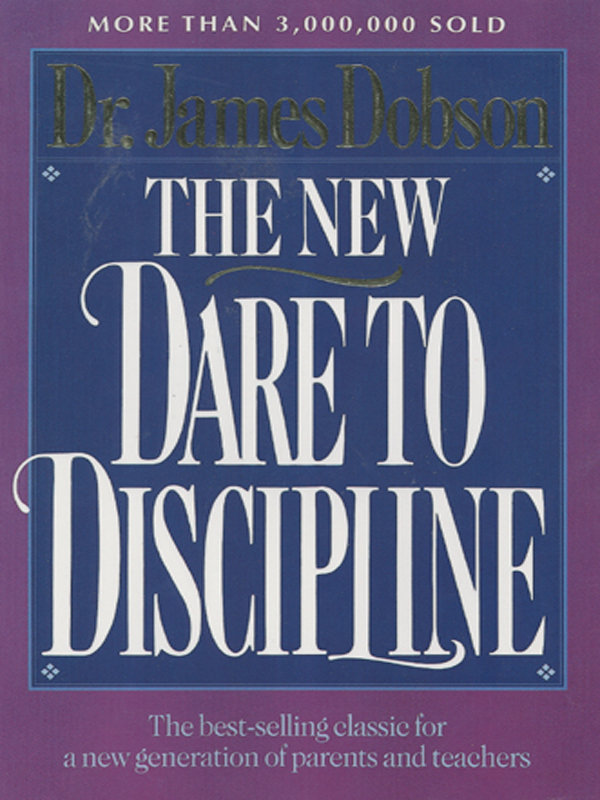 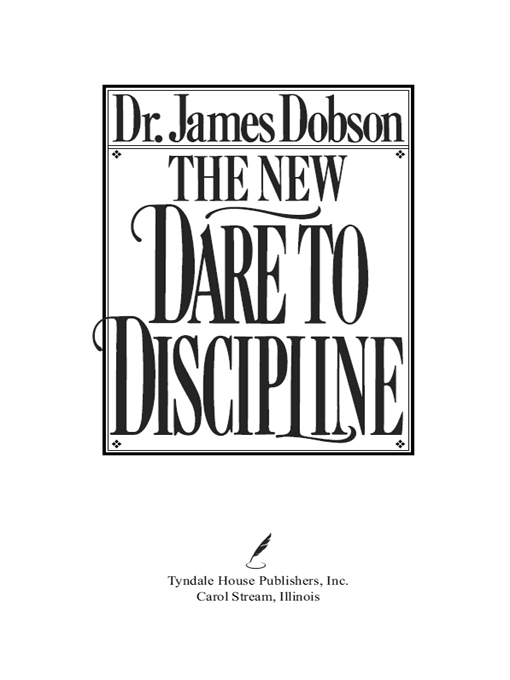 The New Dare to Discipline

This book is a completely revised edition of Dare to Discipline, first published in 1970 by Tyndale House Publishers, Inc.

Scripture quotations marked RSV are from the Holy Bible, Revised Standard Version, copyright © 1946,1952,1971 by the Division of Christian Education of the National Council of the Churches of Christ in the United States of America, and are used by permission. All rights reserved.

To Danae, Ryan, and their mother Shirley, I affectionately dedicate the pages of this book and the remaining years of my life.

Common Sense and Your Child

The Barriers to Learning, Part 1

The Barriers to Learning, Part 2

A Moment for Mom

A Quick Survey of Drugs and

T
his is a book about children and those who love them. The first edition was written in the early 1970s when I was a professor of pediatrics at the University of Southern California School of Medicine. Our own children were still pre-schoolers, which made it risky to offer advice about parenting techniques. That’s like a coach bragging in the first quarter about how he expects to win the game. Nevertheless, I had seen enough academically and professionally to have developed some firm convictions about how children should be raised and what they needed from their parents.

More than twenty years and 2 million copies of
Dare to
Discipline
have come and gone since I first sat down to write. That passage of time has broadened my horizon and, hopefully, sharpened my vision. I’ve worked with thousands of families and I’ve considered the child-rearing views of many authorities and colleagues. My kids have paddled through adolescence and have established homes of their own. Thus, it is a special privilege for me to roll back the clock now and revisit the themes with which I first grappled so many years ago.

One might expect my views of child development and parenting to have evolved significantly within the intervening years. Such is not the case. Admittedly, the social backdrop for the original
Dare to Discipline
has changed dramatically, which is why this book needed to be revised and expanded. The student revolution that raged through the late sixties and early seventies has subsided. Woodstock and the Viet Nam War are distant memories, and university campuses are again quieter and less rebellious. But children haven’t changed, nor will they ever. I’m even more convinced now that the principles of good parenting are eternal, having originated with the Creator of families. The inspired concepts in Scripture have been handed down generation after generation and are just as valid for the twenty-first century as they were for our ancestors. Unfortunately, many of today’s parents have never heard those time-honored ideas and have no clue about what they’re trying to accomplish at home.

I’ll never forget a mother in that predicament who asked for my help in handling her defiant three-year-old daughter, Sandy. She realized that her tiny little girl had hopelessly beaten her in a contest of wills, and the child had become a tyrant and a dictator. On the afternoon prior to our conversation, an incident occurred which was typical of Sandy’s way of doing business. The mother (I’ll call her Mrs. Nichols) put the youngster down for a nap, but knew it was unlikely she would stay in bed. Sandy was not accustomed to doing anything she didn’t fancy, and naptime was not on her list of fun things to do in the afternoon.

On this occasion, however, the child was more interested in antagonizing her mom than in merely having her own way. Sandy began to scream. She yelled loudly enough to upset the whole neighborhood, fraying Mrs. Nichols’ jangled nerves. Then she tearfully demanded various things, including a glass of water.

At first Mrs. Nichols refused to comply with the orders, but she surrendered when Sandy’s screaming again reached a peak of intensity. As the glass of water was delivered, the mischievous child pushed it aside, refusing to drink because her mother had not brought it soon enough. Mrs. Nichols stood offering the water for a few minutes, then said she would take it back to the kitchen if Sandy did not drink by the time she counted to five.

Sandy set her jaw and waited through the count: “three . . . four . . . five!” As Mrs. Nichols grasped the glass and walked toward the kitchen, the child screamed for the water. Sandy dangled her harassed mom back and forth like a yo-yo until she tired of the sport.

Mrs. Nichols and her little daughter are among the many casualties of an unworkable, illogical philosophy of child management which has long dominated the literature on this subject. This mother had read that a child will eventually respond to reason and forbearance, ruling out the need for firm leadership. She had been told to encourage the child’s rebellion because it offered a valuable release of hostility. She attempted to implement the recommendations of the experts who suggested that she verbalize the child’s feelings in a moment of conflict: “You want the water but you’re angry because I brought it too late” . . . “You don’t want me to take the water back to the kitchen” . . . “You don’t like me because I make you take naps.” She had also been taught that conflicts between parent and child were to be perceived as misunderstandings or differences in viewpoint.

Unfortunately, Mrs. Nichols and her advisors were wrong! She and her child were involved in no simple difference of opinion: she was being challenged, mocked, and defied by her daughter. No heart-to-heart talk would resolve this nose-to-nose confrontation, because the real issue was totally unrelated to water or the nap or other aspects of the particular circumstances. The actual meaning behind this conflict and a hundred others was simply this: Sandy was brazenly rejecting the authority of her mother. The way Mrs. Nichols handled these confrontations would determine the nature of their future relationship, especially during the adolescent years.

Much has been written about the dangers of harsh, oppressive, unloving discipline; these warnings are valid and should be heeded. However, the consequences of oppressive discipline have been cited as justification for the abdication of leadership. That is foolish. There are times when a strong-willed child will clench his little fists and dare his parents to accept his challenges. He is not motivated by frustration or inner hostility, as it is often supposed. He merely wants to know where the boundaries lie and who’s available to enforce them.

Many well-meaning specialists have waved the banner of tolerance, but offered no solution for defiance. They have stressed the importance of parental understanding of the child, and I concur. But we need to teach children that they have a few things to learn about their parents, too!

Mrs. Nichols and all her contemporaries need to know how to set limits, and what to do when defiant behavior occurs. This disciplinary activity must take place within the framework of love and affection, which is often difficult for parents who view these roles as contradictory.
Dare to Discipline
is addressed, in part, to this vital aspect of raising healthy, respectful, happy children.

The term “discipline” is not limited to the context of confrontation, and neither is this book. Children also need to be taught
self
-discipline and responsible behavior. They need assistance in learning how to handle the challenges and obligations of living. They must learn the art of self-control. They should be equipped with the personal strength needed to meet the demands imposed on them by their school, peer group, and later adult responsibilities.

There are those who believe these characteristics cannot be taught—that the best we can do is send children down the path of least resistance, sweeping aside the hurdles during their formative years. The advocates of this laissez-faire phi losophy would recommend that youngsters be allowed to fail in school if they choose . . . or maintain their bedrooms like proverbial pigpens . . . or let their puppies go hungry.

I reject this notion and have accumulated considerable evidence to refute it. Children thrive best in an atmosphere of genuine love, undergirded by reasonable, consistent discipline. In a day of widespread drug usage, immorality, sexually transmitted diseases, vandalism, and violence, we must not depend on hope and luck to fashion the critical attitudes we value in our children. Permissiveness has not simply failed as an approach to child rearing. It’s been a disaster for those who have tried it.

When properly applied, loving discipline works! It stimulates tender affection, made possible by
mutual
respect between a parent and a child. It bridges the gap which otherwise separates family members who should love and trust each other. It allows the God of our ancestors to be introduced to our beloved children. It permits teachers to do the kind of job in classrooms for which they are commissioned. It encourages a child to respect other people and live as a responsible, constructive citizen.

As might be expected, there is a price tag on these benefits: they require courage, consistency, conviction, diligence, and enthusiastic effort. In short, one must
dare to discipline
in an environment of unmitigated love. We’ll discuss the methods by which that can be accomplished in subsequent chapters.