The Night Fire: A Ballard and Bosch thriller (Harry Bosch 22) 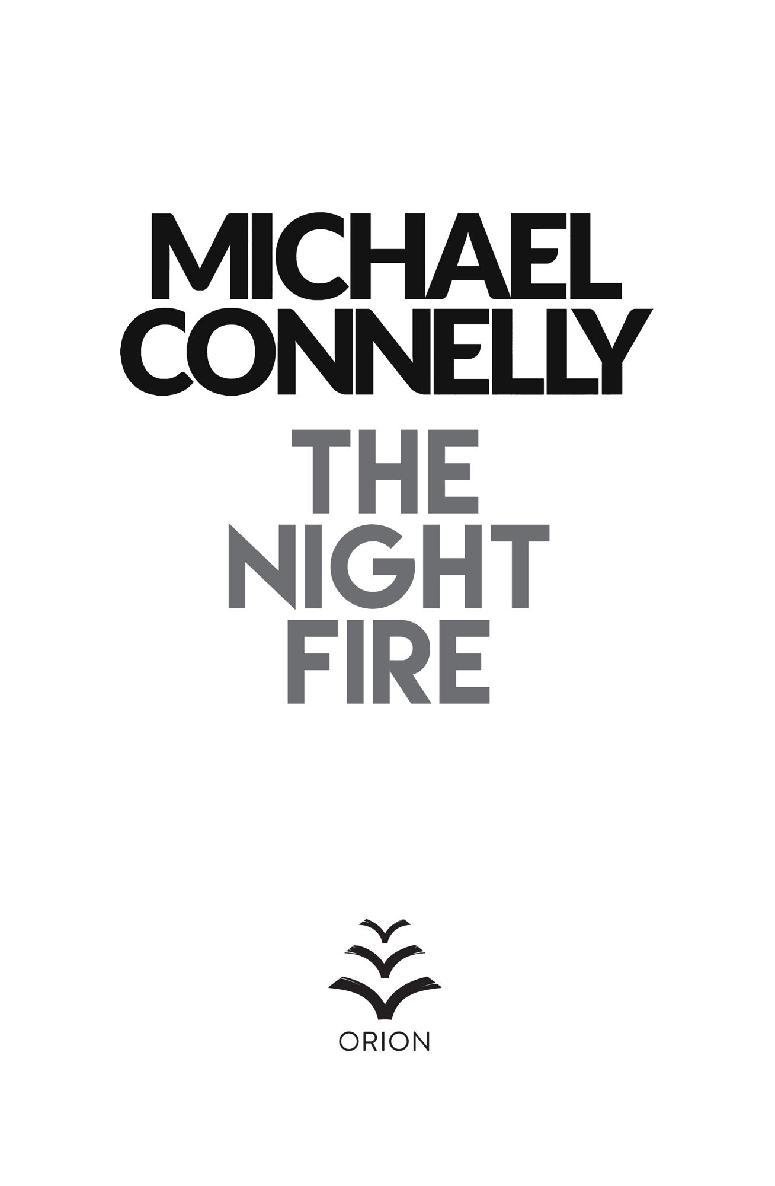 Bosch arrived late and had to park on a cemetery lane far from the grave site. Careful not to step on anybody’s grave, he limped through two memorial sections, his cane sinking into the soft ground, until he saw the gathering for John Jack Thompson. It was standing room only around the old detective’s grave site and Bosch knew that wouldn’t work with his knee six weeks post-op. He retreated to the nearby Garden of Legends section and sat on a concrete bench that was part of Tyrone Power’s tomb. He assumed it was okay since it was clearly a bench. He remembered his mother taking him to see Power in the movies when he was a kid. Old stuff they would run in the revival theaters on Beverly. He remembered the handsome actor as Zorro and as the accused American in
Witness for the Prosecution.
He had died on the job, suffering a heart attack while filming a dueling scene in Spain. Bosch had always thought it wasn’t a bad way to go—doing what you loved.

The service for Thompson lasted a half hour. Bosch was too far away to hear what was said but he could guess. John Jack—he was always called that—was a good man who gave forty years of service to the Los Angeles Police Department in uniform and as a detective. He put many bad people away and taught generations of detectives how to do the same.

One of them was Bosch—paired with the legend as a newly minted homicide detective in Hollywood Division more than three decades earlier. Among other things, John Jack had taught Bosch how to read the tells of a liar in an interrogation room. John Jack always knew when somebody was lying. He once told Bosch it took a liar to know a liar but never explained how he had come by that piece of wisdom.

Their pairing had lasted only two years because Bosch trained well and John Jack was needed to break in the next new homicide man, but the mentor and student had stayed in touch through the years. Bosch spoke at Thompson’s retirement party, recounting the time they were working a murder case and John Jack pulled over a bakery delivery truck when he saw it turn right at a red light without first coming to a complete stop. Bosch questioned why they had interrupted their search for a murder suspect for a minor traffic infraction and John Jack said it was because he and his wife, Margaret, were having company for dinner that night and he needed to bring home a dessert. He got out of their city-ride, approached the truck, and badged the driver. He told him he had just committed a two-pie traffic offense. But being a fair man, John Jack cut a deal for one cherry pie and came back to the city car with that night’s dessert.

Those kinds of stories and the legend of John Jack Thompson had dimmed in the twenty years since his retirement, but the gathering around his grave was thick and Bosch recognized many of the men and women he had worked with during his own time with an LAPD badge. He suspected the reception at John Jack’s house after the service was going to be equally crowded and might last into the night.

Bosch had been to too many funerals of retired detectives to count. His generation was losing the war of attrition. This one was highend, though. It featured the official LAPD honor guard and pipers. That was a nod to John Jack’s former standing in the department. “Amazing Grace” echoed mournfully across the cemetery and over the wall that divided it from Paramount Studios.

After the casket was lowered and people started heading back to their cars, Bosch made his way across the lawn to where Margaret remained seated, a folded flag in her lap. She smiled at Bosch as he approached.

He leaned down, kissed her cheek, and squeezed her hand.

“He was,” she said. “And you were one of his favorites. He took great pride in all of the cases you closed.”

Bosch turned and looked down into the grave. John Jack’s box appeared to have been made of stainless steel.

“He picked it,” Margaret said. “He said it looked like a bullet.”

“Better every day. I won’t need this cane much longer.”

“When John Jack had his knees done he said it was a new lease on life. That was fifteen years ago.”

Bosch just nodded. He thought a new lease on life was a little optimistic.

“Are you coming back to the house?” Margaret asked. “There is something there for you. From him.”

Bosch looked at her.

“You’ll see. Something I would give only to you.”

Bosch saw members of the family gathered by a couple of stretch limos in the parking lane. It looked like two generations of children.

“Can I walk you over to the limo?” Bosch asked.

“That would be nice, Harry,” Margaret said.

Bosch had picked up a cherry pie that morning at Gelson’s and that was what had made him late to the funeral. He carried it into the bungalow on Orange Grove, where John Jack and Margaret Thompson had lived for more than fifty years. He put it on the dining room table with the other plates and trays of food.

The house was crowded. Bosch said hellos and shook a few hands as he pushed his way through the knots of people, looking for Margaret. He found her in the kitchen, oven mitts on and getting a hot pan out of the oven. Keeping busy.

She opened a drawer and gave Bosch a spatula and a knife.

“What were you going to give me?” Bosch asked.

“Just hold your horses,” Margaret said. “First cut the pie, then go back to John Jack’s office. Down the hall, on the left. It’s on his desk and you can’t miss it.”

Bosch went into the dining room and used the knife she had given him to cut the pie into eight slices. He then made his way again through the people crowded in the living room to the hallway that led back to John Jack’s home office. He had been there before. Years earlier, when they worked cases together, after a long shift Bosch would often end up at the Thompson house for a late meal prepared by Margaret and a strategy session with John Jack. Sometimes Bosch would take the couch in the home office and sleep a few hours before getting back to work on the case. He even kept spare clothes in the office closet. Margaret always left a fresh towel for him in the guest bathroom.

The door was closed and for some reason he knocked, even though he knew no one should be in there.

He opened the door and entered a small cluttered office with shelves on two walls and a desk pushed up against a third under a window. The couch was still there, across from the window. Sitting on a green blotter on the desk was a thick blue plastic binder with three inches of documents inside.

It was a murder book.

Ballard studied what she could see of the remains with an unflinching eye. The smell of kerosene mixed with that of burned flesh was overpowering this close, but she stood her ground. She was in charge of the scene until the fire experts arrived. The nylon tent had melted and collapsed on the victim. It tightly shrouded the body in places where the fire had not completely burned through. The body seemed to be in repose and she wondered how he could have slept through it. She also knew that toxicity tests would determine his alcohol and drug levels. Maybe he never felt a thing.

Ballard knew it would not be her case but she pulled out her phone and took photos of the body and the scene, including close-ups of the overturned camping heater, the presumed source of the blaze. She then opened the temperature app on the phone and noted that the current temperature listed for Hollywood was 52 degrees. That would go in her report and be forwarded to the Fire Department’s arson unit.

She stepped back and looked around. It was 3:15 a.m. and Cole Avenue was largely deserted, except for the homeless people who had come out of the tents and cardboard shanties that lined the sidewalk running alongside the Hollywood Recreation Center. They stared both wide-eyed and addled as the investigation into the death of one of their own proceeded.

“How’d we get this?” Ballard asked.

Stan Dvorek, the patrol sergeant who had called her out, stepped over. He had worked the late-show shift longer than anybody at Hollywood Division—more than ten years. Others on the shift called him “The Relic,” but not to his face.

“FD called us,” he said. “They got it from communications. Somebody driving by saw the flames and called it in as a fire.”

“They get a name on the PR?” Ballard asked.

“He didn’t give one. Called it in, kept driving.”

Two fire trucks were still on scene, having made the journey just three blocks down from Station 27 to douse the burning tent. The crews were standing by to be questioned.

“I’m going to take the fire guys,” Ballard said. “Why don’t you have your guys talk to some of these people, see if anybody saw anything.”

“Isn’t that arson’s job?” Dvorek asked. “They’re just going to have to reinterview if we find anybody worth talking to.”

“First on scene, Devo. We need to do this right.”

Ballard walked away, ending the debate. Dvorek might be the patrol supervisor but Ballard was in charge of the crime scene. Until it was determined that the fatal fire was an accident she would treat it as a crime scene.

She walked over to the waiting firefighters and asked which of the two crews was first on scene. She then asked the six firefighters assigned to the first truck what they saw. The information she received from them was thin. The tent fire had almost burned itself out by the time the fire-rescue team arrived. Nobody saw anyone around the blaze or nearby in the park. No witnesses, no suspects. A fire extinguisher from the truck had been used to douse the remaining flames, and the victim was pronounced dead and was therefore not transported to a hospital.